A map issued by the Japanese Army in 1936, left, shows Dokdo drawn within Korean territory.
But Japanese scholars have argued that for convenience’s sake, Dokdo was depicted near Korea.
A similar map drawn up the next year, right, directly names Joseon, the name of Korea at the time, where Dokdo was categorized.

This travelogue from the disputed island of Dokdo, also known as Takeshima, was written by a Stratfor analyst traveling in South Korea. 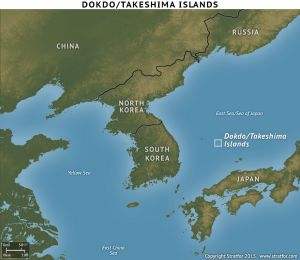 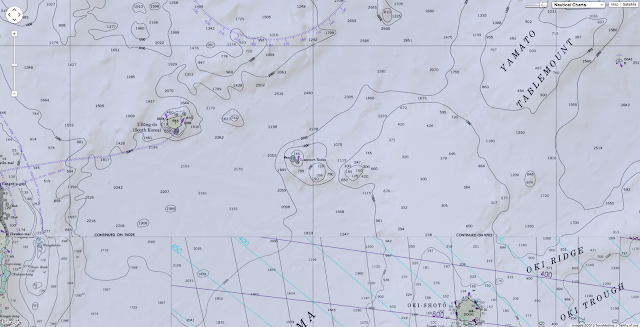 The Liancourt Rocks, also known as Dokdo or Tokto with the GeoGarage platform (NGA chart)

Dokdo is a small island - really a couple of small islands grouped closely together.
Sparsely vegetated, these jagged remnants of an extinct volcano support a local fisherman's family and a contingent of South Korean police officers.
They also lie at the heart of a historical and geographical controversy between South Korea and Japan. Seoul controls the islets and calls them Dokdo.
Tokyo, however, contests that claim and calls them Takeshima.

(North Korea, too, claims Dokdo, but as an extension of its broader claim over all Korea, and Pyongyang does not contest Seoul's active control.)

In spite of the controversy, visiting Dokdo was not difficult, just time-consuming.
The overnight train from Seoul arrived in Jeongdongjin, on the east coast of South Korea, half an hour before sunrise.
In the pre-dawn light it was easy to see the soldiers as they moved in line abreast formation across the beach down to the edge of the sea, undertaking the morning patrol for suspicious activity.
Although we were over 100 kilometers (60 miles) south of the Demilitarized Zone, we were just south of the town of Gangneung.
It was there that in 1996, a North Korean infiltration submarine became stranded offshore and the crew headed inland, eluding South Korean forces for more than a month.

A South Korean flag flies over the disputed island of Dokdo/Takeshima. (Stratfor)

To get to Dokdo, we took the ferry from Gangneung to Ulleungdo, the farthest east of South Korea's larger islands.
From Ulleungdo, weather permitting, it is another hour-and-a-half ferry ride to Dokdo. For South Koreans, journeying to the island is the pinnacle of patriotic tourism.
Once they disembark, flag-waving visitors remain about 40 minutes on the pier on the easternmost of the two main islets.
The eastern islet also has the police guard station and a helipad.
The western islet hosts the home of a local fisherman, the only permanent resident.

From Ulleungdo to Dokdo is 47 nautical miles, and South Korea considers Dokdo within the jurisdiction of Ulleungdo.
Japan considers what it calls "Takeshima" part of the administrative district of the Oki Islands, around 85 nautical miles away.
But Japan will also be quick to note that Takeshima is only 114 nautical miles from Honshu, the main island of Japan, closer than the South Korean mainland, which is 117 nautical miles away.
Tokyo and Seoul both expend major efforts to explain why they are the rightful owners of the disputed island, and each has its own historical maps and charts, documents and records to wield in debate.

At the moment, South Korea undoubtedly controls Dokdo, but Japan is challenging the legality of that occupation.
Also up for debate is whether the set of islets really even constitute an island, or simply a collection of rocks.
The United States and some other nations, after all, call the islands the "Liancourt Rocks."
The difference between an island and a rock may be open to interpretation, but it has important economic and political implications.
With ample fishing and expectations of sub-sea oil, gas and mineral reserves, this is far from a frivolous dispute, or one merely reflecting centuries of animosity and staunch nationalism.
It matters economically.

Maritime agreements, roughly stated, specify that an island must be visible above the surface at high tide and must be habitable or capable of sustaining economic activity.
The designation "island" grants the entity 12 nautical miles of territorial sea and a 322-kilometer exclusive economic zone, and it can be used in designations of continental shelves.
A rock must also be visible above water at high tide, but it does not need to support human habitation or economic activity.
A rock is granted the same 12 nautical miles of territorial sea but not an exclusive economic zone. Dokdo is home to a small population, but most of its water and food supplies (aside from seafood) are imported. South Korea says this proves it is habitable, but others disagree.

Although the competition between South Korea and Japan is in this case rather tame, Asia is littered with disputed islands, reefs, submerged rocks and shoals.
These tensions are much more significant. Chinese public animosity over Japan's claims on the Senkaku Islands (China calls them Diaoyu) triggered riots, looting and caused some Japanese businesses to leave China.
Vietnam and China have already had several military engagements over the Paracel Islands.
Chinese construction projects on several reefs and islets in the Spratly chain in the South China Sea upset the Philippines and prompted objections from Washington.
And the list continues: most Southeast Asian nations claim overlapping portions of the contiguous seas. International law offers only the most dubious help in resolving these disputes.
Geographic designations that are meant to help distinguish between the different types of landmasses are ambiguous.
This only compounds the dizzying array of competing claims.

On the other side of the Eurasian landmass, Europe is rethinking the legitimacy of borders and even the definition of nations, states and sub-nations.
In Asia, land borders may be porous at places, but they are still fairly well-defined.
It is at sea that territorial boundaries are really being reassessed.
Nationalism plays a role, as does economic security.
Nations need to guarantee access to maritime resources and to the vital trade routes throughout the region.
Asia wraps around the East and South China seas, around the Bay of Bengal and the Indian Ocean. And when water is the organizing principle of the continent, the question of who owns an island, rock or reef and even of who is allowed to name a body of water takes on national strategic significance. With a large common sea and nations with an economic ability and necessity to act, maritime competition will only grow more intense.
The flag-waving Korean tourists on Dokdo may seem far less significant than the controversial 3,000-meter (almost 10,000-foot) Chinese runway on Fiery Cross Reef, but it is no less part of a national strategy to secure economic and strategic interests in a rapidly changing region.