Lyubov Orlova to be used for testing marine monitoring system The Lyubov Orlova, a cruise ship abandoned after numerous attempts to tow it south,
is drifting 600 kilometres northeast of St. John’s for ports unknown.
A tracking device was installed on the Orlova (but tracking beacons on the ship have failed)
and it was then decided to let it drift away.

The unknown location of the MV Lyubov Orlova is now being used as a way to test the ability of a new system of marine monitoring called the Global Maritime Awareness system.
Guy Thomas is a retired former science & technology adviser to the U.S. Coast Guard and has been involved in maritime surveillance for more than 40 years.
In 2005 he had an idea that if the countries of the world combined their technologies and everybody banded together, a global maritime awareness system could be established that would allow for greater monitoring of the marine environment.

The Lyubov Orlova anchored in the Bay of Hebron, Labrador

The idea is based on the four types of satellites that exists, says Thomas, each of which offers a different type of data.
The Automatic Identification System (AIS) is an automatic tracking system used on ships as a means of collision avoidance.
It’s used for identifying and locating vessels by electronically exchanging data with other nearby ships.
“It was designed for ships in the immediate vicinity of each other and control points in harbours to be able to reach out and signal to a specific ship,” he says.
Information such as a ship’s position, speed, course and even the captain’s name can be shared back and forth between vessels.
That tried and true method of sharing information lit a spark in Thomas’ mind.
“I had the idea that if you put that receiver in space, you would now have the international identification system for ships that was lacking.”

The Lyubov Orlova has left port. After being delayed a day by a storm, the ship was towed out through the narrows of St. John's harbour on Jan. 23, 2013.
photo : Keith Gosse / The Telegram

That was done and a second satellite system was created that provides radar information from space.
It expanded on the ship-to-ship ability of the initial idea allowing for vessel information to be shared over larger areas.
The third satellite type is probably the one that people are most familiar with — the ones that take pictures.
“There’s been an explosion in that technology in the last five years, as well,” says Thomas.
“From space, now you can routinely see tie downs on holes. You can see anchor chains by links.”
The imaging systems have a big downfall though, he adds.
They can’t operate at night and they don’t operate through clouds. 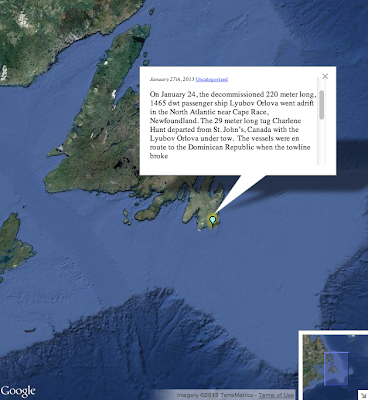 That is the advantage of the radar systems.
They operate in both those conditions.
The fourth type of satellite data involves a small box on ships that sends information to satellites in space.
It tells a ship’s location and even some conditions on the ship.
This became known as Long Range Identification and Tracking or LRIT.
Ships have to report into the governmental authority of any country they’re going to pass within 2,000 miles of, says Thomas.
All ships have to report on LRIT four times a day and companies use it to track their assets on ships.
Those four satellite systems, combined, Thomas says they would make for a very effective tool of monitoring marine environments for illegal activity, including such things as polluting and smuggling.
“If you meld those together you could come up with a system to allow you to improve security of your shores,” says Thomas.

So how does the drifting Lyubov Orlova fit into all this? 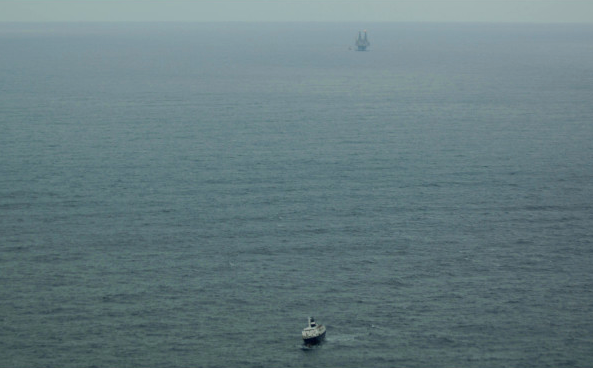 Well, it’s a dead ship who’s location is unknown and even with the knowledge of current patterns, it’s a big ocean out there.
Using a combination of the types of satellite information available will test the notion that cooperating and sharing technologies will result in a Global Maritime Awareness system far superior than any individual system.

Thomas, who lives in Baltimore, actually saw the Orlova tied to the wharf in St. John’s while he was  here December past giving a presentation to the National Research Council’s Institute for Ocean Technology on his idea for a Global Maritime Awareness system.
However, he found out about the ship’s current state of affairs through the Irish Coast Guard, with whom he also has dealings.
Thomas says that Chris Reynolds, the director of the Irish Coast Guard, had mentioned to Thomas that he had serious concerns about a dead Russian cruise ship that was heading toward his country from Canada, and that he didn’t want his country to bear the burden of it coming aground in Ireland.

Thomas suggested they use his method of combining different satellite data to find the location of the ship.
Of course, the drifting Orlova isn’t going to be sending signals to satellites the way an active ship would be, but sometimes what a ship doesn’t send out lets you track it too, says Thomas.
If they know they’re are so many ships in an area from a satellite image and they can tell one of those ships isn’t transponding through the AIS system, then that’s a little curious, he says.
They’ll find the Orlova by scratching out the vessels that are sending out data through the satellite systems.
You’re left with the dead ship.
It’s a process of elimination and it works in keeping the marine environment safe from illegal activity, too, says Thomas, since those ships breaking the law won’t be responding either because they don’t want to be tracked.
They want their location to be as mysterious as that currently of the Lyubov Orlova.

“It’s the fellas that aren’t transponding that you want to look at,” he says. “AIS tells you where the good guys are. AIS tells you where the guys who are obeying the law are.”
Thomas is now in collaboration with the Irish Coast Guard to track the ship through these methods. They know the last position of the Orlova as taken by Transport Canada before the vessel went A.W.O.L. and by studying ocean currents, they can come up with an idea of where they think the vessel might be.
Then, by using various types of satellite information, they can get a read on how many ships are in that area and if any aren’t transponding.

The challenge was not just taken up the Irish but also by an Italian company called e-Geos, which specializes in Earth observation and in geo-spatial application.
They, too, took the last location of the Orlova, and by taking ocean currents into consideration came up with a location, they felt should be where the ship is located.
Then they got a satellite image of the area.
And they got a hit.
There’s something they found south southeast from the tip of Greenland, says Thomas, that has some probability of being the Orlova, though that’s not written in stone as of yet.
The company is going to get more images over the next few days to see if they’re really onto something.

Regardless if this it or if they have to have to keep searching, Thomas is confident in his method working and working punctually.
“We are going to find it. Before it ever approaches Ireland we will be able to tell the various navies where it is,” he says.
His plan then is to also give the location to the ship’s owner, Reza Shoeybi.