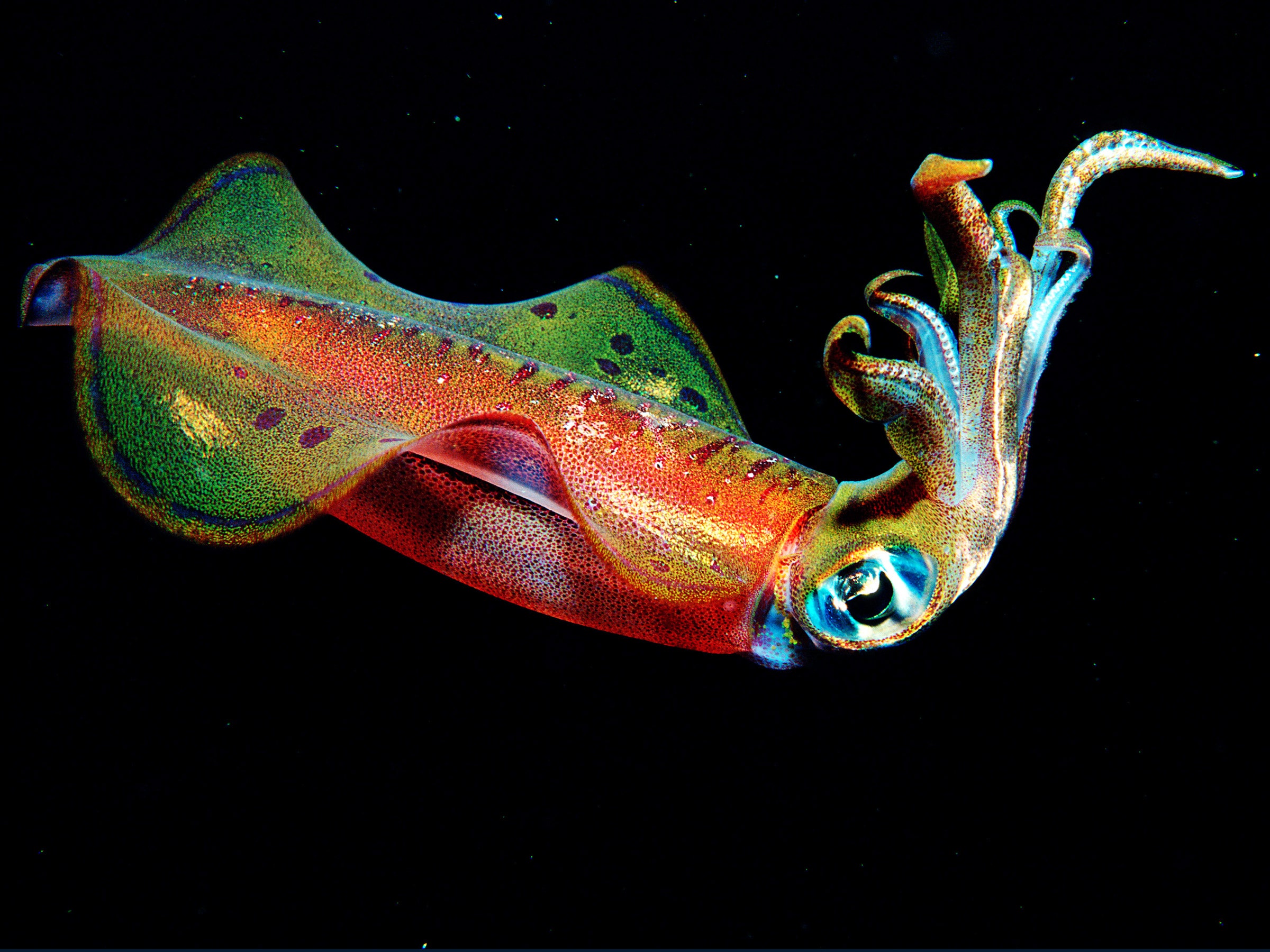 The oval squid.
Science Source
From Wired by Anna Vlasits
Once they get over being creeped out, maybe scientists will figure out what cephalopods are saying.
Squid use a remarkable array of skin patterns to communicate.
How? It's all a matter of getting inside their heads.
Squid and their cephalopod brethren have been the inspiration for many a science fiction creature.
Their slippery appendages, huge proportions, and inking abilities can be downright shudder-inducing. (See: Arrival.)
But you should probably be more concerned by the cephalopod’s huge brain---which not only helps it solve tricky puzzles, but also lets it converse in its own sign language.

Right now, you're probably imagining twisted tentacles spelling out creepy cephalopod communiqués.
But it's not that: Certain kinds of squid send messages by manipulating the color of their skin. "Their body patterning is fantastic, fabulous,” says Chuan-Chin Chiao, a neuroscientist at National Tsing Hua University in Taiwan.
They can display bands, or stripes, or turn completely dark or light. And Chiao is trying to crack their code.
Chiao got his inspiration from physiologist B. B. Boycott, who in the 1960s showed that the cuttlefish brain was the control center for changing skin color.
Boycott copied his technique from neurosurgeon Wilder Penfield, who treated epilepsy patients by burning out the misbehaving bits of their brains.
While their grey matter was exposed for surgery, Penfield* *also applied a gentle current through the electrodes in his patients’ brains. You know, just to see what would happen.

A zap in one spot above the ears caused a tingle in the left hand. In another spot, tingles in the leg. And so Penfield discovered that the sensory cortex is a homunculus, with specific brain areas mapping onto different parts of your body.
Over time, scientists tried the electrical stimulation technique on all kinds of animals---including Boycott's cuttlefish.

Chiao tried out the same thing in a related cephalopod, the oval squid---but he took it to the next level.
In a paper published in the Journal of Neuroscience in January, he describes putting electrodes in a bunch of different parts of the optic lobe, stimulating them, and recording the resulting body patterns.
"Those optic lobes are the mystery of the cephalopod nervous system," says Roger Hanlon, a marine biologist at the Marine Biological Laboratory at Woods Hole.

When Chiao started out, he thought the optic lobe would be organized like the human cortex, with the pigment on different body parts correlating with different locations in the brain: a squidunculus.
Not so.
“When we finished the experiment," says Chiao, "we looked at the data and it was really puzzling." He'd poke in the left part of the optic lobe, and the squid’s mantle would turn black.
Then, he'd poke in the right region---and the same thing would happen.
It seemed like the squid's body parts were represented in more than one spot in the optic lobe.

After Chiao and his student Tsung-Han Liu had stared at the data for a long time, a hypothesis began to emerge. The squid’s pigment cells are surrounded by muscles that stretch the pigment cells out or let them curl up. Instead of controlling body parts, the optic lobe controls those muscles. When Chiao stimulated in one spot, the squid’s mantle turned dark. Another spot, the mantle got thick, horizontal stripes. Another, the mantle got one thin vertical stripe.

Each part of the body has its own patterns, so a squid can simultaneously have polka dot fins, dark tentacles, and a stripy mantle.
It’s like the squid has an alphabet of patterns---14 by Chiao's count---which repeat in a mosaic within the optic lobe. It's like if your keyboard had hundreds of keys, but still only 26 letters.
That redundancy, Chiao hypothesizes, is how the squid can execute a new combination as quickly as once a second.

Eventually, scientists will make an even more detailed map of what each individual neuron is doing in this brain area.
Hanlon's excited for that day, especially because the squid brain appears to be so different from vertebrate brains.
"Their body plan is so bizarre compared to ours that it’s hard to compare their brain structure and function to something that we know," he says.

And for now, Chiao wants to know what different combinations of pigment patterns might mean to an onlooking squid.
He's recording the patterns that squid take on when they're together and correlating them to their behavior, like mating and male-on-male aggression.
Perhaps soon he’ll find out whether squid are having complex discussions about squid politics, or (more likely) just figuring out who has the bigger mantle.
Strange and unusual life inhabits the plankton rich seas of the underwater kelp forests.
Watch this short video from BBC natural history series The Blue Planet to see the mating habits of amazing colour changing squid and the weird movements of the aptly named hand fish
Posted by geogarage at 1:47 AM