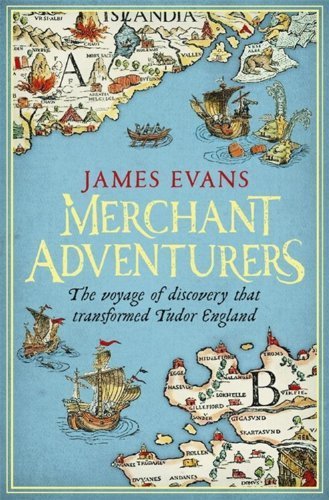 In the spring of 1553 three ships sailed north-east from London into uncharted waters.
The scale of their ambition was breathtaking.
Drawing on the latest navigational science and the new spirit of enterprise and discovery sweeping the Tudor capital, they sought a northern passage to Asia and its riches.
The success of the expedition depended on its two leaders: Sir Hugh Willoughby, a brave gentleman soldier, and Richard Chancellor, a brilliant young scientist and practical man of the sea.
When their ships became separated in a storm, each had to fend for himself.
Their fates were sharply divided.
One returned to England, to recount extraordinary tales of the imperial court of Tsar Ivan the Terrible.
The tragic, mysterious story of the other two ships has to be pieced together through the surviving captain's log book, after he and his crew became lost and trapped by the advancing Arctic winter.
This long neglected endeavour was one of the boldest in British history, and its impact was profound. Although the 'merchant adventurers' failed to reach China as they had hoped, their achievements would lay the foundations for England's expansion on a global stage.
As James Evans' vivid account shows, their voyage also makes for a gripping story of daring, discovery, tragedy and adventure.
-From the dust jacket

The 1553 expedition, undertaken in an attempt to find a new, shorter route to China and its riches, saw Sir Hugh Willoughby and his crew skirt through the icy seas around the top of Norway and along Asia’s northern rim.

The pioneering voyage ultimately led to the discovery of the White Sea and a new trade route to Russia, and helped to build cultural and diplomatic relations between England and the court of Ivan the Terrible in Russia.

In Merchant Adventurers: The Voyage That Launched Modern England, Evans explores the first major advances in maritime navigation, and the Tudor masters of cartography.
Here, writing for History Extra, he reveals eight things a Tudor crew would have needed to do if they hoped to survive the journey… Mid-Tudor ships were evolving, and becoming better suited to long distance navigation.
But unlike modern sailing ships, most had square sails.
While these had advantages, sailing into the wind was not one of them.
Tacking was laborious, and there was much less flexibility in the direction travelled.

Often ships were stuck at port, ‘tarrying for the wind’, or they switched destination.
For the men of 1553 it was a huge frustration: they knew the window of the Arctic summer was narrow, and they desperately wanted to head north.
But for weeks they were pinned to the east coast of England, fretting over ‘great loss and consuming of time’.

When crossing large oceans such as the Atlantic, winds were governed by seasonal patterns, and familiarity with these helped sailors enormously because routes could be designed accordingly.

2) Don’t fall ill or get injured

Illness was little understood in Tudor England, and medical help could be as dangerous as the condition that necessitated it.

A ‘surgeon’ formed part of the crew only on a large ship.
He wasn’t bad at removing foreign objects, like splinters.
He could stitch open wounds, or ‘debride’ (remove dead tissue).
And he could amputate using a tourniquet to reduce blood loss (without anaesthetic).

Some suspected that cleanliness aided recovery – through observation rather than understanding of infection.
Nevertheless, painless surgery this was not.

Faced with other illnesses, surgeons were helpless.
Infectious diseases could play havoc with a crew, and there was little option other than to deposit affected men on shore and hope the malady did not spread.

Diet in Tudor England was terrible for plenty of people, but life on board was worse.
Much food was simply unpleasant.
Supplies included staples like butter, cheese, beans, oatmeal and biscuit, or barrelled beef (“of a most loathsome and filthy taste and savour”, according to one sailor).

There was a reason crews chased wildlife when they could: people were less fastidious than we are today about which animals to eat.
So, in 1553 it was seabirds – puffins, or cormorants – that were stuffed hungrily into the hold.
But it could be anything: seals, whales, turtles, or even penguins.

Few expected what we today call a ‘balanced diet’.
Months at sea meant deficiencies, and scurvy was a notorious problem.
Lack of vitamin C caused lethargy, joint pain and gum disease, then fever, convulsions and death.
It was vital to eat fruit and vegetables when possible, as a few unusually caring captains – like James Lancaster on the first East India voyage – gleaned from intelligent guesswork before the link was understood. Discipline was harsh on a Tudor ship.
Rules and punishment were still based on the old ‘Laws of Oléron’ – written on parchment, and nailed to the mast.
A murderer was strapped to his victim and flung overboard.
For theft, dishonourable discharge was followed by traditional punishment.

In the case of Thomas Nash, accused in 1553 of petty theft, this involved being ‘ducked at the yard arm’ – bound then hoisted and plunged into the sea until almost drowned.
Offenders might also be ‘keel-hauled’: dragged under the ship from one side to the other.

Efforts were made to keep order.
Sebastian Cabot forbade “blasphemy of God, or detestable swearing”; “ribaldry, filthy tales, or ungodly talk”, as well as “dicing, carding, tabling” and other “devilish games”.
These could lead to strife, brawling and even murder, and cause disaster by provoking “God’s most just wrath, and sword of vengeance”.

The boundary between piracy and ‘normal’ seafaring was hazier in 16th-century Europe than it is today.
The same men might trade on one voyage, then attack a tempting target on another.

‘Privateering’, as this was called when authorised against ships of an enemy nation, was simply permitted piracy.
Pirate captains were the people a country needed in time of war – brave, remorseless, good sailors – so they were unlikely to be treated too harshly.
And corrupt officials would always turn a blind eye in return for a slice of the loot.

The best means of avoiding risk was to sail well armed, well manned and in convoy (a lone target was more vulnerable).
The reduction of crew to save money was regarded as “a perilous and foolish thrift”.

We might think the country has always been home to natural sailors, but it isn’t true.
Navigation by celestial bodies was slow to catch on in England.

In England ‘ancient masters of ships’ were usually illiterate.
They stuck to short routes, and tried to keep the coast in view.
They were contemptuous of foreign sailors, with their new-fangled instruments, and of them “that busied themselves with charts”.

Richard Chancellor, chief pilot in 1553, was the first of a new breed: an English sailor who was practical and intellectual.
Not only was he literate, he studied maths and astronomy, and he built instruments to measure the sun and the stars.
Although he died young, his influence lived on, not least in the persons of men like Stephen and William Borough, who sailed with him.

Knowing how to navigate was no guarantee of safety.
And while men could calculate their latitude, no one could measure longitude, but it helped.
It was no coincidence that of three ships that sailed in 1553, it was Chancellor’s that returned to tell the tale. Surprisingly few Tudor-era sailors knew how to swim.
It wasn’t an unknown skill, but nor was it common.
In some cases there was a strong superstition against learning: to fall in and survive was felt to deprive sea gods of a body to which they were entitled, and for which retribution would be exacted from the entire crew.

Contact with the New World had increased awareness of men who could swim, though Cabot still warned his crews against attacks by people who did.

Perhaps most of all, those on board a Tudor ship needed to be lucky.
Sailing was a desperately dangerous business, even when not many, in any walk of life, could expect to live long by modern standards.
Few sailors, wrote the Tudor historian Richard Hakluyt, lived to ‘grey hairs’.
It could easily happen that, as with Chancellor’s own son, shipwreck could mean curtains at the outset of one’s career – as a young teenager, before there was any chance to progress.