Following his Academy Award® nominated film The Theory of Everything, James Marsh directs the incredible true story of Donald Crowhurst (Colin Firth), an amateur sailor who competed in the 1968 Sunday Times Golden Globe Race in the hope of becoming the first person in history to single-handedly circumnavigate the globe without stopping.
With an unfinished boat and his business and house on the line, Donald leaves his wife, Clare (Rachel Weisz) and their children behind, hesitantly embarking on an adventure on his boat the Teignmouth Electron.
The story of Crowhurst's dangerous solo voyage and the struggles he confronted on the epic journey while his wife Clare and their family awaited his return is one of the most enduring mysteries of recent times.

The somewhat dispiriting real-life story of Donald Crowhurst, the amateur sailor who in 1968-9 lost his pride, his mind and then his life in a single-handed yacht race to circumnavigate the world, has long exerted a fascination for film-makers. 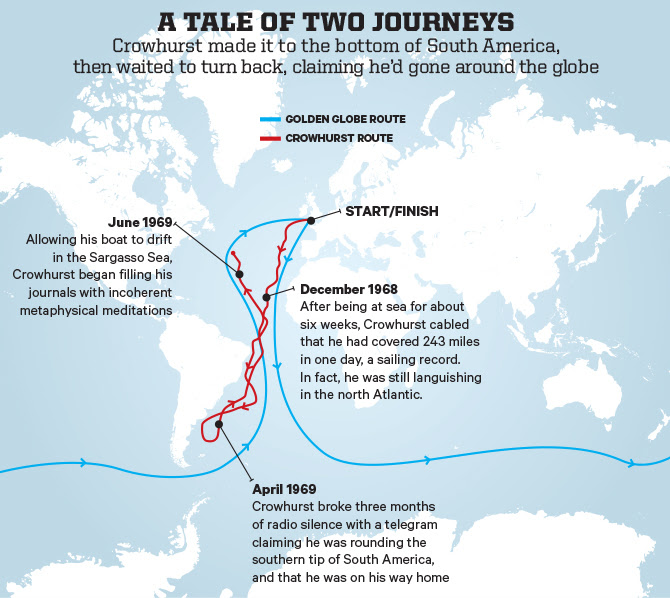 Nicolas Roeg once tried to film the story.
In 2006, the documentary Deep Water explored the tragedy.
And this big-budget take on the tale, buoyed up by the star power of Colin Firth and Rachel Weisz, was made at the same time as a smaller rival project, Crowhurst by Simon Rumley.


Deep Water is a documentary film, directed by Jerry Rothwell and Louise Osmond, produced by Jonny Persey.
It is based on the true story of Donald Crowhurst and the 1969 Sunday Times Golden Globe Race round the world alone in a yacht.
'"We are all human beings and we all have dreams."
Deep Water, beautifully narrated by Tilda Swinton, is a moving and totally absorbing account of one man who gets in over his head both physically and morally.
The small boat becomes a microcosm for life where a person has to find their own rules.
Crowhurst's journey is not the journey of Sunday Times heroes, but of a man.
His dilemma is dangerously easy to identify with.
This is an incredibly moving story - if you don't already know the historical details, do see the film first.

One can see the attraction of the story to director James Marsh: Crowhurst (Firth) has a similar maverick eccentricity and forceful self-belief to that of high-wire walker Philippe Petit, the subject of his documentary Man on Wire.
But for all its technical prowess – the sound design, all groaning metal and hectoring waves, is particularly effective – this account of inexorably crushed dreams is kind of a downer.

Unlike the steely resilience in the face of disaster of Robert Redford’s character in All Is Lost, watching Crowhurst slowly crack is the cinema equivalent of filling your pockets with pebbles and chucking yourself into the Solent.