New research published on Monday finds there is so much wind energy potential over oceans that it could theoretically be used to generate “civilization scale power” — assuming, that is, that we are willing to cover enormous stretches of the sea with turbines, and can come up with ways to install and maintain them in often extreme ocean environments.

It’s very unlikely that we would ever build out open ocean turbines on anything like that scale — indeed, doing so could even alter the planet’s climate, the research finds.
But the more modest message is that wind energy over the open oceans has large potential — reinforcing the idea that floating wind farms, over very deep waters, could be the next major step for wind energy technology.

“I would look at this as kind of a greenlight for that industry from a geophysical point of view,” said Ken Caldeira of the Carnegie Institution for Science in Stanford, Calif.
The study, in the Proceedings of the National Academy of Sciences, was led by Carnegie researcher Anna Possner, who worked in collaboration with Caldeira.

An offshore wind farm stands in the water near the Danish island of Samso, May 19, 2008. Reuters/Bob Strong

The study takes, as its outset, prior research that has found that there’s probably an upper limit to the amount of energy that can be generated by a wind farm that’s located on land.
The limit arises both because natural and human structures on land create friction that slows down the wind speed, but also because each individual wind turbine extracts some of the energy of the wind and transforms it into power that we can use — leaving less wind energy for other turbines to collect.

“If each turbine removes something like half the energy flowing through it, by the time you get to the second row, you’ve only got a quarter of the energy, and so on,” explained Caldeira.

The ocean is different.
First, wind speeds can be as much as 70 percent higher than on land.
But a bigger deal is what you might call wind replenishment.
The new research found that over the mid-latitude oceans, storms regularly transfer powerful wind energy down to the surface from higher altitudes, meaning that the upper limit here for how much energy you can capture with turbines is considerably higher.

The study compares a theoretical wind farm of nearly 2 million square kilometers located either over the U.S. (centered on Kansas) or in the open Atlantic.
And it finds that covering much of the central U.S. with wind farms would still be insufficient to power the U.S. and China, which would require a generating capacity of some 7 terawatts annually (a terawatt is equivalent to a trillion watts).

But the North Atlantic could theoretically power those two countries and then some.
The potential energy that can be extracted over the ocean, given the same area, is “at least three times as high.”

It would take an even larger, 3 million square kilometer wind installation over the ocean to provide humanity’s current power needs, or 18 terawatts, the study found.
That’s an area even larger than Greenland.

Hence, the study concludes that “on an annual mean basis, the wind power available in the North Atlantic could be sufficient to power the world.”


It is not just utility companies racing to respond to the rise of renewable energy.
Oil and gas giant Statoil is building on four decades of offshore experience to erect its first floating wind farm.

But it’s critical to emphasize that these are purely theoretical calculations.
They are thwarted by many practical factors, including the fact that the winds aren’t equally strong in all seasons, and that the technologies to capture their energy at such a scale, much less transfer it to shore, do not currently exist.

Oh, and then there’s another large problem: Modeling simulations performed in the study suggest that extracting this much wind energy from nature would have planetary-scale effects, including cooling down parts of the Arctic by as much as 13 degrees Celsius.

“Trying to get civilization scale power out of wind is a bit asking for trouble,” Caldeira said.
But he said the climate effect would be smaller if the amount of energy being tapped was reduced down from these extremely high numbers, and if the wind farms were more spaced out across the globe."
“I think it lends itself to the idea that we’re going to want to use a portfolio of technologies, and not rely on this only,” said Caldeira.

Energy gurus have long said that among renewable sources, solar energy has the greatest potential to scale up and generate terawatt-scale power, enough to satisfy large parts of human energy demand.
Caldeira doesn’t dispute that.
But his study suggests that at least if open ocean wind becomes accessible someday, it may have considerable potential too. 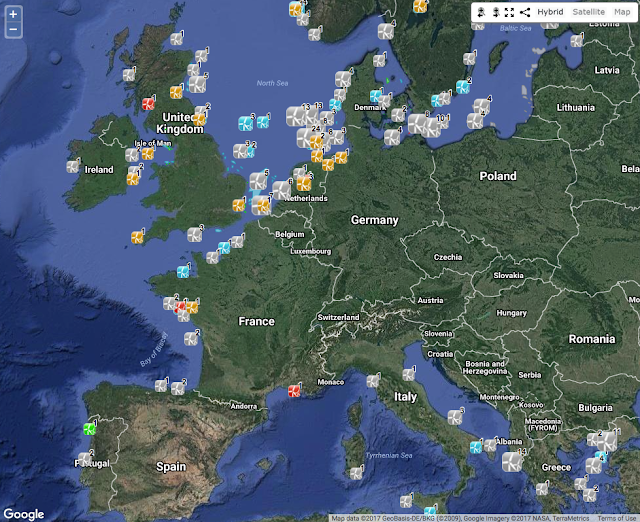 Alexander Slocum, an MIT mechanical engineering professor who has focused on offshore wind and its potential, and who was not involved in the research, said he considered the paper a “very good study” and that it didn’t seem biased.

“The conclusion implied by the paper that open ocean wind energy farms can provide most of our energy needs is also supported history: as a technology gets becomes constrained (e.g., horse drawn carriages) or monopolized (OPEC), a motivation arises to look around for alternatives,” Slocum continued by email.
“The automobile did it to horses, the U.S. did it to OPEC with fracking, and now renewables are doing it to the hydrocarbon industry.”

“The authors do acknowledge that considerable technical challenges come into play in actually harvesting energy from these far off-shore sites, but I appreciate their focus on the magnitude of the resource,” added Julie Lundquist, a wind energy researcher at the University of Colorado, Boulder.
“I hope this work will stimulate further interest in deep water wind energy.”

Underscoring the theoretical nature of the calculations, Lundquist added by email that “current and foreseeable wind turbine deployments both on- and off-shore are much smaller than would be required to reach the atmospheric energy limitations that this work and others are concerned with.”

The research points to a kind of third act for wind energy.
On land, turbines are very well established and more are being installed every year.
Offshore, meanwhile, coastal areas are now also seeing more and more turbine installations, but still in relatively shallow waters.

But to get out over the open ocean, where the sea is often well over a mile deep, is expected to require yet another technology — likely a floating turbine that extends above the water and sits atop some kind of very large submerged floating structure, accompanied by cables that anchor the entire turbine to the seafloor.


Each wind turbine is taller than Big Ben and the farm can power 20,000 homes.

Experimentation with the technology is already happening: Statoil is moving to build a large floating wind farm off the coast of Scotland, which will be located in waters around 100 meters deep and have 15 megawatts (million watts) of electricity generating capacity.
The turbines are 253 meters tall, but 78 meters of that length refers to the floating part below the sea surface.

“The things that we’re describing are likely not going to be economic today, but once you have an industry that’s starting in that direction, should provide incentive for that industry to develop,” said Caldeira.