Sea Machines is pleased to announce the launch of the Sea Machines 300 autonomy system for commercial workboats.
It enables remote & autonomous command of a vessel, enabling enhancements in operability & safety.

From Phys by Matt O'Brien

The …more Self-driving cars may not hit the road in earnest for many years - but autonomous boats could be just around the pier.
Spurred in part by the car industry's race to build driverless vehicles, marine innovators are building automated ferry boats for Amsterdam canals, cargo ships that can steer themselves through Norwegian fjords and remote-controlled ships to carry containers across the Atlantic and Pacific.

The first such autonomous ships could be in operation within three years.
One experimental workboat spent this summer dodging tall ships and tankers in Boston Harbor, outfitted with sensors and self-navigating software and emblazoned with the words "Unmanned vessel" across its aluminum hull.
"We're in full autonomy now," said Jeff Gawrys, a marine technician for Boston startup Sea Machines Robotics, sitting at the helm as the boat floated through a harbor channel.
"Roger that," said computer scientist Mohamed Saad Ibn Seddik, as he helped to guide the ship from his laptop on a nearby dock.
The boat still needs human oversight.
But some of the world's biggest maritime firms have committed to designing ships that won't need any captains or crews—at least not on board. 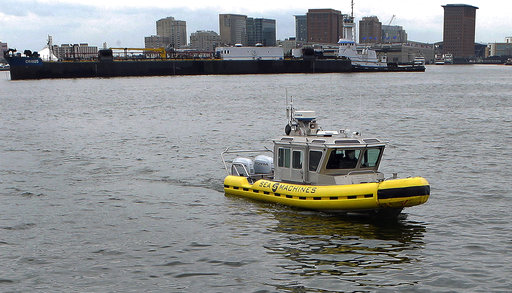 In this Tuesday, Aug. 15, 2017 photo, a boat capable of autonomous navigation makes its way around Boston Harbor.
The experimental workboat spent this summer dodging tall ships and tankers, outfitted with sensors and self-navigating software and emblazoned with the words "UNMANNED VESSEL" across its aluminum hull.
(AP Photo/Steven Senne)

The ocean is "a wide open space," said Sea Machines CEO Michael Johnson.
Based out of an East Boston shipyard once used to build powerful wooden clippers, the cutting-edge sailing vessels of the 19th century, his company is hoping to spark a new era of commercial marine innovation that could surpass the development of self-driving cars and trucks.
The startup has signed a deal with an undisclosed company to install the "world's first autonomy system on a commercial containership," Johnson said this week.
It will be remotely-controlled from land as it travels the North Atlantic.
He also plans to sell the technology to companies doing oil spill cleanups and other difficult work on the water, aiming to assist maritime crews, not replace them.

Johnson, a marine engineer whose previous job took him to the Italian coast to help salvage the sunken cruise ship Costa Concordia, said that deadly 2012 capsizing and other marine disasters have convinced him that "we're relying too much on old-world technology." 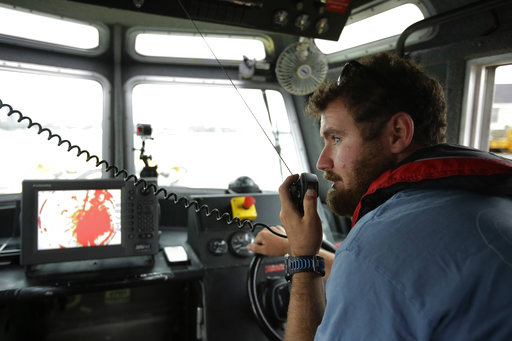 In this Tuesday, Aug.15, 2017 photo, Jeff Gawrys, marine technician for Boston startup Sea Machines Robotics, prepares to disengage the navigation of a boat and switch the vessel over to fully autonomous control in Boston Harbor.
(AP Photo/Steven Senne)

Spurred on by the car industry's race to build driverless vehicles, maritime companies are taking advantage of technological breakthroughs and broader public acceptance of artificial intelligence to design tugboats, ferries and cargo vessels that won't need captains or crews, at least not on board. 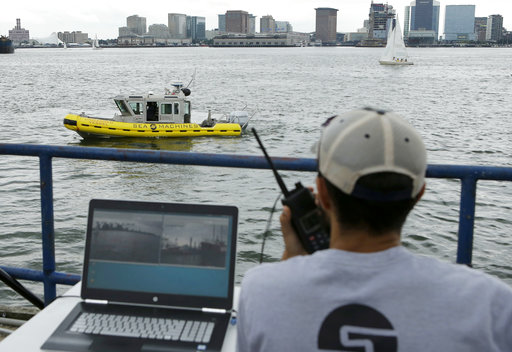 In this Aug.15, 2017 photo, computer scientist Mohamed Saad Ibn Seddik, of Sea Machines Robotics, uses a laptop to guide a boat outfitted with sensors and self-navigating software and capable of autonomous navigation in Boston Harbor.

Militaries have been working on unmanned vessels for decades.
But a lot of commercial experimentation is happening in the centuries-old seaports of Scandinavia, where Rolls-Royce demonstrated a remote-controlled tugboat in Copenhagen this year.
Government-sanctioned testing areas have been established in Norway's Trondheim Fjord and along Finland's western coast.
In Norway, fertilizer company Yara International is working with engineering firm Kongsberg Maritime on a project to replace big-rig trucks with an electric-powered ship connecting three nearby ports.
The pilot ship is scheduled to launch next year, shift to remote control in 2019 and go fully autonomous by 2020.
"It would remove a lot of trucks from the roads in these small communities," said Kongsberg CEO Geir Haoy. 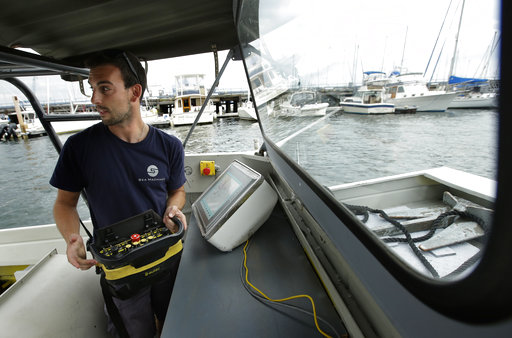 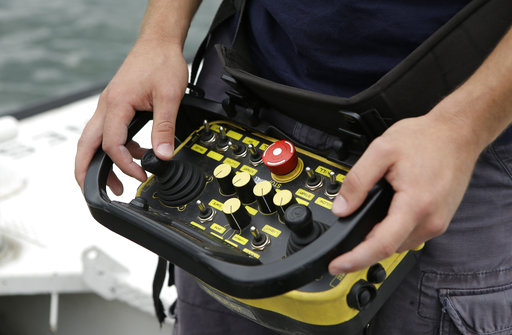 Frank Marino with Sea Machines Robotics uses a remote control belt pack to operate a boat in Boston Harbor.
Spurred on by the car industry's race to build driverless vehicles, maritime companies are taking advantage of technological breakthroughs and broader public acceptance of artificial intelligence to design tugboats, ferries and cargo vessels that won't need captains or crews, at least not on board. (AP Photo/Steven Senne)

Spurred on by the car industry's race to build driverless vehicles, maritime …more Japanese shipping firm Nippon Yusen K.K.—operator of the cargo ship that slammed into a U.S.
Navy destroyer in a deadly June collision—plans to test its first remote-controlled vessel in 2019, part of a wider Japanese effort to deploy hundreds of autonomous container ships by 2025.
A Chinese alliance has set a goal of launching its first self-navigating cargo ship in 2021.

The key principles of self-driving cars and boats are similar.
Both scan their surroundings using a variety of sensors, feed the information into an artificial intelligence system and output driving instructions to the vehicle.
But boat navigation could be much easier than car navigation, said Carlo Ratti, an MIT professor working with Dutch universities to launch self-navigating vessels in Amsterdam next year.
The city's canals, for instance, have no pedestrians or bikers cluttering the way, and are subject to strict speed limits.
Ratti's project is also looking at ways small vessels could coordinate with each other in "swarms." They could, for instance, start as a fleet of passenger or delivery boats, then transform into an on-demand floating bridge to accommodate a surge of pedestrians.
Spurred on by the car industry's race to build driverless vehicles, maritime companies are …more Since many boats already have electronic controls, "it would be easy to make them self-navigating by simply adding a small suite of sensors and AI," Ratti said.

Researchers have already begun to design merchant ships that will be made more efficient because they don't need room for seamen to sleep and eat.
But in the near future, most of these ships will be only partly autonomous.
Armchair captains in a remote operation center could be monitoring several ships at a time, sitting in a room with 360-degree virtual reality views.
When the vessels are on the open seas, they might not need humans to make decisions.
It's just the latest step in what has been a gradual automation of maritime tasks.
"If you go back 150 years, you had more than 200 people on a cargo vessel.
Now you have between 10 and 20," said Oskar Levander, vice president of innovation for Rolls-Royce's marine business.

There are still some major challenges ahead.
Uncrewed vessels might be more vulnerable to piracy or even outright theft via remote hacking of a ship's control systems.
Some autonomous vessels might win public trust faster than others; unmanned container ships filled with bananas might not raise the same concerns as oil tankers plying the waters near big cities or protected wilderness.
A decades-old international maritime safety treaty also requires that "all ships shall be sufficiently and efficiently manned."
But The International Maritime Organization, which regulates shipping, has begun a 2-year review of the safety, security and environmental implications of autonomous ships.