Who’s driving that boat? No one

From Boston Globe by Janelle Nanos

As the hulking gray vessel sluiced through Boston Harbor, all of the elements were in place for a stunning day at sea: clear blue skies, a light breeze, and calm waters.
The only thing missing was a driver.
A warning was painted on the side to explain the absence of a captain, in big red letters: “Unmanned vessel.”
It prompted a few double takes from slack-jawed boaters.

The era of autonomy is upon us, with driverless cars, airborne drones, and robot vacuums programmed to seek out and destroy dust bunnies.
So perhaps it’s inevitable that maritime engineers are beginning to develop unmanned boats for commercial use as a safer, cheaper alternative to having humans steer vessels into dangerous situations.
But just as driverless cars have raised safety concerns — most recently after the death of a man using Autopilot in his Tesla — the prospect of building unmanned ships comes with challenges.

Sea Machines' Remote Command System, called RC NXT, provides PLC-based wireless control of a vessel and is well suited for day-vessel operations such as work boats, tugs, and launches operating within 1000m of the pilot.
Sea Machines' Autonomous Navigation System, called DP NXT, uses vessel-based sensors and proprietary algorithms to give the watercraft a degree of self-awareness, enabling her to efficiently self-motor from point-to-point while avoiding active & passive obstacles or collaborate in tandem with another vessel.

The boat turning heads in the harbor earlier this month was a prototype created by an East Boston startup called Sea Machines.
Its team is developing the technology to help convert ships into drones that can be controlled remotely by their captains or programmed to operate autonomously, patrolling harbors for security purposes, or ferrying cargo back and forth.
They’re targeting the commercial maritime market, hoping that tugboat operators, oil rig overseers, and fishery mangers might want to add a robotic mate to the crew.
“If you look back to the 1700 and 1800s, the marine and shipbuilding space was really the Silicon Valley of the time. Some of the brightest engineers and the latest technology was going into those vessels,” said Sea Machines’s Michael Johnson as his cofounder, Alex Lorman, maneuvered the 24-foot boat off the dock in East Boston, using a remote control the size of a toaster.
The cofounders met while responding to the wreck of the Italian luxury ocean liner Costa Concordia after it ran aground in 2012.
While working to salvage what they could from the sinking ship, Lorman witnessed a crowded mess of boats zigzagging through the shallow waters, each with its own crew, he said.
“They were doing repetitive tasks that could easily be automated,” he said. A drone boat, they realized, would be far more efficient.

He and Johnson developed the company’s technology with the help of Jaybridge Robotics, a Cambridge autonomous-vehicle design shop that was recently acquired by Toyota as part of its push into the driverless car market.
They are now building the company through the MassChallenge accelerator and hoping that the technology will provide an alternative for dangerous maritime situations.
Tugboats, for example, are tasked with helping to maneuver hulking oil tankers as they enter a harbor, work so risky that it at times can be fatal.

Jeff Bartkowski of Sea Machines took the helm of a chase boat while a colleague controlled one of the company’s unmanned vessels during a test run in Boston Harbor.
Barry Chin / Globe staff

This concept isn’t exactly new on the open ocean.
Marine scientists at places like the Woods Hole Oceanographic Institution have developed remotely operated underwater vehicles that allow them to explore the floor of the sea from the deck of a ship.

DARPA’s Anti-Submarine Warfare (ASW) Continuous Trail Unmanned Vessel (ACTUV) program has designed, developed and constructed an entirely new class of ocean-going vessel—one intended to traverse thousands of kilometers over the open seas for months at a time, all without a single crew member aboard.
The ACTUV technology demonstration vessel was recently transferred to water at its construction site in Portland, Ore., and conducted speed tests in which it reached a top speed of 27 knots (31 mph/50 kph).
The vessel is scheduled to be christened on April 7, 2016, with open-water testing planned to begin in summer 2016 off the California coast.

And the Navy has been using its own forms of automated vessels for over two decades, first for target practice, then for military drills, said Larry Dickerson, an unmanned systems analyst for the Forecast International aerospace and defense firm.
“The market is very much in its infancy, but it’s starting to get more attention,” Dickerson said.

He estimates that driverless boats are a $6 billion industry, which might explain why major players like Rolls-Royce are hopping on board.
In March, the company unveiled plans to develop a land-based control center that would need only a dozen people to orchestrate the movements of an entire a fleet of cargo ships as they carry goods around the world.
“Autonomous shipping is the future of the maritime industry,” Mikael Makinen, president of Rolls-Royce’s marine division, said at the time of the launch.
“As disruptive as the smartphone, the smart ship will revolutionize the landscape of ship design and operations.” 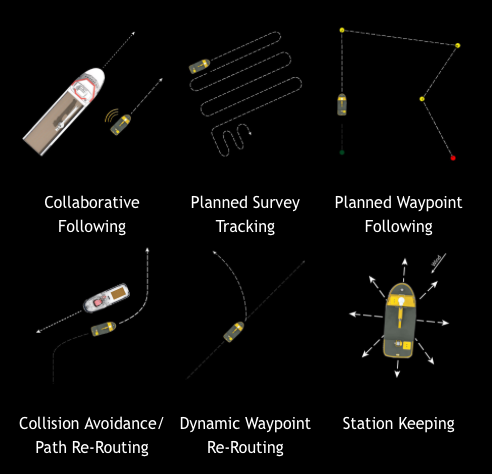 But unmanned surface vessels, or USVs, are starting conversations about how autonomous boats would fit into the rules of the sea, many of which have been established for centuries.

Earlier this month, Lloyd’s Register, the UK-based organization that works to classify ship construction standards, outlined its first autonomy levels for cyber-enabled designs.
They range from crafts that are manual and rely entirely on humans to the most tech-savvy vessels that can operate without any human supervision at all.

And while he doesn’t expect completely autonomous ships to be out on the water in the next few years, getting protocols in place is important, said Nick Brown, the register’s spokesman.

But standardizing shipbuilding regulations might prove easier than sussing out the uncharted waters of maritime law as it applies to these new vessels, said Sam Blatchley, an attorney in the admiralty and maritime practice group at the Pierce Atwood law firm in Boston.
“In order for this to go forward there has to be change to the legal framework,” he said.
“The same kind of laws don’t apply if you’re in Boston Harbor versus if you’re in the briny blue.”

Among the challenges: determining who is responsible if an unmanned vessel crashes into another boat.
And there are maritime rules that require on having a lookout onboard, so would someone watching via a remote camera count?

At the outset, Johnson and Lorman of Sea Machines are focused on smaller-scale commercial operations and have self-funded their efforts up to this point, they said.

And they hope to allay fears that robot boats would take jobs from humans, saying they could instead help fix the looming shortage of merchant mariners that the United States may soon face.
In March, the head of the Maritime Administration issued a warning: The country will need 70,000 more people to support the maritime fleet by 2022.
“The marine space is really the last big domain for autonomy,” Johnson said.