The shipping forecast: a map of Britain's splendid isolation 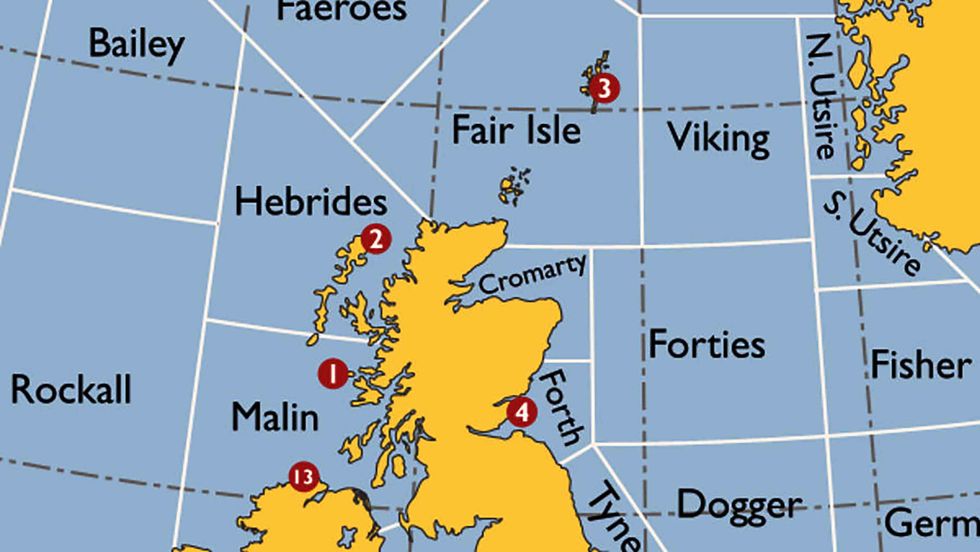 From Bigthink by Frank Jacobs

The Shipping Forecast is quite possibly the most British thing ever.

The Shipping Forecast is quite possibly the most British thing ever.
It’s quirkier than cricket, defiantly old-fashioned and ceremonial, and as reassuringly regular as Big Ben (1).
Produced by the UK’s Meteorological Office, it's broadcast four times a day by BBC Radio Four.

But it is more than mere maritime meteorology.
For over 90 years, the Shipping Forecast has been a punctual reminder of Britain’s island status – a declaration of geopolitical detachment expertly disguised as a weather bulletin. Splendid isolation masquerading as shifting isobars (2).
And as such, one of the greatest examples of classic British understatement.
If that isn’t an oxymoron.

Listing the weather conditions in 31 sea areas surrounding the British Isles, the Shipping Forecast is read out at 5.20 am, 12.01 pm, 5.54 pm and 00.48 am.
The first and last broadcasts of the day also include reports from additional weather stations and inshore waters forecasts.
The last one also includes an outlook for next-day weather across the UK itself.

Much of the Forecast’s charm derives from the – literally – outlandish names of the sea areas listed in the bulletin. The names derive from sandbanks (e.g. Dogger, Bailey), estuaries (Forth, Thames, Shannon), islands or islets (Wight, Rockall, Utsire), towns (Dover), or other geographic features (e.g. Malin Head, Ireland’s northernmost point).

One is named FitzRoy, after the captain of HMS Beagle, Britain’s first professional weatherman and the founder of the Met Office.
The southernmost region, Trafalgar is only mentioned standard in the last forecast of the day.
The regions are always listed in the same order, starting north with Viking, between Scotland and Norway, and then proceeding in a roughly clockwise direction:

A few others are mentioned only in the 00:48 broadcast: Boulmer, Milford Haven, Liverpool Crosby, Machrihanish Automatic, among others. 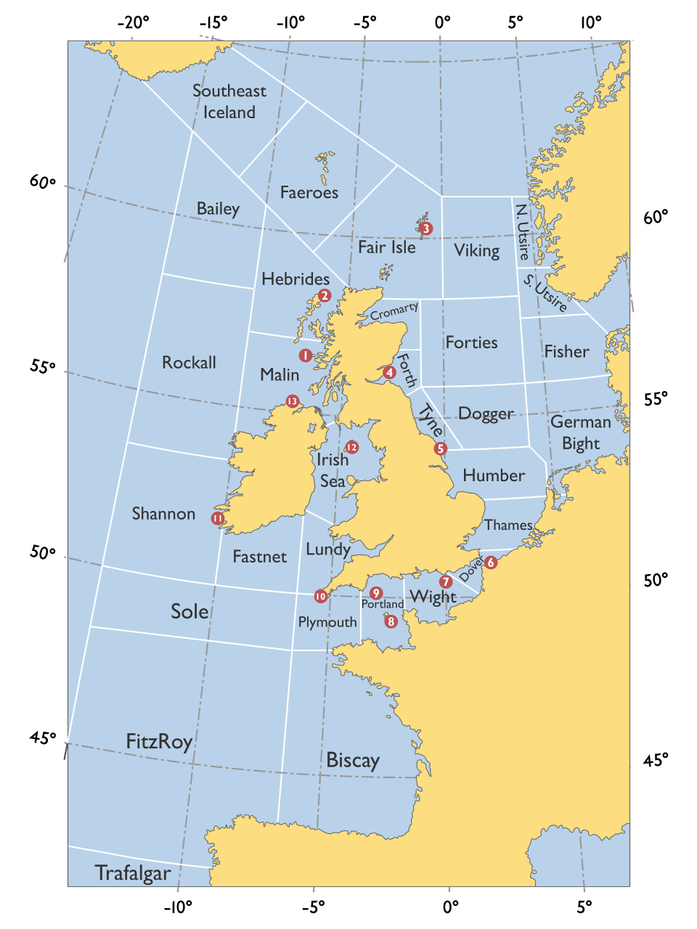 One of the Shipping Forecast’s attractions to others than fishermen and sailors is its poetic effect, the result of its very strict format and an arcane terminology, only intelligible to the initiated.

Each bulletin begins with exactly the same opening line, and follows the same structure.
Preceded by gale warnings if necessary, a General Synopsis gives the position, pressure in millibars and track of pressure areas.
Then follows the forecast for each of the 31 areas, sometimes with some areas grouped together if they have the same outlook.
Each of these lists wind direction and strength, precipitation if applicable, and visibility (‘good’ for more than 5 nautical miles, ‘poor’ for less than 2 nm, and ‘fog’ for less than 1,000 metres).
The whole thing never exceeds 370 words.

The gap between Radio Four’s last programme of the day and the final Shipping Forecast, at 48 minutes past midnight, is plugged with as much as necessary of ‘Sailing By’, an orchestral piece by Ronald Binge, otherwise famous for his arrangements for Mantovani.
The repetitive waltz helps sailors find the right frequency.
For the many landlubbers tuning in to the last Shipping Forecast of the day, the cozy number signals that it’s almost time to turn in for the night.

Thousands use the day’s last forecast as a lullaby.
Adding to its hypnotic, soporific effect is the fact that it’s read out at a deliberately slow pace, to allow seafarers to make notes.
The strange place-names and the weird jargon give the Shipping Forecast a magical shine.
And perhaps they give the thousands tucked away safe in their beds pause to think about those out at sea at that very moment, in the dark, listening to the same bulletin.

The forecast is followed by God Save the Queen, after which it’s exactly 1 am, and BBC World Service takes over.

The Shipping Forecast has made a huge mark on music, literature and the wider culture.
It inspired songs by Jethro Tull, Manfred Mann’s Earth Band, Wire, Blur, Radiohead, Tears for Fears, British Sea Power, Beck and the Prodigy, among others, and it was used in the opening ceremony of the 2012 London Olympics.
Nobel-prize-winning poet Seamus Heaney wrote a sonnet called ‘The Shipping Forecast’, and British Poet Laureate Carol Ann Duffy mentions “the radio’s prayer” in one of her poems.
The programme is used in books, films, tv series, and has been parodied countless times (once as ‘The Shopping Forecast’, listing UK supermarkets instead of sea regions)
Southeast Iceland: Cyclonic becoming easterly or southeasterly 4 or 5, increasing 6 or 7 later in west. Moderate, occasionally rough. Occasional rain. Good, occasionally poor. Trafalgar: Cyclonic 4 in southeast, otherwise northerly 5 to 7. Slight or moderate in southeast, otherwise moderate or rough. Thundery showers. Good, occasionally moderate.
Here is BBC Radio 4’s Shipping Forecast page.
Quoted text is that of the Shipping Forecast issued by the Met Office at 16.25 on Monday 21 March 2016, retrievedhere from the Met Office website.
Map of the sea regions by Emoscopes, found here on Wikimedia Commons.

Update 27 March 2016: changed the composer's name from Ronald "Ronnie" Biggs, whose fame derives from his participation in the Great Train Robbery. Thanks Aneel for pointing out the error!

Update 11 January 2017: Many thanks to Janos Vargha for sending in this news item about this artwork by Jane Tomlinson, awarded the John C Bartholomew Award for Thematic Mapping by the British Cartographic Society. 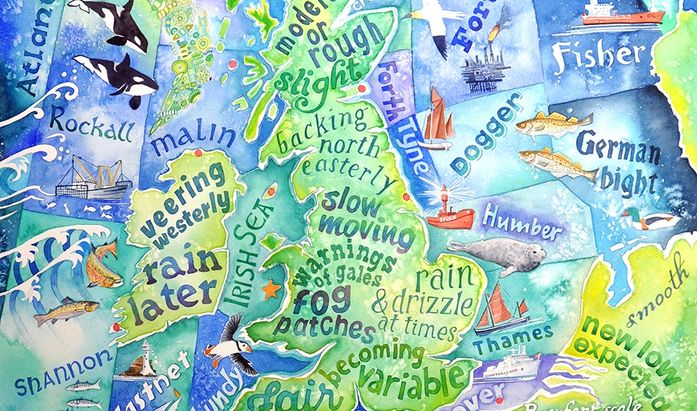 Posted by geogarage at 3:48 PM