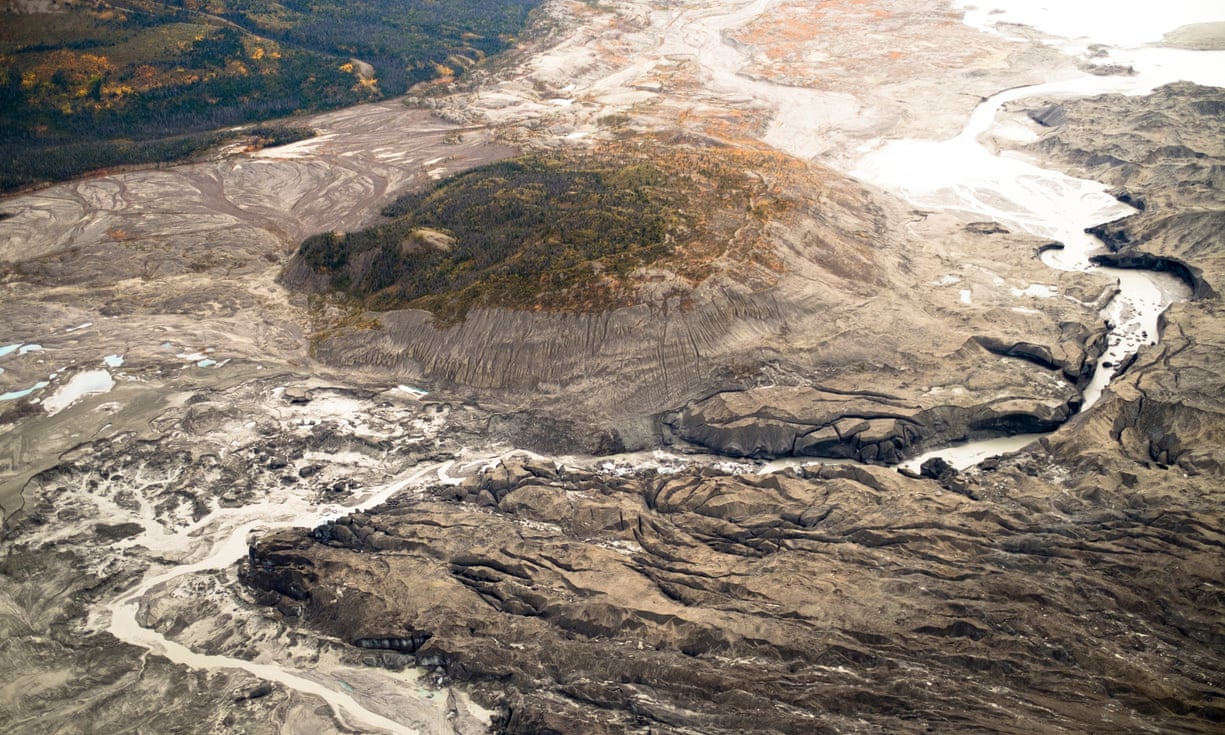 A view of the ice canyon that now carries meltwater from the Kaskawulsh glacier, seen here on the right, away from the Slims river and toward the Kaskawulsh river.
Photograph: Dan Shugar/University of Washington Tacoma

An immense river that flowed from one of Canada’s largest glaciers vanished over the course of four days last year, scientists have reported, in an unsettling illustration of how global warming dramatically changes the world’s geography.


One of Canada's rivers has vanished.
The Slims river has been flowing through Canada for 300 years, but in 2016 something happened that caused it to vanish in the blink of an eye.
In just four days, the river dipped in height so much that it could not recover.
Today, the only evidence of the Slims river is its empty, thirsty channel.
Scientists attribute the river's disappearance to our warming climate and predict that future rivers may suffer the same fate.

The abrupt and unexpected disappearance of the Slims river, which spanned up to 150 metres at its widest points, is the first observed case of “river piracy”, in which the flow of one river is suddenly diverted into another.

The mouth of the Slims River at Kluane Lake

For hundreds of years, the Slims carried meltwater northwards from the vast Kaskawulsh glacier in Canada’s Yukon territory into the Kluane river, then into the Yukon river towards the Bering Sea.
But in spring 2016, a period of intense melting of the glacier meant the drainage gradient was tipped in favour of a second river, redirecting the meltwater to the Gulf of Alaska, thousands of miles from its original destination.

The continental-scale rearrangement was documented by a team of scientists who had been monitoring the incremental retreat of the glacier for years.
But on a 2016 fieldwork expedition they were confronted with a landscape that had been radically transformed. 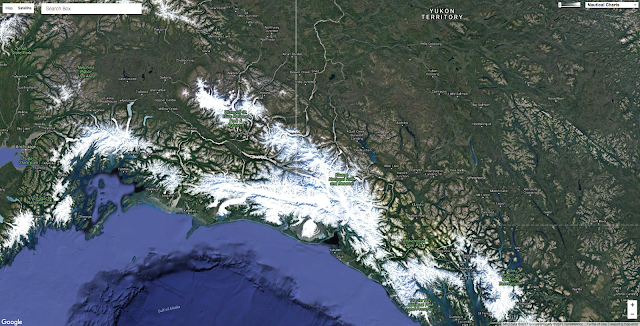 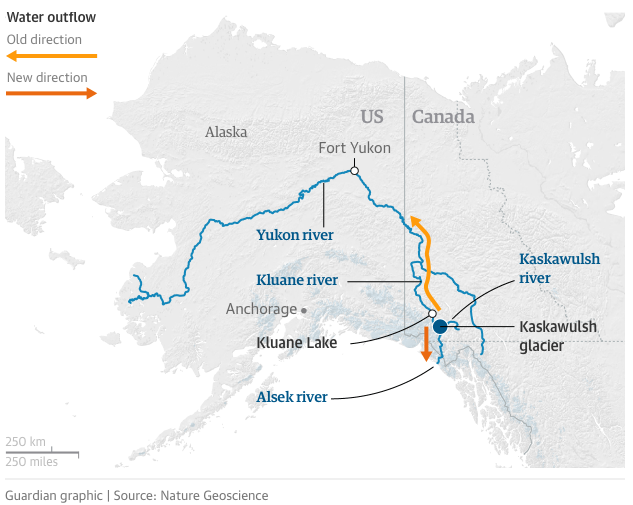 “We went to the area intending to continue our measurements in the Slims river, but found the riverbed more or less dry,” said James Best, a geologist at the University of Illinois.
“The delta top that we’d been sailing over in a small boat was now a dust storm. In terms of landscape change it was incredibly dramatic.”


Climate change is causing thick ice deposits that form along Arctic rivers to melt nearly a month earlier than they did 15 years ago, a new study finds.
In the past, river icings have melted out around mid-July, on average.
But a new study measuring the extent of river icings in the U.S. and Canadian Arctic shows most river icings disappeared 26 days earlier, on average, in 2015 than they did in 2000, melting around mid-June.
In addition, the study found most icings that don’t completely melt every summer were significantly smaller in 2015 than they were in 2000.

Dan Shugar, a geoscientist at the University of Washington Tacoma and the paper’s lead author, added: “The water was somewhat treacherous to approach, because you’re walking on these old river sediments that were really goopy and would suck you in. And day by day we could see the water level dropping.”

The team flew a helicopter over the glacier and used drones to investigate what was happening in the other valley, which is less accessible.
“We found that all of the water that was coming out from the front of the glacier, rather than it being split between two rivers, it was going into just one,” said Best.

The Kaskawulsh River, seen here near its headwaters,
is running higher now thanks to the addition of water that used to flow into the Slims River.
Photograph: Jim Best/University of Illinois

While the Slims had been reduced to a mere trickle, the reverse had happened to the south-flowing Alsek river, a popular whitewater rafting river that is a Unesco world heritage site.
The previous year, the two rivers had been comparable in size, but the Alsek was now 60 to 70 times larger than the Slims, flow measurements revealed.
The data also showed how abrupt the change had been, with the Slims’ flow dropping precipitously from the 26 to 29 May 2016.

Geologists have previously found evidence of river piracy having taken place in the distant past.
“But nobody to our knowledge has documented it happening in our lifetimes,” said Shugar
“People had looked at the geological record, thousands or millions of years ago, not the 21st century, where it’s happening under our noses.” 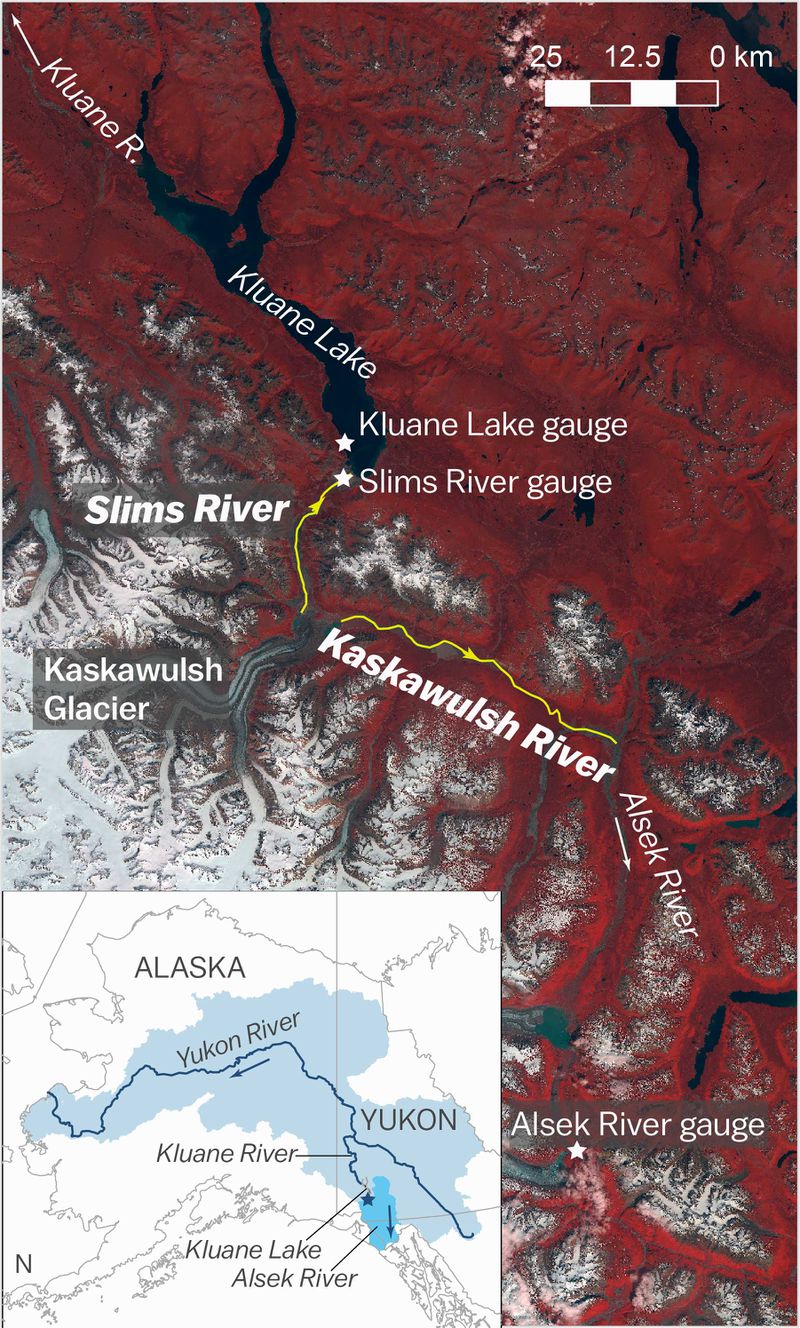 Prof Lonnie Thompson, a paleoclimatologist at Ohio State University who was not involved in the work, said the observations highlight how incremental temperature increases can produce sudden and drastic environmental impacts.
“There are definitely thresholds which, once passed in nature, everything abruptly changes,” he said.

Between 1956 and 2007, the Kaskawulsh glacier retreated by 600-700m. In 2016, there was a sudden acceleration of the retreat, and the pulse of meltwater led to a new channel being carved through a large ice field.
The new channel was able to deliver water to the Alsek’s tributary whose steeper gradient resulted in the Slims headwater being suddenly rerouted along a new southwards trajectory.

In a geological instant, the local landscape was redrawn.
Where the Slims once flowed, Dall sheep from Kluane National Park are now making their way down to eat the fresh vegetation, venturing into territory where they can legally be hunted.
The formerly clear air is now often turned into a dusty haze as powerful winds whip up the exposed riverbed sediment.
Fish populations are being redistributed and lake chemistry is being altered.
Waterfront land, which includes the small communities of Burwash Landing and Destruction Bay, is now further from shore. 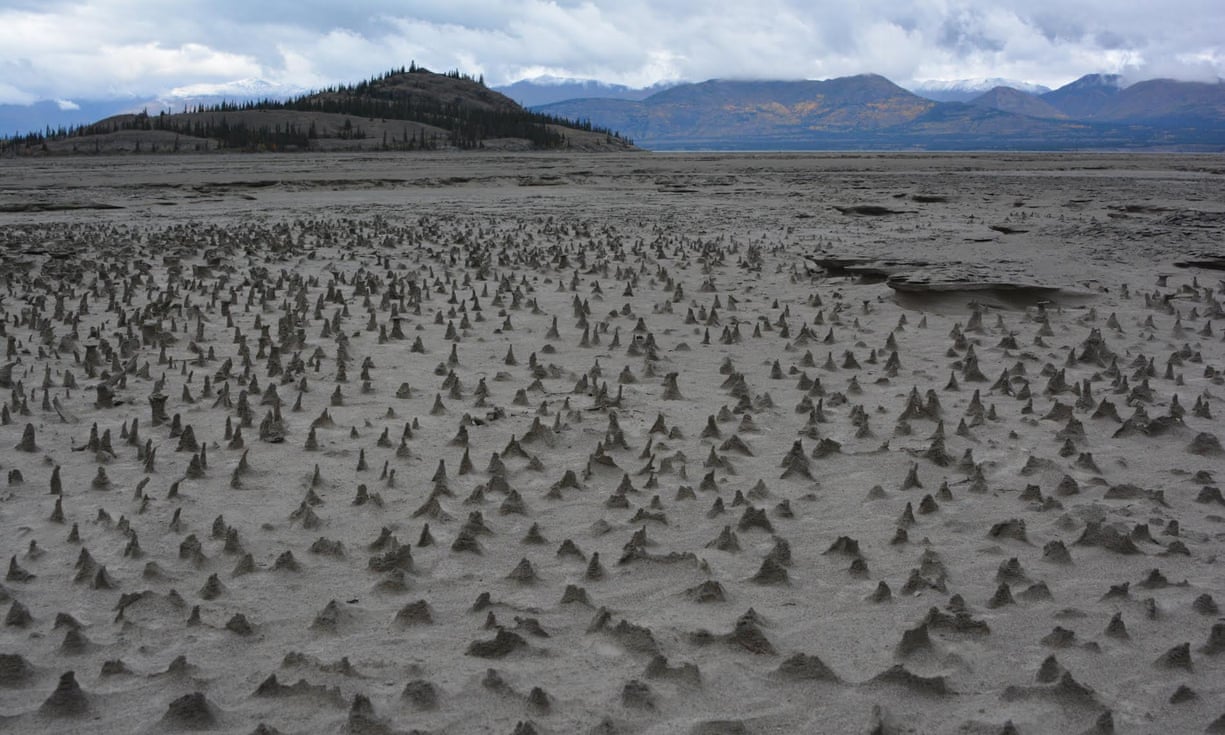 Sections of the newly exposed bed of Kluane Lake contain small pinnacles.
Wind has eroded sediments with a harder layer on top that forms a protective cap as the wind erodes softer and sandier sediment below.
These pinnacles, just a few centimeters high, are small-scale versions of what are sometimes termed “hoodoos.”
Photograph: Jim Best/University of Illinois

A statistical analysis, published in the journal Nature Geoscience, suggests that the dramatic changes can almost certainly be attributed to anthropogenic climate change.
The calculations put chance of the piracy having occurred due to natural variability at 0.5%.
“So it’s 99.5% that it occurred due to warming over the industrial era,” said Best.

The Yukon region is extremely sparsely inhabited, but future river piracy could have catastrophic effects on towns, villages and ecosystems that have sprung up around available water, according to an analysis accompanying the paper, by Rachel Headley, a geologist at the University of Wisconsin-Parkside.
“If a river changes course so drastically that the drainage basin no longer reaches its original outlet, this change might eventually impact human and biological communities that have grown around the river’s original outlet,” she said.

Thompson, who has documented glacial retreat on Mount Kilimanjaro, predicts that there will be an acceleration in the observations of river piracy events as glaciers retreat globally.
“I think we could see similar divergence in streams in the Himalayas as well as throughout the Third Pole region, the Andes of Peru, other sites in northern Canada and Alaska,” he said.
“Often these events occur in remote and poor parts of our planet and thus go largely unnoticed by the larger population but greatly impact the livelihood of many families downstream.”