Future of Antarctic marine protected areas is at risk

Antarctica’s surrounding waters are home to some of the healthiest marine ecosystems on Earth, but efforts to establish conservation areas in the Southern Ocean are being hobbled by political infighting and fishing interests.
Image Copyright: John B. Weller

From Standford Univ. by Ker Than

Efforts to adopt effective marine protected areas in the Southern Ocean, a global commons containing the world’s most pristine marine ecosystems, are being thwarted by political infighting and fishing interests.

Antarctica’s surrounding waters are home to some of the healthiest marine ecosystems on Earth and support thriving populations of krill, seabirds, fish and whales.
But efforts to establish a network of effective Marine Protected Areas (MPAs) in the Southern Ocean are being hobbled by political infighting and demands that prioritize fishing interests over conservation by members of the international consortium tasked with conserving the region, Stanford scientists say.


The last intact sea :
The Commission for the Conservation of Antarctic Marine Living Resources (CCAMLR) is currently considering the adoption of marine protected areas (MPAs) in the Southern Ocean.

The findings, published Oct.14 in Science, come as 24 countries and the European Union convene in Hobart, Australia, next week for the annual meeting of the Commission for the Conservation of Antarctic Marine Living Resources (CCAMLR), to resume negotiations of Southern Ocean MPAs.
“Our research shows that CCAMLR’s positions for and against MPAs have become entrenched,” said lead author Cassandra Brooks, a PhD candidate at Stanford School of Earth, Energy & Environmental Sciences.
“Negotiations have become entangled with larger global geopolitics and we see an emerging scramble for marine resources in this remote frontier.”
The authors argue that as a leader in international fisheries management, CCAMLR has the opportunity to set an example for ongoing negotiations at the United Nations level to develop a legal instrument for conserving biodiversity in international waters, also known as the high seas.
But if CCAMLR continues to fall short in its duties, it could set a sorry example with ramifications for marine protection in other parts of the world, said study co-author Kristina Gjerde, a legal scholar at the International Union for Conservation of Nature (IUCN).
“It would send the message that fishing interests trump conservation, despite the global interests at stake,” Gjerde said.
“It could raise doubts that nations will be able to set aside short-term national interests to confront global ocean challenges stemming from accelerating climate change.
And finally, it is doubtful that these diminished sites would count toward global goals for MPAs as they would not meet the IUCN MPA criteria.”

Despite more than a decade of international negotiations informed by robust scientific planning, CCAMLR has failed to meet its goal of adopting a system of MPAs in the Southern Ocean to conserve biodiversity in the face of threats from climate change and potential overfishing, the authors say.
A major obstacle is agreement about the concept of “rational use,” which sets the terms under which CCAMLR’s member nations are allowed to fish in the Southern Ocean.
The region contains some of Earth’s least exploited fish stocks, and its large populations of krill – small crustaceans that are food for the region’s fish, seabirds and whales – and toothfish have made it an increasingly prized fishing spot.
Krill is valuable as fishmeal and for making health supplements, and toothfish are sold as lucrative “Chilean sea bass” around the world.
As originally defined, rational use required that fishing not cause irreversible damage to the greater marine ecosystems of the Southern Ocean and for precautionary catch limits and scientific oversight to be set in place.
But as the number of CCAMLR’s fishing nations has grown, and as pressure increases to secure access to current and future resources in the Southern Ocean, some nations are pushing to equate rational use with the unfettered right to fish.
Countries such as China and Russia have argued against MPA proposals that in any way restrict fishing and demand sufficient evidence to show that fishing threatens ecosystems.
“MPA opponents want to reverse the burden of proof,” said co-author Larry Crowder, science director of the Center for Ocean Solutions in Monterey, California, and a fellow at the Stanford Woods Institute for the Environment.
“When rational use was first negotiated, the whole idea was that you needed data in order to fish.
Now, it’s being interpreted by some fishing nations as unequivocal fishing.”

Sunset clauses on the MPAs are another source of fierce debate.
MPAs are usually established in perpetuity, but some CCAMLR member nations are advocating that Southern Ocean MPAs have built-in expiration dates ranging from 20 to 30 years.
“Twenty years is shorter than the lifespan of most Antarctic predators which the MPAs are proposing to protect,” Brooks said.
But not only are sunset clauses inconsistent with the stated goals of MPAs, they do not meet internationally established criteria for protected areas and may not qualify for global MPA targets, the authors warn.
Broader geopolitics have also infiltrated CCAMLR negotiations, the authors say.
For example, poor international relations between nations – such as tensions between Russia and the United States over Crimea – seem to be spilling into the negotiating room.
Nations opposing MPAs are being accused of not negotiating in good faith, while proponents of MPAs are accused of using MPAs a political tool.
“The result is a breakdown of trust between member nations, causing a stalemate over MPAs,” Crowder said.

Two large MPAs are currently being negotiated at CCAMLR: one in the East Antarctic and one in the Ross Sea – a region that has been deemed “The Last Ocean” because it is perhaps the healthiest large marine ecosystem left on the planet.
“We’ve seen an East Antarctic and Ross Sea MPA come to CCAMLR’s decision-making table five times now without being adopted.
Next week will be the sixth,” Brooks said.
“Each year, during the course of negotiations, the proposed MPAs in these two regions have continued to be downsized, with ecologically critical areas removed and ‘research fishing zones’ added.” 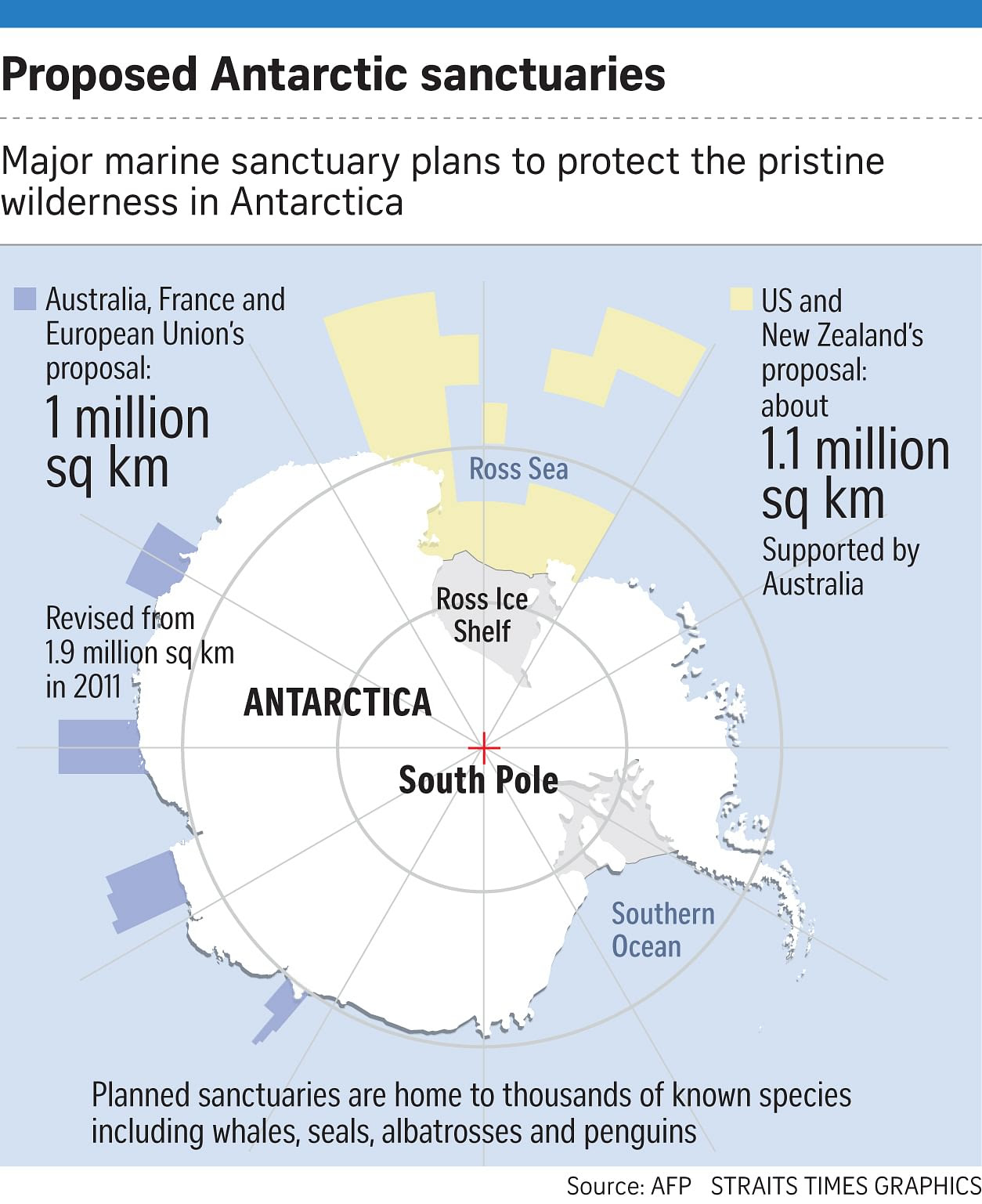 With CCAMLR meetings set to resume on Oct. 17, Brooks and her co-authors urge member nations to find a way forward in upholding their mandate and meeting their commitment toward MPAs.
“The Southern Ocean is our best-case scenario,” Brooks said.
“If we can’t figure out how to protect marine ecosystems there, it suggests it will be extremely difficult to protect them anywhere else.”
Other co-authors on the paper, “Science-based management in decline in the Southern Ocean,” include Robert Dunbar of Stanford School of Earth, Energy & Environmental Sciences; Lisa Curran, Stanford professor of anthropology and a fellow at the Stanford Woods Institute for the Environment; David Ainley of H.T. Harvey & Associates; Klaus Dodds of the Royal Holloway University of London; and Rashid Sumaila of the University of British Columbia.