What the South China Sea ruling means for the world

The Permanent Court of Arbitration in The Hague ruled that China does not have historic rights to justify its expansive claims.
The verdict, which strongly favored the Philippines, will undermine China's claim to sovereignty under the nine-dash line it draws around most of the sea.
(Simon Denyer, Jason Aldag/The Washington Post / Satellite photos courtesy of CSIS)

A verdict delivered by an international court in the Hague sent geopolitical shock waves through Asia.

The panel of judges at the Permanent Court of Arbitration said that China's exclusive claims to a vast swath of territory in the South China Sea had no historical or legal basis, siding with the Philippines in a case that Manila had brought to the court in 2013 over China's expansive moves into a number of disputed islands and shoals. 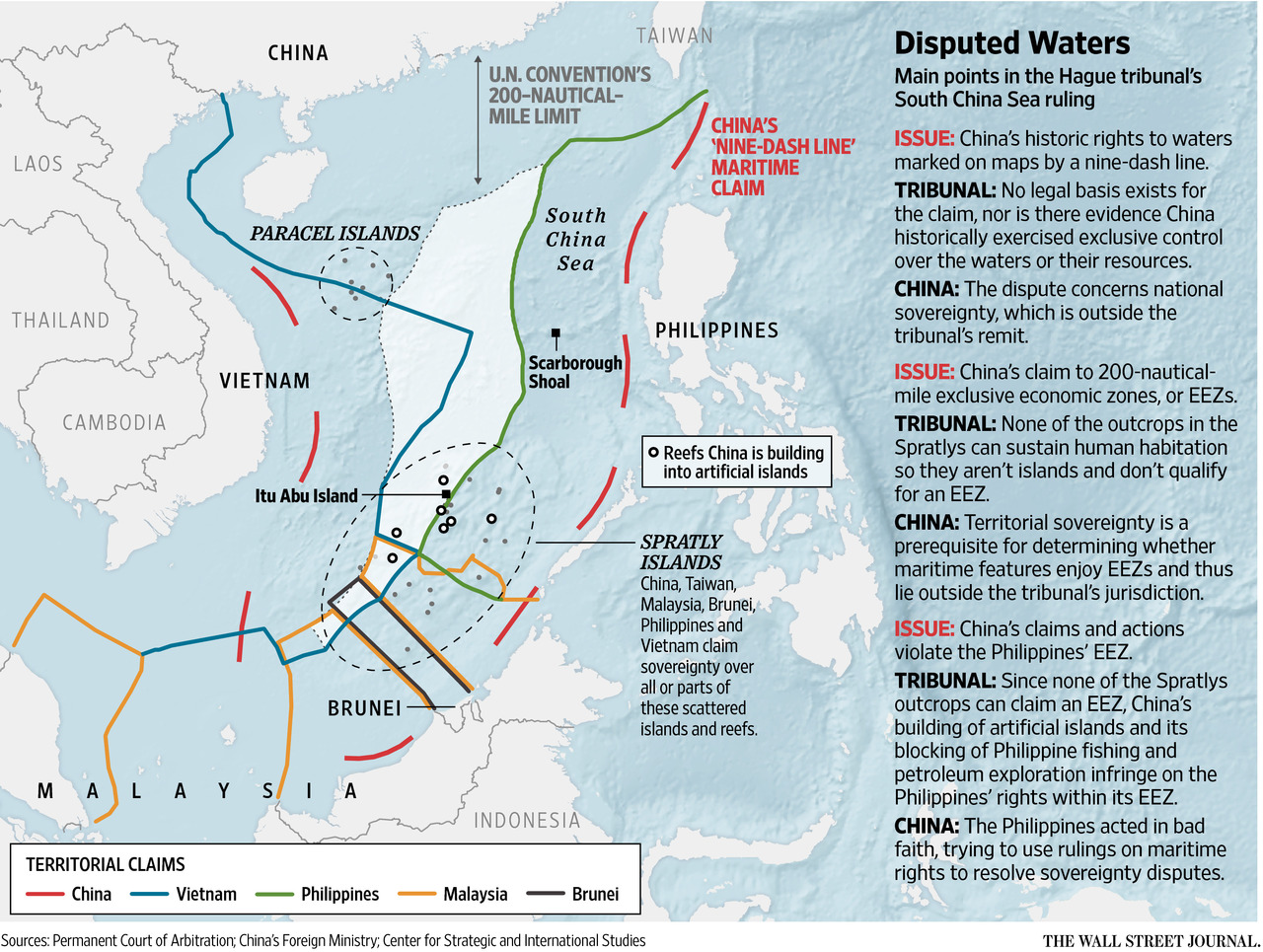 The South China Sea is one of the world's most strategic bodies of water and remains a vital conduit for a huge proportion of global shipping.
But it's also now perhaps the most treacherous flash point in the world, with the overlapping claims of half a dozen Asian governments constantly creating regional friction.

In recent times, separate disputes between China and the Philippines and Vietnam have led to minor skirmishes and naval standoffs.
China, as The Washington Post has documented over the past year, has steadily sought to change the facts on the ground (or on the waves) in its favor, establishing military bases and building up new islands in areas under its control.
The United States, meanwhile, recently deployed aircraft carriers to the region, a somewhat striking move.

The Chinese have long claimed vrtually the whole entirety of the South China Sea and the barren rocks and islands within it as their sovereign territory.
The court, though, ruled against the legitimacy of China's "nine-dash line" -- marked in the map below -- which Beijing routinely invokes as the demarcation of its historical claim over the sea.

It's a decision that's already been widely rejected both by Chinese officials and local media, as my colleagues noted Tuesday morning.
"There is no single explanation for why asserting its authority over the South China Sea now matters so much to China," wrote Howard French, a veteran China hand, in a lengthy report in the Guardian last year.
Of course, Beijing has a clear interest in extending its control over the region's fisheries as well as the potentially vast deposits of natural gas and other resources beneath the ocean floor.

But, as French elaborates, it's about much more than that for China:
It is in part a matter of increasing the country’s sense of security, by dominating the maritime approaches to its long coast, and securing sea lanes to the open Pacific.
It is in part a matter of overcoming historical grievances.
And finally, it is about becoming a power at least on par with the US: a goal that Chinese leaders are themselves somewhat coy about, but which is now increasingly entering the public discourse.

Chart of the week : Mounting tension on the high seas
(click to enlarge)

Because of the South China Sea's symbolic and strategic importance to China, the tribunal's verdict is a stinging rebuke.
In fairness, Beijing was readying for this perceived loss of face.
Before this week, its officials indicated that they did not recognize the jurisdiction of the court.
Not long after news broke of the ruling, which is non-binding, Chinese state media declared it "null and void."

But the decision does return a great deal of scrutiny of China's actions in the South China Sea, which are being closely watched by the international community.
"'Might makes right' does not define international rules," a columnist trumpeted in the Philippine Star in the aftermath of the court's verdict.
"It is difficult to imagine how even the most slavish apologist for Beijing ... can possibly defend China’s claims, and more importantly its actions, in the South China Sea following the court’s devastating ruling," wrote Greg Sheridan, foreign editor of the Australian newspaper.
"China is now faced with a dilemma," wrote Simon Denyer and Emily Rauhala, The Washington Post's correspondents in Beijing.
"It can signal its displeasure at the ruling by extending that program and militarizing the islands it controls, risking confrontation and even conflict with emboldened Asian neighbors and the United States. Or it can suspend the program and adopt a more conciliatory approach, at the risk of a loss of face domestically."

The United States hopes the ruling and pressure blunt China's perceived expansionism in the Asia-Pacific and calms tensions with its neighbors.
“In the aftermath of this important decision, we urge all claimants to avoid provocative statements or actions,” said State Department spokesman John Kirby.
“This decision can and should serve as a new opportunity to renew efforts to address maritime disputes peacefully.”

But there's an argument that a stung Beijing may decide to be less cooperative with Manila and a new president who is hoping to secure vital trade deals with China.
"The Philippines may have won a favorable award ... but that leaves the space for bilateral negotiation and 'off ramping' with China limited," Ankit Panda observes in the Diplomat.

And at least one senior Chinese official seemed to signal a gloomy change in the atmosphere.
"It will certainly undermine and weaken the motivation of states to engage in negotiations and consultations for solving their disputes," Cui Tiankai, China's envoy in Washington, told Reuters after the decision from The Hague.
"It will certainly intensify conflict and even confrontation."

We'll see whether that's the case in the coming months.
When it comes to the South China Sea, though, the United States and China have competing visions for the future.
"What is at stake is not only regional security in Asia, which has been heavily undermined by the increased militarization of territorial disputes, but also shared access to global commons in accordance to modern international law," Richard Javad Heydarian, a Manila-based political scientist, wrote for Brookings.
"It is a clash between China’s 'territorial' and 'closed seas' vision of adjacent waters, on one hand, and the international community’s call for 'open seas' and rule of law in international waters, on the other."

But although it has the backing of a host of regional allies wary of China's rise and growing military, the United States doesn't have that much moral high ground in the matter, as my colleague Michael Birnbaum points out.
Major western powers, especially administrations in Washington, have kept themselves at arm's length from arbiters in The Hague.
"Many nations, including Russia, the United States and Britain, have disregarded international rulings at some point," Birnbaum wrote.
"And, unlike China, the United States has not even ratified the U.N. Convention on the Law of the Sea, which underpinned Tuesday's ruling, so Washington could not be held accountable in a similar way."

Posted by geogarage at 9:32 AM