Philippines vs China: Why a South China Sea ruling may change Asia

From CNN by Ben Westcott

A panel of five experts in maritime law will soon hand down their final decision in a case that will have major, lasting implications for one of the world's biggest potential flashpoints -- the South China Sea.

In 2013, the Philippines filed a case against China at the Permanent Court of Arbitration in The Hague, seeking a ruling on its right to exploit the waters near the islands and reefs it occupies in the South China Sea.
Beijing has refused to participate in the case but the outcome could have lasting implications for China's rise as a superpower, global trade and even world peace.
China is conducting military drills in the disputed waters in the run-up to the ruling, which will be released on July 12.


There are three key points -- firstly, the Philippines wants the court to decide whether certain features in the sea are islands, reefs, low tide elevations or submerged banks.
It might sound like a minor point, but under the United Nation's Convention on Laws of the Sea (UNCLOS) each delivers different rights over the surrounding waters.
For example, a recognized island delivers an Exclusive Economic Zone of 200 nautical miles, giving the responsible country complete control over all enclosed resources, including fish, oil and gas.
Importantly, artificial islands like those China has been building are not counted.
Secondly, the Philippines wants the court to rule on exactly what territorial claims in the South China Sea their country is owed under UNCLOS.
These may contradict and potentially legally invalidate China's claims.
Finally, the Philippines wants the court to determine if China has infringed on its territorial rights through China's construction and fishing activities in the sea. 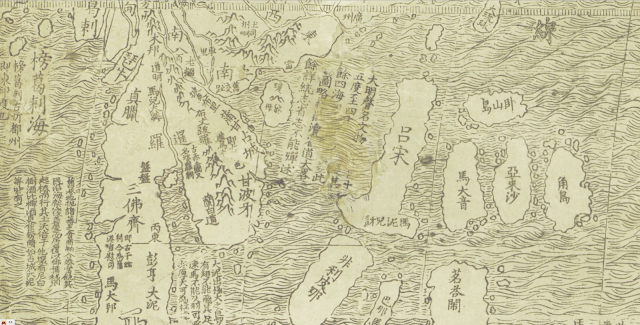 A portion of an original 1602 Ricci Map at the University of Minnesota
that has the legend about the Ming Empire’s borders erased.
Photo courtesy of John J. Tkacik

Unattributed, very detailed, two page colored edition (1604?), copy of the 1602 map Kunyu Wanguo Quantu by Matteo Ricci at the request of the Wanli Emperor.
This digitalization of the map is of a Japanese export copy of the original Chinese version, with phonetic annotations in Katakana for foreign place names outside of the Sinic world, predominantly around Europe, Russia and the Near East.

A portion of an 1604 version of the Ricci map
with the legend about the Ming Empire’s borders intact.
Photo courtesy of image Database of the Kano Collection, Tohoku University Library
and Wikimedia Commons

China has long refused to take part in the case and, under the terms of the UNCLOS treaty, this is well within their legal right.
As the verdict gets closer, Beijing has spoken out, saying the case goes beyond the jurisdiction of UNCLOS and insisting multiple times that it won't acknowledge the court's decision.
Additionally, China has been ramping up a propaganda campaign to assert their historical rights in the region with state news agency Xinhua publishing almost daily articles outlining their views.
Still, the court's decision is widely expected to go against them.
"I wouldn't say it is 100% but it's expected predominantly to go in the Philippine's way," said Euan Graham, international security program director at Australia's Lowy Institute.
"There will be something for China but almost everyone I've spoken to would expect the bulk of the Philippine's case to get a positive ruling."


The United Nation's Convention on the Law of the Sea, originally agreed to in 1982, was designed to allow countries to clearly lay out who controlled what off their coastline.
For the purposes of the South China Sea dispute, the most important part of UNCLOS is the exact definitions of what each country controls.
An island controlled by a country is entitled to a "territorial sea" of 12 nautical miles (22 kilometers) as well as an Exclusive Economic Zone (EEZ) -- whose resources -- such as fish -- the country can exploit, of up to 200 nautical miles (370 kilometres).
A rock owned by a state will also generate a 12 nautical mile territorial border but not an economic zone under UNCLOS, while a low-tide elevation grants no territorial benefits at all.
These obscure definitions are very important in the South China Sea and in the Philippine's case to the United Nations, as Manila's UNCLOS-mandated Exclusive Economic Zone overlaps with waters claimed by China and Vietnam.
It also explains why countries are so desperate to grab islands and reefs in the South China Sea to legitimize their claims.
Both China and the Philippines are signatories to the convention, as is Vietnam, although several other countries aren't including the United States.

The South China Sea is one of the most politically sensitive regions in the world - the Permanent Court of Arbitration's ruling will be the first time an international court has passed judgment on the region's mess of claims and counter-claims.
At least five countries claim territory in the South China Sea, including China, the Philippines, Vietnam, Malaysia and Brunei.
Several tense stand-offs have already threatened to throw the area into conflict, including in 2012 when the Philippine Navy intercepted several Chinese fishermen off the Scarborough Shoal.
As China begins to stretch its muscles as a growing superpower, the South China Sea has become a testing ground for whether they will rise as part of the global society or outside it.
If they ignore or go against the court's arbitration, analysts say it could have worrying implications for the stability of the region and weaken an already fragile peace in the sea.
The South China Sea is also a major trade corridor, with $5.3 trillion in ship-borne trade passing through the waters each year.
"The best guesses suggest that more than half the world's maritime trade goes through the Straits of Malacca, along with half the world's liquefied natural gas and one third of its crude oil," southeast Asia expert Bill Hayton wrote in this book The South China Sea: The Struggle for Power in Asia. 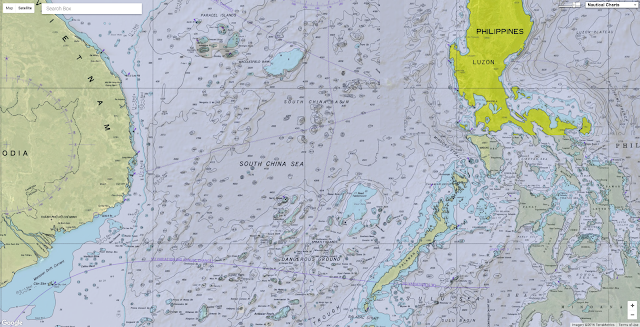 Will the ruling resolve anything?

Legally, the Permanent Court of Arbitration's decision will be binding and there may be implications diplomatically for China if they refuse to abide by it.
"People are saying if China doesn't abide by the ruling then it undermines its own position that it is committed to maintaining a rules-based order," Singapore's Institute of South East Asian Studies senior fellow Ian Storey said.
"So the consequences will be to its reputation."
However, there is no military options to enforce the ruling - United Nations troops will not be forcing China off Fiery Cross or Mischief Reef.
"The big question mark about the ruling is who is going to reinforce it, because ultimately it's a binding judgment, but if China chooses to ignore it it's very difficult for the Philippines to change the status quo," Lowy Institute's Graham said.
"I don't think anyone expects China to reverse its island building."
However, legal experts have said if the ruling is favorable to them, the Philippines could return to court and ask for other, stricter measures against China.
It's also important to note the tribunal has no jurisdiction to decide any issues over the sovereignty of islands and rocks in the South China Sea -- the heart of the controversy.
UNCLOS only deals with control of the waters surrounding them.