What happened to the Polar Vortex?

From Scientific American by Andrea Thompson

It has been ridiculously warm across the eastern half of the country this month, with many spots likely to see their warmest December on record. New York City may reach as high as 72°F on Christmas Eve.
Washington D.C. is forecast to reach the mid-70s, and Miami the mid-80s. 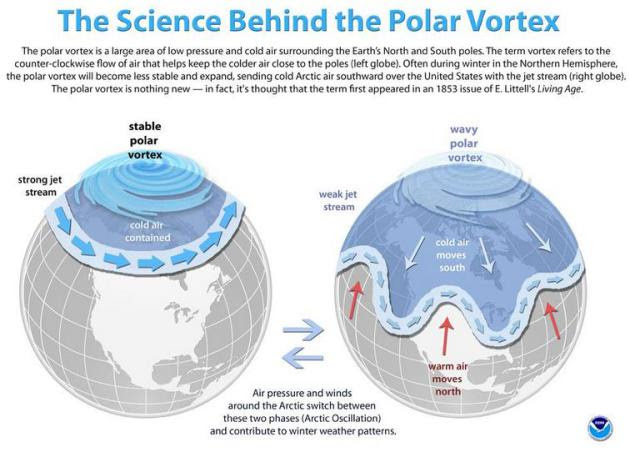 One of the factors behind this decidedly un-Christmas-like weather is a feature that came to be associated with the brutally cold winters of the past few years: the infamous polar vortex.
But if you like warm winter days, enjoy it while you can.
Because while the current state of the polar vortex is keeping dreams of a White Christmas at bay, a shift could soon be in the offing, one scientist says, potentially ushering in a more typical winter wonderland in January.

Over the past two years, the term polar vortex became synonymous with the bitter outbreaks of Arctic air that sent teeth chattering from Boston to Atlanta (after all, polar is right there in the name).
The polar vortex is a feature of the atmosphere defined as the fast moving current of air encircling the Arctic that forms during the cold months because of the increased temperature difference between the dark, frigid Arctic and the warm tropics.

There are actually two vortices, one in the layer of the upper atmosphere known as the stratosphere and one in the lower section, where our weather happens, called the troposphere.
These two features interact with each other and can affect the meteorological goings-on outside of the Arctic.
The polar vortex also interacts with other features and fluxes in the atmosphere, which causes it to vary in strength over time.

North pole could be 35C warmer than average this week, warn meteorologists
When the polar vortex is strong, as it is now, it keeps arctic air fenced in.
That is part of what is currently keeping the weather so mild in the eastern U.S..
But when the vortex is perturbed or weakened, the jet of air becomes more wobbly and can set up southward excursions of frigid air — what we saw plenty of times over the last couple winters.

The polar vortex is particularly susceptible to such weakening when it reaches its peak in mid-winter, Judah Cohen, an atmospheric scientist with the private firm Atmospheric and Environmental Research (AER), said in an email.
And that is what Cohen is forecasting will take place in January.
Cohen expects some pulses of energy working their way from the lower to upper atmosphere to perturb and weaken the polar vortex over the next few weeks.
That weakening would favor a dip in temperatures over the eastern U.S. and potentially an uptick in snowstorms, Cohen wrote in an AER blog post. 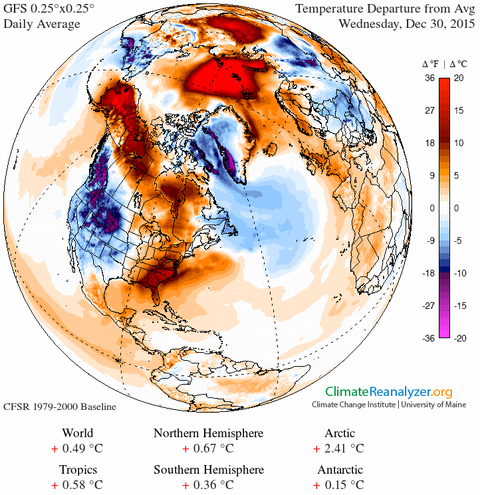 Some research suggests that the rapid warming of the Arctic, which is happening at about twice the pace of the planet as a whole, could be impacting the polar vortex.
Cohen and others think that declining sea ice and increased snow cover in Siberia are two manifestations of this amplification that are exerting a weakening influence on the polar vortex, which could be fueling more outbreaks of Arctic air.
Cohen thinks that the pulses of energy he expects to perturb the vortex over the next few weeks are related to particular areas of low sea ice and high snow cover present this fall and winter.
But this research is hotly debated.
“There are many that argue that any influence of Arctic amplification cannot be detected above the noise of the intrinsic or natural variability of the atmosphere,” Cohen said.
If the Arctic chill from the weakening of the polar vortex blows in next month, Cohen, a self-avowed fan of winter weather, would welcome the switch.
At first he didn’t mind Boston having a break after last year’s epic snows, “but I have to admit I miss winter and this is just crazy,” he said.