The American Pratical Navigator
from Nathaniel Bowditch, the founder of modern maritime navigation.

From NGA by Carling Uhler

Nathaniel Bowditch’s “The American Practical Navigator,” often simply called “Bowditch” and regarded by mariners as the premier navigational reference, is due for an update, and the National Geospatial-Intelligence Agency wants input from mariners the world over.

The first edition of “The American Practical Navigator” was a revision of “The New Practical Navigator,” the most popular navigational text of the 1700s.
Bowditch, a famous mariner and mathematician, worked with other experts of that era to revise and update the original publication and published it in 1802. 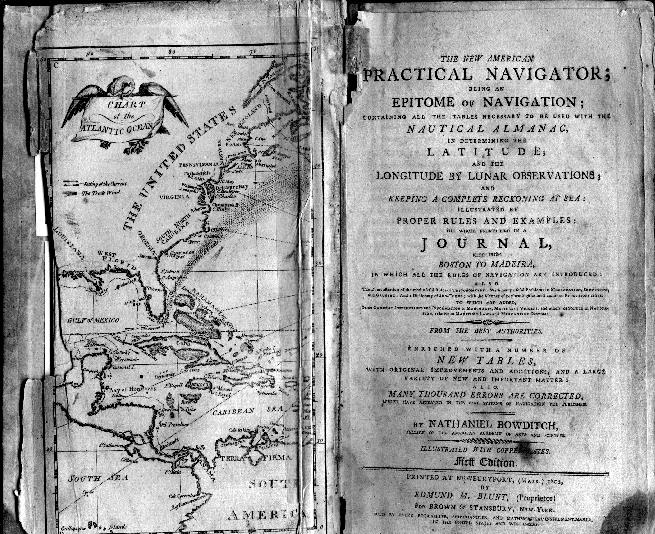 The U.S. Naval Observatory copy of the first edition "Bowditch" has the imprint "Printed at Newburyport, (Mass.) 1802, by Edmund M. Blunt, (Proprietor) For Brown & Stansbury, New York."
The manuscript signature of the original owner appears to be James "Horvey"or "Horry".
On the leaf facing the back cover, it has in manuscript "Bought by James Ho--- New York July 12th AD, 1804".
On the verso of this leaf in manuscript is "Sailed from New York for Spain June 1805."
A more recent bookplate in the front of the book states "Navigation Library of George W. Mixter". George Webber Mixter (1876-1947) wrote several books on navigation including "Primer of Navigation" which was published in several editions.
There is no record of when this book first came to the Naval Observatory Library.
The Library owns most of the later editions of Bowditch up to the present time.
Bowditch (1773-1838) was still alive when the U. S. Navy's Depot of Charts and Instruments, forerunner of the U. S. Naval Observatory, was founded in 1830.

NGA and its predecessor organizations have been responsible for reviewing the publication and ensuring it meets the demands of the modern mariner since the 19th century.
The U.S. government purchased the rights to the book in 1867 for $25,000.
The U.S. Navy Hydrographic Office, an NGA predecessor, assumed responsibility for updating the publication in 1868, and it has been regularly updated ever since.
Now in its ninth edition, the publication is freely available for download from NGA.


Chart of the Atlantic Ocean (Bowditch)

Chart of the harbours of Salem, Marblehead, Beverly, and Manchester :
from a survey taken in the years 1804 (Author: Bowditch, Nathaniel )

Collecting and publishing the most updated techniques, information, methods and data ensures “The American Practical Navigator” remains the reference resource for modern, practical marine navigation.
"For the past two centuries, Bowditch has provided each new generation of sailors the theory and science behind the art of modern marine navigation,” said Gerard Clifford, NGA Maritime Safety Office.

The deadline for users to insure their comments and feedback are considered for the new edition is June 30, 2016.
The next edition of Bowditch is expected to be published and released by NGA in 2017.