No man can hand-fish blue fin tuna alone, meet the men who capture the giant fish
using what they call the "chamber of death".

In the picturesque seaside village of Carloforte in Sardinia today fishermen will stage the same brutal ritual they have for 600 years - when rare bluefin tuna are guided and trapped in a complex corridor of giant nets and slaughtered.
The tuna are directed by fishermen through three miles of nets in the controversial Girotonno festival which climaxes in a frenzied act of violence known as 'mattanza' - or the killing.
They wait for 30kg fish to naturally swim into a complex system of underwater nets anchored near the shore, arranged into smaller and smaller rooms until the fish reach the 'death chamber'. 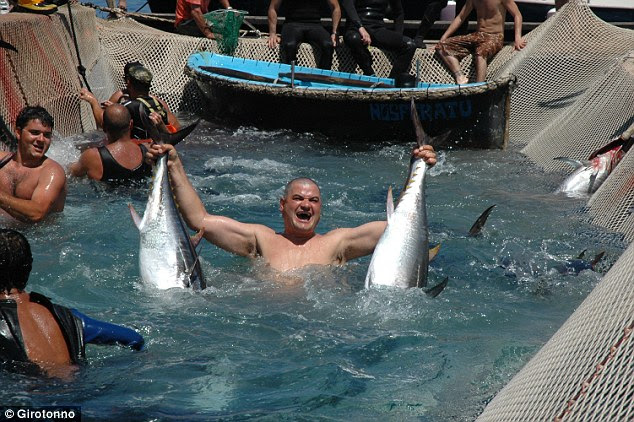 Ritual: A team of expert fisherman descend on the town of Carloforte in Sardinia every year for the bloody festival of Girotonno, where tuna fish are trapped and killed 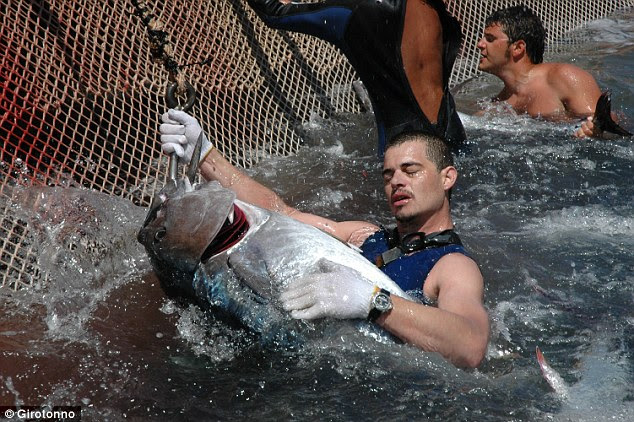 Trapped: Fishermen use the huge nets to pull the 30kg fish out of the water before impaling them on spikes


There the fish thrash about in the water before they are pulled from the water on the end of huge hooks and slit open with knives and allowed to bleed to death.
The disturbing spectacle brings loud cheers from the spectators and triumphant fishermen - as the water turns red. 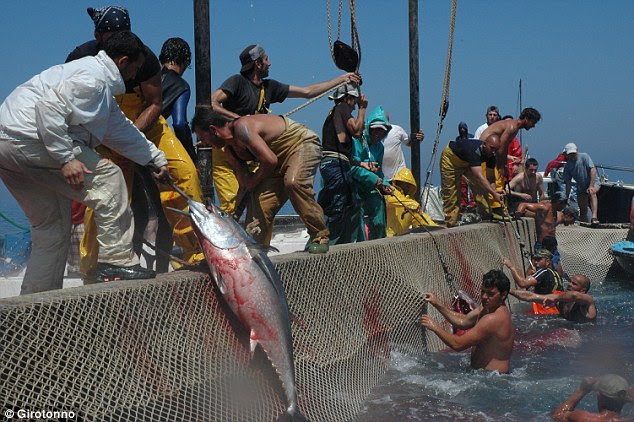 Gruesome: The climax of the festival is known as 'mattanza' - or the 'killing' - where the fish are caught and killed by skilled fisherman as spectators cheer 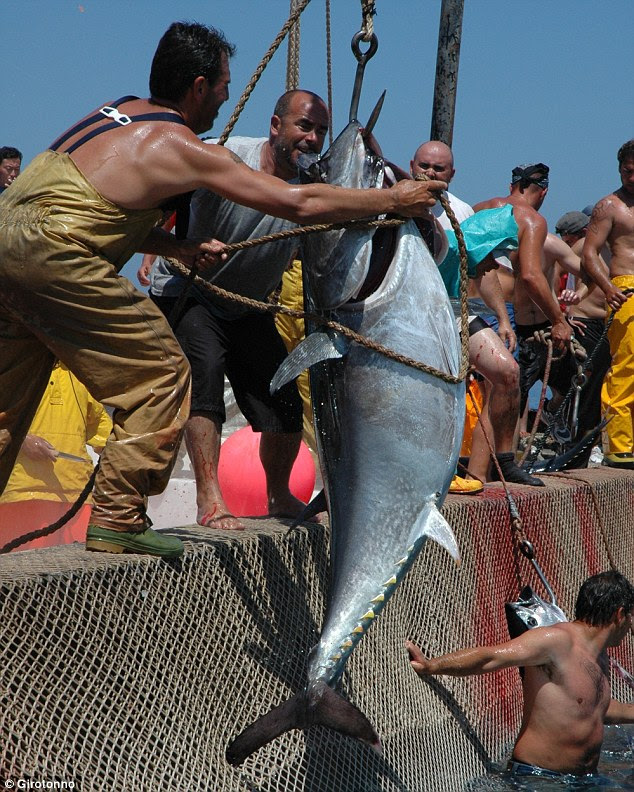 Fatal: The massive fish swim naturally into a complex series of underwater nets carefully placed in the town's tuna factory

La Mattanza, as it is known, has become an a sacred annual ceremony for the people here in Carloforte dating back to the 15th century and tuna fishing is the bedrock of the local economy.

Although the practice has been criticized by animal rights charities and has been banned in other fishing ports in the Med. 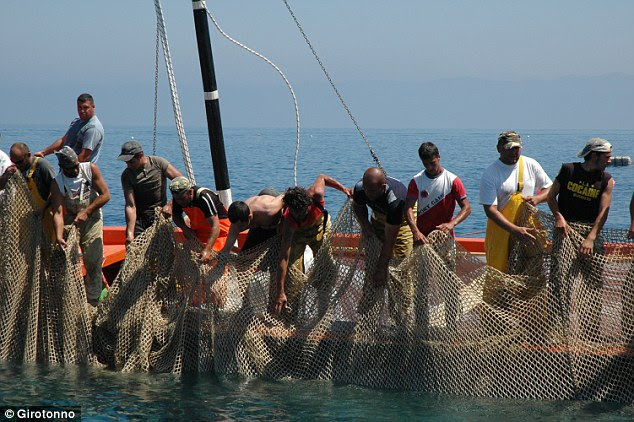 Lethal: The unfortunate ones swim into an area known as the 'death chamber' - the only place where the net is below the fish, allowing the fisherman to yank them above the surface 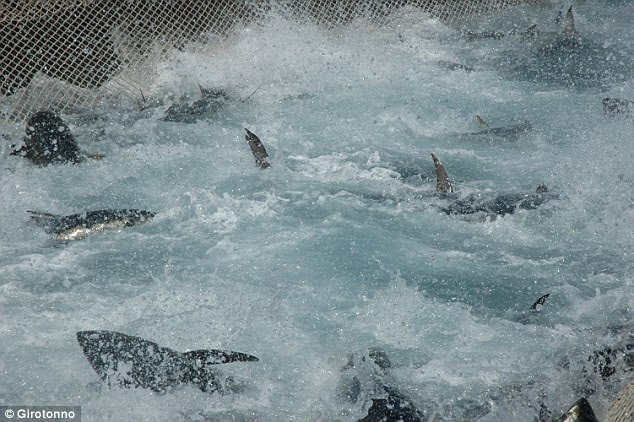 Bloody: The practice is considered so brutal, it has been banned everywhere else in the Mediterranean

A prayer is chanted at the beginning and end of the ritual to thank the Lord for the fishing.
The tuna meat is then cleaned and either canned straight away or sold fresh.
The Girotonno - or Tuna Go Round festival - begins today and attracts hundreds of amateur foodies and professional chefs from all over the world. 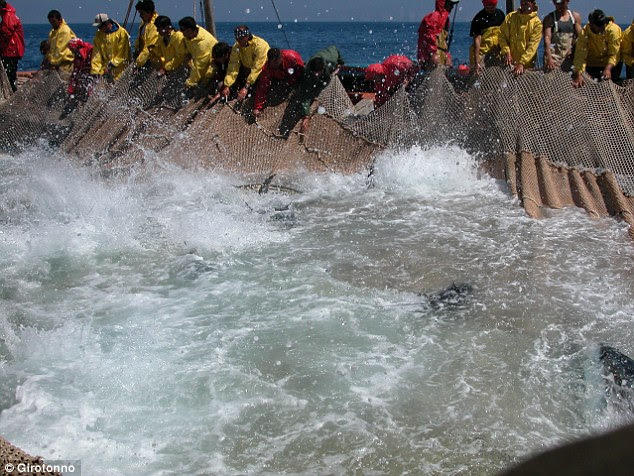 Tradition: Even though the ritual has been banned everywhere else, the locals and fishermen consider it sacred 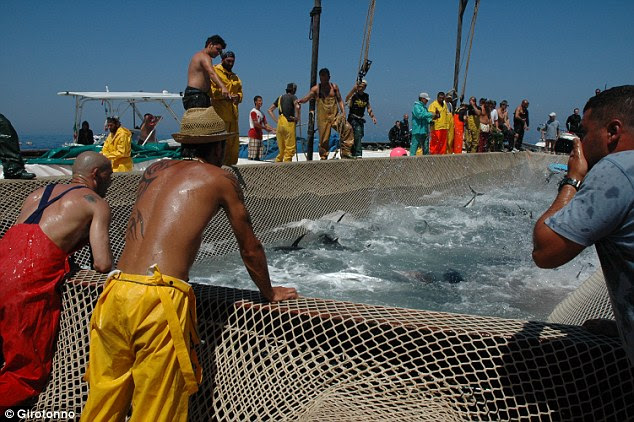 Renowned: The Girotonno - or Tuna Go Round festival - attracts hundreds of amateur foodies and professional chefs from all over the world 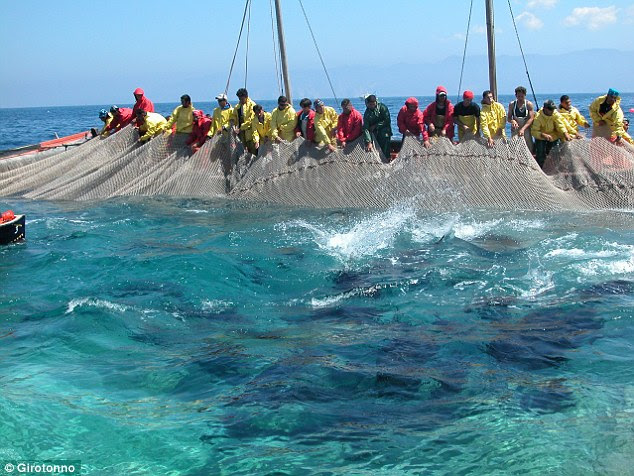 Slaughter: Crowds cheer as dozens of fishermen pull the fish out of the water (pictured) - killing them before they are either canned or sold fresh

Over 50 Michelin-starred chefs from six different countries compete to create the best traditional signature dishes and innovative twists of the red tuna delicacy.
'It can be quite gruesome, it's not for everyone,' admits the manager of the Carloforte diving centre which organises guided boat tours for the bloody ritual. 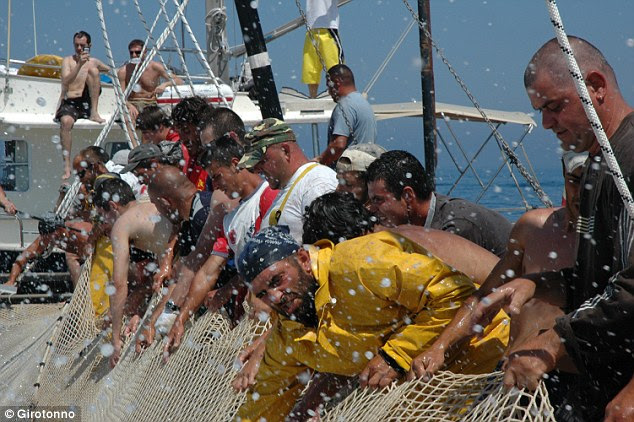 Ceremonial: Before the hunt begins and after it is over, a prayer is chanted to thank the Lord for the fishing 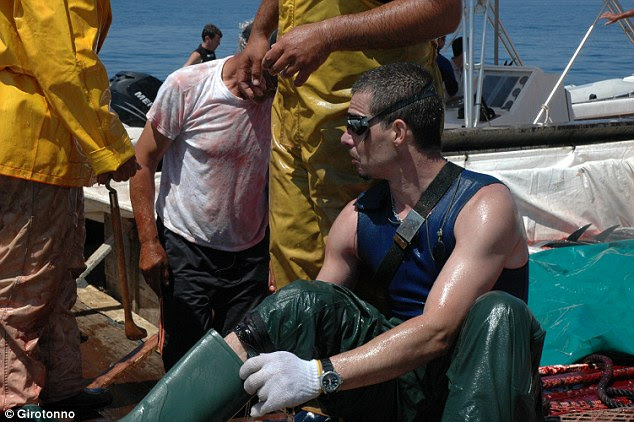 Killing: Once they pull the fish out of the water, they pierce a spike through their heads and slice them open while they still twitch 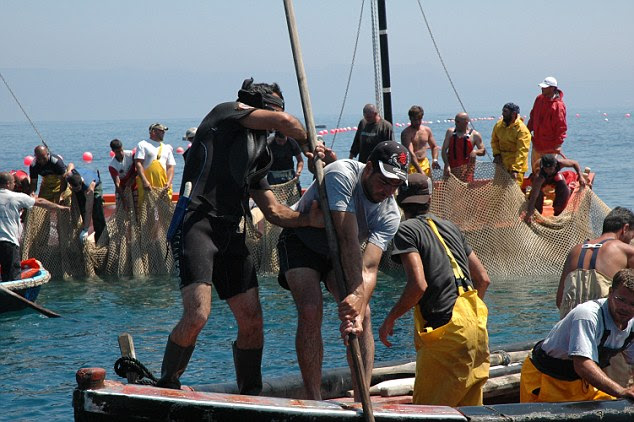 Dangerous: On ordinary days, spectators can safely dive inside the 'death chamber' to witness the whirling tuna fish but doing it during 'mattanza' (pictured) risks being severely injured

Girogio Siotto adds: 'You need a strong stomach but it's great as the festival is the only moment you can experience the trapping.'
On ordinary days, spectators can safely dive inside the 'death chamber' to witness the whirling tuna fish but doing it during 'mattanza' risks being severely injured.
The 'gore' is what makes Carloforte's red tuna so special, according to the owner of the tuna factory where the killing takes place.
Guiliano Greco is the descendant of the rich Genoese merchants who colonised the isles in the 1750s.
He says: 'The tuna's flesh must be cut to make bleed immediately, as soon as the fish is out of the water.
'The bleeding preserves the meat and it's the best way to have a top quality gourmet product on the shelves.

Our tuna was once "poor" fishermen food.
Today it's exported fresh worldwide as a very expensive product, mainly in Japan'.
The town's Mayor said he is proud of his fish and of the way it is canned, claiming it makes Carloforte's tuna 'unique', which is why it is exported to Japan and the rest of the world in enormous quantities as sushi or sashimi.
Marco Simeone added: 'It's killed before it even mates, so it's particularly fat due to the untouched sperm and eggs.
'That's why the Japanese are our biggest clients. They buy tuna here and re-sell it at home as sashimi and sushi at $500 per kilo.' 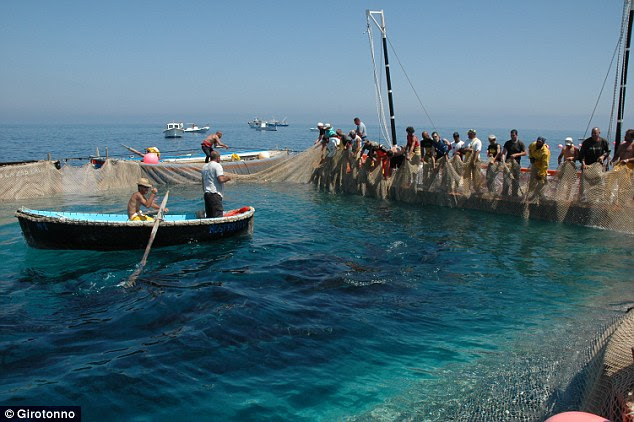 Grim: The manager of a diving centre which arranges boat tours of the killing says 'it can be quite gruesome, it's not for everyone' 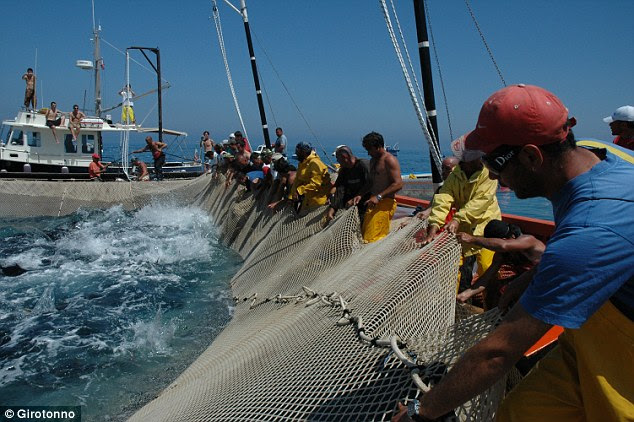 Delicacy: But the town's Mayor says he is proud of the ritual, the fish and of the way they are canned - claiming it makes Carloforte's tuna 'unique

Sardinians are renowned for eating 'porcheddu' - or roasted piglets and people in Carloforte are no exception - and not just because they slaughter the tuna like pigs.
Simeone adds: 'Tuna is our sea pig. We keep every single part of it, nothing is wasted, even the bones are used to make fertiliser.'
Animal welfare experts have criticised the festival.
Katherine van Ekert, president of Sentient, the Australian institute for animal ethics, said the tuna could feel pain when they are killed in this way.
'The suspension of the tuna's body weight is expected to cause pain and stress to the animals, as too would the tearing of their tissues as a result of gravity working against the hook.'
But to islanders, La Mattanza is a sort of 'privileged death' for the fish.

Mattanza in Italy, Almadraba in Spain

Greco believes the practice to be a respectful way of killing tuna and that it's less cruel than in the past, when the fish was snagged by dozens of hooks.
'First, we only end up fishing ten per cent of the tuna. Second: tuna dies quickly, it's less stressful for the fish as it suffers less.
'All other ways of fishing slaughter more fish and damage the sea environment, we should be given permission to do more mattanze and Europe should increase our share of fishing quota.'
Fishermen hope to capture some 100 tuna fish during the Girotonno festival, but it depends on weather and sea conditions and on the chance that some fish might escape the net.
Chef Luigi Pomata says tuna is a life tradition, adding: 'It's our culture. We have survived thanks to tuna.'