From Wired by Liat Clark


Last week, Google, Oceana and SkyTruth announced they were launching a battle against overfishing everywhere.
A noble pursuit, Global Fishing Watch combines interactive mapping technology and satellite data with the all-important Automatic Identification System (AIS) transmissions every tanker, passenger ship and commercial vessel above a certain size is mandated by the UN to send.
Global Fishing Watch then visualises the routes taken, to show when a fishing boat strays into or lingers in waters it shouldn't.

The only problem, maritime analytics company Windward tells us, is that any vessel engaging in illegal activities is gaming the system and manipulating AIS data.
We can't rely on what we're seeing.
"Until 2012, AIS data was super reliable because it wasn't commoditised. Nobody had it, so no one needed to clean the data or check it," Ami Daniel, a former naval officer and cofounder of Windward, tells WIRED.co.uk. 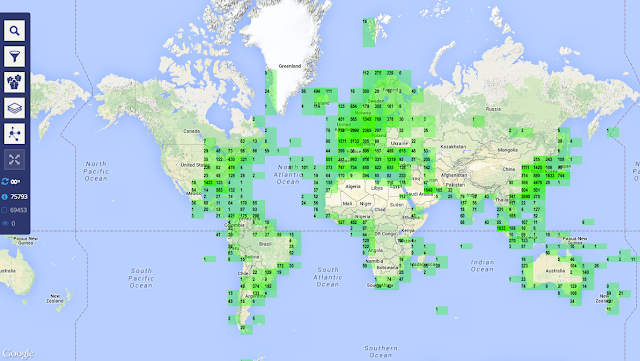 "Two years, there was suddenly so much data out there, so many open source portals like marinetraffic.com providing free access to [vessel positions] for everybody.
People understood they were being looked at.
Once that happened, spontaneously different industries started to manipulate the data."

According to a report by Windward that looked at AIS data from mid-2013 to mid-2014, there has been a 59 percent increase in GPS manipulations.
From July 2012 to August 2014, that data also showed:

Windward is crunching AIS data -- the more than 100m shipping data points produced every day -- and satellite imagery with its algorithms, taking into account the aforementioned manipulations and comparing these against past behaviours, home ports and vessel ownership, as well as general trading patterns and economic profiles.
Its software calculates how urgent the erroneous data stream is, then alerts its clients to the fact.
These include oil and gas companies in South America and West Africa and governments in South East Asia and West Africa.
Interested parties include navies, as well as national intelligence agencies.
There are many reasons a vessel would choose to manipulate its AIS transmissions.
At the most serious end of the spectrum are the illegal activities.
"The UN found a super strong connection between fishing and smuggling and terrorism," Daniel tells us.
"Fishing vessels have defacto authorization to enter any point they want in the world because the fishing industry is a global one. So it's not irregular for a vessel to go from Africa to Europe. Yet everything they do in open seas in between is unaccountable."
Human trafficking and smuggling are two of the most worrying reasons for manipulations.
Then there are plenty of economics ones -- the vessels Google and co are trying to track, which are engaging in overfishing or fishing in restricted regions for profit.
According to Windward's report, Chinese fishing vessels account for 44 percent of all GPS manipulations.
"They want to fish wherever they want," says Daniel.

It's also well known that there is a high demand for things like rhino horns and ivory in China, and that that demand is a key reason the illegal export trade in Africa has accelerated in recent years.
It's interesting, then, to look at one of the visualisations Windward has created from its analysis.
It shows a vessel turning on its AIS data somewhere off the south coast of Mexico.
It then reappears near Chile, then bizarrely crops up in the middle of Antarctica, well and truly landlocked, before curving up and heading to China.
It's so clearly doctored, but what's interesting is how it was doctored.
Daniel says a common tactic among crews is to log GPS stats that show you're a few thousands kilometres south or north of where you actually are.
Looking at this particular example, the vessel heading for China appears to have made a route that perfectly mirrors the outline of South Africa, just a few thousand kilometres south.
Daniel says crews have been "crossing the cables", or physically connecting them to a computer and using software to manipulate the GPS coordinates.
There's plenty that can be manipulated.
The data sent through AIS includes longitude and latitude, speed, course, rate of turn, depth, its unique signifier (IMO) and more.
Each manipulation might suggest a different reason, and that's what Windward is working to reveal with its algorithms.
Altering the depth, for instance, betrays that you are carrying either less or more (in weight) than you should be, and could mean a number of things.

Animated satellite map showing every large commercial fishing vessel
in the Atlantic Ocean between 2012 and 2013.

Same map, only centered on the Pacific Ocean.

Map breaking vessels down by country of origin.
Spanish boats are in blue. Japanese boats in green. Korean boats in red
(All images courtesy of  Vox )

The existence of something like Global Fishing Watch, is inarguably a good thing.
It isn't claiming to be battling human trafficking accurately, but shedding light on what is a huge global issue.
It focuses purely on fishing vessels, with its first interactive map featuring 3,125 ships, and their 35 million data points collected over 2013-2014.
Oceana has referred to the tool as "groundbreaking", and it is certainly helping shed some light and transparency on the problem, the point being vessels are incentivised to show they are fishing appropriately and where they should be.

The issue is, Global Fishing Watch is absolutely using AIS for a mission in was never prepared for. When the UN agency International Maritime Organisation mandated that every vessel turn on and use its AIS in 2002, it was purely for safety reasons.
The data is transmitted back and forth between vessels that might be near each other, to ensure collisions are avoided -- and it's doing a good job of this all these years.
In these instances, perhaps when your vessel is traversing a strait, the longitude and latitude is transmitted every few seconds.
Many of the other data points are transmitted intermittently and manually.
As Daniel puts it, "you don't have to be sophisticated at all in many cases -- you just punch in the code".
So despite AIS being mandated, the world's oceans are essentially operating on what Daniel describes as "an honour system". 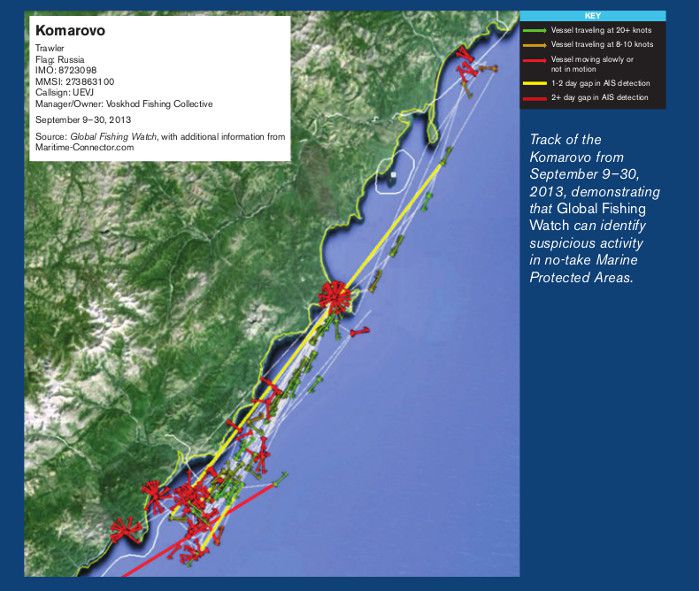 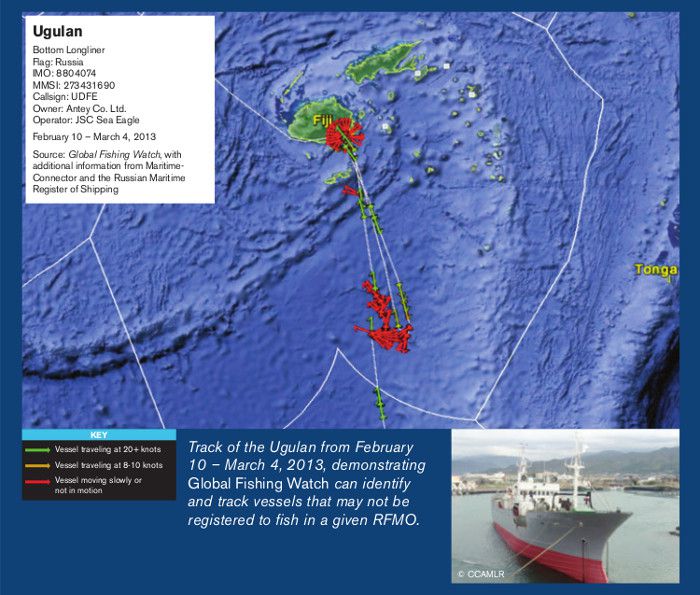 The obvious issue facing Global Fishing Watch is that the very vessels overfishing the waters are the ones that will be working to hide their tracks.
In fact, it will only be the inadvertent errors made by commercial and government vessels, and the very foolish behaviour of oblivious ill-doers, that will be caught out by Global Fishing Watch.
It is only watching those that want to be seen.

In an interview with our sister site, WIRED.com, Oceana's VP for the US, Jackie Savitz, admitted that false reasing were an issue, but that its model "can detect erratic AIS transmissions".
"If we see pings from a vessel every hour for a month, then it goes silent, but suddenly comes back on weeks later, we can pick that up and possibly trigger enforcement against them for not transmitting as they are supposed to."
The problem, as Windward points out, is that crews are becoming more savvy to the various AIS manipulations they can make -- it's not as easy as looking for those switching off any more.
In fact, few would use this tactic as it is a rather obvious red flag.

So how can we even begin to stem this problem?
Windward could be just one part of the solution, and in years to come as satellites become more cost effective, and there are more of them, we will have better data to attack the problem.
In the meantime though, it's more about raising awareness to keep pace with those becoming savvy enough to game the system on a daily basis.
One stat might go a way in helping that push.

The Windward report compares the fact that 1 percent of ships are using fake IMO numbers (a 30 percent rise on the previous year), to airport security.
1 percent is equal to several hundred vessels being "'in disguise' at any given time", which is "akin to having over 1,000 people going through John F. Kennedy International Airport each day using fake IDs".
In the context of airport safety and customs regulations, that figure would be staggering and totally unacceptable.

Apply it to the open seas and suddenly the limits of our acceptance, is vastly lowered.
Of course port authorities have a certain degree of responsibility and control.
But just as we discovered when Ebola screening was first suggested for airports and ports, it would be virtually impossible to check every ship that comes to UK shores.

One way of bringing more attention to the problem, is to get the world of finance involved.
And that's exactly what Windward hopes to do.
Daniel points that 90 percent of the world's trade happens at sea, and most of our commodities are transported that way.
And while crude imports in 2013 were estimated to be worth around $2,823 billion (£1.8bn) -- half of which were transported by sea -- Windward points that "the financial trading on this volume is estimated to be nine times larger than the transport value".
Financial trading models take into account things like commodity flows, and the false data could be leading to costly distortions.
One of the reasons oil tankers might hide their positions or depths, Windward postulates, would be to impact global oil prices.

Hamoda K’s journey to Karachi
As the two images show, the MMSI number of the Hamoda K and the Ramtin (Volga) match.
Iranian tanker hacks AIS to disguise itself off Singapore
(courtesy of gCaptain)

The reach of this problem is vast and winding.
As such, Daniel believes he and his 30-strong team has found the last "Wild West".
He refers to this phrase over and over, and it's clear why.
The technology revolution has crept up on every sector, its wildfire turning even the most traditional of industries on its head.
Considering the planet is made up of 70 percent water -- water being traversed by more than 200,000 AIS-fitted vessels everyday, from the smallest of fishing boats to cruise liners -- the fact that an accurate representation of activity on our seas escapes us, seems incredible.
"It's one of the reasons I get up in morning everyday," says Daniel.
"This isn't just another app -- this is something huge. This is all ocean trades. No one knows what's happening there, and therefore we think it's one of the last analogue domains waiting to be digitised. There's going to be a very big change. But we have to do it well, with the right data -- or there will only be more trouble."

AIS is the industry standard -- it's reliable for the purpose it's designed for.
For everything else, we need to make sure we are gaming the system too.