Solar eclipse 2015: what you need to know 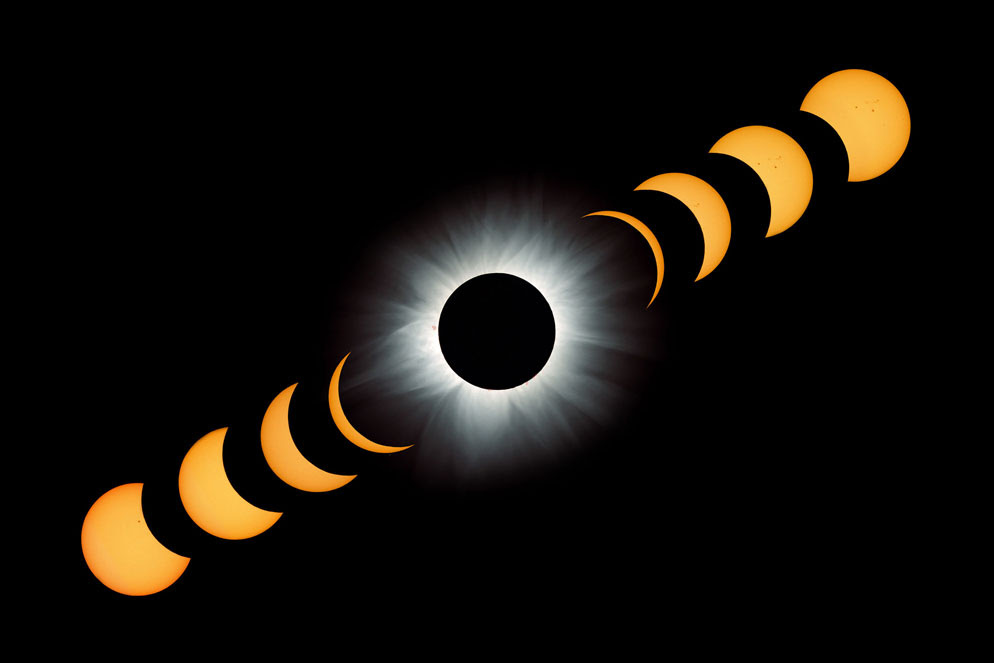 From The Guardian by Nadia Khomami

Parts of the world will witness a solar eclipse on Friday – a rare phenomenon in which the sun is completely obscured by the moon.
Here’s everything you need to know about the background of the solar eclipse, where to view it and how.

A history of eclipses

Records show that the Babylonians and the ancient Chinese were able to predict solar eclipses as early as 2500 BC, but it was a phenomenon that confounded ancient civilisations for centuries.

The Greeks believed that the solar eclipse was a sign that the gods were angry and death and destruction were on their way.
In fact, eclipse comes from ekleipsis, an ancient Greek word that means obscured, or abandoned.
A fragment of a lost poem by Archilochus (c680–645 BCE) depicted a solar eclipse as such:
“Nothing there is beyond hope, nothing that can be sworn impossible, nothing wonderful, since Zeus, father of the Olympians, made night from midday, hiding the light of the shining sun, and sore fear came upon men.”

In ancient China, the eclipse was seen to foretell the future of the emperor.
More than 4,000 years ago, two Chinese astrologers were executed for failing to predict a solar eclipse.
The Chinese people would get together during an eclipse to bang pots and pans to scare away any demons.
A variety of cultures thought the eclipse was a result of entities devouring the sun.
In Vietnam, it was thought that a giant frog was eating it, while the Vikings thought it was the fault of wolves.
Meanwhile, according to ancient Hindu mythology, the eclipse happened when the deity Rahu was beheaded by the gods for drinking ambrosia.
Rahu’s head was said to have flown into the sky, where it swallowed the sun.

How often does a solar eclipse take place?

A solar eclipse can only happen at new moon, when the moon directly blocks sight of the sun from certain places in the world.
It can take place up to five times a year, though according to Nasa, only 25 years in the past 5,000 have had five solar eclipses.
In the last 500 years there have only been eight total solar eclipses that could be seen from the UK.
The last one was in 1999, when thousands of people travelled to Devon and Cornwall to see it.
The UK will not see another eclipse until 2090.

This animation (DailyMail) is designed to appear from the 'point of view' of the eclipse as it will occur on March 20.
It shows the shadow being cast over the UK, Greenland, Europe and into Russia

Where can you see it?

The solar eclipse will take place at around 8.45am GMT and is due to last for a few hours.
Most of it will go unnoticed because its path falls over the North Atlantic and Arctic Oceans.
It will start in Greenland and move counterclockwise towards the northeast, passing over Iceland and the UK.
Phases of the eclipse will be visible from everywhere in Europe, most of northern Africa, western Asia and parts of the Middle East.
Saint John’s in Newfoundland, Canada, will also see a small bit of the eclipse at sunrise, but the rest of North America will not be able to view it.
The sun will be completely blocked out on the Norwegian islands of Svalbard, where some hotels have been booked out for the event since 2008.

One of the best places to view the eclipse will be the Faroe Isles, 200 miles (321km) off the north coast of Scotland, where the moon will cover about 98% of the sun.
In the UK, the sun will be about 98% covered on the Isle of Lewis and about 97% on Shetland.
In London, the eclipse will be at its deepest at about 9.30am, in Manchester at 9.32am and in Edinburgh at 9.35am, though this is subject to weather conditions.
The eclipse time for cities in Europe is available on eclipsewise.com, complete with a map of times and locations.

Stay safe when viewing the eclipse

Observers must take care when taking photos of the eclipse on digital devices, as eye experts have warned that doing so could cause blindness.
Skygazers have been told to not look directly at the sun when they take selfies and other photographs, as doing so can lead to burns at the back of the eye, even with the use of dark sunglasses.
Though looking at the eclipse on a screen is not dangerous in itself, it might lead to inadvertently looking at it in the process of trying to capture the perfect shot.
When viewing the eclipse, you can use a homemade pinhole camera and face away from the sun.
Londoners can also go to the Royal observatory in Greenwich from 8am, where they can join expert astronomers.
Other places setting up special equipment for viewing include the Flamsteed Astronomy Society, the Royal Astronomical Society, Baker Street Irregular Astronomers, the Hampstead Scientific Society and Northolt Branch Astro.
Alternatively, the eclipse can be witnessed from your home, as it will be broadcast live online through the Slooh Community Observatory’s website, slooh.com, from 8.30am.


Scientific implications In 1851, the first photograph of the sun’s corona was taken by the Prussian photographer Berkowski during a solar eclipse.
An eclipse also led to the discovery of helium in 1868 by the French astronomer Pierre Janssen and the British scientist Norman Lockyer, which is why it is named after the Greek word for the sun – helios.
And in 1919, a solar eclipse was used by the British astronomer and mathematician Sir Arthur Eddington to prove Einstein’s theory of general relativity.
For the latest eclipse, hundreds of astronomers are already stationed on Svalbard.
Solar eclipses provide a unique opportunity to study the sun’s atmosphere – the corona – which is much easier to observe with most of the sun’s light blotted out.

One of the biggest mysteries in astronomy is why the corona is so hot.
While the surface of the sun is only about 6,000C (a few times hotter than a blast furnace), the corona reaches 1-2mC.
The heat is not coming from the surface and scientists are working on a plausible explanation for what causes its astonishing heat.
One explanation is that twisting magnetic field lines could cause heating, but more observational evidence is needed.


The Solar Eclipse In Varanasi - Wonders of the Solar System -

The UK has 5GW of installed solar capacity, the equivalent of eight to 10 very large coal power plants.
If skies are clear on Friday morning, the European grid will suddenly lose all this power.
However, since the event is known about in advance, electricity grids are expected to cope well and no power blackouts are expected.

Other celestial events on Friday

In addition to the solar eclipse, Friday is set to see a supermoon and a spring equinox.
A supermoon refers to the moment the moon orbits at its closest to the Earth, making it look bigger than it normally does.
The spring equinox is the time of the year when night and day are of equal length, mid-way between the longest and shortest days of the year.
It is a sign that the Earth’s axis is perpendicular to the sun’s rays.
Some Christian ministers have viewed the rare collision of three celestial events as the beginning of the end of the world.