Militarization and war games in the Pacific, America to destroy paradise island : save Pagan island 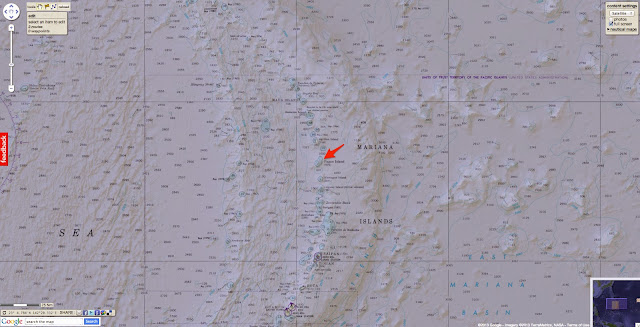 Another beautiful and valuable Pacific island has been selected by the U.S. Marines as a site for “live fire training.” Bikini, Enewetak, Kwajelein, Farallon de Medinilla, Vieques, Kahoʻolawe, Kaʻula, Diego Garcia, San Clemente … the U.S. military, especially the Navy and Marines, love islands.
They take them away from their native residents and keep them forever or destroy them with the bombs, rockets, torpedos and shells of “live fire training,” after which they return them uninhabitable.
And now they want to do it again. 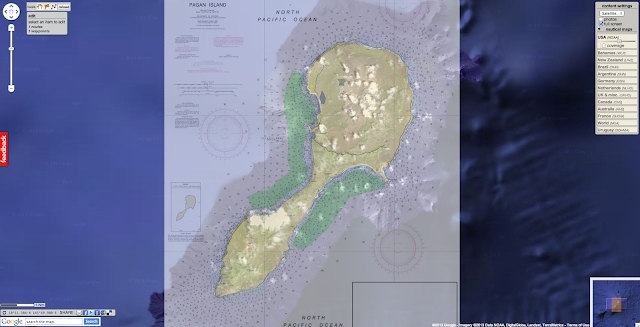 Pagan Island, a biological treasure house and ancient home to Chamorro people, sits 200 miles north of Saipan in the middle of the volcanic Northern Marianas chain of islands, about three-quarters of the way between Hawaii and the Philippines.

Only 10 miles long and one to four miles wide, Pagan (say Pah-GAN) is made up of two volcanoes. The northern one, Mt. Pagan, is still active, pouring out a near constant column of smoke and steam.
The southern volcano last saw activity in the late 1800s and retains small forests made up mainly of endemic plants that are inhabited by unique species of birds, snails and insects, as well as plants.
Pagan Island is spectacularly beautiful.

On March 14, 2013, the Department of the Navy announced in the Federal Register its “intent to prepare the Commonwealth of the Northern Mariana Islands Joint Military Training Environmental Impact Statement/Overseas Environmental Impact Statement (Federal Register /Vol. 78, No. 50 /Thursday, March 14, 2013 /Notices 16257).
This document states, “The proposed action is to establish a series of live-fire and maneuver Ranges and Training Areas (RTAs) within the Commonwealth of the Northern Mariana Islands (CNMI) to meet this purpose.”
The document specifies that only Tinian and Pagan Islands meet certain specifications, and that both are needed.
While vast areas on Tinian Islands, already military property, will be used, for Pagan Island, the plan states, “…all the preliminary alternatives for combined-level training propose using the entire island for military purposes.”
Further details of the military plans for Tinian and Pagan Islands can be found at the website established for information and comment: www.CNMIJointMilitaryTrainingEIS.com.
Regarding Pagan Island, this website states, “The U.S. military intends to use the entire island with a full spectrum of weapons and joint training activities.”
A summary of the U.S. military’s scoping report, prepared ahead of an Environmental Impact Statement, was posted on the site August 15.

In May 2010, together with seven other biologists, I spent eleven days camping on Pagan Island and carrying out extensive biological-resource surveys.
We were specifically looking for a rare tree-snail species whose entire range extends from Guam, in the south, to Pagan Island, in the north.
The species, Partula gibba, was once abundant on Guam, but has been so decimated by introduced predators and habitat destruction that it is nearly extinct on Guam and listed as ‘endangered’ by the Territory of Guam.
It survives in only single known populations on Saipan and Tinian, and has unknown numbers on islands between Saipan and Pagan.
We found this Mariana tree snail on Pagan Island, but only in the southern caldera.
There are perhaps a few hundred snails there, all living within an area no larger than about a mile in diameter.
Our genetic studies have revealed that the populations of Partula gibba are unique on each of the islands.
In addition to the tree snails, all of the birds we saw on Pagan Island belonged there; there were no introduced mynahs, cardinals, white-eyes, doves, or any of the other non-native birds that greet us on the streets of Honolulu.
Pagan Island is inhabited by the Mariana fruit bat, Pteropus mariannus, also declared endangered on Guam, and the Micronesian Megapode, Megapodius laperouse, a pigeon-sized bird that has been declared endangered throughout its range.

The proposed military activities will most certainly jeopardize Pagan and cause disturbances to its rich agriculturally and ecologically valuable topsoil, an increased risk of fire during dry summers, erosion and consequent destruction of Pagan’s coral reefs, and would risk extinction of Pagan’s unique plants and animals.
These disturbances, combined with the unexploded ordinance and toxins that are sure to be left behind, will render this island uninhabitable for centuries to come.
Pagan Island is still considered “home” by many Chamorro people who lived on the island for thousands of years.
Although the entire population of Pagan, about 60 people, was removed at the time of the last eruption of Mt. Pagan in 1981, many of them return to the island whenever possible and a few reside there continuously.
They value Pagan Island as much as any people do their ancestral homes and they want to return to claim the island as homestead land.

Earlier this month the Saipan and Northern Islands Municipal Council heard from former residents who have applied for homesteads on Pagan Island, the “Saipan Tribune” reported.
Pedro Pangelinan Castro appealed to the Commonwealth of Northern Mariana Islands Governor Eloy Inos to do everything in his power to prevent the use of Pagan as a firing range.
“I hope our elected leaders, Governor Eloy S. Inos first and foremost, will ask the military to reserve the island for future homestead applicants,” said Castro.
“I hope our leaders will take action and say no to using Pagan as a firing range. I talked to a representative of the U.S. military which wants to turn Pagan into another livefire range. The reason they are proposing that, he says, is because the Northern Islands people don’t have title to the lands that they’ve been living on for many, many years.”
Catsro moved to Pagan as an infant and lived there for 30 years before being evacuated to Saipan when the active volcano erupted on Pagan Island.
“Pagan can be used as a homestead for thousands of CNMI residents who want to build a home on their own land,” Castro said.
“There are currently a lot of pending homestead applications. My daughter, for instance, has been waiting for 19 years.”

Former residents, environmentalists and scientists are asking why any more lands, especially unique islands, should be bombed into oblivion.
Is it not enough, they ask, that much of the Hawaiian island of Kaho’olawe has been turned into bare rock by constant military bombardment for many years and that vast stretches of the island cannot be accessed because of the large number of unexploded bombs and shells that lie beneath the soil?
They are asking why the huge areas of the Pohakuloa Training Area on Hawaii Island and Schofield Barracks east and west ranges on Oahu, already bombed, strafed and shelled, are not enough land for the military to destroy for strategic training.
Is it because the military has so contaminated those areas with depleted uranium and chemical weapons that they will never be safe for manned maneuvers, they ask.

Up-to-date information about the U.S. military’s plans for Pagan Island and recent articles on local reaction to these plans from Saipan newspapers can be found at: www.savepaganisland.org.
The website also features photos taken on Pagan Island, which reveal its beauty, and a “Save Pagan Island” petition at: http://www.change.org/petitions/stop-the-military-plans-save-pagan-island