Algae overwhelms a popular beach in Qingdao, east China.
Officials use bulldozers to remove it. The algae boom may have been caused by pollution from industry.
The region has had algae booms six years in a row, but this year's is twice as big as the previous largest in 2008.
The algae is not dangerous to humans but can suffocate marine life by sucking oxygen from the water.

The seas off China have been hit by their largest ever growth of algae, ocean officials said, with vast waves of green growth washing onto the shores of the Yellow Sea.

Pictures showed beachgoers swimming and playing in the green tide in the eastern city of Qingdao, while bulldozers shoveled up tons of algae from the sand.

The State Oceanic Administration said on its website that the algae, enteromorpha prolifera, started to appear a week ago and had spread across an area of 28,900 square kilometers (7,500 square miles). The previous largest bloom was in 2008 when it affected around 13,000 square kilometers, it said.
Qingdao officials said they had removed around 7,335 tons of algae, the official Xinhua news agency reported.

The algal phenomenon is usually caused by an abundance of nutrients in the water, especially phosphorus, although the triggers for the enormous blooms that began to appear in the Yellow Sea in 2007 remain uncertain.

The China Daily quoted professor Bao Xianwen, of the Qingdao-based Ocean University of China, as saying: “It must have something to do with the change in the environment, but we are not scientifically sure about the reasons.”

The algae are not toxic nor detrimental to water quality, but lead to extreme imbalances in marine ecosystems by consuming large quantities of oxygen and creating hydrogen sulphide. 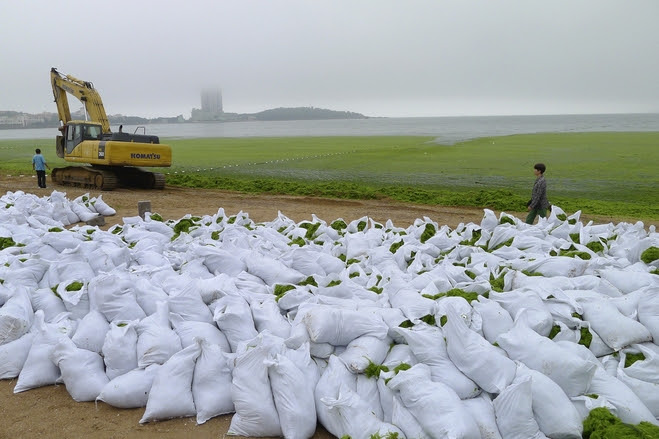 Cleaning algae off a fence near the coastline.

After a week's cleaning efforts, the biggest algae outbreak since 2008 in the coastal waters near Qingdao, Shandong province, is under control, with tourists and locals swarming to the beach once more.
Experts estimate that the algae will thoroughly vanish before August as the temperature rises.
Han Peijin, director of the No 6 sea bathing beach of Qingdao, is used to dealing with the algae every summer, and he is optimistic about the situation.
"More than 10,000 people came here on Sunday, and you could barely see the algae today," he told China Daily on Monday.
"The algae blooms last less than a month, and it's under control now."
Local authorities have launched a special team to monitor and clean up the algae.
Since June 8, 24,400 meters of netting has been laid in waters around the coasts of major tourist attractions, 230 fishing boats have collected 22,000 metric tons of algae, and 51,072 tons of algae brought ashore by waves has been removed by bulldozers.
A large number of university students also volunteered to clean up the beach. 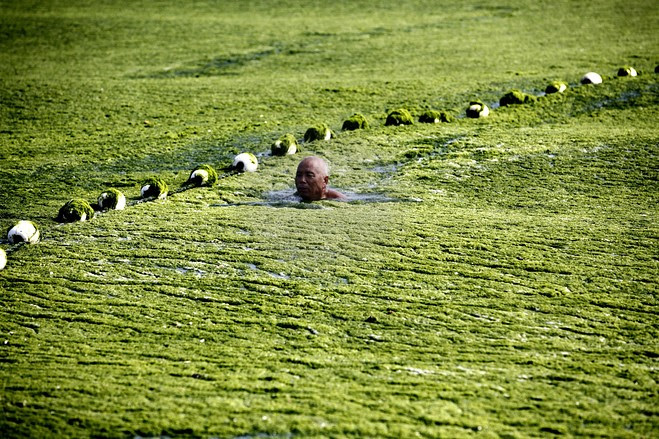 Liu Tao, an algae expert at the Ocean University of China, said the algae - or enteromorpha prolifera - will not survive when the water temperature goes above 23 C.
Thus far, the water temperature is 19 C, "therefore although it looks well today, we still have to keep alert," he said.
"Besides, a large amount of precipitation will also kill the algae. A lack of rain is part of the reason for this year's outbreak."
Pang Shaojun, another ocean university researcher, said pollution and eutrophication are the primary cause of algae blooms, and the algae appearing in Qingdao has mainly drifted from South China.

Pang also said that how to deal with algae outbreaks has become a hot research point for scientists around the world.
"Harvested" algae is transported to local processing centers and used to make feed and fertilizer by companies, including China Ocean University Organism Project Development.
The company uses algae in three ways, namely feed additives, organic fertilizers and materials for healthcare products, said Shan Junwei, president of the company.
"Since 2008 we have developed quality algae fertilizers for fruit trees, vegetables, organic agriculture and urban gardening," he said.
"Hundreds of tons of bio-fertilizers made of algae have been sold to more than 20 provinces and regions."
The company is researching a method to extract polysaccharide from the algae for nutritional products.