Five thousand metres under the sea: my journey to another world

The deep submergence vehicle SHINKAI 6500 was scheduled to dive 5,000-meter deep in the ocean for a purely scientific research purpose.
The scientific exploration was fully broadcast live on the Internet.

Five kilometres, or 3.1 miles, is not a great distance on land – the length of a pleasant stroll.
But five kilometres vertically in the ocean separates different worlds.
On 21 June I had the opportunity to make that short journey to another world, by joining Japanese colleagues for the first manned mission to the deepest known hydrothermal vents, five thousand metres down on the ocean floor.

>>> geolocalization with the Marine GeoGarage <<<<

The goal of the expedition, led by Prof Ken Takai of the Japan Agency for Marine-Earth Science and Technology, was to study the limits of life at deep-sea vents in the Cayman Trough as part of a round-the-world voyage of discovery by the research ship RV Yokosuka.
In February, I had led a British expedition investigating the same vents with a remotely operated vehicle, so I was delighted to join the team actually visiting them inside one of the few machines that can carry people beyond five kilometres deep.

Crammed into the two-metre chamber of the Shinkai6500 with pilot Yoshitaka Sasaki and co-pilot Yudai Tayama, we waited for the team on the deck of the RV Yokosuka to hook us up to the stern gantry and lift us out over the rolling blue waters of the Caribbean.
We fanned ourselves as the temperature inside our hollow metal ball rose past 30C in the tropical morning sun.
At 09.07 we were lowered gently into the water, detached from the ship, and sank beneath the grip of the waves on our journey into the void below.

Five minutes after leaving the surface, we passed 200 metres depth and entered the "twilight zone", where sunlight is already too dim for microscopic algae to thrive.
Our portholes became discs of the deepest blue imaginable – a colour eloquently described as "luminous black" by deep-sea pioneer William Beebe, after whom we named the undersea vents below.
Beebe and his colleague Otis Barton were the first people to venture into the deep ocean and see its life first-hand, when they dived in their bathysphere in the early 1930s.

At 09.29 we passed 923 metres deep – the maximum depth reached by Beebe and Barton in 1934. Moments later we entered the "midnight zone" beyond 1,000 metres deep, where not even the faintest traces of sunlight remain.
With our sub spinning slowly during descent, and an outside water temperature of 5.3C now thankfully cooling us, we were passing through one of the least-known realms of our planet: the huge interior volume of the ocean.

This is a water world without walls, inhabited by creatures of ethereal beauty.
From the vantage point of my 10-centimetre porthole, I glimpsed life forms with outlines like blown glass occasionally drifting past our lights, while small crustaceans hovered around like flies, keeping pace with our descent.
All are part of the ecology that transfers carbon from surface waters to the depths below, via the perpetual rain of particles processed by those that live here.

At 09.56 we reached 2,200 metres depth – a personal milestone, as that was the deepest I had been before, but this time not even halfway to the bottom.
Forty minutes later we passed the average depth of the oceans, at around 3,800 metres.
Finally, after free-falling through the water for two hours, we approached the seafloor at a depth of 5,099 metres, stirring up a temporary cloud of silt as we touched down.

As the silt cleared, we found ourselves on a flat plain of yellow-tinged mud, inscribed with pits, burrows and tracks by species that eke out their existence on the detritus that settles from above.
To reach the Beebe Vent Field some 400 metres away, we crept across a landscape of alien contours, shaped by processes different from those that sculpt the land.

Within a few minutes, the pool of light in front of our submersible revealed a slope of grey lava rubble, which eventually gave way to jumbled blocks of rust-coloured sulfides – the minerals formed by the deep-sea vents.
Soon afterwards, we arrived at our target site: a set of "black-smoker chimneys" at a depth of 4,967 metres.

These slender mineral spires, two storeys high, are pipes from which fluids hotter than 400C gush into the ocean.
The hot fluids are quenched by the chilly waters of the deep sea, and form a billowing plume of smoke-like particles that we can detect nearly a kilometre above.
Sitting next to this force of nature in the Shinkai6500, surrounded by vast darkness and a pressure greater than half a tonne per square centimetre, was simultaneously humbling and wonderful.

Anemones and blind shrimp found near the vents.
Credit : NERC/NOC

Through dexterous operation of the Shinkai6500's mechanical arms by pilot Sasaki-san, we quickly began collecting samples of rocks, the hot fluids from the vents, and the creatures thriving around them: speckled anemones with almost-translucent tentacles, and the orange-tinted shrimp scurrying among them.

At five kilometres deep, our time on the seafloor was limited to three-and-a-half hours, which we burned through attempting to complete our scientific "to do" list.
All too soon, the visit to the vents was over, and we began our return to the world above.
But the deep ocean had one more gift to give. With the lights switched off during ascent, I could press my face against the porthole to see the bioluminescent displays of deep-sea animals: flashes and squirts of light in the smothering darkness, triggered by the passing of our submersible.
This spectacle is usually invisible to the cameras of remotely operated vehicles, which lack the sensitivity of a dark-adapted human eye. 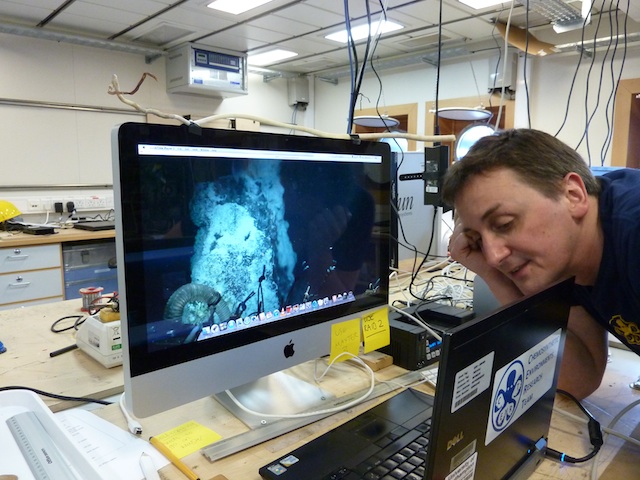 At a depth of 426 metres, I could also see faint light reflecting from a white plastic tray at the front of the submersible – the first detectable photons from the sunlit world above, heralding our imminent return.
Thanks to the thick walls of the submersible's sphere, we had no need to decompress during our ascent, because we had remained at surface pressure throughout the dive.

By 17.32 the Shinkai6500 was secure again on the deck of RV Yokosuka, where our colleagues were waiting to rush our payload to the ship's laboratories.
We hope those samples will help in projects to understand the limits of life in the ocean, and reveal more about how our planet works.
Our previous visits to these vents with remotely operated vehicles have already yielded a menagerie of new deep-sea species.

For those of us inside the sub, the opening of the hatch signaled a welcome chance to uncurl our limbs after eight hours, feel the touch of sunshine on our skin again, and answer nature's call.

The deepest point that we reached on the dive was 5,114 metres, when we travelled across the seafloor from our landing site to the vents.
Although few people have reached depths of five kilometres, that is still less than halfway to the deepest spot, the 11-kilometre Challenger Deep of the Marianas Trench.
But last year, Hollywood director and ocean explorer James Cameron visited that furthest point, more than fifty years after Jacques Piccard and Don Walsh first reached it.

After millennia of crossing the oceans in ignorance of what lies beneath, there is no longer any part of the abyss beyond our reach if we can find the will to go there.
And the deep ocean is no longer out of sight or out of mind: the day after our first dive, Prof Ken Takai broadcast live from the Shinkai6500 at the vents to an online audience of more than three hundred thousand people, who made more than half a million comments during the event.

The motives that spur our further journeys into the deep ocean will define its future.
We can go there to learn from it, or to exploit its natural resources for our rapidly expanding population.
Or perhaps for once we might achieve a balance between the two.
The challenge of the deep ocean is no longer technological; now it is a test of whether our wisdom can match our ingenuity.