From shimmering sunsets to raging seas: a year of RNLI life saving caught on camera from coasts around UK

A compilation of genuine rescue footage taken from the RNLI's lifeboats, lifeguards and Flood Rescue Team at work around the UK and Republic of Ireland throughout 2012.
RNLI YouTube videos

The bravery of our nation's lifeboat crew members has been captured in this dramatic set of pictures taken around the UK's coast.

The photos show the courageous life-saving duties of volunteers and crew in the Royal National Lifeboat Institution (RNLI).

Lifeboats submerged in stormy seas, crews returning from a weary night of work and boats battling against the waves were all entries in the annual RNLI photo competition. 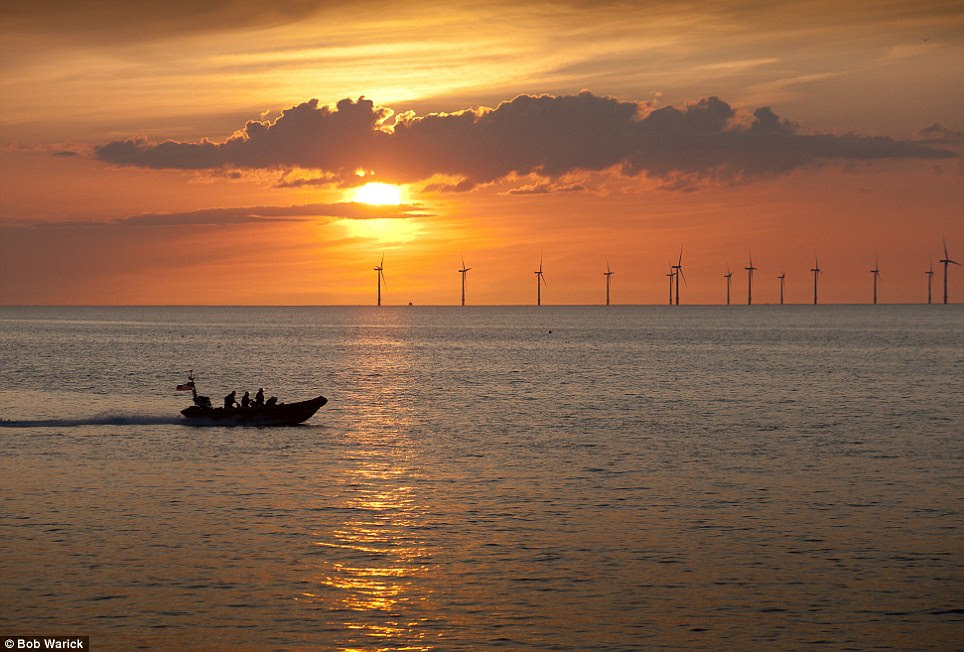 Calm before the storm: Crew member Bob Warick's photograph captures a Royal National Lifeboat Institution boat at sunset in New Brighton and won him a place in the final 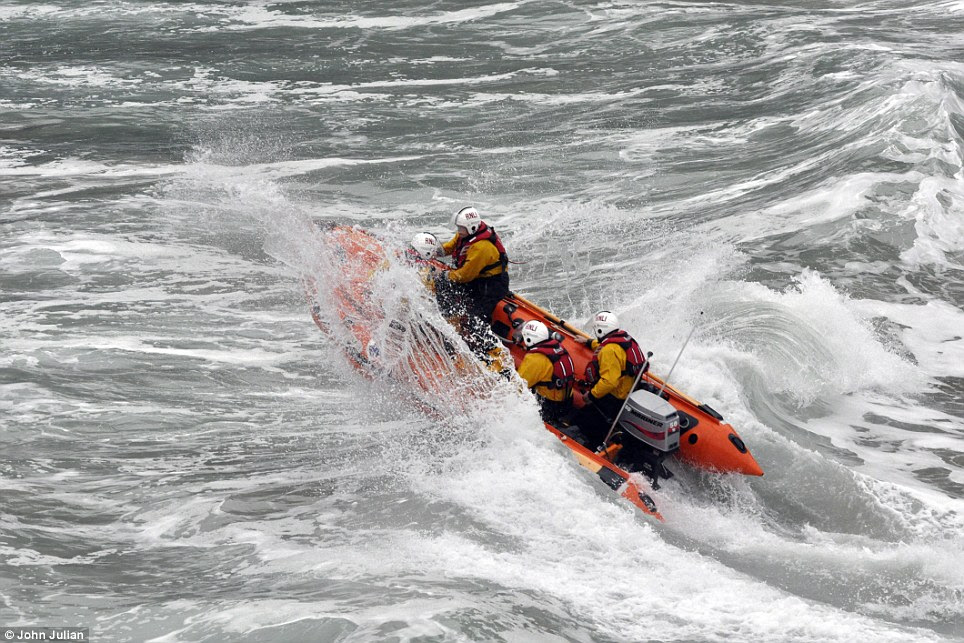 Heroic: John Julian's photograph shows a rescue boat crashing against rough water off the coast of St Agnes, in Cornwall. The photo made the final of RNLI competition 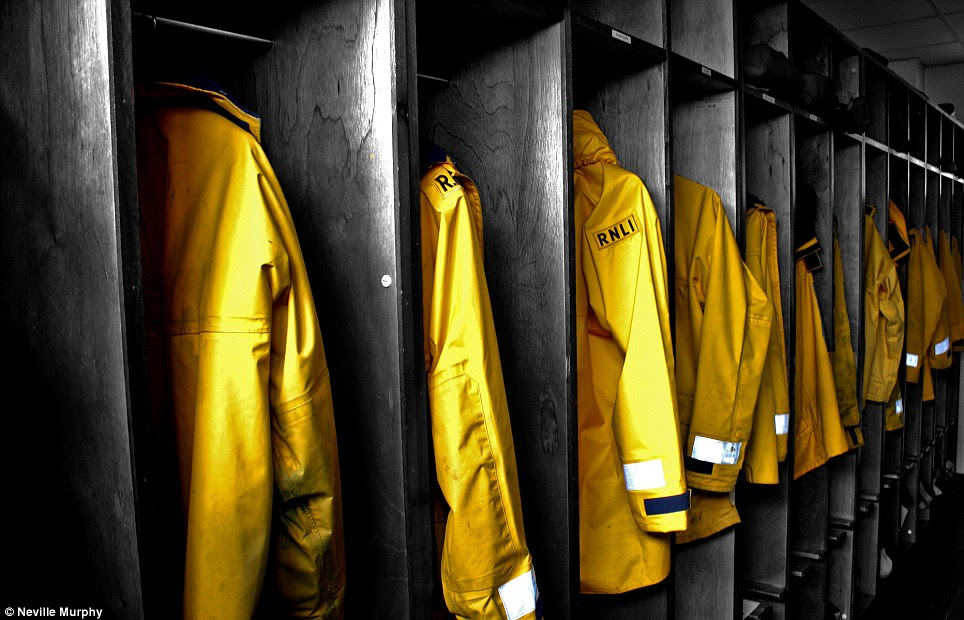 Volunteer crew member Neville Murphy, originally from Dunmore East in the Republic of Ireland, was the overall winner with his photo, The Calm, showing yellow lifeboat crew kit hanging up ready for action.
A picture of a boat's bow protruding from the sea won second place in the competition by volunteer crew member Paul Collins, from Abersoch, Wales.


His photo shows a rescue when three people had to jump overboard after their powerboat started taking on water.
When the crew arrived there was just 2ft of the boat left on view.

Rare sight: Noel Packer, a shore-helper, captured the calm after the storm as the crew arrived home after a rescue mission with a rainbow in the sky 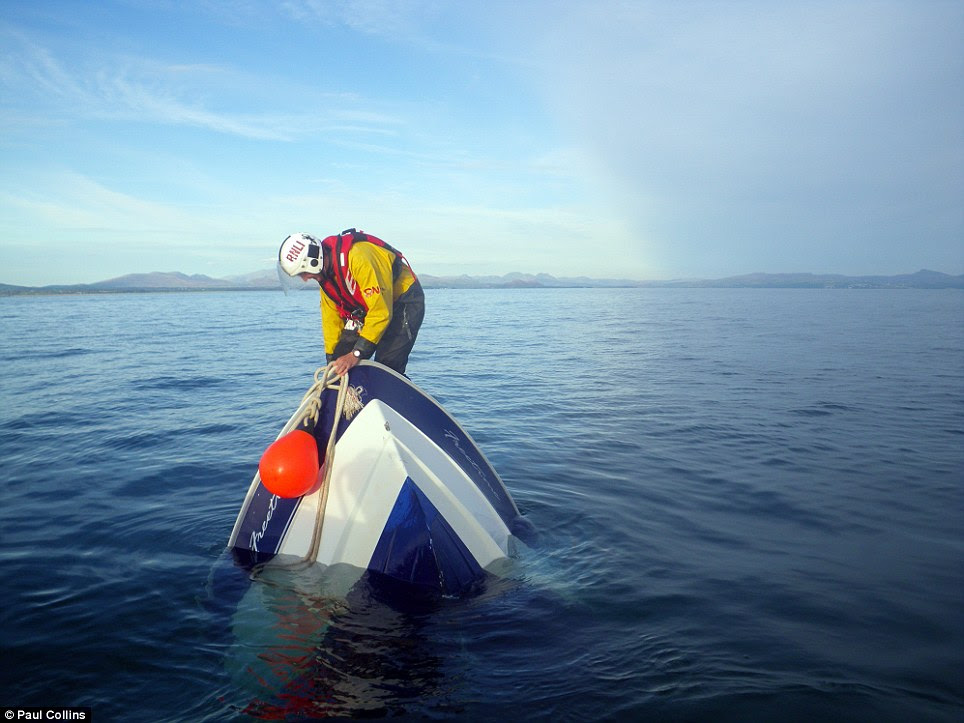 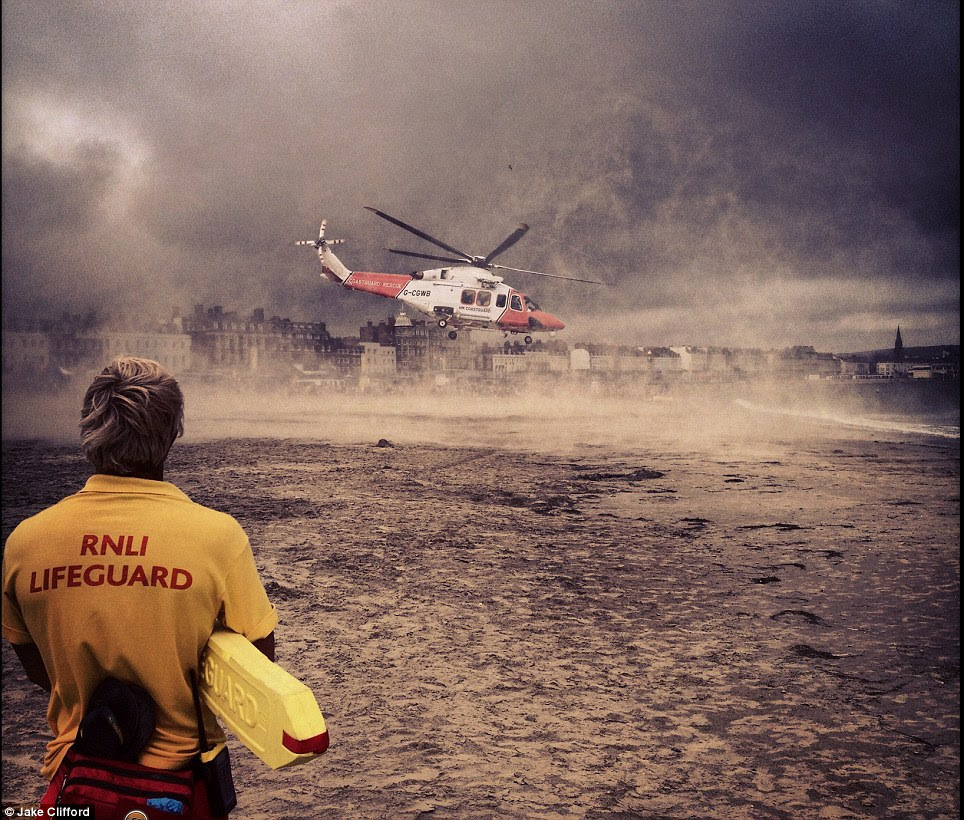 A Helping Hand, taken by Jake Clifford during a major first aid incident on Weymouth beach, came third in the in the competition which captured work of brave lifeboat crew 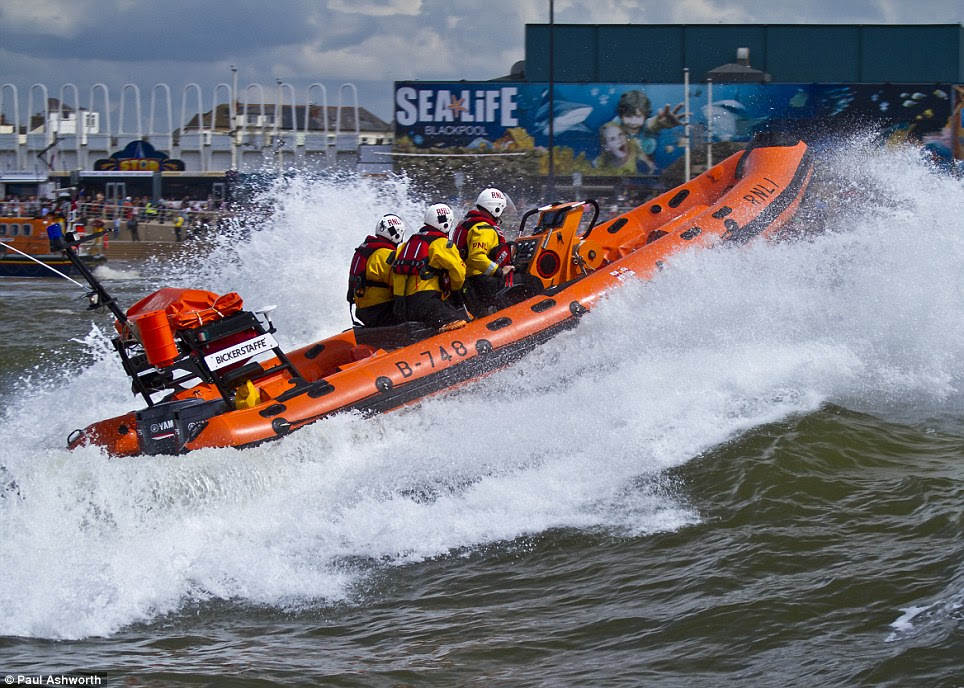 Undaunted: Paul Ashworth who is based in Fleetword captured a lifeboat tilting at 45 degrees as it powered through rough seas in Blackpool

Jake Clifford, RNLI supervisor for Weymouth and West Dorset, won third place for his dramatic photo, A Helping Hand, taken during a major first aid incident on Weymouth beach.
Jake and the other members of the crew cleared the landing site for a rescue helicopter to take the casualty to hospital.

Other photos include a lifeboat tilting at 45 degrees as it powers through the rough seas in Blackpool, taken by coxswain Paul Ashworth, based in Fleetwood.
Another has been taken at an angle by second coxswain Stuart Tibbett through a sea-splattered lens as the lifeboat rushes to an incident in Bridlington, East Yorkshire. 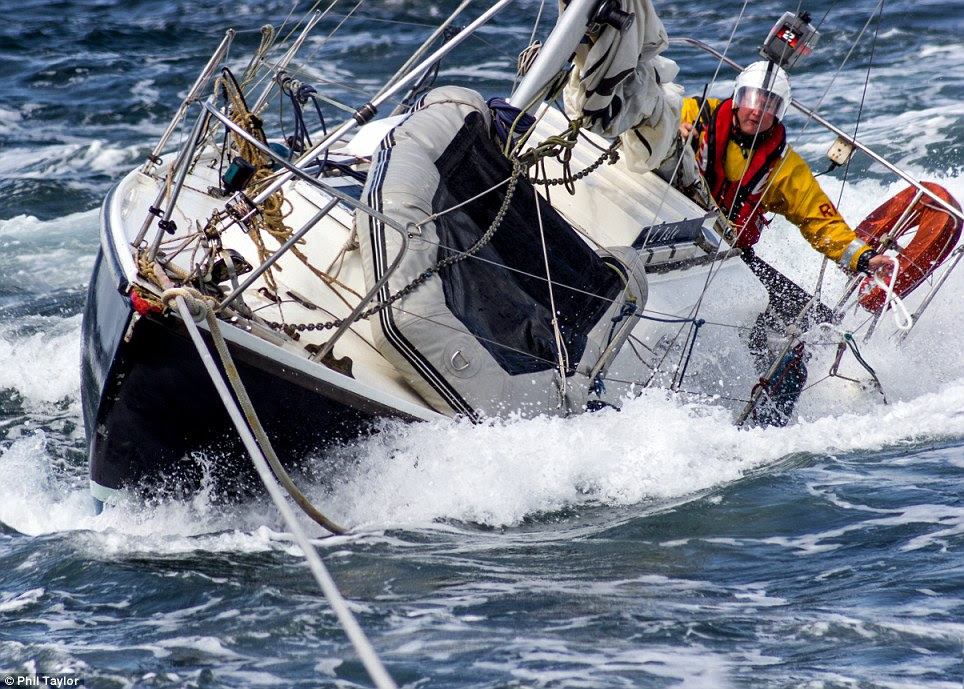 Courageous: Lifeguard Phil Taylor snapped this photo of a yacht being towed in Weymouth beach, Dorset , in stormy seas, which made it to the final of the competition 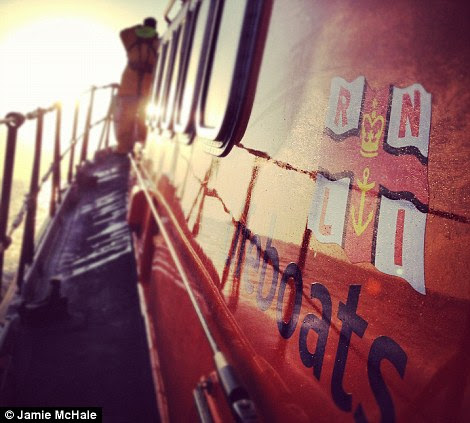 while Jamie McHale snapped the side of his lifeboat in Bridlington 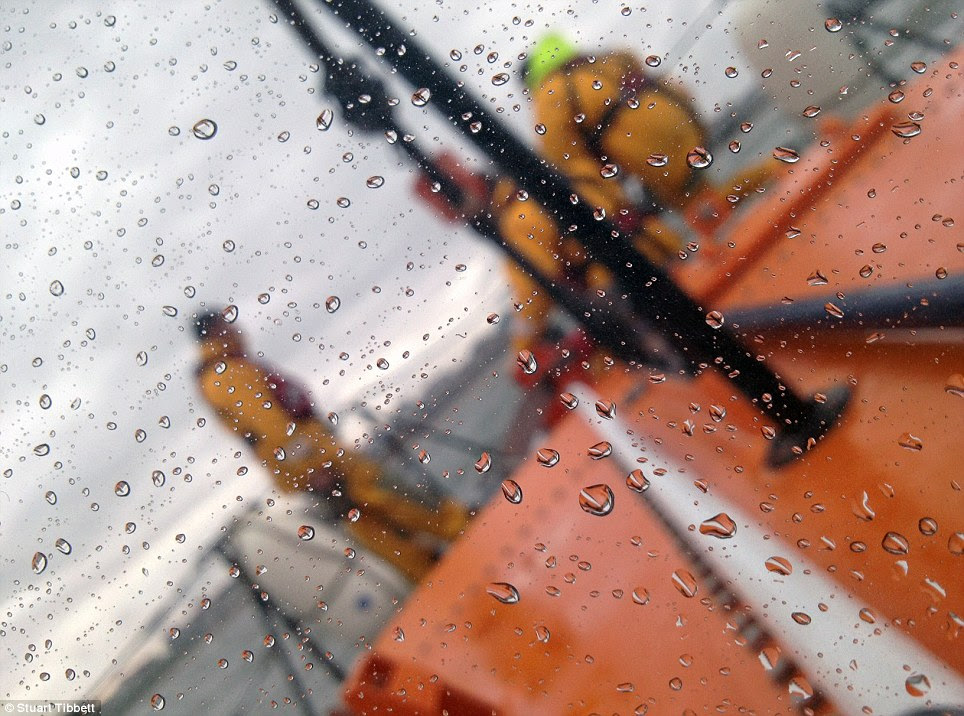 Second Coxswain Stuart Tibbett took this picture through a sea-splattered lens as the lifeboat rushes to an incident in Bridlington, East Yorkshire

Noel Packer, a shore-helper in Dungeness, Kent, has captured the calm after the storm as the crew arrives home after a rescue mission, with a rainbow in the sky behind them.
While inshore crew member Phil Taylor's photo shows a boat being towed in at Weymouth beach in Dorset.

The RNLI is a charity which provides a 24-hour lifeboat search and rescue service.
It has saved more than 139,000 lives since its foundation in 1824 as the National Institution for the Preservation of Life from Shipwreck.
The name was changed to the Royal National Lifeboat Institution in 1854, and cork life jackets were first issued to crew members in the same year.
The 20th century saw the RNLI continue to save lives at sea through two world wars.
Lifeboats moved from sail and oar power to petrol and diesel and the first women joined their crews.
Recent years have seen a significant expansion of the service with the introduction of RNLI lifeguards.
A spokesman for the RNLI said: 'The RNLI encourages its volunteer crews and lifeguards to take photos when possible, to illustrate the lifesaving work they do and help build public support for the charity.'
Posted by Peio at 1:09 AM