Incredible image that reveals dust, salt and smoke in the Earth's atmosphere - and supercomputer that made it could improve weather forecasting

The extinction optical thickness of aerosols from a free running 10-km GEOS-5 Nature-Run including dust (red), sea salt (blue), black and organic carbon (green) and sulphate (white) are depicted from August 2006 through April 2007.
GEOS-5 was run with the GOCART model providing feedbacks of the direct radiative effects of aerosols within the model in addition to their advection by the weather within the simulation.
Sea-salt (blue) is churned up from the ocean based on surface wind speeds, and most prevalent along mid-latitude storm tracks and frontal regions (including the Southern Ocean) and within the circulation and eye of tropical cyclones.
Dust (red) is most prominent over the Saharan desert and can be seen interacting with a few Atlantic tropical cyclones during the end of the 2006 Atlantic hurricane season.
Organic and black carbon (green) are dispensed into the atmosphere from biomass burning, the most prominent for this period being over South America from Aug-Oct 2006, Indonesia from Sept-Nov 2006, Africa in January 2007.
Sulphate (white) can be seen from two primary sources, those being fossil fuel emissions over Asia, Europe and the US, and also from volcanic emissions, there is a persistently active volcanic emission from Mt Nyiragongo in Mozambique Africa, and then a large eruption from the Karthala Volcano on Grand Comore Island, Comoros in January of 2007.

It is an astonishing view of the Earth that reveals just what is in the atmosphere.
This image, released by Nasa, was created by a supercomputer designed to model aerosols in the Earth's atmosphere.
It shows how dust, sea salt, smoke and sulphates travel - and could dramatically improve weather forecasts.

The Nasa image shows aerosols in the atmosphere.
Dust (red) is lifted from the surface, sea salt (blue) swirls inside cyclones, smoke (green) rises from fires, and sulfate particles (white) stream from volcanoes and fossil fuel emissions.
The high-resolution global atmospheric modeling was done using the Discover supercomputer at the NASA Center for Climate Simulation at Goddard Space Flight Center in Maryland.

Nasa said the facility 'provides a unique tool to study the role of weather in Earth's climate system.

Goddard Space Flight Center is the home of a state-of-the-art supercomputing facility called the NASA Center for Climate Simulation (NCCS) that is capable of running highly complex models to help scientists better understand Earth's climate.
This short video introduces the NCCS and takes you behind-the-scenes into the fascinating field of climate modeling.
Using supercomputers to process data from satellite observations, these models are used to predict weather and give a picture of how the Earth's systems and climate are changing.

The Goddard Earth Observing System Model, Version 5 (GEOS-5) is capable of simulating worldwide weather at resolutions of 10 to 3.5 kilometers (km).
This portrait of global aerosols was produced by a GEOS-5 simulation at a 10-kilometer resolution.
Dust (red) is lifted from the surface, sea salt (blue) swirls inside cyclones, smoke (green) rises from fires, and sulfate particles (white) stream from volcanoes and fossil fuel emissions. 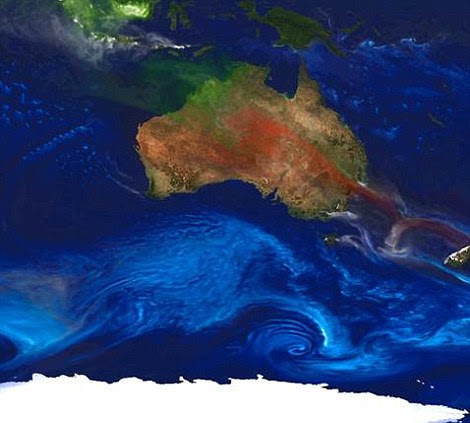 Dust, in red, swirls over Europe, while close to the Australian coast, sea salt (blue) is clearly visible 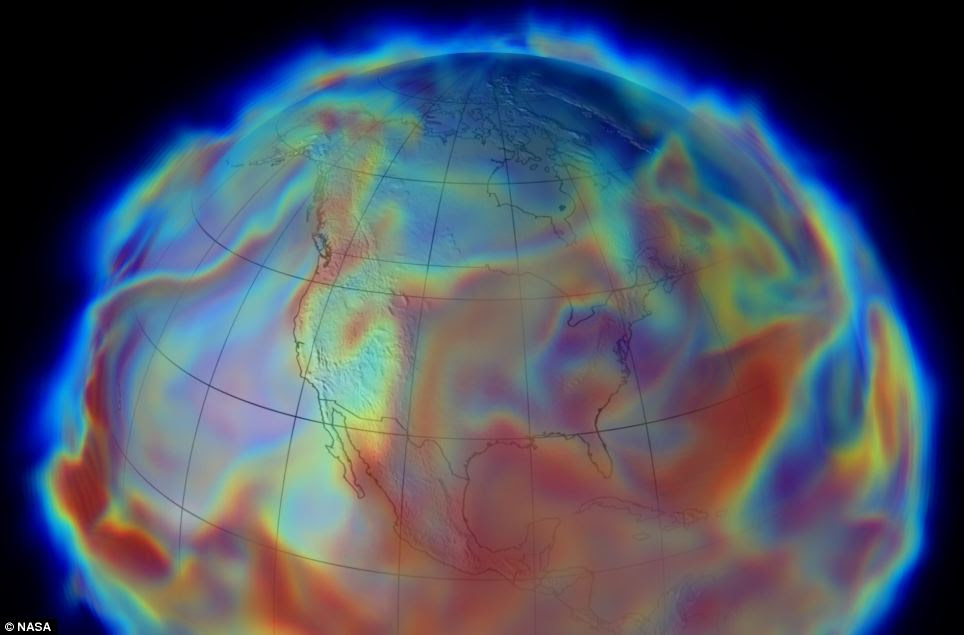 The supercomputer has previously been used to recreate major weather events, such as this image of the humidity on June 17, 1993, during the Great Flood that hit the Midwestern United States
Posted by Peio at 1:12 AM