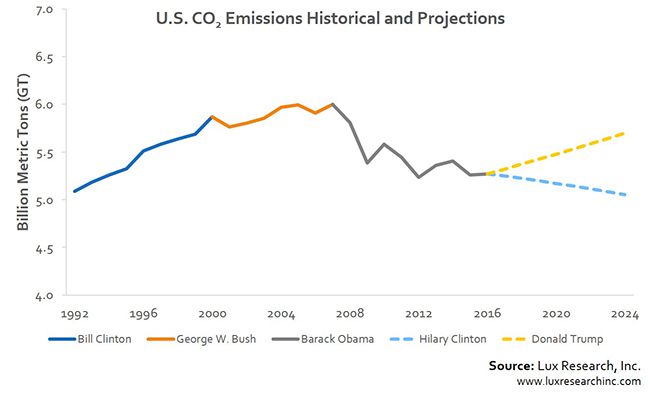 Mr Trump has previously described climate change as 'fictional' and 'created by the Chinese'
A new study by Lux Research projects that Trump would reverse eight years of declining emissions under the Obama administration.

From The Independant by Adam Withnall

World's most influential climate champion elects man who does not believe in the science behind man-made climate change, and has threatened to 'cancel' the Paris Agreement

Climate experts who have been nervously watching the US election from the UN summit in Marrakech will now go into crisis mode at the news that Donald Trump will be the next President of the United States.

Many attendees stayed up through the night to find out whether a man who has previously described “the concept of global warming” as being “created by and for the Chinese” will be named the most powerful leader in the world.

The Morocco summit has seen representatives from around the world gather to discuss how last year’s groundbreaking Paris Agreement will be implemented in practice.

But Mr Trump has previously stated that he wants to dismantle the accord, which aims to limit global warming to within 2C, suggesting the US should not waste "financial resources” on tacking the issue.

What Trump has said about climate change

The new US President has tweeted dozens of times about how he does not accept the overwhelming scientific evidence that man-made climate change is real.

Asked about his views on ScienceDebate, he said: "There is still much that needs to be investigated in the field of 'climate change. We must decide on how best to proceed so that we can make lives better, safer and more prosperous.”

The issue of climate change came up only once in the three live US presidential debates between Mr Trump and his defeated opponent Hillary Clinton.

Ms Clinton said she wanted to make America “the clean energy superpower of the 21st century”, and added: “Donald thinks that climate change is a hoax perpetrated by the Chinese. I think it's real… I think science is real.” 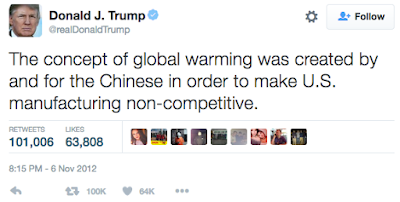 Whether this gives hope to climate experts that Mr Trump could change his position, or concern that the new US President would say something evidently untrue on live TV, remains to be seen.

How will President Trump impact the climate?

Patricia Espinosa, the UN’s top climate official, said last month that there was “no plan B” for the event of a Trump presidency. 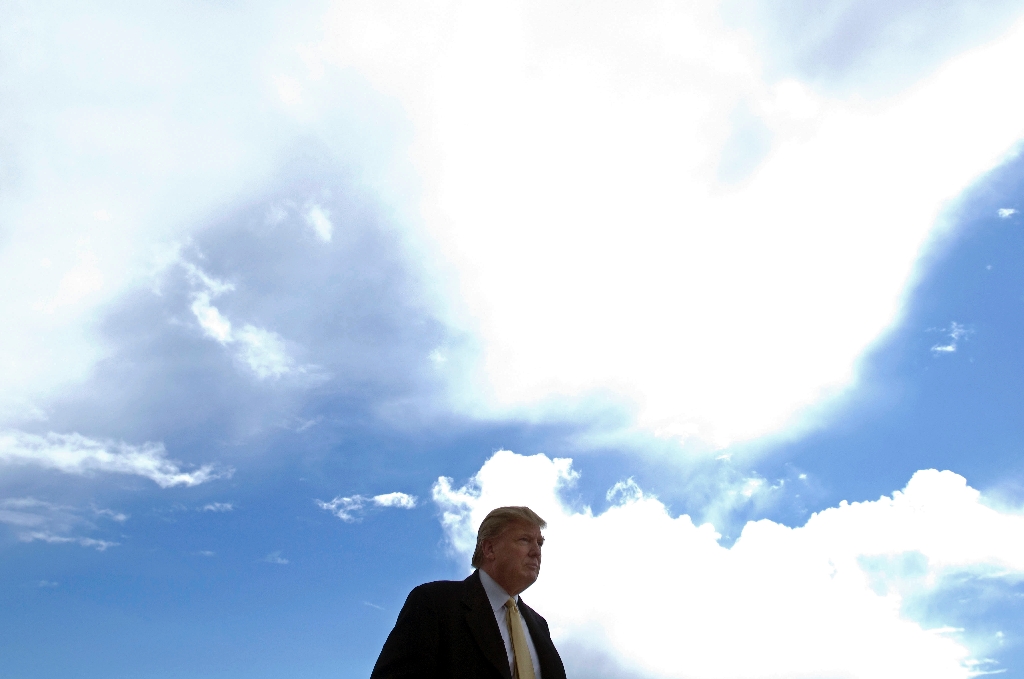 Speaking to Climate Home, she admitted the US election result would have serious “implications” for how the world tackles dangerous climate change.

But climate officials have also been bullish since the start of the COP22 summit, saying there is no going back on the Paris Agreement.
“I think everyone in the world is following the election process because of the implications, and we are vigilant, but it’s important to bear in mind the Paris Agreement has an incredible amount of legitimacy,” Ms Espinosa said.
“It remains a treaty that is in force. What we will do is be vigilant and attentive.”

In a report released at the summit on Tuesday, experts warned that the global climate had shown an "increasingly visible human footprint” in the last five years.
The World Meteorological Organization, the UN’s weather agency, said 2011-2015 was the hottest five-year period on record, and that many extreme events during the period were made more likely as a result of man-made climate change.
"The evidence is overwhelming," said Chris Field, director of the Stanford Woods Institute for the Environment.
"The new report from WMO is a clarion call for embracing and going beyond the goals of the Paris Agreement.”

How possible that is, with Donald Trump as US President, remains to be seen.

Posted by geogarage at 9:29 AM