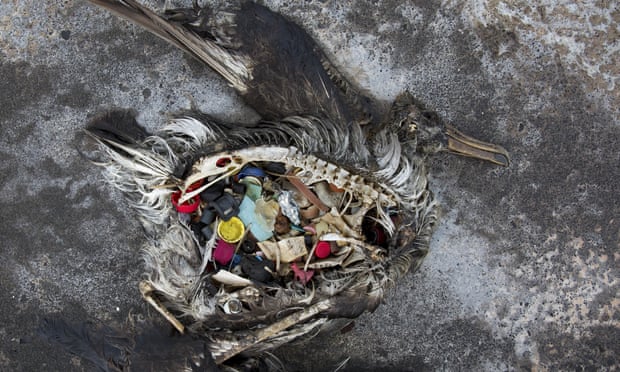 Birds and other marine creatures ingest plastic and this can lead to damage to internal organs, gut blockages or chemical build-ups in tissues.
Photograph: Dan Clark/USFWS/AP

Algae on drifting plastic waste gives off a sulfur compound which smells similar to the krill many marine birds feed on, researchers have discovered

Seabirds are enticed into eating plastic debris because it smells like their food, according to scientists.
The study found that drifting plastic waste accumulates algae and gives off a smell very similar to the krill that many marine birds feed on.

The findings could explain why certain birds - including albatrosses and shearwaters - which rely on their sense of smell for hunting, are particularly vulnerable to swallowing plastic.
Matthew Savoca, the study’s lead author at the University of California Davis, said: “Animals usually have a reason for the decisions they make.
If we want to truly understand why animals are eating plastic in the ocean, we have to think about how animals find food.”


CNN gained rare access to Midway Atoll to see the shocking amounts of plastic that makes its way across the Pacific Ocean and into our food chain.

The rate of plastic pollution is steadily increasing worldwide, with one study last year estimating that about eight million metric tons of plastic - enough to cover every foot of coastline in the world - is enters the oceans annually.
It is known that birds and other marine creatures, including turtles and fish, ingest plastic.
This can lead to damage to internal organs, gut blockages or build-ups of chemicals from the plastics in the animals’ tissues.
Previous studies have shown that some birds feed their young bits of waste - presumably mistaking it for food.
To investigate what attracts birds to debris, the scientists put beads made from the three most common types of plastic - high-density polyethylene, low-density polyethylene, and polypropylene - into the ocean at Monterey Bay and Bodega Bay, off the California coast.
The beads were sewn into mesh bags and tied to buoys to avoid any of them being eaten by wildlife.
Three weeks later, the beads were collected and the smell they gave off was analysed at the UC Davis Robert Mondavi Institute for Wine and Food Science, where scientists normal focus on the chemistry behind the flavour and fragrance of wines.
The plastic was found to give off a sulfur compound, dimethyl sulfide (DMS), linked to the algae which coated the floating plastic.
The same team had previously shown that DMS is the chemical cue that triggers certain seabirds to forage for krill - or as the scientists put it “the birds’ version of a dinner bell”.
It is this cue that is being hijacked by the plastics.


The world ocean's food chain is being polluted with plastics.
This program has won the Ocean Film Festival Award of Excellence at the NOAA sponsored Gray's Reef National Marine Sanctuary film festival.

In a second piece of analysis, using data from 55 studies and 13,315 birds, the scientists showed that seabirds that track the scent of DMS to find prey - a group known as tube-nosed seabirds and which includes albatrosses, petrels, and shearwaters - are nearly six times more likely to eat plastic than other birds.

Birds could be better protected in future, the scientists argue, by creating plastics that do not accumulate algae as readily in the sea.
Berry Mulligan, international marine programme officer at the Royal Society for the Protection of Birds, said: “While research such as this is raising the alarm about plastics in our oceans, it is hard to realistically estimate the magnitude of the problem for seabirds at a global level.
Seabirds are one of most threatened groups of birds in the world, but untangling the effects of multiple threats to seabirds is a challenge, one which underlines the importance of ongoing research such as this which helps determine vulnerability of different species.”
The findings are published in the journal Science Advances.