A video(2x speed) of a Rhizaria under a phase contrast microscope with 1000x zoom.

A team of marine biologists and oceanographers from CNRS, UPMC1 and the German organization GEOMAR have revealed the importance in all the world's oceans of a group of large planktonic organisms called Rhizaria, which had previously been completely underestimated.
According to their findings, these organisms make up 33% of the total abundance of large zooplankton in the world's oceans, and account for 5% of the overall marine biomass.
The study was carried out on samples collected during eleven oceanographic campaigns (2008-2013) covering the world's main oceanic regions, and included the Tara Oceans expedition.
It is published on 20 April 2016 on the website of the journal Nature (print edition 28 April2 ).

Although invisible to the naked eye, marine plankton play a key role in the balance of our planet.
Still largely unexplored, they consist of an astonishingly wide variety of tiny organisms that produce half the Earth's oxygen and form the base of the oceanic food chain that feeds fish and marine mammals.
Rhizarians, from their Latin name Rhizaria, are a group of large planktonic organisms whose importance had been overlooked until now.
Most estimates of the distribution of marine organisms are performed locally (in a defined marine area) and are based on collection with plankton nets.
However carefully carried out, this operation can damage certain fragile organisms such as rhizarians, preventing their identification.

Marine biologists and oceanographers have pooled their skills with the aim of analyzing samples collected during eleven oceanographic campaigns from 2008 to 2013, using a less destructive method, namely an underwater camera deployed at depth.
This in situ imaging system, which involved no collection, was used to study the organisms directly in their environment without damaging them.
In all, sampling was carried out at 877 stations (corresponding to 1 454 immersions of the camera down to 1 500 meters), covering the world's main oceanic regions. In total, the scientists analyzed 1.8 million images in order to quantify the abundance and biomass represented by Rhizaria3. 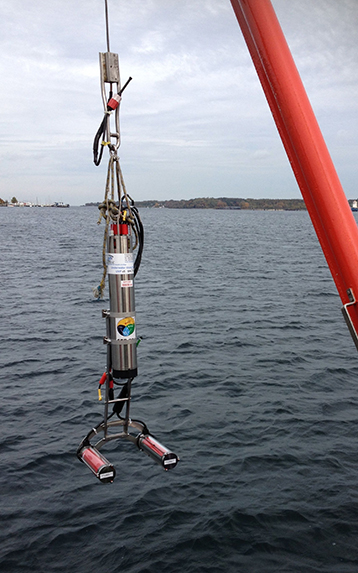 
Deployment of the underwater camera used in this study.

The results were surprising: their estimates unequivocally show that Rhizaria make up more than a quarter of the total abundance of the world's large zooplankton.
They also found that they account for 5% of the total biomass in the oceans (taking into account all organisms, from plankton to whales).
The presence of Rhizaria in all the planet's oceans had previously been completely overlooked. However, they are unevenly distributed: these giant plankton are predominant in the nutrient-poor regions (located at the center of the large oceans) that cover most of the ocean area.
This distribution could be explained by Rhizaria's ability to live in association (symbiosis) with microalgae, just like coral.
In symbiosis, the partnership between organisms is based on mutual exchange of food: by directly benefiting from the products of photosynthesis, Rhizaria are able to survive in nutrient-deficient waters.
Plankton are gradually giving up their secrets, unveiling unsuspected wealth and diversity. 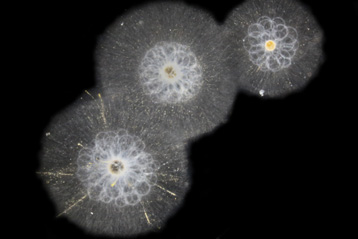 © Tristan Biard, Station biologique de Roscoff (CNRS/UPMC)
Three rhizarians (Rhizaria) seen through an optical microscope.
The small yellow dots seen around the periphery of the organisms are symbiotic algae.
Each organism has an average size of 0.2 to 1 centimeter.
These types of Rhizaria are solitary and do not form colonies. 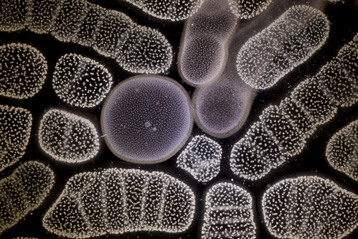 © Christian Sardet, Observatoire Océanologique de Villefranche (CNRS/UPMC)
Overall view of rhizarians forming colonies (seen in optical microscopy).
Each white dot is an individual member of the colony.
The colonies can reach a size of several centimeters.
They were collected in the Mediterranean by the Observatoire Océanologique de Villefranche-sur-Mer. 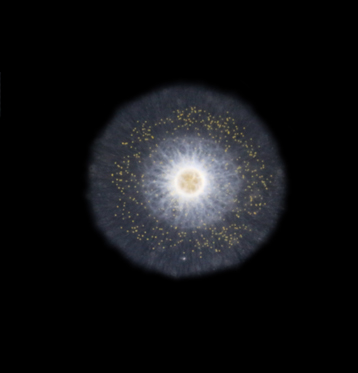 Notes:
1 In the “Adaptation et Diversité en Milieu Marin” laboratory (CNRS/UPMC) at the Station Biologique de Roscoff and the Laboratoire d'Océanographie de Villefranche (CNRS/UPMC) located at the Observatoire Océanologique de Villefranche (southeastern France).
2 This work will be published in the print edition in the same issue of Nature as the study carried out by Guidi et al. (View web site)
3 Those considered in this article have a size comprised between 600 µm (0.6 mm) and a few centimeters (which is large for plankton). The smallest and largest Rhizaria are therefore not taken into account in this study. These estimates are therefore likely to considerably underestimate their real contribution to biomass.