Can you spot all the sea monsters in this 16th-century map?

Carta marina, a wallmap of w:Scandinavia, by Olaus Magnus.
The caption reads : Marine map and Description of the Northern Lands and of their Marvels, most carefully drawn up at Venice in the year 1539 through the generous assistance of the Most Honourable Lord Hieronymo Quirino.

The creatures depicted on land in the 16th-century Carta Marina are not particularly unusual: the map's lands contain knights on horseback, wild boars and bears climbing trees.
The west side of the map, however, shows a much more fanciful plethora of wildlife.
Cartographer Olaus Magnus created the Carta Marina while staying in Rome, between the years 1527 and 1539.
However, Magnus was originally from Sweden, and chose to depict the Nordic countries in his map.
The Carta Marina was one of the most precise depictions of any part of Europe at the time—although its portrayal of the oceans was not quite as accurate.
The northern seas on the map are filled to the brim with all kinds of aquatic monsters.
Some maps of the era depicted dragons to metaphorically indicate uncertainties or dangers in a region.
But the Carta Marina's mythological sea creatures were thought to really exist at the time Magnus drew them.
He even identified each creature in the map's key.
You can take a closer look at some of them below. 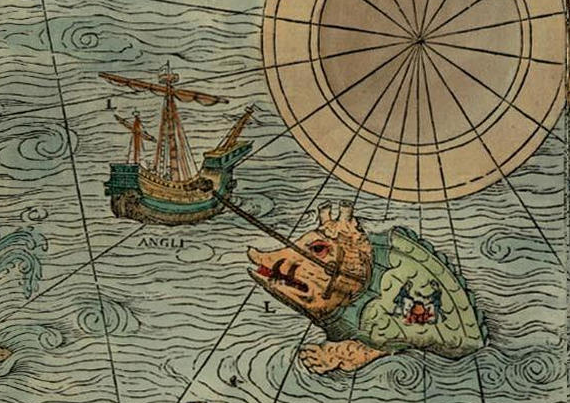 Unsuspecting sailors cook a meal on a sea monster off the coast of Iceland.

Magnus described this creature as a whale whose skin resembled the sand on a seashore.
An English ship is depicted as having laid anchor on the whale, and two unwitting sailors are cooking a meal on its rump. 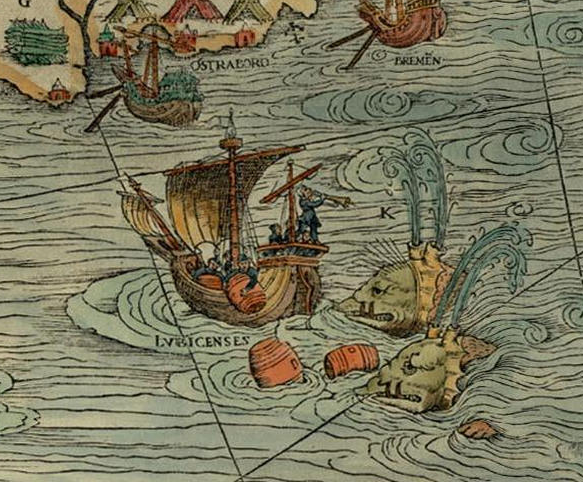 Just beneath Iceland, the Carta Marina offers up a curious sight: a sailor aboard a ship, playing the trumpet for two sea monsters.
The sounds, along with the empty barrels shown, could have been a futile attempt to scare away the attacking beasts. 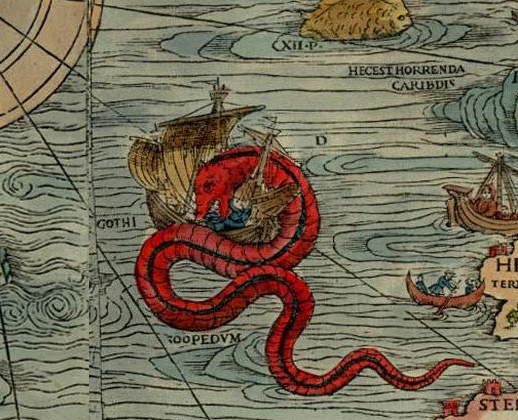 A vividly red sea serpent envelops a ship that came too close for comfort.

Magnus explained that the fearsome sea serpent above was over 200 feet long, and over 20 feet thick, and lived off the coast of Bergen, within its caves and hollows. 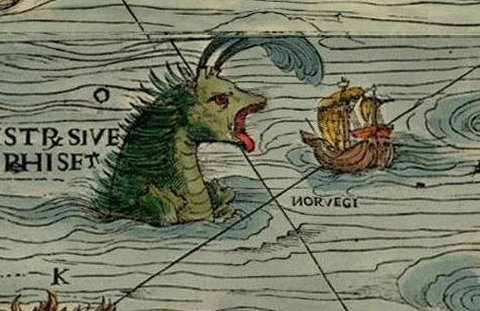 The infamous Leviathan appears on the western edge of the map.

One of the more recognizable shapes on the Carta Magna is the Leviathan, a sea monster that has been documented since the Old Testament days.
In the map, only the creature's head is shown emerging from the sea, but Magnus describes its whole length to be over 300 feet long. 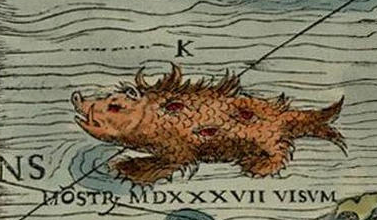 If pigs could swim...

If pigs could swim, this is what they would look like.
Below the Leviathan is a "monstrous pig" that is claimed to have been spotted in the North Sea in 1537. 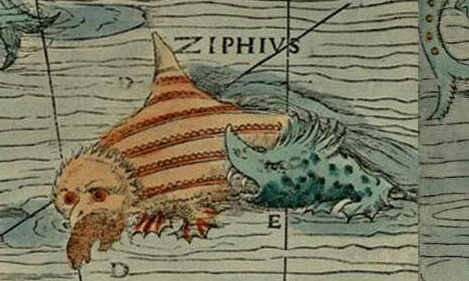 One can hardly ignore this bizarre swimming owl, the xiphias, which is being attacked by a rhinoceros-type creature that sinks ships by swimming beneath them and cutting into their hulls. 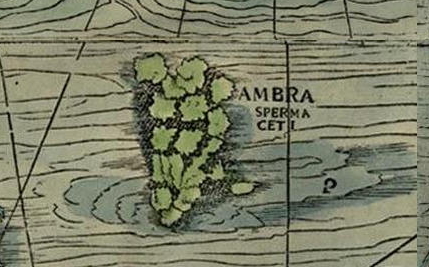 Ambergris is a highly valuable substance even today.

This is not technically a monster, but rather an absurd phenomenon.
These green lumps make up a large chunk of ambergris, a highly prized mix of whale vomit and feces that still sells for exorbitant prices today.