Scientists say new channel will herald arrival of more invasive species,
with potentially harmful impact on region as a whole
The human activities/interventions mostly responsible for marine biological invasions in the Mediterranean Sea:
(1) the opening of the Suez Canal connecting the Red Sea and the Mediterranean;
(2) shipping (the color of the marine area indicates the intensity of maritime activities: blue is low, red is high ;
(3) aquaculture (surveyed in 2006; red dots: shellfish; yellow dots: fish cages).

The continuing expansion of the Suez canal risks causing serious harm to marine lifeforms and economic activity in the Mediterranean sea, scientists are warning.

Egypt is building a second “lane” to the Suez canal, as well as widening the existing channel, in an “ominous” scheme scientists fear could allow greater numbers of non-indigenous species to enter the Mediterranean and endanger the native ecosystem.

“The enlargement of the canal will increase the number of invasions from the Red Sea resulting in a diverse range of harmful effects on the ecosystem structure and functioning of the whole Mediterranean sea, with implications to services it provides for humans,” Bella Galil, a marine biologist at Israel’s National Institute of Oceanography, told the Guardian.

Writing in the Biological Invasions academic journal, Galil and 17 colleagues accept that the expansion will go ahead despite their concerns, and acknowledge that the revenues from an enlarged canal are likely to bring Egypt a much needed economic boost.

But they ask Egypt to first conduct an impact assessment to determine the project’s likely environmental footprint, and any preventive measures to mitigate the dangers ultrasound, and increased salinity in certain parts of the canal.

There are about 700 non-indigenous species in the Mediterranean, according to the scientists, about 350 of which have entered from the Suez Canal since its construction in the late 19th century.

Some of these species “are noxious, poisonous, or venomous and pose clear threats to human health”, while others have destroyed the habitats of local creatures.

Among the most destructive recent entrants from the Suez is the silver-cheeked pufferfish, a non-native fish containing toxic chemicals that has caused several people to be treated in hospital in the eastern Mediterranean in the past 10 years.
Two kinds of herbivorous rabbit-fish – the dusty spine-foot and its cousin the marbled spine-foot – have destroyed vast swaths of underwater seaweed forests in the eastern Mediterranean, after migrating through the Suez in recent decades. 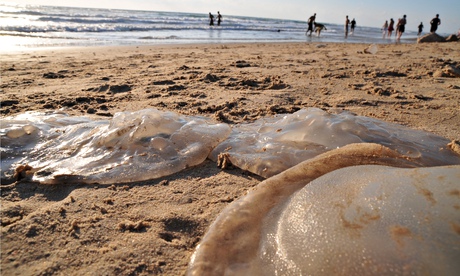 Perhaps the most dangerous newcomer is the nomad jellyfish, orRhopilema nomadica.
Once only found in tropical waters, the nomad jellyfish invaded the Mediterranean via the Suez in the 1970s.
Now its vast swarms, which can measure tens of miles in width, frequently make commercial fishing impossible and have sometimes closed tourist beaches lining the Mediterranean for days at a time.

“This isn’t just about the effect on other species,” said Stefano Piraino, a jellyfish expert at the University of Salento, and one of the 18 signatories.
“We’re talking about a threat to human life and human activity, including tourism, agriculture, and fisheries.”

Richness (number of species in a 10 × 10 km grid) of marine alien species introduced in the Mediterranean Sea through the Suez Canal (Lessepsian immigrants).
Map was produced by EASIN's mapping widget.

Some of the jellyfish have temporarily disabled power stations lining the eastern Mediterranean, after the swarms became stuck in the stations’ seawater-powered cooling systems.
Nearby fishermen have found their catches ruined for similar reasons. “Jellyfish can be 90% of the catch – and the remaining fish are very damaged, so the value of the fish is greatly reduced,” said Piraino.

This year, researchers at the university of East Anglia estimated that jellyfish from the Suez would cost fishermen in the northern Adriatic sea – which is only a small part of the Mediterranean – €8.2m (£6.5m) in financial losses.

The 18 scientists have called on signatories to the Convention of Biological Diversity, a UN-organised pledge to conserve the world’s ecosystems, to press Egypt to conduct an impact assessment into the environmental effects of the canal expansion.

Responding to the call, Braulio Ferreira de Souza Dias, executive secretary of the convention on biological diversity, acknowledged the potential environmental and socioeconomic effects of the Suez expansion, and asked Egypt to implement an environmental assessment.
“We trust that, as party to the Convention on Biological Diversity, Egypt will adhere to its obligations,” Dias told the Guardian.

This giant project will be the creation of a new Suez Canal parallel to the current channel of a total length of 72 kilometers (44.74 miles).
The new channel, part of a larger project to expand Suez port and shipping facilities, aims to raise Egypt’s international profile and establish it as a major trade hub.

Construction of the bypass, dubbed the “new Suez canal” by the Egyptian government, began in August.
It will allow two-way traffic for 45 miles of the canal’s 120-mile length, creating room for more ships, and potentially more revenue for cash-strapped Egypt.

The project has been warmly received by many Egyptians, who contributed 80% of the 64bn Egyptian pounds (£5.6bn) raised to build the new canal, after the government promised them a 12% annual yield on their investment. 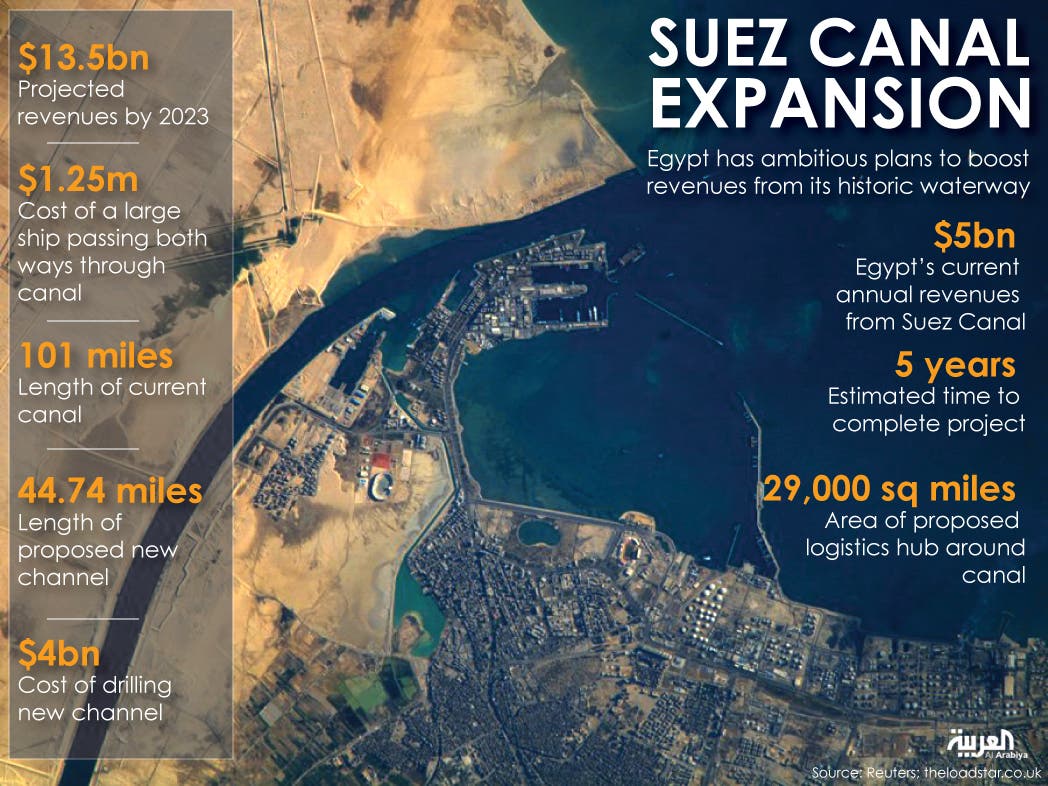 Criticism of the project is seen as unpatriotic, with some local newspapers calling it “the project of the century” and comparing it to Egypt’s surprise attack on Israel in 1973 – one of the proudest moments in modern Egyptian history.
But it has come under fire from thousands of locals whose homes have been destroyed by the construction work.

Senior representatives for the Suez Canal Authority did not respond to two written requests for comment or answer their phones.