From The Guardian by Jessica Aldred

Bottles, plastic bags, fishing nets and other human litter have been found in Europe's deepest ocean depths, according one of the largest scientific surveys of the seafloor to date.

Scientists used video and trawl surveys to take nearly 600 samples from 32 sites in the Atlantic and Arctic oceans and the Mediterranean Sea, from depths of 35 metres to 4.5 kilometres.
They found rubbish in every Mediterranean site surveyed, and all the way from the continental shelf of Europe to the mid-Atlantic ridge, around 2,000km from land. 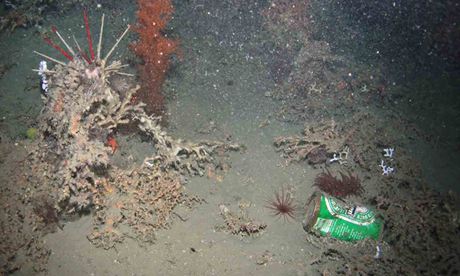 A Heineken beer can found by a remote-operated vehicle in the upper Whittard canyon at 950m water depth.
Photograph: Hermione Project/Plymouth University

Plastic was the most common type of litter found on the seafloor, accounting for 41%, while rubbish associated with fishing activities (discarded net and fishing lines) made up 34%.
Glass, metal, wood, paper and cardboard, clothing, pottery and unidentified materials were also documented.

Jonathan Copley, senior lecturer in marine ecology at the University of Southampton, who did not take part in the study, said: "This very important research confirms what most of us who work in the deep ocean have noticed for quite some time – that human rubbish has got there before us.
"But this paper presents an analysis of the kinds of rubbish, what is common where, and what sort of activities are having the most impact in terms of rubbish reaching the deep ocean in different regions. People are piecing this together on a global scale to appreciate how widespread this problem is potentially."

As more of Europe's deep seafloor is being explored, litter is being revealed as far more widespread than previously thought. While individual studies have used trawling to quantify the amount of litter in particular areas or remotely operated vehicles to study the types of waste, this paper is the first to analyse the patterns of distribution and abundance of litter across different underwater geographical settings and depths. 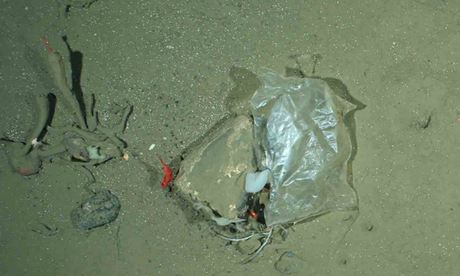 The most dense accumulations of litter were found in deep underwater canyons, and the lowest density on continental shelves and ocean ridges, according to the international study involving 15 European organisations.

Dr Kerry Howell, associate professor at Plymouth University's Marine Institute, who took part in the study, said: "This survey has shown that human litter is present in all marine habitats, from beaches to the most remote and deepest parts of the oceans. Most of the deep sea remains unexplored by humans and these are our first visits to many of these sites, but we were shocked to find that our rubbish has got there before us."

Litter disposal and accumulation in the marine environment is one of the fastest growing threats the health of the world's oceans, with an estimated 6.4m tonnes of litter entering the oceans each year.
Plastics are by far the most abundant material, introducing toxic chemicals that can be lethal to marine fauna and break down into "microplastics" that have become the most abundant form of solid-waste pollution on Earth.
Plastic pollution has also been found to be changing microbial processes in the ocean.

Besides the visible impact of marine pollution, litter can be mistaken as food and ingested by a wide variety of marine organisms.
Entanglement in derelict fishing gear – known as "ghost fishing" – is a serious threat to mammals, turtles, birds and corals.
Floating litter also facilitates the transfer of alien species to new habitats. 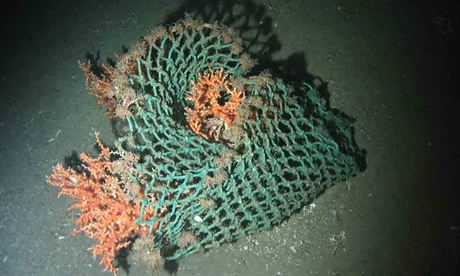 Cargo net entangled in a cold-water coral colony at 950m in Darwin Mound.

Scientists said one interesting discovery made in the study related to seafloor deposits of clinker – the residue of burnt coal dumped by steam ships from the late 18th century onwards.

Marine biologist Dr Eva Ramirez-Llodra said: "We have known that clinker occurs on the deep-sea bed for some time, but what we found was the accumulation of clinker is closely related with modern shipping routes, indicating that the main shipping corridors have not been altered in the last two centuries." The report also showed the path that materials such as plastics can take, originating from coastal and land sources and being carried along continental shelves and slopes into deep water.
Dr Veerle Huvenne, seafloor and habitat mapping team leader at the National Oceanography Centre, Southampton, said: "Submarine canyons form the main connection between shallow coastal waters and the deep sea. Canyons that are located close to major coastal towns and cities, such as the Lisbon canyon offshore Portugal, or the Blanes canyon offshore Barcelona, can funnel litter straight to water depths of 4,500m or more."

The paper, Marine litter distribution and density in European Seas, from the shelves to deep basins, was published in the journal PLOS ONE.
The study was led by the University of the Azores, and is a collaboration between the Mapping the Deep Project led by Plymouth University and the Hermione Project, coordinated by the National Oceanography Centre, Southampton.