Paul Heiney: my journey to Cape Horn for the sailor son I loved and lost

Father and son: 'In my head I could hear him telling me I had “done OK, Dad”.'

From The Telegraph by Paul Heiney

Family tragedy inspired an adventure to face one of the world’s most perilous nautical challenge.


The moment I set eyes on the Beagle Channel, I knew that 9,000 miles of ocean sailing to the southernmost part of South America had been worth it.
A moonlit night gave way to a misty dawn, a steady wind filled the sails and drew us onwards.
The rise and fall of the ocean swell felt more a comfort than a threat, yet it was never far from my mind that this can be a dangerous place.
This is where the weather quickly loses its temper and in fury hurls winds at you way beyond gale force.
Storms here have destroyed big ships.
It is only 50 miles north of the infamous Cape Horn.
But this morning it offered me an overwhelming reward for my efforts.
The blazing equatorial heat of months before seemed far behind as snow-clad mountains dipped to meet cold, green water and glaciers slithered their way to the sea.
There were no signs of life, and even the faithful, following albatrosses had deserted us.
I faced westwards and saw the splendour of this fabled natural highway linking the great oceans of the Pacific and Atlantic.
It took my breath away. To the Horn ?
from www.sailblogs.com/member/wildsong/

Cape Horn was not far now.
In the past few years, I have been on two great voyages.
The first, this one to Cape Horn, was now becoming a dream finally realised; the other, coming to terms with the death of my son, Nicholas, at the age of just 23, and by his own hand, was something I would have given anything to avoid.
The two are not unconnected. 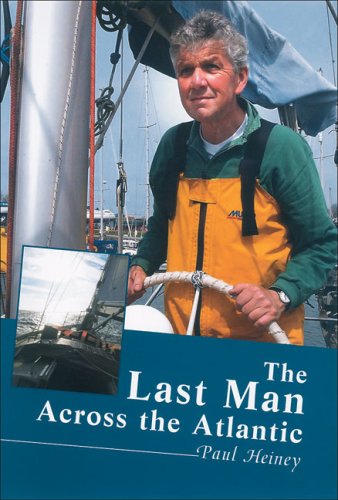 "The Last Man Across the Atlantic" book


I was at sea in 2006, off the coast of Nova Scotia after a single-handed passage across the North Atlantic, when, in a bleak spot, I took the bleakest possible call by satellite phone.
I was home within 24 hours.
Although my wife, daughter and I were awash in grief, I soon found a force more powerful took control.
There was a sense of deep peace and understanding, and no desire to play the pointless game of “what if…?”
No guilt, no blame.
Such things seemed disrespectful to Nicholas.
He had made his choice.
His startling mind, honed by the great love of poetry that took him through Oxford, had started to crumble, and an avalanche of profound mental illness was about to overtake him.
He knew that, he sensed it coming at him like a rogue wave and chose to step aside.
We could not blame him.
The coroner declared: “He took his life while the balance of his mind was disturbed.”
There is nothing more to say.

As a family, we refused to be crushed.
I determined that some good must emerge from the loss.
Small things can become great comforts: we discovered – scribbled in secret and only pieced together after his death – a rich legacy of poems and reflections that were later published under the title, The Silence at the Song’s End, a book that has given comfort to many who contact us, inspired music, a short film, and a radio play.
Much of those writings were reflections on being at sea gathered while on tall ships in the Atlantic and Pacific oceans, both of which he had crossed by the age of 21.
He was a proper sailor.

Over the passing years, after I had read and reread it, I decided it was time to make a grand voyage of my own.
It had to be a dramatic one and a testing one, too.
And what presents more of a challenge than Cape Horn?
I could have chosen any of the great adventurers whose books I had devoured and taken them as role models, but instead I chose Nicholas.
The way he conducted himself at sea was something to which I now aspired.
It is not unusual for sons to be inspired by their fathers, but in this case it would be exactly the reverse.

Our boat would not look out of place on the Solent on a sunny, Sunday afternoon but I judged it up to the job.
Whether I was fit for the task remained to be seen.
For the intricate coastal passages, I would try and persuade a crew to sail with me, but on the open ocean I would sail alone.
I was eventually to achieve 11,000 solo miles over the course of two years, with brief periods back home.
Of course, I was never truly alone.
Nicholas lurked, always in the shadows but ready to share a joke, to warn, often to inspire.
That it was only in my mind seemed not to matter.

Heading south is not difficult: the north-east trade winds are your best friends, until just north of the equator when they evaporate and leave you wallowing, idle as that painted ship upon a painted ocean. Calms are every bit as testing as storms.
The boat rattles with no wind to fill the sails, there is no progress, and the cabin temperature rises as your temper shortens.
For days I watched heavy squalls scuttling by but leaving me in peace. I didn’t want peace; I wanted out of this.

Calm weather brings other dangers.
It is easy to relax your guard and walk the side deck without clipping on your safety line.
All it takes is a badly timed swing of the boom and you are over the side, and if there is any breeze at all the boat will be moving away faster than I could swim.

In the tropics, food goes rotten fast.
I would throw stuff into the pressure cooker, enough for two days, but it never lasted past the first.
Even in the comparative cool of the night, a stew packed with luscious vegetables turned to putrid mush in hours.
When the calms finally release you, and a fair wind blows, it feels like a true escape. I marvelled at the intensity of tropical night skies.
I would switch off all the lights, even the dim glow of the electronics, till my eyes adjusted to the heavens, and sit for hours in wonder.
Sometimes, at dusk, when the horizon was still visible, I would take out my sextant and take measurements and plot my position.
Some say the sight of such vastness makes them feel insignificant, but I felt the reverse.
When you are navigating by the stars, the universe is working for you.
You feel at the very centre of it.

Landfall soon breaks the magic.
Salvador, in Brazil, is a violent city and my joining crew and I spent hours walking the dimly lit and threatening docksides expecting every footfall to be our last.
Life on land is far harder than life at sea, and many times I had to invoke the memory of Nicholas, and remember how bravely he faced the places he voyaged to – Mexico, Korea and Japan – often alone and still in his teens.
With his help, I escaped Salvador unscathed.
But not in Rio, where we were neatly mugged by a gang who pulled knives and shouted, “Money!”. Twenty quid and a small camera bought our escape.
We told the police.
They laughed.
“We get mugged, too!” they said.

But this voyage was about being at sea, not on land, and I was soon ready to leave the tropics for colder and stormier waters.
In the Roaring Forties, the winds blow with malice.
Often we would heave-to while the worst blew through by stopping the boat dead in the water and just sitting there, nervously bobbing up and down like a plastic duck.

It grew colder and diesel was now in short supply and the cabin heater was rationed.
We shivered a lot.
The fresh food was finished and in the cold air I could not get the dough to rise in order to bake fresh bread.
They were dank, grey days.

Off the south-eastern tip of South America is Staten Island.
It has seen many deaths.
Beset by fast tides, violent winds and poor shelter, the old square-riggers gave it a wide berth. I chose, cautiously, to sail into the heart of it, however, to an anchorage like no other.
Sailing through the narrowest of gaps between snow-topped mountains, surrounded by a dozen tumbling waterfalls, you find peace.
It was like entering Narnia.
The middle verse of one of Nicholas’s poems flooded my mind. 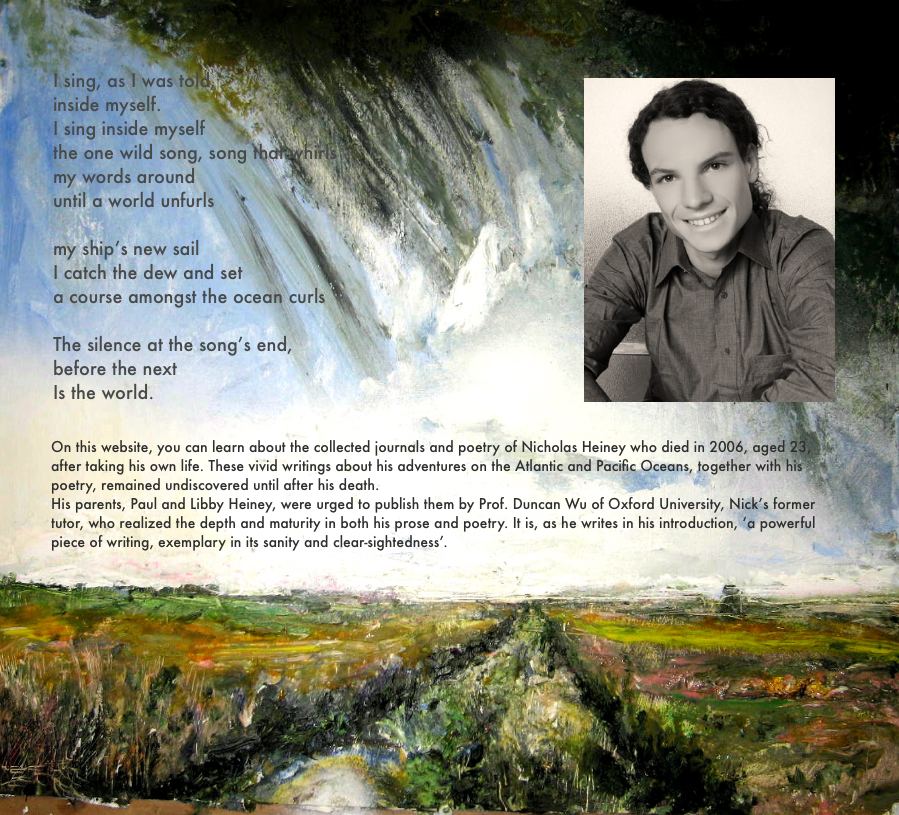 The silence at the Song's End by Nicholas Heiney

Some kind of song inside myself rose at the sight of the beauty of this lonely anchorage.
If I saw nothing else, this would be reward enough.

But the beguiling Beagle Channel was soon to follow, and then a dash in carefully chosen weather to Cape Horn itself: navigating in the dark, fearing every gust of wind that might hint at a pouncing storm.
Cape Horn has a majesty, too, and others have chosen to pop the champagne at the sight of it.
Not me.
It seemed more like a battlefield where thousands lost their lives: a memorial, not a tourist attraction.
I gave it due respect and sailed on.
Rounding Cape Horn, strangely, no longer seemed the most important part of this journey.

It was now 9,000 miles back to Devon.
My last crew departed in Uruguay and I faced the remaining 7,000 miles alone.
It was not easy.
The winds failed to follow their predicted behaviour.
The boat was becoming tired and so was I.
North of the equator I met strong headwinds that tormented me for the remaining 3,000 miles.
It was the toughest slog of the whole trip.

Tired, mentally and physically, I made for the Azores, where I could take a break.
But the weather only worsened and I found myself in a poor position with gales blowing, no diesel so no engine, water low, batteries almost flat and, eventually, a mainsail that was ripped in half by a violent gust of wind.
After a monumental effort from which it took my arms months to recover, I sailed into sufficient shelter to make my first contact with land for 66 days, and was towed from there to safety by the helpful harbour staff on the island of Flores. 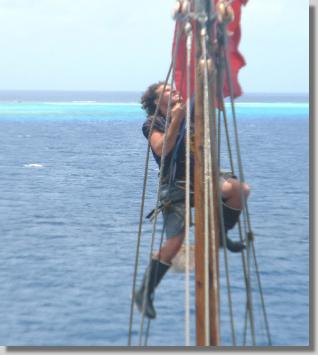 In his last six years Nicholas Heiney sailed widely, crossing both the Atlantic and the Pacific as a deckhand aboard the square-rigged barque Europa, and training young Koreans in seamanship.

Had I lived up to the example my dear boy had set?
I hope so.
In my head I could hear him telling me I had “done OK, Dad”.
That will have to do.
But how I wished he could have said it face to face.
And now I am gathering my thoughts on paper, as he did, hoping they might come close to the intensity of his.
If they should ever find a publisher, you will read how I have become certain that none of us voyage alone.
We are guided by those we have loved whether they are with us in body or not.
I know he wasn’t there, wasn’t in the cabin, wasn’t at the wheel.
But that is not to say that he was nowhere.
He is out there somewhere, amongst his ocean curls.
And for a brief while I was able to be with him.