China unfettered: Redefining the rules of the seas

From Forbes by Lee Kuan Yew

A rising China is seeking to assert its sea-boundary claims.
It is naive to believe that a strong China will accept the conventional definition of what parts of the sea around it are under its jurisdiction.
This should come as no surprise, but it has been uncomfortable for some of China’s neighbors and other stakeholders, including the U.S.

China, Brunei, Malaysia, the Philippines and Vietnam are engaged in long-standing territorial and maritime disputes in the South China Sea.
The Philippines, under the UN Convention on the Law of the Sea (UNCLOS), has initiated international arbitration.
The arbitral tribunal is proceeding, even though China has decided not to participate in the hearings.

If a negotiated agreement can’t be reached, the ideal solution would be to resolve the dispute based on international law and legal principles, including UNCLOS, that have been established in many other such cases.
Can this be done through a juridical platform, such as the International Court of Justice (ICJ)?
Keep in mind that major powers, including China and the U.S., don’t generally submit to the jurisdiction of the ICJ or other such forums.
A resurgent China isn’t going to allow its sea boundaries to once again be decided by external parties.
Therefore, I don’t believe the Chinese will submit their claims, which are based primarily on China’s historical presence in these waters, to be decided by rules that were defined at a time when China was weak.
And China has judged that the U.S. won’t risk its present good relations with China over a dispute between the Philippines and China.

Why this sudden interest in some outcroppings in the South China Sea?
What gas or oil can be drilled or fish caught around these rocks?
Much more is at stake than rocks and resources.
China sees the South China Sea as one of its key interests.
A rising China is asserting its position by claiming historical rights to these waters.
And the disputes, which arise from claims based on different principles, are unlikely to be resolved.

One-third of the world’s trade passes through the South China Sea, a vital sea line of communications.
Many other countries also have important interests there.
These include the freedom of navigation and overflight, as well as the peaceful management of disputes.
Quite apart from preventing mishaps and incidents, a framework to manage the different interests should be established.

Looking to the Past

China’s reliance on historical claims necessitates considering what its fleets did in the past, way before Christopher Columbus landed in the Americas and Vasco da Gama arrived in India.
More than six centuries ago Emperor Zhu Di of the Ming Dynasty sent out a large fleet of trading ships to explore and trade with the rest of the world.
His choice to command the expedition was Grand Eunuch Zheng He (1371–1433).
Zheng He was born and raised a Muslim in what is now Kunming City in Yunnan Province.
He was captured by Ming Dynasty forces around 1381 and taken to Nanjing, where he was castrated and subsequently sent to serve in the palace of Zhu Di, who was then the Prince of Yan and would later become Yongle Emperor.

The Ming Empire without its "vassal states" under the Yongle Emperor
History and Commercial Atlas of China, Harvard University Press 1905

Over the course of nearly three decades (1405–33) Zheng He led seven westward expeditions, which were unprecedented in size and range.
They spanned the South China Sea, the Indian Ocean and the Persian Gulf, and reached as far as the east coast of Africa.
The ships used for these expeditions–more than 400 feet in length, based on archaeological evidence–were many times the size of those Columbus used to sail across the Atlantic. 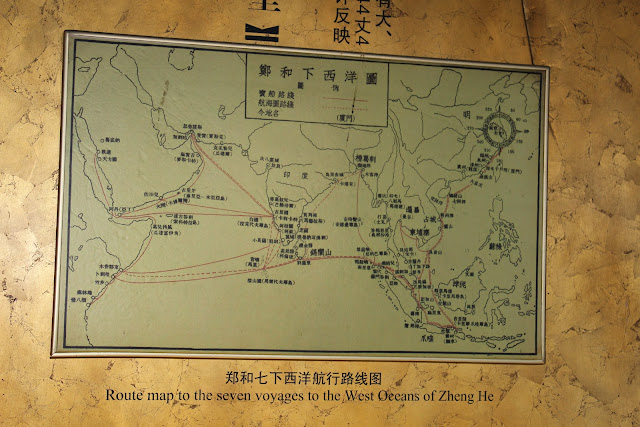 Map of the routes of Zheng He

These expeditions amply demonstrated the power and wealth of the Ming Dynasty.
More important, they left a lasting impact on the countries visited: Numerous masjids (mosques) in the region are named after Zheng He, commemorating his contributions to the local communities.

If historical claims can define jurisdiction over waters and oceans, the Chinese can point to the fact that 600 years ago they sailed these waters unchallenged.