Benjamin Leigh Smith: The forgotten explorer of the frozen north 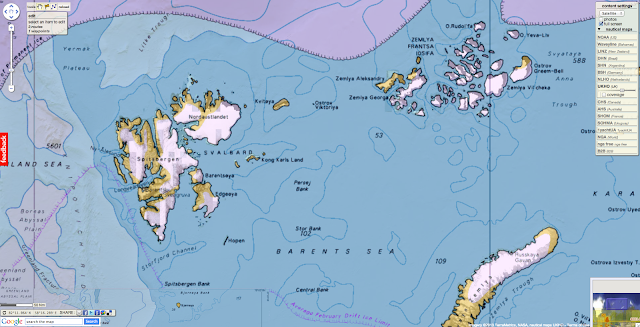 >>> geolocalization with the Marine GeoGarage <<<
Among the geographical features named for him are a kapp (cape) and breen (glacier) in Svalbard, a sound in Franz Josef Land, as well as Ostrov Li-Smita (Leigh-Smith Island), lying east of Hooker Island in the Franz Josef Land.


He was one of the most intrepid explorers of the 19th Century, leading five expeditions to the Arctic and surviving for 10 months after his ship was crushed between two ice floes.
But 100 years after his death, Benjamin Leigh Smith is now largely forgotten.

Somewhere in the Arctic Ocean, about halfway between mainland Norway and the North Pole, there's an archipelago where Benjamin Leigh Smith's name marks its easternmost point.
The likes of Captain Robert Falcon Scott, Sir Ernest Shackleton and Sir Henry Morton Stanley were superstar explorers, men who earned great renown and who had sought great renown.
On the other hand, Leigh Smith was a modest man.
The cape and adjacent glacier bearing his name (Kapp Leigh Smith and Leighbreen) are some of the few lasting tokens of his historic expeditions.
Unlike so many of his contemporaries, even unlike today's explorers, he never sought fame for discovering new places.
He didn't publish any detailed account of his explorations and he shunned public appearances, often sending someone else in his place.

Born in 1828, the Briton was one of the first explorers to take ships to the high Arctic, where extensive sea ice - the thin frozen surface of the ocean, a few metres in thickness - made conditions very hostile. 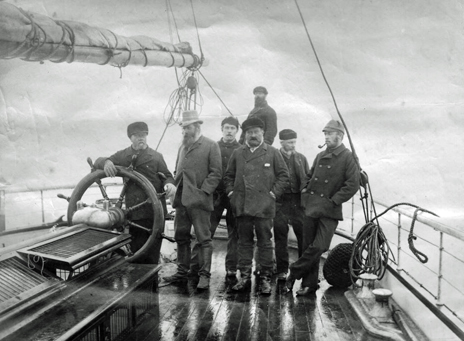 The crew of the Eira (Benjamin Leigh Smith, second left)

"He saw and mapped areas and islands that were being observed for the first time," says Prof Julian Dowdeswell, director of the Scott Polar Research Institute in Cambridge University.
"The high Arctic had much more sea ice a century ago than it does now, which made navigating through it difficult.
"He received the Patron Gold Medal - one of the two highest awards the Royal Geographical Society gives - for his achievements, so was hugely eminent," he says.
As well as his advances in scientific exploration, Leigh Smith was at the centre of a survival feat that is arguably a match for the later exploits of the much more famous Shackleton.


In 1881, Leigh Smith's purpose-built research vessel Eira was crushed between two ice floes and sank off another Arctic archipelago, Russian Franz Josef Land, north of Siberia.
The crew survived for 10 months in makeshift huts, living off provisions salvaged from the ship and hunting walrus and polar bear.
Leigh Smith then led a voyage of escape in boats with sails made from table cloths, before they were ultimately rescued.
Every single man survived.
"This remarkable Arctic journey was executed with as much grace as that of Shackleton 40 years later," says Peter Capelotti, author of Shipwreck at Cape Flora: The Expeditions of Benjamin Leigh Smith, England's Forgotten Arctic Explorer.
"His leadership was so successful that the veteran Arctic whaling captain David Gray was moved to call him the very model of 'quiet, cool, thoroughbred English pluck'," he says.
When it came to accepting medals for his achievements, however, Capelotti says Leigh Smith "always begged off".
"Explorers as a rule are self-obsessed people who love to talk about themselves, but not this one. He once told his brother-in-law that if Queen Victoria herself asked to see his Arctic photographs, he would send his expedition photographer around to the palace with them." 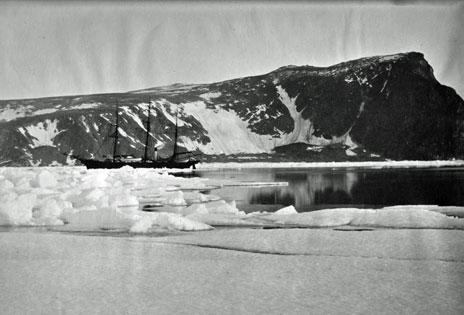 The Eira in Franz Josef Land

Capelotti puts part of Leigh Smith's low profile down to his family background.
While he came from a wealthy family, his father, who was an MP, never married his mother, an unusual and potentially scandalous situation.
And although he studied law at Jesus College, Cambridge, he couldn't get a degree immediately because it was difficult for anyone but practising members of the Church of England to gain degrees at the time.

"He was always at odds with upper society," says Capelotti. "He didn't fit in."
Leigh Smith's great-great-great niece Charlotte Moore, who lives in Sussex, agrees.
"He was both establishment but also separate because he was illegitimate and from a dissenting family, so he never received a knighthood or got that kind of honour, which is probably a factor in why his story is not better known," she says.

In fact, it was only after Leigh Smith's father died, and another man left him money, that he embarked on his first expedition to the Arctic, according to Moore.
"The first one was a sporting cruise really. All polar expeditions were from the Royal Navy, but Ben wanted to do a private non-naval expedition, so he hired a ship.
"Then he realised he was interested in the scientific side of Arctic exploration and brought back specimens for the British Museum and Kew. He even brought back live polar bears for London Zoo," she says.

By his fourth expedition, Leigh Smith's enthusiasm for Arctic exploration was so advanced that he had his own vessel - Eira - specially built.
He also named a lot of the places he mapped after friends and family.

"Mabel Island is named after a niece, Amabel. And the hut the 25 shipwrecked crew made out of driftwood, rocks and masts of ships on his last expedition was named Flora Cottage after his cousin Florence Nightingale," says Moore.
With the famous nursing pioneer for a first cousin and a father active in the campaign against the slave trade, Leigh Smith came from an outspoken family.
He was also overshadowed by his sister Barbara, a leading feminist and activist for women's rights, which may be part of the reason why he didn't like to talk about his accomplishments, according to Capelotti.

But Moore says although Leigh Smith was a private man of few words when it came to his expeditions, with his log books a "bare record - simple, factual and unemotional", he was seen as a forceful character in the family home.
"In my family he's seen as both a hero and a villain. His Arctic stuff is heroic, but he tried to prevent the marriage of one of his nieces and laid down rules over that.
"They did marry after they were 21, but the same forceful character that led people to safety at sea could apparently be uncomfortable within the family and the feud with Ben went on for many years. At the same time, people were in awe of him."