Loran coast stations
Loran-C systems are in place in some 16 countries worldwide, including Europe, Russia, the Far East and North America, although the transmitters in the US have been switched off, pending a decision on upgrading to eLoran.
At the instigation of the UK and other member administrations, the International Maritime Organisation is developing e-Navigation as the future approach to marine navigation.
There is a strong opinion that this development cannot be realised without a resilient positioning system in place and that this means a terrestrial backup to GNSS – eLoran is the only possible candidate within the timescales envisaged for the project.

Ships traversing the busy Dover Strait now have more help to work out where they are and avoid other vessels.

UK switches on GPS backup in the English Channel
The Channel is used by between 400 and 500 vessels a day,
including ferries, oil tankers and cargo ships

A technology called eLoran has been turned on to help navigation if Sat-nav based systems (aka GPS) fail or are jammed.

The General Lighthouse Authority (GLA) has turned on a radio station which broadcasts fine-tuned eLoran signals.

Ships fitted with eLoran receivers will now be able to use the backup radio signal to reach port. The eLoran technology is based around longwave radio signals that are broadcast from nine separate stations in Northwest England, France, Germany, and the Faroe Islands.

Now added to this is a GLA station in Dover that broadcasts corrections to eLoran that makes signals so precise ships can enter harbours using them in the event of GPS failure. 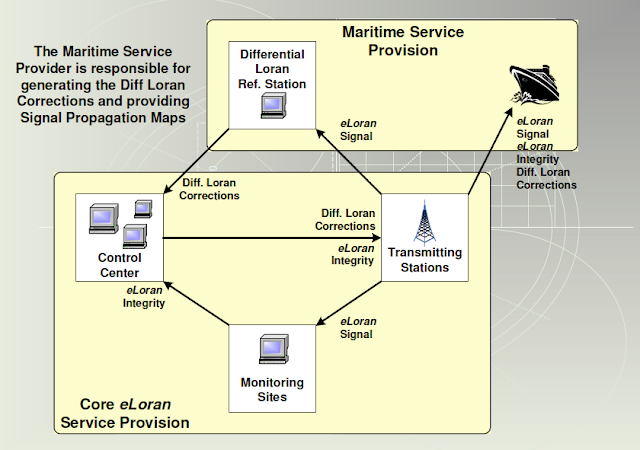 Example of an eLoran service provision for maritime users

In a statement shipping minister Stephen Hammond said the technology should improve navigational safety in "the busiest shipping channel in the world".

Maritime navigational instruments tend to rely on GPS positioning which employs timing signals broadcast by a constellation of satellites. However, GPS signals can fail or be fooled by a conflicting radio signal, said Professor David Last, an advisor to the to General Lighthouse Authority.
"The problem is, many vessels are wholly dependent on GPS, " Prof Last told the BBC.
"GPS can and does go wrong."

GPS signals are weak, and so can be disrupted by solar storms, or by a stronger signal broadcast in the vicinity by a GPS jammer.
Compact GPS jammers that run from a car are available to buy, although use is prohibited.

GPS is used to determine a ship's position and direction, and for communications.
All ship's instrumentation is integrated, so if anything goes wrong, the systems can completely fail.

GPS can be disrupted by a weak signal broadcast on the same frequency, said Prof Last.
The weak signal can cause a ship's instruments to gradually drift out of true, without setting off any alarms, leaving the ship in a different position to where it "thinks" it is.
"The ship will drift away from its true position, and slowly start to turn," said Prof Last. "It's insidious."

An eLoran receiver has been installed on a P&O Ferries ship,
but the GPS alternative is not widely use
“Accurate real-time positional information is essential for the safe navigation of ships with modern electronic charts,” said Captain Simon Richardson, Head of Safety Management at P&O Ferries says


eLoran is not widely used on commercial shipping, although an eLoran receiver has been installed on a new P&O Ferries ship, called the "Spirit of Britain".