Eat more anchovies, herring and sardines to save the ocean's fish stocks

We should consume less of the fish at the top of the food chain and more of their prey to rebalance the marine ecosystem, says fisheries scientist

Cut back on tuna and salmon and load your plate instead with herring and sardines if you want to help save the world's fish.
So says the scientist who led the most comprehensive analysis ever carried out of fish stocks in the world's oceans and how they have changed over the past century.

The study by Villy Christensen of the University of British Columbia's Fisheries Centre confirmed some previous indications that populations of predator fish at the top of the food chain, such as cod, tuna and groupers, have suffered huge declines, shrinking by around two-thirds in the past 100 years.
More than half that decline occurred in the past 40 years.

Christensen found that the total stock of "forage fish", such as sardines, anchovy and capelin, has more than doubled over the past century.
These are fish that are normally eaten by the top predators.
"You remove the predator, you get more prey fish," said Christensen.
"That has not been demonstrated before because people don't measure the number, they don't go out and count them."

His call for consumers to shift their attention down the marine food chain from predators like tuna and cod to more unusual fish echoes that by celebrity chef Jamie Oliver, who suggests we should eat more coley, mackerel, dab, pouting, herring and sardines.

"I know you like your fish suppers, but our appetite for the same fish, day in, day out, is sucking the seas dry," Oliver has said.
"I wouldn't bother waiting for the politicians to sort this one out, guys, you can really help from the comfort of your own kitchen ... Lay off the cod, haddock and tuna, diversify and cook up a wider range of fish."

Christensen presented his findings on Friday at the annual meeting of the American Association for the Advancement of Science (AAAS) in Washington, DC. 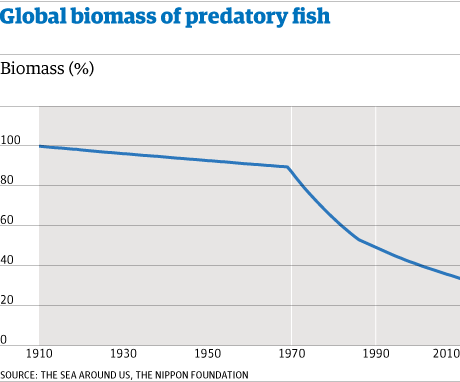 Predatory fish stocks have declined by around two-thirds in the past 100 years
"Overfishing has absolutely had a 'when cats are away, the mice will play' effect on our oceans," said Christensen.
"By removing the large, predatory species from the ocean, small forage fish have been left to thrive."

Christensen urged consumers to eat more of the burgeoning population of forager fish such as sardines and anchovies, while reducing their intake of top predators, in order to re-balance the world's fish species.

Today, the vast majority of forage fish that are being caught are used inefficiently in fish farms to feed salmon, for example.
"Currently, forage fish are turned into fishmeal and fish oil and used as feeds for the aquaculture industry, which is in turn becoming increasingly reliant on this feed source," said Christensen.

The rise in wild forage fish populations has knock-on effects on marine ecosystems.
These fish eat more of the zooplankton in the oceans, which means that the next stage down the food chain – the plant plankton normally consumed by the zooplankton – blooms.
"You get into a situation where you get a green soup, you get anaerobic conditions [low oxygen levels]. There are clear examples in the Black Sea," said Christensen.

In their analysis, Christensen's team collated data from more than 200 models of marine ecosystems around the world, using a technique called Ecopath, to estimate the mass of various fish in the world's oceans and how it has changed from 1880 to 2007.

Predators in general are an important component in food chains, said Christensen, preventing the spread of disease, for example.
"In England some years ago, there was a crisis where they had killed a lot of the predators such as eagles. You had rabbits that got problems with diseases, there was massive die-off, the sick ones were not being eaten by the predators. We see less stable ecosystems if we do not have predators there."

Marlins fishing sardines in Mexique (B. Reinhard Dirscher)
The precipitous drop in top predator fish was also linked, in a separate study presented at the AAAS, to the rise in global fishing capacity.
This has increased by 54% from 1950 to 2010 with no sign of a decrease in recent years.

"We need to cut back fishing efforts," said Christensen.
"Society needs to decide what we want with the ocean – do we want to turn it into a farm? Or do we want to have something that is more of a natural ecosystem?"