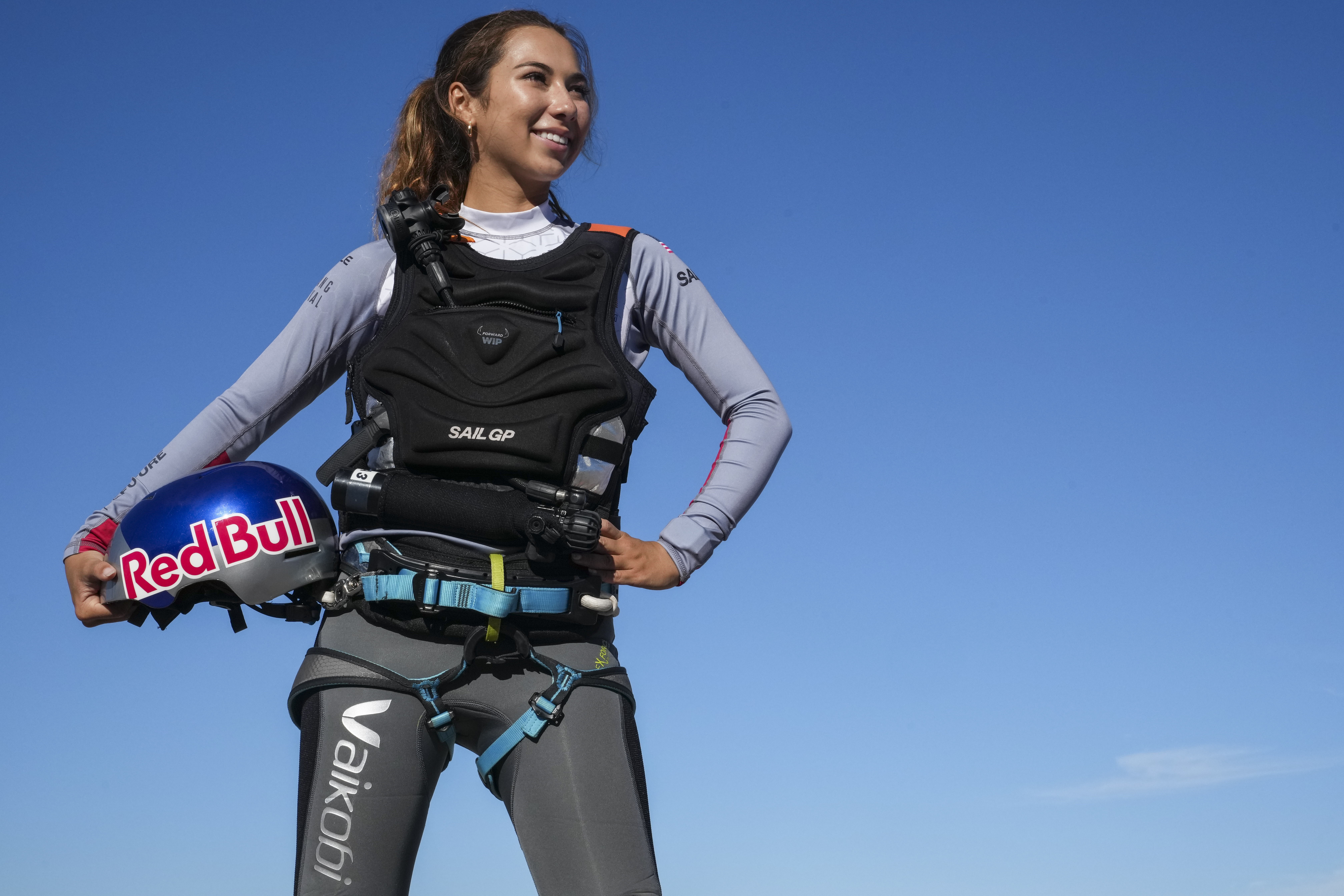 “I’ll always continue to love this sport and really be determined to race my best,” CJ Perez said.
“I just want to see more people like myself get into it.” (Bob Martin for SailGP)
From WP by Des Bieler


The speed that hydrofoils add to boats transformed the world of competitive sailing, but it has nothing on the dizzying rate of CJ Perez’s ascent in the sport.

After starting to sail at 13, the Honolulu native turned 18 just in time to take her place aboard a state-of-the-art catamaran in October and compete in the world’s top sailing league.

Perez’s participation with the U.S. team at an event in Cadiz, Spain, made her the first American woman and the youngest person ever to race in SailGP.
Just as significant for someone keen to help bring more diversity to top-level sailing, Perez is the nascent circuit’s first Latina athlete. Her rise is intertwined with “foiling,” a technological revolution in sailing that could lure a new field of participants at a time when the sport is taking steps to become more inclusive.
CJ Perez became the first American woman, first Latina and the youngest person ever to race in SailGP, the world's top sailing league.
(The Washington Post)
“I’ve been given so much,” Perez said, “and I feel it is a part of my responsibility to also give back and try to break down these barriers that have historically excluded many people in the sailing community.”

18-year-old CJ Perez on racing aboard an F50 catamaran, importance of women competing
CJ Perez became the first American woman, first Latina and the youngest person ever to race in SailGP, the world's top sailing league. (The Washington Post)

Foiling refers to the use of watercraft with hydrofoils, winglike appendages that protrude from the bottoms of boats and boards.
Perez’s proficiency at foiling landed her a coveted spot with the U.S. team after an open call for applicants for SailGP’s Women’s Pathway Program, an initiative aimed at increasing gender diversity on all of its teams, elicited interest from highly accomplished and experienced women across a range of aquatic disciplines.
All teams in SailGP, which represents eight nations, use one-design F50 catamarans that boast a predicted top speed of over 60 mph and have approached that mark in races.
As the boats pick up speed, their foils push the twin hulls entirely out of the water, vastly reducing drag and hurtling them past the 50-knot (57.5-mph) barrier.

“They are incredible and flat-out dangerous,” Nevin Sayre, who runs U.S. Sailing’s youth-oriented O’pen Skiff Class, said of the F50s.
“For the average sailor to get in a boat like that, they’re scared out of their mind because you’re going from a bicycle to a Porsche.”

Perez, however, is far from an average sailor. She began her career in 2016 on an O’pen Skiff (then called an O’pen Bic) and got so good so quickly that by March 2017 she finished fourth at the North American championships.
The next year, she became the first female competitor to win the title outright.
She followed that by finishing as the top female competitor and placing sixth in the under-17 group at the 2019 O’pen Bic world championships in Auckland, New Zealand.

Perez then moved on to a 29er, another high-performance craft aimed at younger sailors, before starting to hone her foiling skills in 2020 on a WASZP, another one-person boat.
The coronavirus pandemic erased any traveling she might have done that year to competitions, but it also gave Perez the relatively little time she needed to attain such mastery of the craft that when she showed up in early October at the 2021 WASZP national championships in Toms River, N.J., she defeated an all-ages field.

By then, Perez already had been selected for the SailGP team, and within days she was off to Cadiz for an F50 adventure that was, as she put it, “just the coolest thing ever.”

CJ Perez sits behind Jimmy Spithill, CEO and helmsman of the U.S. SailGP team, during a practice session for an event in Spain. (Ricardo Pinto for SailGP)

U.S. SailGP skipper Jimmy Spithill said that when he and other team officials first saw video of Perez foiling away in her WASZP, they were “not sure if she had done any racing at all or had been sort of sailing around on her own and learning it, [but] you could see that she had a lot of natural talent.”

“We just saw a huge amount of potential,” added Spithill, who led Oracle Team USA to America’s Cup victories in 2010 and 2013.

A native of Australia who resides in San Diego, Spithill has long been a prominent advocate for foiling, which dates back approximately a century in its earliest forms but didn’t make a major splash in competitive sailing until 2001, when a hydrofoil-equipped Moth boat won a world championship event in Australia.
The technological innovation hit the big time — and proved there was no going back — when the 2013 America’s Cup featured foiling catamarans that enthralled the world with a duel in which Spithill and Team USA rallied from an 8-1 deficit to stun a New Zealand-based challenger in San Francisco.

The Ocean Race, sailing’s other traditional heavyweight crewed event, has since incorporated foiling, as have the Olympics.

“That’s the future,” Spithill said. “That’s what people want to do.”

His team’s emphasis on foiling skills over traditional sailing experience was underlined by the selection of 20-year-old Daniela Moroz, the five-time reigning women’s kitefoil world champion, who accompanied Perez in joining the SailGP squad in April after they were initially recruited as part of the Women’s Pathway Program.

“Daniela and CJ both bring to our team an impressive amount of foiling ability, which is paramount to racing at this level,” Spithill said then.

Moroz began learning how to sail a WASZP and develop some techniques that can translate to the F50, while Perez initially remained in Hawaii because of her youth.
The relatively affordable WASZP boat only started to become available around the time Perez started sailing, and it was not lost on Sayre that she was able to cut her teeth in the sport just as foiling in various forms was more accessible than ever before.
It also helped, he noted, that the now 15-year-old O’pen Skiff is a faster vessel than most of its predecessors, and thus Perez had less of an adjustment to make to foiling speeds.

“Kids four to five years older than her, none of them are going foiling at such an early age,” he said. “She’s at the cutting edge of a new generation, who are learning on both the O’pen Skiff and going right into foiling.”

Describing older sailboat models as “bathtubs with sails,” Sayre said they did not provide as appealing an entry into the sport.

“It’s like learning with a typewriter when these kids are used to iPhones,” he said.
“So she learned with an iPhone and just took off from there.”

Perez and Moroz also benefited from the Women’s Pathway Program, which Perez said was “really hopeful for the future of women in sailing.” Hannah Mills, a two-time Olympic gold medalist and three-time world champion who joined Britain’s SailGP team under the program, echoed Perez in hailing it as “a huge positive.”

“There is no hiding that right at the top of high-performance professional sailing it has been a male-dominated sport, but so have most sports,” Mills said via email.
“It’s great to see there is a now real step change across the industry to be more inclusive and supportive.”

Among the many unlikely aspects of Perez’s status in sailing is that before she took it up, she didn’t surf or engage in any of the aquatic sports readily available to Hawaiians.
While she was a regular beachgoer, her athletic interests tended toward land-based sports such as volleyball, tennis and track.
But her proximity to water gave her opportunities to spot from afar an activity that struck her as compelling.

“So I begged my parents to sign me up for spring break sailing camp,” Perez said, “and my passion for the sport really grew from there.”
Once she got into a skiff, Perez “fell in love with the ocean and all it has to offer,” and she has since taken up surfing and windsurfing, both with and without foils.
She also plans to be with the U.S. team, whether in the boat or helping in race preparations, when SailGP ends its second season with a final event in San Francisco in March.
Before that, the circuit made its penultimate stop this past weekend in Australia, where the U.S. squad tried out another woman, Anna Weis, who competed on a smaller foiled catamaran at the Tokyo Olympics.

“These boats,” Spithill said of the F50s, “they’re aggressive, they’re fast and there’s risk there, so you need to have a roster with some depth.”

All that speed and danger, particularly as handled by eight boats stocked with top talent and packed into a tight course, are major selling points for SailGP, which announced recently that its third season will begin in May with teams from two additional nations to bring its total to 10.
The tour represents “without a doubt” the highest level of competitive sailing, said Spithill, who noted that unlike the two-boat America’s Cup, every SailGP team has access to the same technology and data — and thus has “no excuses.”

What the U.S. team also does not have, according to the 42-year-old helmsman, is a regular supply of the kind of athletic sailors the new breed of foiling boats demand. 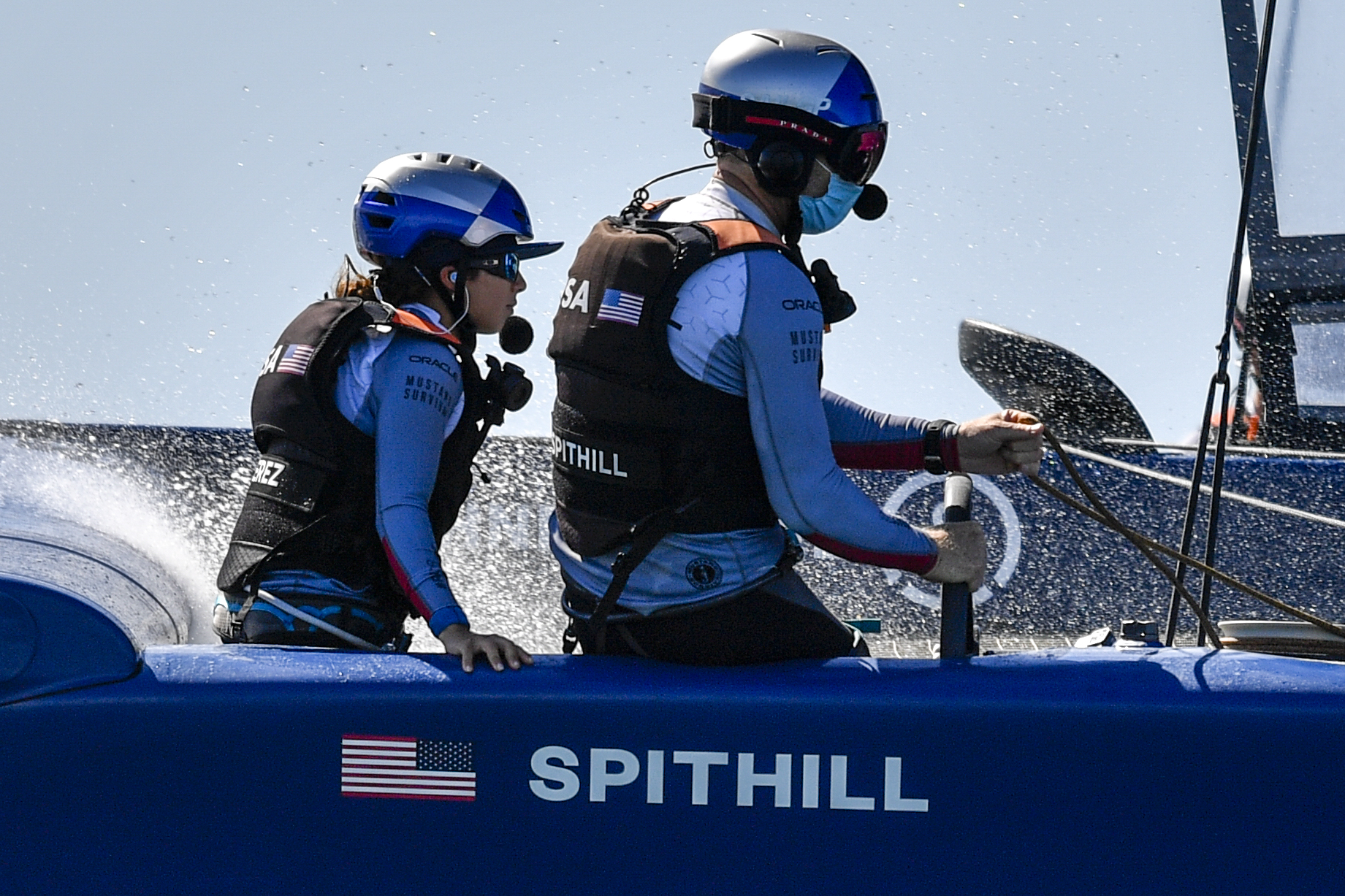 CJ Perez sits behind Jimmy Spithill, CEO and helmsman of the U.S. SailGP team, during a practice session for an event in Spain.
(Ricardo Pinto for SailGP)
To that end and to widen its demographic appeal, his team launched its own initiative, Foiling First, which is meant to provide both a pathway to the sport’s higher levels and another avenue for diversity.

For Perez, who joined Spithill and other team members several weeks ago in a Foiling First camp in Chicago, the program is important because it could help “increase accessibility for communities less exposed to sailing.” 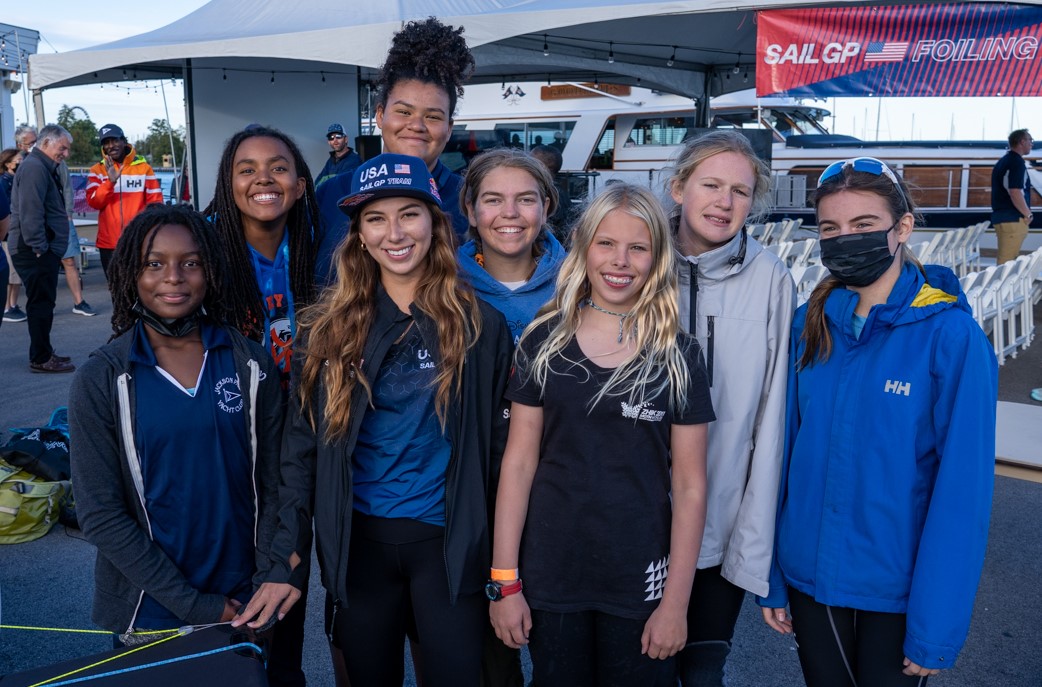 CJ Perez (foreground, second from left) helped show Chicago-area junior sailors the ropes at a Foiling First camp in September
(Sam Greenfield/SailGP)
“You didn’t see many people who came from communities of color; you didn’t see lots of females,” Perez said of the boat clubs where she began competing.
“So that kind of lack of representation is a huge problem, and it’s hard for a person like myself to kind of see themselves achieving at the highest levels of the sport if there’s no representation.

“Everyone should have the opportunity to experience this sport,” Perez added, “and have a shot at pursuing it to the highest level.”

In that light, Perez declared that foiling was not just an exciting version of sailing but “a rebirth.”

“We have this opportunity right now, with foiling,” she said.
"It’s just such a new form of sailing — it’s totally different than the standard concept of sailing. … We can create a new face of sailing.”
Posted by geogarage at 1:42 AM