Walter H. Munk, scientist-explorer who illuminated the deep, dies at 101 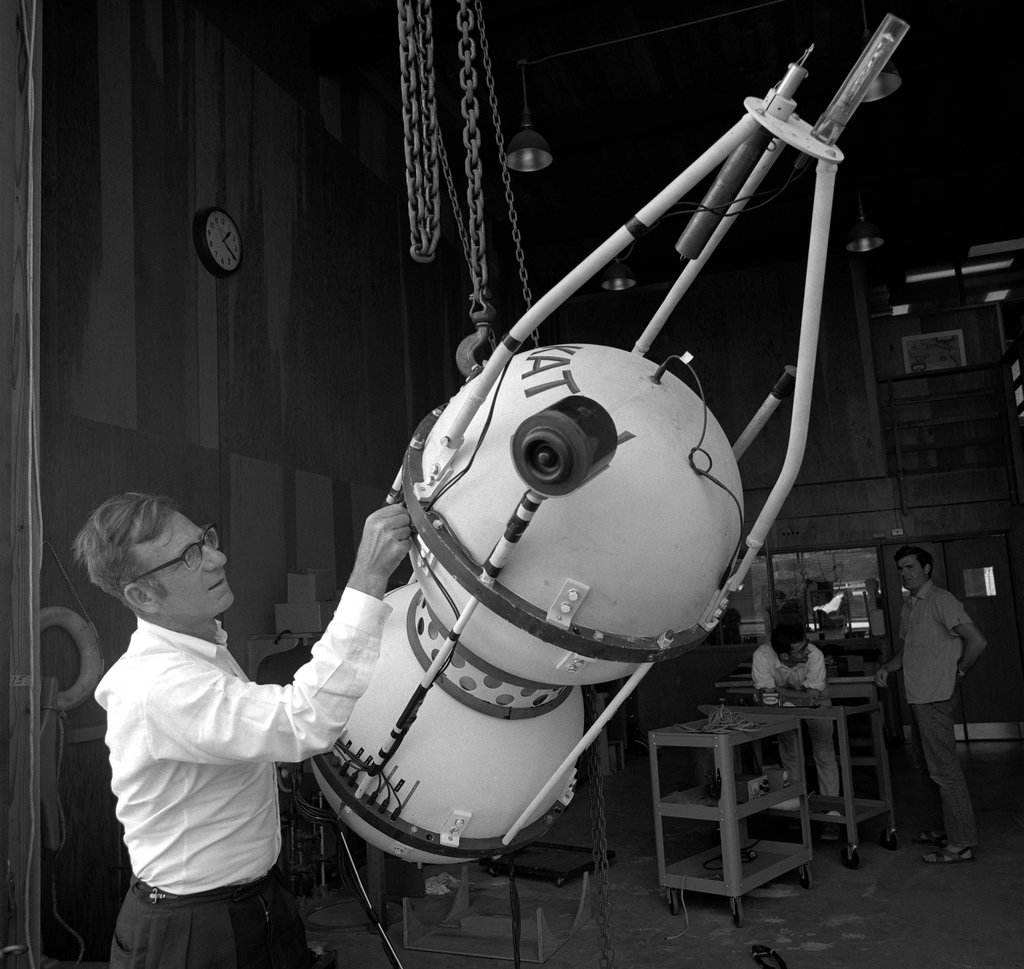 Walter Munk in 1963 with a tide capsule.
The capsule was dropped to the seafloor to measure deep-sea tides before such measurements became feasible by satellite.
Credit Ansel Adams, University of California

From NYTimes by William Dicke

Walter H. Munk, one of the foremost oceanographers of the 20th century, who sent pulses of sound through the vast oceans — probably startling a few whales — to measure changes in water temperatures, forecast waves and seek signs of global warming, died on Friday at his seaside home in the La Jolla section of San Diego.
He was 101.

The University of California, San Diego, reported his death on its website.
His home, named Seiche, is near the university campus, where he spent his career at the Scripps Institution of Oceanography after joining its faculty in 1947.

“We thought he would live forever,” his wife, Mary Munk, told The San Diego Union-Tribune.
She said the cause of death was pneumonia.

Dr. Munk, a scientist-explorer who would expound on his discoveries with exuberance, was sometimes called the “Einstein of the oceans” for his pioneering work in the study of waves, ocean circulation, tides and irregularities in the Earth’s rotation.
(He was also a geophysicist.)


This documentary showcases Walter Munk's research on waves generated by Antarctic storms.
The film documents Munk's collaboration as they track storm-driven waves from Antarctica across the Pacific Ocean to Alaska.
The film features scenes of early digital equipment in use in field experiments with Munk's commentary on how unsure they were about using such new technology in remote locations.

In one 1960s study — which did not have to look far for a subject — he discovered that the waves washing ashore in measured ranks in Southern California had originated thousands of miles away in storms sweeping across the southern Indian Ocean.
The discovery led to improved forecasting of the big waves coveted by surfers.


From Bondi to Bundoran, Pipeline to Mavericks, surfers around the world depend on the surf forecast to catch the perfect wave.
Its inventor, Walter Munk, dies at 101– yet few surfers know his name, despite the debt of gratitude they owe him.

As a young scientist during World War II, he and Harald U. Sverdrup , the director of Scripps at the time, developed a method for predicting the size of the surf on beaches during amphibious landings so that landing craft could avoid being swamped. 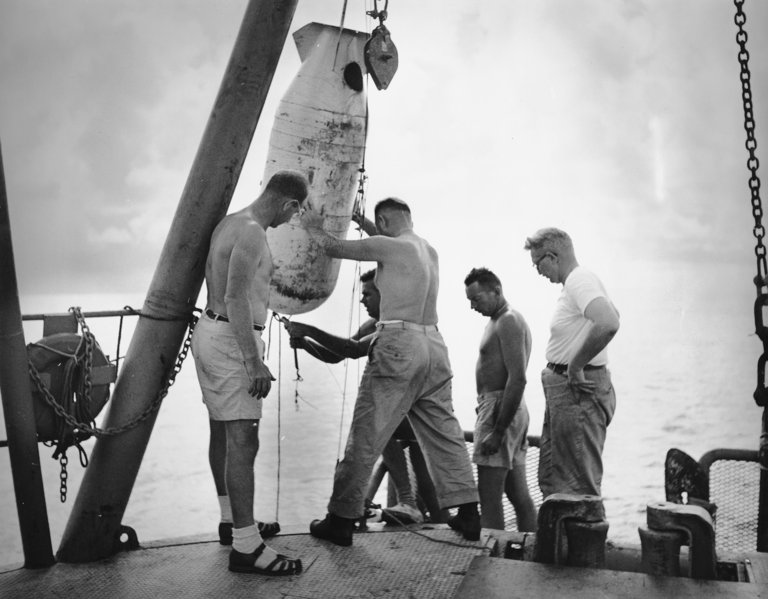 Dr. Munk, left, observing an oceanographic instrument during the Capricorn Expedition (1952-1953), somewhere between Eniwetok and Tonga in the Pacific.
Credit UC San Diego/Scripps Institution of Oceanography

The method was first used in the American landings in North Africa in 1942.
It later predicted, correctly, that the waves would be high but manageable during the D-Day landings by the Allies in Normandy on June 6, 1944.
The technique, also used in amphibious landings in the Pacific, was credited with saving the lives of thousands of soldiers and Marines.

In his research on sound in the oceans starting in the 1970s, Dr. Munk and his colleagues transmitted low-frequency sounds, which at a certain depth can travel thousands of miles without weakening significantly.

Because sound moves faster in warm water than in cold, the technique can measure differences in average temperature over a long distance.
Dr. Munk and his colleagues demonstrated its feasibility by transmitting a pulse of sound from a loudspeaker lowered into the water near Heard Island in the Indian Ocean in 1991.
It was detected by listening stations thousands of miles away.

“And that was the best news that I’ve ever heard,” Dr. Munk told The New York Times in 2015.
The Heard Island broadcasts became known as the “sound heard around the world.”

Walter Heinrich Munk was born on Oct. 19, 1917, in Vienna into a wealthy banking family of Jewish heritage, a son of Dr. Hans Munk and Rega Brunner.
The couple divorced when Walter was a child.
His maternal grandfather, Lucian Brunner, was a prominent banker and Austrian politician.
His stepfather, Dr. Rudolf Engelsberg, was later briefly a member of the Austrian government of Chancellor Engelbert Dollfuss, who was assassinated by Nazi agents in 1934.

Growing up in Vienna, Walter took frequent trips to the Austrian countryside, and his father served occasionally as a chauffeur to Franz Joseph, the Austrian emperor, during World War I.
“He had the only Rolls-Royce in Vienna,” Dr. Munk said.

At 14 he was sent to New York to attend an upstate boarding school with the idea that he would eventually work at a branch of a private New York bank connected to his family.
On graduating, he became a runner at the bank to learn the business from the bottom up.

But after three years, during which he took classes at Columbia University, he decided that he was not cut out for banking and left for California.
He turned up at the California Institute of Technology and asked to be admitted, although he had not filed an application.
The dean, no stickler for procedure, accepted him once he passed the entrance exam.

Walter Munk earned a bachelor’s degree at Caltech in 1939 (the same year be became an American citizen), a master’s degree there a year later and his Ph.D.
at the University of California, Los Angeles, for work done at Scripps.

He volunteered for the Army in 1939, but after 18 months in the ranks he was excused from military service to do research on anti-submarine warfare for the Navy.
His Army unit was subsequently sent to New Guinea to fight the Japanese and was nearly wiped out.

Dr. Munk’s first marriage, to Martha Chapin Munk, ended in divorce.
His second wife, Judith, died in 2006 after more than 50 years of marriage.
He married Mary Coakley in 2011.

In addition to his wife, he is survived by his daughters Edie and Kendall and three grandsons, U.C.
San Diego said.
Another daughter, Lucian, who had been born with a heart defect, died at age 7 in 1961.

After the war, Dr. Munk participated in studies of the atomic tests in the Pacific.
He and a colleague were given 10 days to measure the circulation of water in and out of the Bikini Lagoon before an atomic test there in 1946, and he witnessed it from a raft 10 miles from ground zero.
Because of concerns that an atomic blast might cause a tsunami, he developed a warning system. 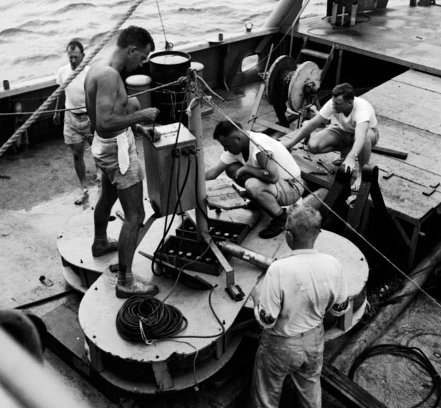 Dr. Munk, standing with his right side facing the camera, with colleagues preparing an instrument raft in 1952 near Eniwetok Atoll, the hydrogen bomb test site, where he monitored the ocean for a potential tsunami

In the 1950s, he carried out research in geophysics, founding an institute for studies in that field at Scripps and explaining with a colleague why the Earth wobbles on its axis and why its spin varies slightly.

Dr. Munk also engaged in research on climate change, particularly how rising sea levels affect the Earth’s rotation (measured in millionths of a second per year).
He praised the 2015 Paris climate accords and called for a global effort to deal with the issue.

During a question-and-answer session at the University of Delaware in 2016, a reporter asked him what society should do about climate change.
Dr. Munk replied, “We should stop melting the ice sheets.”

In another interview, in 2009, he said: “I am very concerned that not much is being done about the heating of the oceans. Two-thirds of the heat that’s been added in the last 50 years has gone into the ocean, and only one-third in the atmosphere. If there wasn’t available ocean on this planet for heat storage, the warming of the atmosphere would have been three times as big.”

Throughout his career, Dr. Munk shifted into different areas of research as the spirit moved him.

“You’ll see that I’ve been a dabbler,” he said in an interview with Scientific American in 1995.
He added: “I’m not much of a scholar. I don’t like to read. I like to work in a field that has nothing published, where you have to figure it out for yourself.”

Self-effacingly, he never took to the sobriquet “Einstein of the oceans.”
“Einstein was a great man,” he once said to The Union-Tribune.
“I was never on that level.”