The crack in this Antarctic ice shelf just grew by 11 miles. A dramatic break could be imminent.

From The WashingtonPost by Chris Mooney

An enormous rift in one of Antarctica’s largest ice shelves grew dramatically over the past month, and a chunk nearly the size of Delaware could break away as soon as later this winter, British scientists reported this week.
If this happens, it could accelerate a further breakup of the ice shelf, essentially removing a massive cork of ice that keeps some of Antarctica’s glaciers from flowing into the ocean.
The long term result, scientists project, could be to noticeably raise global sea levels by 10 centimeters, or almost four inches.
It’s the latest sign of major ice loss in the fast warming Antarctic Peninsula, which has already seen the breakup of two other shelves in the same region, events that have been widely attributed to climate change.
The crack in the ice shelf, known as Larsen C, has been growing at an accelerating rate.
Since the beginning of December, it has grown about 11 miles in length, after extending 13 miles earlier in the year. In total, the rift has grown about 50 miles since 2011 (it’s almost 100 miles long in total), and has widened to well over 1,000 feet.
Now, only 12 miles of ice continue to connect the chunk with the rest of the ice shelf. 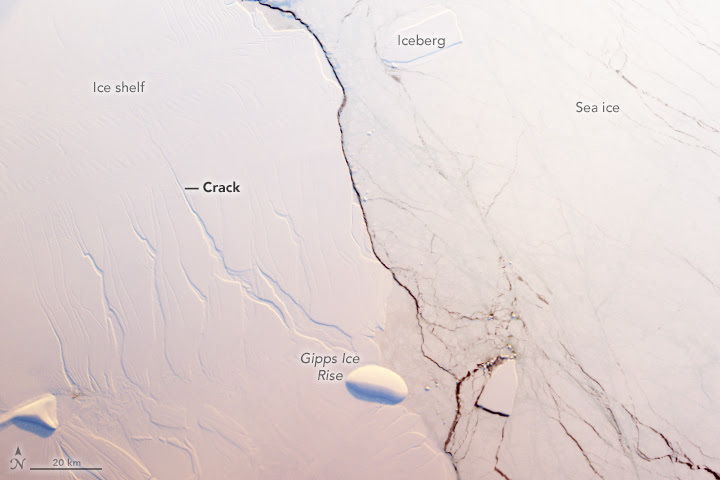 When it breaks away, the loss would be of nearly 2,000 square miles of ice, say the researchers with Project MIDAS, a British government-funded collaboration based at Swansea and Aberystwyth universities in Wales.
That’s larger than Rhode Island and almost as big as Delaware.
The consequences of the break could be dramatic.
“When it calves, the Larsen C Ice Shelf will lose more than 10% of its area to leave the ice front at its most retreated position ever recorded; this event will fundamentally change the landscape of the Antarctic Peninsula,” said the researchers in a statement about the rift.
“We have previously shown that the new configuration will be less stable than it was prior to the rift, and that Larsen C may eventually follow the example of its neighbour Larsen B, which disintegrated in 2002 following a similar rift-induced calving event.”

The British Antarctic Survey also released a statement on the growing rift, saying a huge iceberg is “set to calve” from Larsen C.
“Because of the uncertainty surrounding the stability of the Larsen C ice shelf, we chose not to camp on the ice this season,” David Vaughan, the survey’s director of science, said in the statement.
The floating ice shelf is fed by the flow of ice glaciers that sit above sea level on the Antarctic Peninsula. As the shelf loses mass, these glaciers could flow more quickly — which would contribute to rising sea levels. Losses from the ice shelf alone, however dramatic, would not have that effect, as the shelf is already floating on water, just like an ice cube in a glass of water.
Fortunately, the Antarctic Peninsula does not contain nearly as much ice as other, thicker parts of Antarctica, such as the West and East Antarctic ice sheets.
The potential sea level rise if Larsen C is lost would be measured in centimeters, not feet.
Still, it would subtract a major, enduring feature from the planet, and add to already dramatic changes that have been seen in the Antarctic Peninsula, the portion of the icy continent that extends northward towards South America.

Two smaller ice shelves near Larsen C – Larsen A, and Larsen B – have already largely disintegrated. Larsen B retains a remnant of its former size, but scientists have determined that this ice, too, could vanish before too long.
They have also documented that following the collapse of much of the Larsen B ice shelf in 2002, the glaciers behind it sped up their flow towards the sea.
Now, the fear is the same process could be unleashed on the larger Larsen C shelf.
The Larsen C ice shelf is more than 1,000 feet thick, and in spatial extent, nearly the size of Scotland. It is the fourth-largest ice shelf in Antarctica, although nothing compared with the two largest, the Ross and Filchner-Ronne ice shelves.


An iceberg expected to be one of the 10 largest ever recorded is ready to break away from Antarctica, scientists say. A long-running rift in the Larsen C ice shelf grew suddenly in December and now just 20km of ice is keeping the 5,000 sq km piece from floating away.
Larsen C is the most northern major ice shelf in Antarctica.
Researchers based in Swansea say the loss of a piece a quarter of the size of Wales will leave the whole shelf vulnerable to future break-up.

NASA, during a flight in November, captured several spectacular photos of the rift, including the one at the top of this article and also the close-up below.
But that was before further extension of the rift last month.
The Antarctic continent is ringed with ice shelves, which are the ocean-front portions of larger glaciers.
But as the climate changes, these features have been thinning and in some cases breaking apart dramatically.
The Project MIDAS group did not immediately make a statement attributing the development at Larsen C to climate change, but the fact that the shelf would be “at its most retreated position ever recorded” after the break is certainly suggestive.
Previous research has also documented that the Larsen C ice shelf is becoming less thick, and so floating lower in the water, and this appears tied to the warming of the Antarctic Peninsula in recent decades.
Warmer seas could also be playing a role.

Now, the wait for the anticipated break begins.
Swansea University’s Adrian Luckman, who heads up Project MIDAS, told the BBC that “If it doesn’t go in the next few months, I’ll be amazed.”
Daniela Jansen, a researcher with the Alfred Wegener Institute in Germany who collaborates with the Project MIDAS team, largely agreed in an email to The Washington Post.
“I think the iceberg will calve soon,” she said.
“The jumps of the rift tip occurred in shorter time intervals the longer the rift got. This is probably due to the longer ‘lever’ for the forces acting to advance the rift, such as the up and down of the tides or strong winds towards the sea. Whether it will be months or maybe next year, I don’t know.”