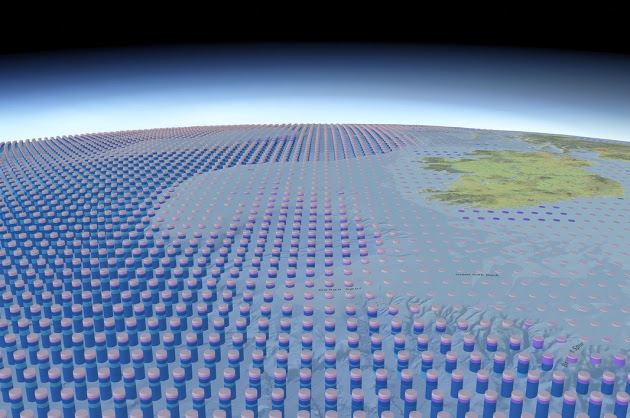 Oceanographers are carving up the world’s seas like the last of the holiday turkey.
A new 3D map sorts global water masses — from deep, frigid circumpolar waters to the oxygen-starved Black Sea — into 37 categories.


Clicking on the map will display information about ecological marine units based on a clustering analysis that was preformed against NOAA’s World Ocean Atlas Data.
The interactive map allows you to zoom and pan and interact with the data by clicking on the map.
Clicking the points on the map enables you to explore the depth (vertical) profile and associated oceanographic information for the selected location.
Please explore this fascinating ocean dataset and discover the (statistically) different clusters and what makes each one of them unique.
Access Open Data online

The map groups together marine regions of similar temperature, salinity, oxygen and nutrient levels. It has been available for only a few months, and researchers are still working through how they might use it.
But its international team of developers hopes that the map will help conservationists, government officials and others to better understand the biogeography of the oceans and make decisions about which areas to preserve.
It could also serve as a data-rich baseline for analysing future ocean changes.

EMUs rendered at the bottom of the water column.

Many existing systems also attempt to classify variations in the ocean, such as lists of large marine ecosystems or the Longhurst biogeographical provinces that are defined by the rate at which ocean life consumes carbon.
But these are often limited to surface or coastal ecosystems.
The latest effort, known as the ecological marine units (EMUs), is the most detailed attempt yet to cover the global ocean in three dimensions.

“What’s often missing is all that’s between the surface of the ocean and the ocean bottom,” says Dawn Wright, chief scientist of Esri, a geographic information-systems company in Redlands, California, that helped to develop the 3D map.
“That’s what our project will hopefully bring to the table.”

Esri launched a web portal for the EMU data in September, and has been presenting the concept at conferences since then.
Wright described it on 16 December in San Francisco, California, at a meeting of the American Geophysical Union.

Ecological Marine Units (EMUs) are Esri's gift to a world
whose final unexplored terrain lies beneath its seas.

EMUs can help to reveal why marine animals live where they do. In the eastern tropical Pacific Ocean the mapping shows a complex interplay between oxygen-rich and oxygen-poor waters.
The boundary of the low-oxygen zone shifts towards the surface in some spots and dips deeper in others.
That variation affects the locations of economically important tuna fisheries, says Patrick Halpin, a marine ecologist at Duke University in Durham, North Carolina.
“It’s an interesting thing to look at in three dimensions, fairly unique and gratifying.”

Such data could guide the United Nations’ effort to designate a series of ecologically or biologically significant marine areas to focus future conservation efforts, Halpin notes.
Looking at the distribution of EMUs could help officials to pinpoint the boundaries of those areas, or to make sure they are designating enough waters to capture all the biogeographic diversity.

And the South African National Biodiversity Institute is interested in using EMUs to update data on open-ocean and deep-sea habitats for the country’s next national biodiversity assessment, due in 2019, says Heather Terrapon, a spatial analysis coordinator at the institute in Cape Town.
Nations that do not have the money to gather their own data sets could use the free EMU data and visualizations to manage their marine resources, says Peter Harris, a marine geologist at the environmental information-management centre GRID-Arendal in Arendal, Norway.

The creation of the EMUs is the second step in a project that started with similar mapping on land. The intergovernmental Group on Earth Observations asked Roger Sayre, an ecologist at the US Geological Survey in Reston, Virginia, to lead a team to categorize terrestrial eco­systems.
The researchers, including some at Esri, combined information on geology and vegetation to generate nearly 4,000 ‘ecological land units’.
One example might be warm, wet plains, on metamorphic rock, with mostly deciduous forest.

Next, the team moved their focus from land to the oceans.
“It’s like total world domination in ecosystem mapping,” says Sayre, who heads the EMU project with Wright

They began with 52 million data points in the World Ocean Atlas maintained by the US National Oceanic and Atmospheric Administration.
These include information on chemical and physical parameters gathered every 27 kilometres to create a 3D grid.
The team added other data such as the shape of the sea floor and used statistical techniques to group the results into categories.

The resulting EMUs include the deep, very cold, low-oxygen waters that encompass roughly one-quarter of the world’s oceans.
Others are much smaller, such as the upper waters of the Red Sea, or the dilute estuaries of several Northern Hemisphere rivers.

For now, the EMU maps rely on data averaged over five decades.
Looking at conditions over shorter periods of time, such as seasons, would provide more helpful detail, says Frank Muller-Karger, a biological oceano­grapher at the University of South Florida in St Petersburg who has been comparing EMUs with weekly maps of coastal changes made using satellite imagery.
And to monitor change over decades, the EMU team would need to recalculate its maps every five years or more.

The EMU developers say that future iterations of the system could tackle such issues.
For now, they are hoping to expand on the land and marine units by creating new categories for coastal and freshwater ecosystems.