Chasing the world's biggest wave: Surfer turns to space technology to find the largest walls of water on Earth

Compilation of the Biggest waves ever surfed at Nazare Portugal.
The waves at Praia do Norte, Nazaré, are famed for being among the largest in the world.

It is a sport famed for the laid back attitude of those who take part, but now surfing is being revolutionised by technology in space.
The world's leading surfers are turning to science to help them find the new surfing spots and identify the perfect conditions for catching the ultimate prize in their sport - big waves.
Surfing has taken on new levels of competitiveness in recent years as surfers have sought out some of the biggest waves on the planet in an attempt to ride them.

The world record is held by Garrett McNamara, who surfed a 78 feet tall wave at surfing hotspot Nazare, 80 miles north of Lisbon in Portugal.
Yet finding such towering walls of water is becoming increasingly challenging as surfers try to find new areas that might offer waves that are even bigger.
But Andrew Cotton, a 36-year-old plumber from Devon, believes he has found an entirely new area on the coast of Ireland that has the potential to produce some of the biggest waves on the planet.
With the help of satellite technology, oceanographers and weather experts, he was able to identify a previously unknown surfing spot and unravel the conditions needed to get the best waves.

His journey to surf this giant wave in October 2014 is revealed in a new film by Red Bull called Beneath the Surface.
Mr Cotton said: 'Considering Ireland had such a bad winter, we probably saw the biggest waves in Ireland and Britain for the year.
'The exciting thing for me and any surfer, is that it is not just sheer size but the quality.
'Ireland is quite a unique place. Although it is quite popular with big wave surfers, it is really hard to score good waves. The weather is so hard to predict.
'My dream and my passion is to surf big waves, if not the biggest waves in the world. This new wave in Ireland has that potential.
'I've surfed some pretty big waves and this location with the right conditions it could produce waves to match that.'

Mr Cotton estimates he managed to surf waves around 30 feet tall at the site, which he is not revealing the exact location of, but thinks it may produce waves of at least 60 feet in the right conditions - the equivalent of four double-decker buses stacked on top of each other. 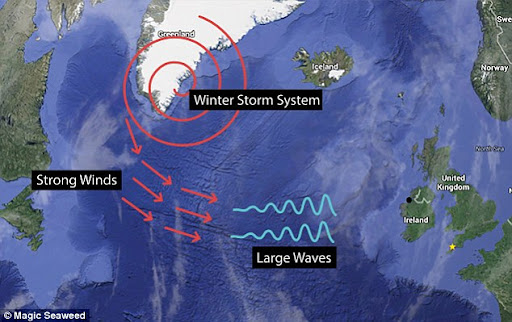 Big wave surfing requires the right combination of location and weather conditions.
When winds are able to push water unimpeded across open stretches of ocean, the waves can grow to monstrous heights (illustrated)

He first spotted the location of the wave from nearby headlands and had been captivated by the white caps he could see on the swell in the bay.
To work out whether the area might be able to produce big waves though, Mr Cotton turned to Ben Freeston from surf-forecasting company Magic Seaweed.

There are several ingredients they look for to find a big wave:

Waves are created by the wind blowing across the surface of the water, creating friction and building up the size of the swell.
What determines the size of a wave is the strength of the wind, how long the wind has been blowing for and the distance over which the wind has been blowing over the ocean, known as the fetch.
Mr Freeston said: 'The biggest waves come from the strongest winds, blowing for the longest time over the largest stretch of ocean. 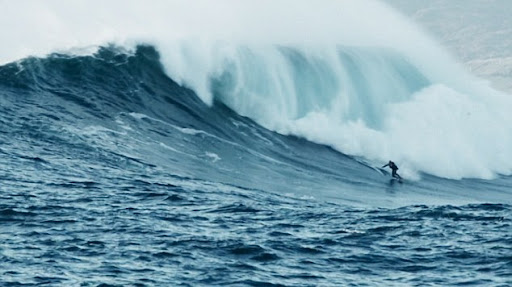 Mr Cotton estimates he managed to surf waves around 30 feet tall at the site, which he is not revealing the exact location of, but thinks it may produce waves of at least 60 feet in the right conditions - the equivalent of four double-decker buses stacked on top of each other

'There are some specifics, you need a large unbroken stretch of ocean, but the storms themselves tend to form in bands of latitude about 40 degrees north and the roaring 40s in the south.
'These storms always move from the west to the east, so you are always looking at coastlines facing out towards the west.'

It just so happens that the west coast of Ireland sits perfectly in this band where the wind roars across the Atlantic, whipping up the swell to huge heights.
The Irish coast faces 2,000 miles of unbroken
Mullaghmore Head is one of the most famous big wave spots in Ireland, and has seen people surfing waves up to 49 feet in height in stormy weather.

The right combination of rocks and depth is important for big waves to form.
Big wave spots tend to have deep water channels that run up to the coast and are fringed with reefs or rocks on either side.
In some spots like Nazare in Portugal the sandy bottom of the beach has a canyon off shore that refracts the waves inwards
Underwater mapping helps Mr Freeston work out how the potential for waves along a given bit of coastline and can also help to predict the shape of the wave when it breaks. 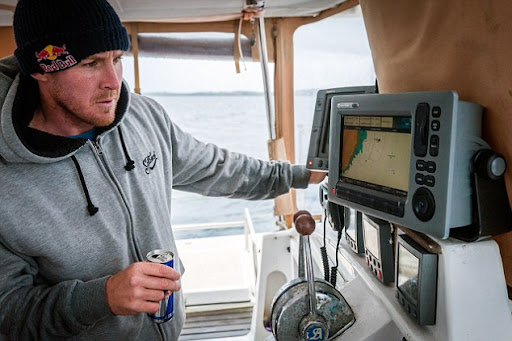 He said: 'Andrew's wave has an area of rock that has fortuitously formed with deep water on either side and has the right shape to make the wave very large when it breaks.'
Nautical charts and historical charts of the coastline can also help to provide some clues about what may lie beneath the waves.

Using satellite data going back nearly 35 years, Mr Freeston and his colleagues are able to reconstruct the ocean conditions almost anywhere in the world.
They can calculate the wave heights from this at any given hour and then compare this to the weather conditions at the time.
This means it becomes possible to accurately identify the exact criteria for when big waves will be possible. 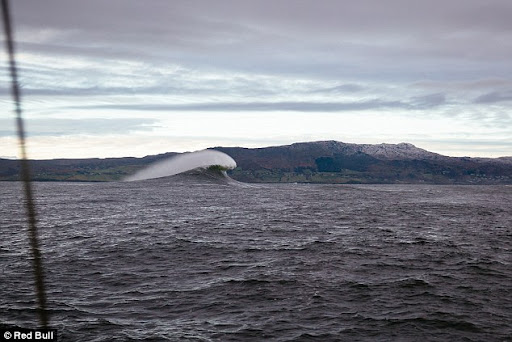 Mr Cotton said: 'Very quickly we were able to work out that this place gets its best waves when the swell comes from a certain direction. If it varies slightly to the north or south, it is half the size.
'It took four years to work that out for Nazare. We have come a long way in being able to work out the conditions for big waves.
'That is really important as you might only get the right conditions twice a winter, and if you go to the wrong place that is a waste.'


Andrew Cotton on the Nazaré wave that changed his life

Waiting for the weather

Big waves generally occur when storms sweep across the ocean.
In Ireland this can mean the autumn and winter as the tip jet phenomenon in the Labrador sea around the south of Greenland can send powerful swells across the Atlantic.
This year the swell coming across the Ireland was abnormally poor.
Mr Freeston believes this may have been largely due to El Nino altering the weather patterns.
He said: 'It has actually been quite a bad winter. The storms were coming in much further to the south.' 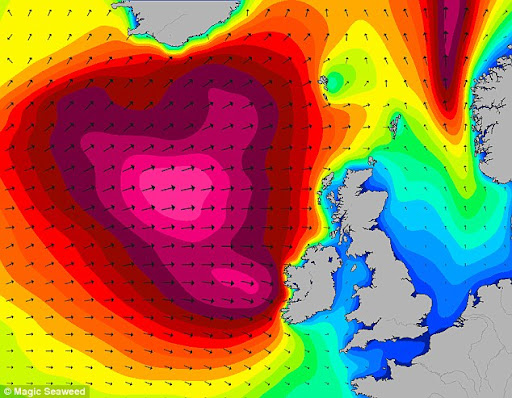 A chart from January 2014 shows one of the highest ever recorded swells in the region, where the potential for record breaking waves will be at it’s highest 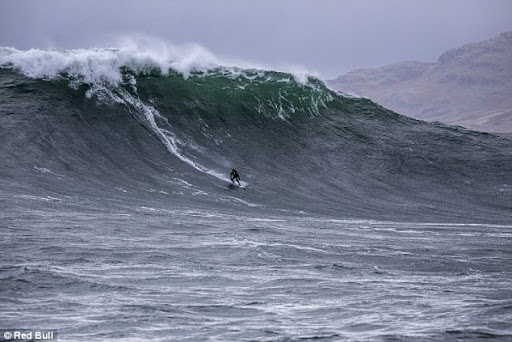 The waves that Mr Cotton rode at his new spot appeared in relatively light wind conditions.
The site has the potential to produce much bigger swells as winds increase in ferocity

But looking at his data from previous years, he believes the spot Mr Cotton has identified could produce some huge waves.
Mr Freeston added: 'It was an abnormally poor year this year. Given the size of the waves he did surf, the potential for the future is pretty enormous.
'Put in context of waves seen at Mulgamore and other places in previous years, you have got to think that 50-60 ft range as a potential doesn’t seem unrealistic.'
However, surfers also need to remain safe, so finding these big waves does not just require storms that sweep across the ocean, but gaps in the wind that bring large swell but light winds. 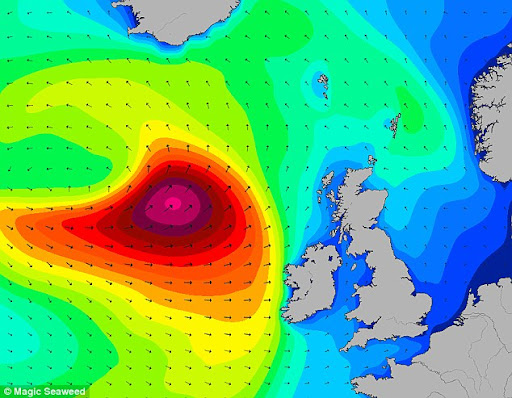