With this mission, SpaceX’s Falcon 9 rocket will deliver the Jason-3 satellite to low-Earth orbit for the U.S. National Oceanic and Atmospheric Administration (NOAA), National Aeronautics and Space Administration (NASA), French space agency Centre National d'Etudes Spatiales (CNES) and the European Organisation for the Exploitation of Meteorological Satellites (EUMETSAT).
The Jason-3 launch is targeted for a 18:42 UTC launch from Space Launch Complex 4E at Vandenberg Air Force Base, California.
If all goes as planned, the Jason-3 satellite will be deployed approximately an hour after launch.
This mission also marks an experimental landing of the first stage on the SpaceX drone ship “Just Read the Instructions”.
The landing of the first stage is a secondary test objective.

A US-European satellite that is fundamental to our understanding of the oceans has launched from California.
Jason-3 will measure the shape of the global sea surface to an accuracy of better than 4cm.
It will track currents, tides, winds, wave heights, and will help forecast the intensity of storms.
But the new mission will also maintain the reference data-set on sea-level rise.
This shows the world's oceans to be rising at more than 3mm per year.
Jason-3 was launched atop a SpaceX Falcon-9 rocket from Vandenberg Air Force base at 10:42 local time (18:42 GMT) yesterday.
The flight to orbit took just under the hour.
An attempt by SpaceX to recover the bottom part of the Falcon by landing it back on a sea barge came very close to success.

SpaceX has tried again to land the Falcon 9’s first stage on one of the NewSpace firm’s Autonomous Spaceport Drone Ships for the launch of Jason 3.
"Just Read the Instructions" is the baseline of the platform ;-)
Photo Credit: SpaceX

but SpaceX said a landing leg failed to lock properly.
"Definitely harder to land on a ship.
Similar to an aircraft carrier vs land: much smaller target area, that's also translating & rotating."

The booster found the platform but could not remain upright because a landing leg failed to lock.
As a result, it toppled over and exploded.
The rocket company had managed a historic first controlled return of an orbital stage last month.


Did you know satellites can measure Earth’s oceans from space?
The Jason-3 satellite, set to launch in January 2016, will collect critical sea surface height data, adding to a satellite data record going back to 1992.
The ocean is an important driver of weather and climate on the planet, and forecasters need this information to predict the intensity of devastating hurricanes before they reach our shores. Jason-3 will also help us track the rise in sea-level over time, allowing our coastal communities to prepare and adjust to a changing climate.

Jason-3 will spend the coming weeks being moved into a position some 1,336km above the Earth where it can make tandem measurements with its still-operational predecessor, Jason-2.
This will enable scientists to cross-calibrate their altimeters - the microwave radar instruments they use to map the various "hills" and "valleys" in the ocean surface below.
Understanding these variations in elevation has myriad applications, both short term and long term.
Just as air pressure tells meteorologists what is going on in the atmosphere, so ocean height will betray details about the behaviour of water below just the top layers.
The data gives clues to temperature and salinity.
When combined with gravity information, it will also indicate current direction and speed.
The oceans store vast amounts of heat from the Sun, and how they move that energy around the globe and interact with the atmosphere are what drive key elements of our weather and the climate system.

A classic example is the El Niño phenomenon, which is in play at the moment.
This sees usually cold waters in the eastern central Pacific overtaken every few years by a surge of warm waters from the west.
This disrupts weather patterns worldwide, bringing drought to some areas and intense rainfall to others.
The Jason satellites act as an early warning system for El Niño by detecting the developing bulge in surface waters associated with the warming. 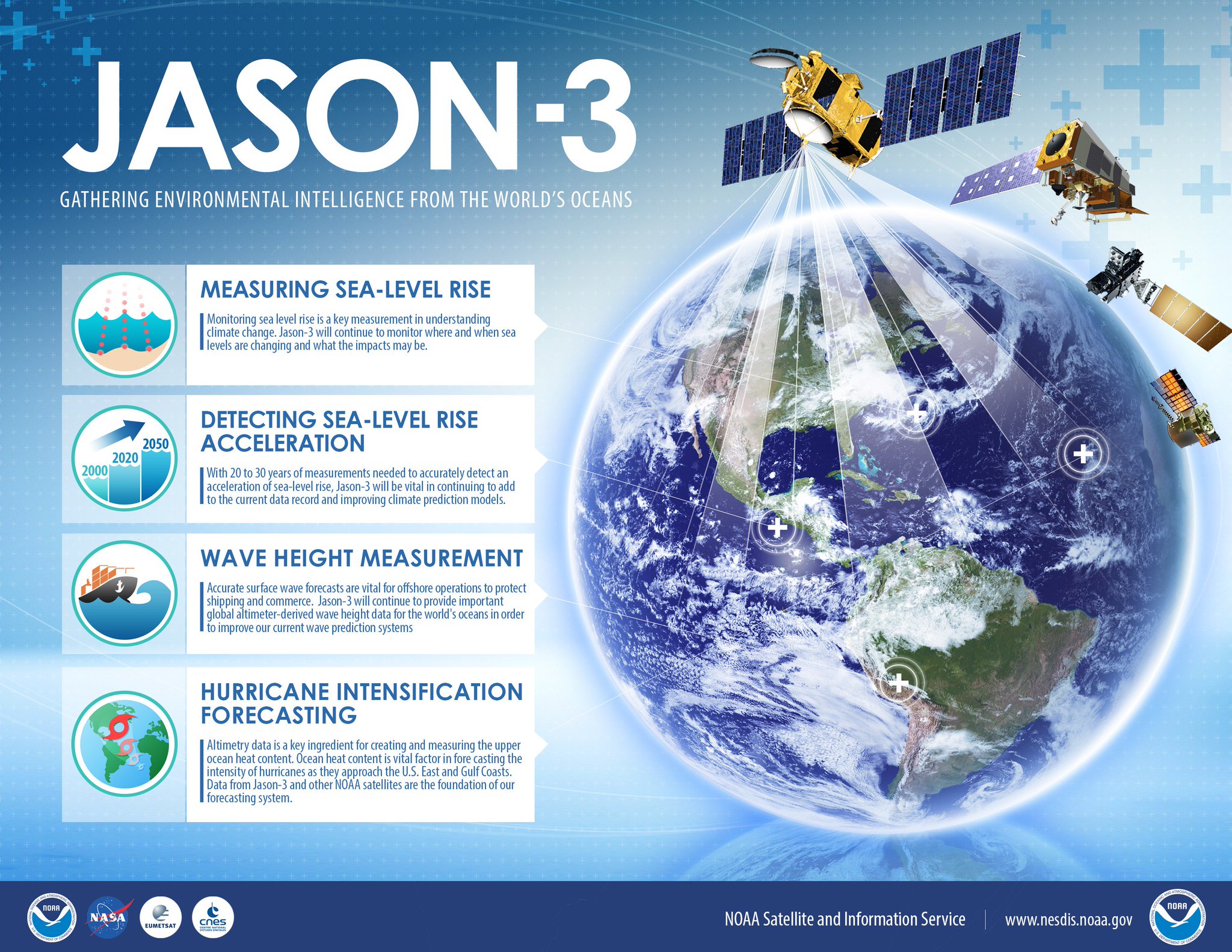 Did you know satellites can measure the height of Earth’s oceans from space?

The mission series, which started in 1992, has always been a US-European venture, but the number of organisations involved has grown over time and now includes the US and French space agencies (Nasa and Cnes) and the premier weather satellite services on both sides of the Atlantic - Noaa and Eumetsat.
For future Jason missions, this co-operation will be extended further, to include the European Space Agency (Esa) and the European Commission.
This wider interest underlines the importance of the satellite data, and the stronger partnership should ensure the continuation of the series.
Europe will be folding Jason into its Sentinel programme of Earth observers, giving follow-on spacecraft the designation "Sentinel-6".