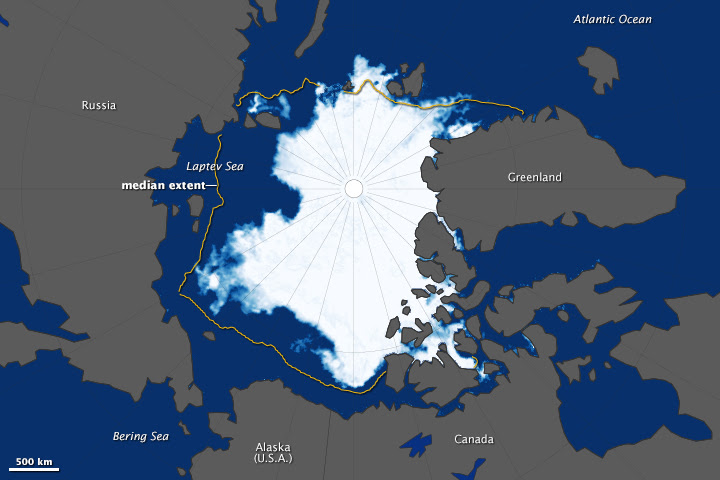 acquired September 17, 2014
The yellow outline on the map shows the median sea ice extent observed in September
from 1981 through 2010.


Arctic sea ice continued its long-term decline in 2014, as the ice reached its annual minimum extent on September 17.
According to the National Snow and Ice Data Center (NSIDC), Arctic sea ice covered just 5.02 million square kilometers (1.94 million square miles) this summer, an extent similar to 2013 and well below the 1981–2010 average of 6.22 million square kilometers (2.40 million square miles).
The 2014 sea ice extent was the sixth lowest recorded in the modern satellite era.
The summer started off as a relatively cool one, and lacked the big storms or persistent winds that can break up ice and increase melting, said Walter Meier, a research scientist at NASA's Goddard Space Flight Center.
“Even with a relatively cool year, the ice is so much thinner than it used to be,” Meier said.
“It's more susceptible to melting.”


An animation of daily Arctic sea ice extent in summer 2014, from March 21, 2014 to Sept. 17, 2014 – when the ice appeared to reach it’s minimum extent for the year.
It’s the sixth lowest minimum sea ice extent in the satellite era.
The data was provided by the Japan Aerospace Exploration Agency from their GCOM-W1 satellite’s AMSR2 instrument.
Credit: NASA Goddard’s Scientific Visualization Studio/Trent Schindler

The Northwest Passage remained ice-bound this summer.
But a patch of open water stretched far north of Siberia in the Laptev Sea, reaching 85 degrees north. It is the farthest north that scientists have observed open ocean water in the satellite era, Meier said.

While summer sea ice has covered more of the Arctic in the past two years than in the record low of 2012, it does not mean the Arctic is returning to average conditions.
This year's minimum extent fits with a long downward trend in which the Arctic Ocean has lost about 13 percent of its sea ice per decade since the late 1970s.

To measure sea ice extent, scientists include areas that are at least 15 percent ice-covered.
The NASA-developed computer program, which is one of several methods scientists use to calculate extent, is based on data from sensors on the NASA's Nimbus 7 satellite, which operated from 1978 to 1987, and the U.S. Department of Defense's Defense Meteorological Satellite Program, which has provided information since 1987.

The map (at the top) shows the extent of arctic sea ice on September 17, 2014.
The map is based data from the Advanced Microwave Scanning Radiometer 2 (AMSR2) sensor on Japan's Global Change Observation Mission 1st-Water (GCOM-W1) satellite. 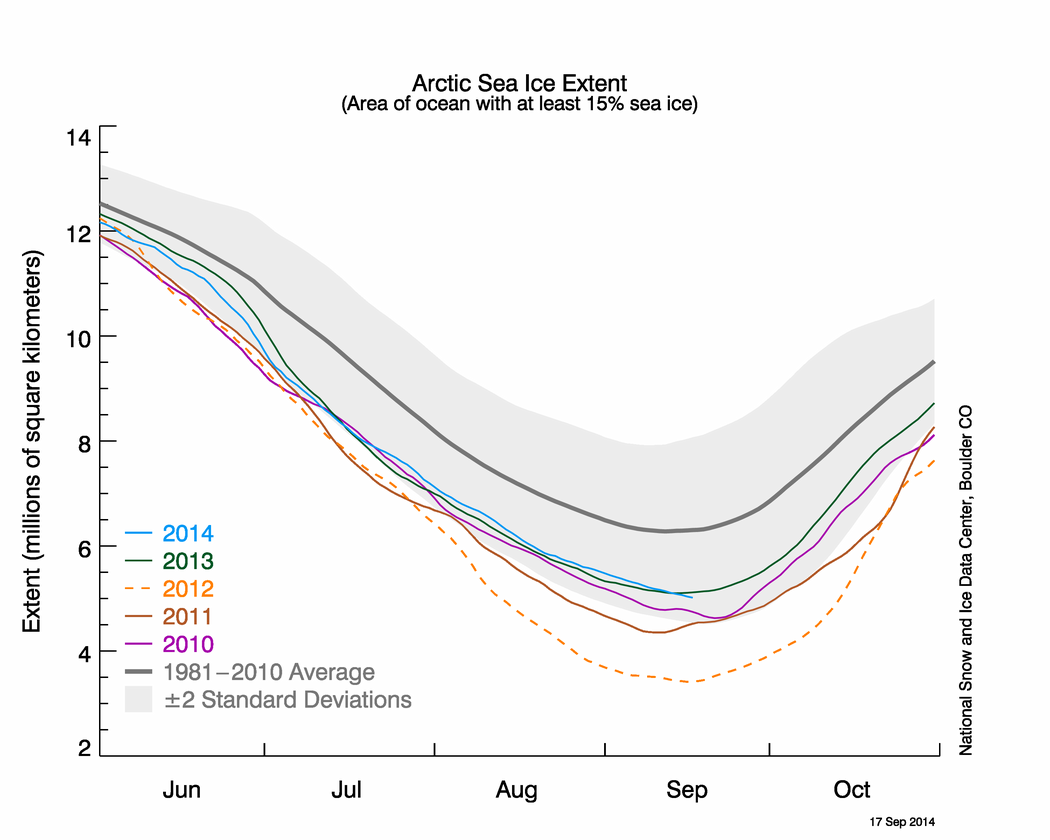 Meanwhile, sea ice on the other side of the planet was headed in the opposite direction.
The second map, also based on data from the AMSR2 sensor, shows Antarctic sea ice on September 19, 2014.
While it was not yet possible to determine if the ice had reached its maximum extent for the year, the five-day average had already surpassed 20 million square kilometers (7.70 million square miles) for the first time in the modern satellite record, according to NSIDC. 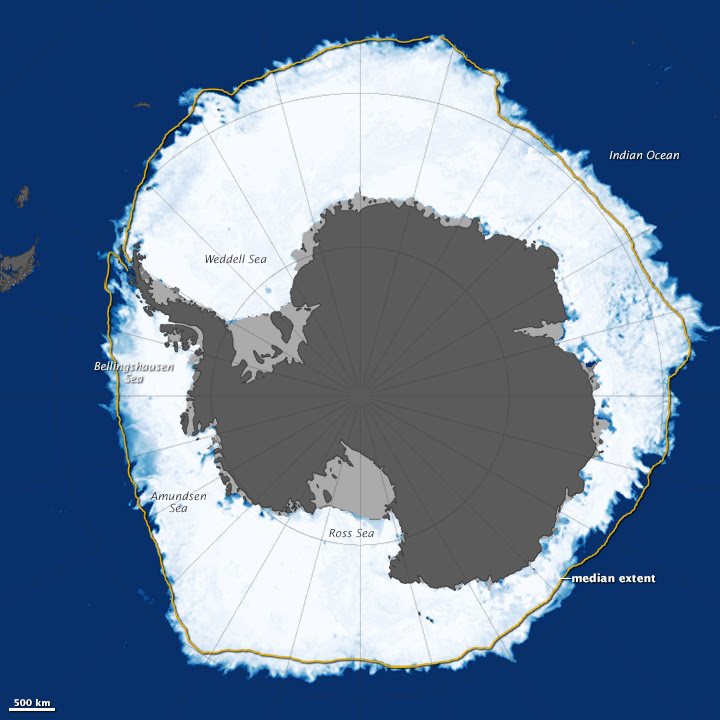 “This is not unexpected,” said Nathan Kurtz, a cryospheric scientist at NASA Goddard.
He noted that many climate models actually predict a short-term increase in Antarctic sea ice.
Factors like increasing fresh water and higher wind speeds promote ice growth and expansion—factors that appear to be dominating right now.
In the long-term, Kurtz added, “increasing near-surface air temperatures are expected to have the stronger effect and begin to melt the ice and halt the expansion.”

Sea ice around Antarctica has been increasing, but not by much.
“The overall trend of sea ice expansion in the Antarctic is only one-third of the magnitude of the decrease in arctic sea ice,” Kurtz said.

Antarctic sea ice develops and evolves under vastly different circumstances than Arctic sea ice.
In the north, sea ice sits in a nearly land-locked ocean, while sea ice in the southern hemisphere exists in the open ocean surrounding an extensive land mass.
This geography affects how the ice expands and retreats in response to climate, leading in part to the differing sea ice scenarios at the two poles.