HROV Nereus Animation from Woods Hole Oceanographic Inst.
From a functional point of view, Nereus kind of operates in two different modes.
It can operate as an autonomous vehicle, which means it is able to survey the sea floor with very little direct human control.
The unique characteristic that the vehicle has is that it can actually convert from this autonomous vehicle into one that is tethered to the surface vessel.
The Nereus tether is quite unique.
We actually dangle a reinforced cable over the side of the ship down to a point where the ocean is quite quiet. And from that point to the bottom, we actually tether the vehicle with this tiny slender fiber, something that's approximately the size of a human hair.
In ROV mode, that cable allows us to have direct control over the vehicle's actions because there are certain functions that the vehicle has to perform that require human ability to adapt to situations and to actually guide the manipulator arm.
So images come back on the fiber and we send commands down to the vehicle over that same fiber.
Nereus represented sort of a step change, in an evolutionary sense, to improving our ability to understand the oceans through the use of technology.

One of the world's most capable deep-sea research subs has been lost.

The robotic vehicle Nereus went missing while exploring one of the ocean's deepest spots: the Kermadec Trench, which lies north east of New Zealand.

Deep unknown. The Kermadec trench off New Zealand
Using one of the most advanced robotic submersibles in the world, scientists have just plunged to one of the deepest points on Earth.


Surface debris was found, suggesting the vessel suffered a catastrophic implosion as a result of the immense pressures where it was operating some 10km (6.2 miles) down.

Nereus was a flagship ocean explorer for the US science community.
"Nereus helped us explore places we've never seen before and ask questions we never thought to ask," said Timothy Shank, from the Woods Hole Oceanographic Institution (WHOI), which managed the sub's activities.
"It was a one-of-a-kind vehicle that even during its brief life brought us amazing insights into the unexplored deep ocean, addressing some of the most fundamental scientific problems of our time about life on Earth."

Nereus was a new class of robotic vehicle, capable of descending into parts of the ocean that have previously been unexplored, and I think it's fair to say, that will result in new discoveries about our ocean environment.


The $8m (£4.7m) robot was built in 2008 and could operate in an autonomous mode or remotely controlled via a tether to a support ship to explore the Earth's deepest oceanic trenches.
It used a lot of innovative technologies that allowed it to do things and go places that were off-limits to other research submersibles.
These technologies included rechargeable lithium-ion batteries, similar to those used in laptop computers, for extended power, and single-hair's-width fibre-optic cables - borrowed from torpedoes - for control and telemetry. 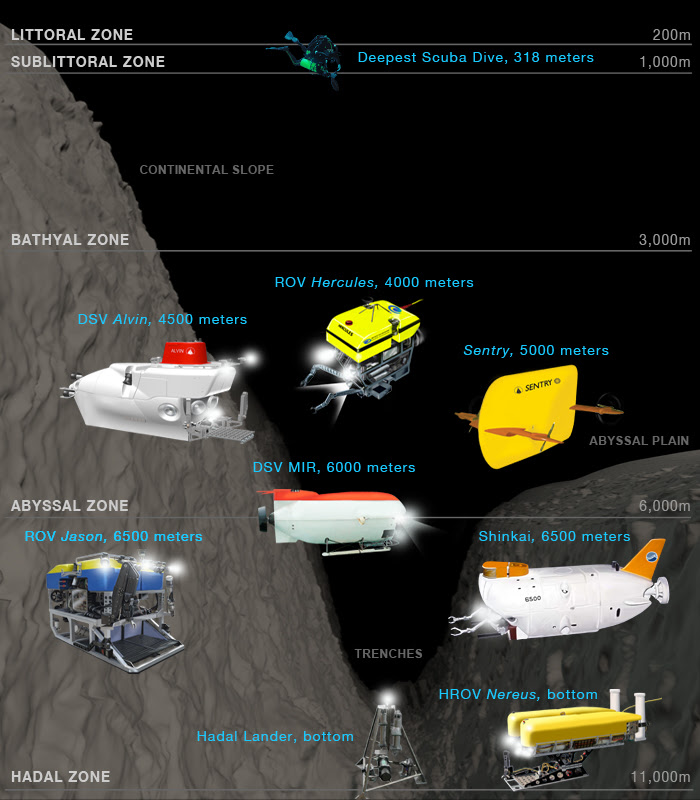 Leading British oceanographer Jonathan Copley, from the University of Southampton, said the loss of an underwater vehicle was an ever-present risk.
"To obtain some kinds of knowledge - particularly when physical samples are required for analysis - there is no alternative to sending equipment into the deep ocean, because the ocean's watery veil masks its depths from many forms of 'remote sensing'", he wrote on a University of Southampton blog this weekend.
"And although we have learned a lot from a century or so of largely 'blind sampling' by equipment such as trawls and seabed corers (which are still fine for answering some questions in some areas), we now often require more detailed sampling and surveying, using deep-sea vehicles, to answer further questions."