Much fanfare accompanied the Sept. 25, 2010, launch of the Air Force’s Space Based Space Surveillance satellite.
The $833 million craft was finally going up to do its job: monitor orbiting items from space itself, free of the time constraints and atmospheric interference that hamper its earthbound counterpart, the Space Fence.
Its 30-centimeter telescope, mounted on a two-axis gimbal, would help keep tabs on satellites as far away as geosynchronous orbit as well as thousands of bits of space junk closer in.
The builders said SBSS would be on the job within 60 days, and forecast a working life of at least 5½ years.

Shortly after launch, the satellite passed over the South Atlantic, and things went awry.
The satellite was hit by radiation that sent the sensors reeling and knocked out an electronics board payload.
Suddenly, the expensive, specially-designed satellite could no longer do what it was built for.

The effects of radiation are part of the price of doing business in space.
There are solar flares, random magnetic distortions and what some NASA scientists call euphemistically the “killer electrons” of the Van Allen radiation belts.
The place where spacecraft are most vulnerable, though, is an area slightly larger than the United States, centered 300 kilometers off the coast of Brazil, where the trapped charged particles of the doughnut-shaped Van Allen radiation belts and cosmic rays from sun storms combine and bottom out at about 200 kilometers above the planet.
Its formal name is the South Atlantic Anomaly, but some call it the Bermuda Triangle of space.

These two nearly identical spacecraft launched in August 2012 and with only six months in operation, they may well be rewriting science textbooks. The probes study the Van Allen belts, gigantic radiation belts surrounding Earth, which can swell dramatically in response to incoming energy from the sun, engulfing satellites and spacecraft and creating potential threats to manned space flight.
James Van Allen discovered the radiation belts during the 1958 launch of the first successful U.S. satellite. Subsequent missions have observed parts of the belts, but what causes the dynamic variation in the region has remained something of a mystery.

It’s directly in the path of satellites in low Earth orbit, which fly through it regularly — in some cases, multiple times a day.
“The South Atlantic Anomaly is the rocky road of radiation storms,” said Vic Scuderi, manager of satellite electronics at BAE Systems in Manassas, Va.

All they know is that radiation in the South Atlantic Anomaly is intense, that spacecraft have to be designed to deal with it and that, even then, there is potential for peril.

Scientists have a working theory that the Earth’s magnetic field is caused by its molten iron center.
Because that core rotates at a slightly different pace than the planet’s surface, the field generates magnetic North and South poles slightly away from the geographic poles that form the Earth’s rotational axis. 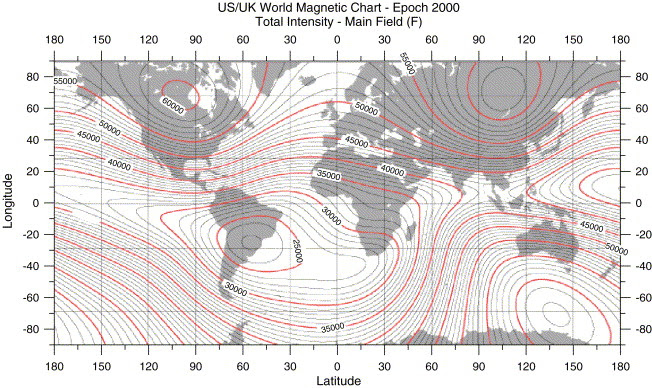 That’s the explanation for something even every hiker knows: that the magnetic north shown on a compass is not true north.
That offset also is believed to be the reason that the Earth’s magnetic field is weakest in the area off Brazil.
Less hindered, the inner Van Allen radiation belt dips closest to Earth there.

The anomaly was discovered in 1958 as part of a study of space radiation belts by University of Iowa physicist James Van Allen, whose suspicion was aroused by the Soviet Union’s Sputnik satellites. Soviet scientists believed the primitive data-recording device on board Sputnik I was faulty because it told of radiation levels well beyond anything they believed possible.

But Van Allen postulated that the device was fine and that the inexplicable radiation did indeed exist. Four months after Sputnik went up, the U.S. launched its first satellite, Explorer I, and Van Allen began to investigate the radiation belts that today bear his name.

In the 1960s and early ’70s, the Air Force and NASA flew a covey of 22 satellites to map the Van Allen radiation belts between altitudes of 200 and 36,000 kilometers.
The flights generated databases that are still in use today.

On Aug. 30, NASA launched its Radiation Belt Storm Probes (later renamed Van Allen Probes), twin satellites on a two-year mission to do more mapping and to update those databases.
Shielded by quarter-inch aluminum, the sensors are flying into the radiation belts for long periods, trying to solve a puzzle.
Sometimes, when solar storms hit the belts, they fill with energetic particles, the so-called “killer electrons.”
At other times, the belts lose particles.
And sometimes nothing at all happens.

“The problem is, there is no unified idea of what phenomena are most important inside the belts,” said mission scientist David Sibeck.
“If there are 100 people at a [scientific] meeting, there will be 100 answers for every question: ‘How are ‘killer electrons’ energized?’ “

The Space Based Space Surveillance satellite that was bashed so badly in 2010 was eventually brought back to life.
A software patch was developed and tested over the course of more than a year, and the SBSS was declared operationally capable 23 months after launch.
SBSS builders Boeing and Ball Aerospace referred questions to the Air Force, which did not respond by press time.
The satellites’ fate illustrates the problems the South Atlantic Anomaly can cause even to the most well-planned ISR missions.

Tom Logsdon, a former Rockwell Collins engineer, now retired, explained that the radiation can confound the very heart of the software on a satellite.
“One of the things that happens is, you can get logic upsets,” Logsdon said.
“You get a charged particle coming through the satellite, and it can flip some of the binary ones to binary zeros, and vice versa.
“Someone would have to upload the memory again or command it to reset, and it would start all over.”

Not every satellite damaged by the Anomaly takes so long to fix.
In October, the SpaceX Dragon, part of a $1 billion contract with NASA to supply the International Space Station, suffered a single-event upset en route to docking with the ISS.
A remote electronic unit became inoperable as the craft passed through the South Atlantic Anomaly.
A quick power cycle and re-synching remedied the issue.

Other programs work around the Anomaly.
To avoid exposing astronauts to intense radiation, spacewalks are not scheduled on the International Space Station when it’s passing through the Anomaly — which happens two to five times a day.

As a precaution, NASA engineers simply shut down the Hubble Telescope as it is going through the SAA, to protect its equipment.
Smaller commercial and military satellites carry radiation detection devices — themselves vulnerable to radiation — that trigger shutdowns and power-ups of sensors and computers.

Satellites carry radiation-hardened electronics of varying degrees to deal with the energy that accumulates.
“Commercial and defense-contracted satellites are typically on a 15-year mission timeframe, and they have to withstand hammering the whole time,” BAE’s Scuderi said.
“The electronics that we put on board the satellites can accumulate up to 500,000 rads” or radiation absorbed doses.

“A human being can only absorb about 400 rads in a lifetime,” he said, by way of comparison.
That accumulative effect is called a “total ionizing dose,” and it’s largely predictable, in part because orbital trips through the SAA are predictable.
As the ions pile up, the satellite can become impaired.
“Solar arrays become less efficient,” Logsdon said. “Silicon solar cells get damaged, so they generate less electricity.” 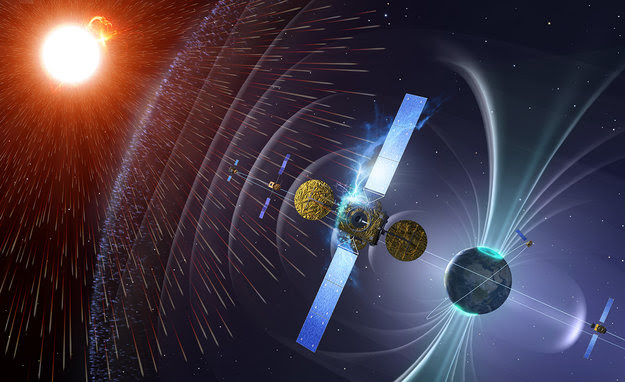 No escape from radiation

On March 8, 2012, a flurry of eruptions on the sun began sending enough energy into the Earth’s upper atmosphere to power every home in New York City for two years.
Over three days, 26 billion kilowatt-hours pounded the thermosphere, which begins about 53 miles up.
Infrared radiation from the thermosphere’s carbon dioxide and nitrous oxide re-radiated about 95 percent of that energy back into space.
Some satellites orbiting Earth were hit going and coming by radiation that, NASA assessed, would cut their lives short.
And there are more storms ahead because, this year, the planet reaches the apex of an 11-year solar event cycle.

Around the world, a satellite is launched about every four days with varying radiation mitigation capability, generally dictated by its budget.
While the day-to-day radiation in the South Atlantic Anomaly and throughout the Van Allen radiation belts can be anticipated, the inability to predict solar storms makes the jobs of designers and operators more difficult.
With more notice, operators could do things like shut down equipment to lessen vulnerability.

But they understand the problem.
“We can’t produce an accurate forecast for rain here on Earth more than three days ahead,” Scuderi said.
“The number of variables in space is probably 10 to 100 times more than on Earth.”

Still, NASA and NOAA try, albeit with diminishing funding and satellites that are wearing out.
The Radiation Belt Storm Probes twin-satellite mission is another in a long line of research efforts.
“We’ve spent a lot of resources trying to predict solar activity, but we’re still not there,” Badavi said.

A former DoD intelligence official said the South Atlantic Anomaly is just part of the ISR challenge.
“We’re just lucky,” he said, “there’s not a lot of demand for satellite imagery over the South Atlantic.”
Posted by Peio at 1:45 AM