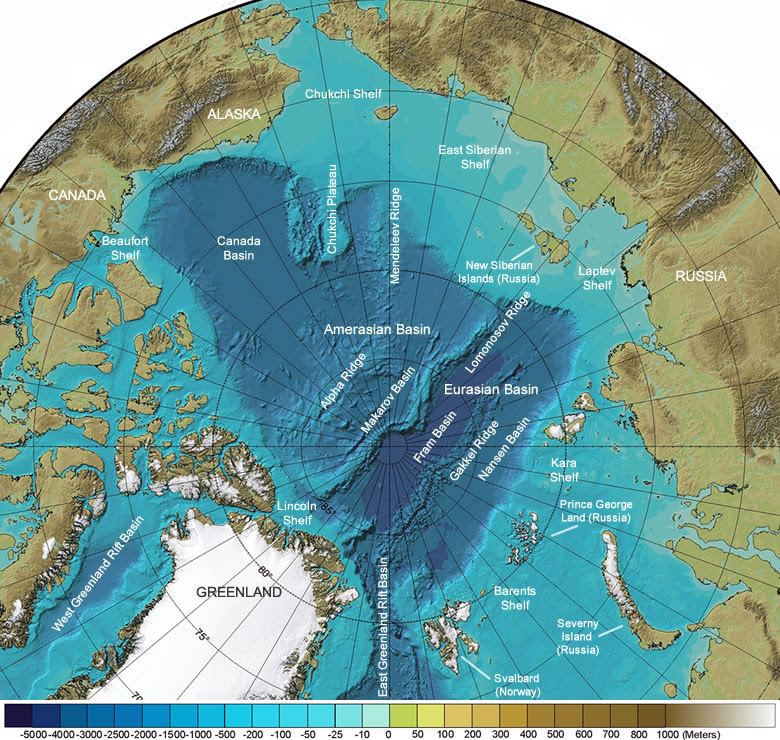 The Arctic Ocean has played a minor role in world history.
Ice cover severely hinders navigation; the area is remote; there is almost no infrastructure; winters are dark and very cold; summer days are short and foggy.
These challenges make the Arctic Ocean a hostile and difficult area.

Today, we are at a time when interest in the Arctic Ocean is growing steadily.
A warming climate is thinning and shrinking the polar ice pack to allow increased navigation.
New oil and gas assessments have revealed an enormous energy resource.
And, the Law of the Sea Treaty has motivated nations to clearly define their exclusive economic zone in the Arctic Ocean.

The new interest in the Arctic Ocean is not confined to its surface; it extends to the bottom where information about its structure is needed by geologists, oceanographers, biologists and other people who work there.
The primary physical features of the Arctic Ocean seafloor are labeled on the bathymetry map above and described in the paragraphs below.
Maps below illustrate navigational, physical and mineral resource features.

The Arctic Ocean has a surface area of about 14.056 million square kilometers (5.427 million square miles), making it the smallest of Earth's five oceans. Baffin Bay, Barents Sea, Beaufort Sea, Chukchi Sea, East Siberian Sea, Greenland Sea, Hudson Bay, Hudson Straight, Kara Sea, and Laptev Sea are generally considered to be part of the Arctic Ocean.
It is connected to the Pacific Ocean through the Bering Strait and connected to the Atlantic Ocean through the Labrador Sea and the Greenland Sea.

The dominant topographic feature of the Arctic Ocean seafloor is the Lomonosov Ridge.
This feature is thought to be part of the Eurasian continental crust that rifted from the Barents-Kara Sea margin and subsided in early Tertiary time (about 64 to 56 million years ago).
The side of the Ridge facing Eurasia is bounded by half-graben faults and the side facing North America is gently sloping.

The Lomonosov Ridge traverses the Arctic Ocean from the Lincoln Shelf (off Ellesmere Island and Greenland) to the New Siberian Islands off the coast of northern Russia.
It divides the Arctic Ocean into two major basins: the Eurasian Basin on the Eurasian side of the ridge and the Amerasian Basin on the North American Side.
It rises over 3000 meters above the floors of these basins and at its highest point is about 954 meters below sea level. It was discovered by Russian scientists in 1948.

In 1982 a United Nations treaty known as "The Law of the Sea" was presented. It addressed navigational rights, territorial waters limits, exclusive economic zones, fishing, pollution, drilling, mining, conservation and many other aspects of maritime activity.
It was the first attempt by the international community to establish a formal agreement on a logical allocation of ocean resources.
Under the Law of the Sea, each country receives exclusive economic rights to any natural resource that is present on or beneath the sea floor out to a distance of 200 nautical miles beyond their natural shorelines.
In addition to the 200 nautical mile economic zone, each country can extend its claim up to 350 nautical miles for those areas that can be proven to be an extension of that country's continental shelf.

Nations could use the "Law of the Sea" treaty to determine who owns the Arctic Ocean seafloor. Russia has presented a claim to the United Nations that the Lomonosov Ridge is an extension of Eurasia and that entitles Russia to an extended exclusive economic zone.
Canada and Denmark make similar claims to extend their control from the opposite side of the Arctic Ocean.

The Amerasian Basin and the Eurasian Basin are surrounded by extensive continental shelves. These include the Chukchi Shelf and the Beaufort Shelf along North America; the Lincoln Shelf along northern Greenland; the Barents Shelf, Kara Shelf, Laptev Shelf and East Siberian Shelf along Eurasia.

Navigation Through the Arctic Ocean 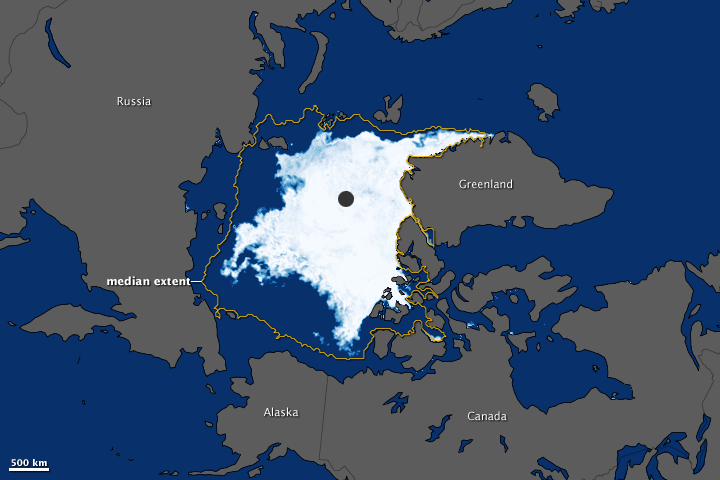 In September 2011, sea ice covering the Arctic Ocean declined to the second-lowest extent on record.
In this image, Ice-covered areas range in color from white (highest concentration) to light blue (lowest concentration).
Open water is dark blue, and land masses are gray.
The yellow outline shows the median minimum ice extent for 1979–2000 (areas that were at least 15 percent ice-covered in at least half the years between 1979 and 2000). Image and caption information by NASA's Earth Observatory
The Northwest Passage is a sea route that connects the Pacific Ocean to the Atlantic Ocean across the northern coast of North America and through the Canadian Arctic Archipelago.
The Northern Sea Route is a similar route that connects the Atlantic Ocean to the Pacific Ocean across the northern coast of the Eurasian Continent.

Map showing the geographic extent of the Arctic Ocean (as a darker blue tint).
The Northwest Passage and Northern Sea Route are two important seasonal waterways that connect the Atlantic and Pacific Oceans.
In recent years the polar ice pack has thinned allowing for increased navigation through these routes and raising the possibility of future sovereignty and shipping disputes among countries bordering the Arctic Ocean.
Image by the Central Intelligence Agency.
Both of these routes have been virtually impassable in the past because they are covered by thick, year-round sea ice.
However, they have been relatively ice-free for a few weeks in recent years (see map in right column) and have attracted a small amount of commercial shipping.
Each of these routes cuts thousands of miles off of a trip from the Atlantic to the Pacific.
Both routes face jurisdictional problems and questions over who has a right to use them and under what conditions.