A gray whale. A new paper from WCS (Wildlife Conservation Society), in partnership with researchers and practitioners from National Oceanic and Atmospheric Administration, U.S. Coast Guard, Space Quest, Google, and SkyTruth, reviews the use of a maritime vessel communication and navigational safety system that is not only effective in protecting people, but wildlife such as whales, walruses, and other wildlife species as well.
With improvements, say the authors, the system will ultimately result in greater engagement by vessel companies and operators in the conservation of marine resources.
Credit: (c) Ricardo Antunes

A new paper from WCS (Wildlife Conservation Society), in partnership with researchers and practitioners from National Oceanic and Atmospheric Administration, U.S. Coast Guard, Space Quest, Google, and SkyTruth, reviews the use of a maritime vessel communication and navigational safety system that is not only effective in protecting people, but wildlife such as whales, walruses, and other wildlife species as well.
With improvements, say the authors, the system will ultimately result in greater engagement by vessel companies and operators in the conservation of marine resources.

The Automatic Identification System—adopted by the International Maritime Organization in 2000 for use in collision avoidance, coastal surveillance, and traffic management— effectively accomplishes navigational safety goals, and provides pre-emptive maritime safety benefits.
The paper appears in a recent edition of Bulletin of Marine Science.
"AIS now provides a rich source of data to understand vessel traffic across the entire globe - even in the most remote areas of the open ocean," said Dr. Martin Robards, Director of WCS's Beringia Program.
"This system also has the potential to help us minimize the negative effects of shipping on wildlife."

"The AIS can become a vital tool in helping to protect whale and other marine mammal species, particularly in locations such as the Arctic where shipping is potentially on the increase," said Dr. Howard Rosenbaum, Director of WCS's Ocean Giants Program.
"AIS can be used to identify regions where shipping lanes and important marine mammal habitats and migrations overlap, as well as areas where ocean noise may be impacting acoustically sensitive species." 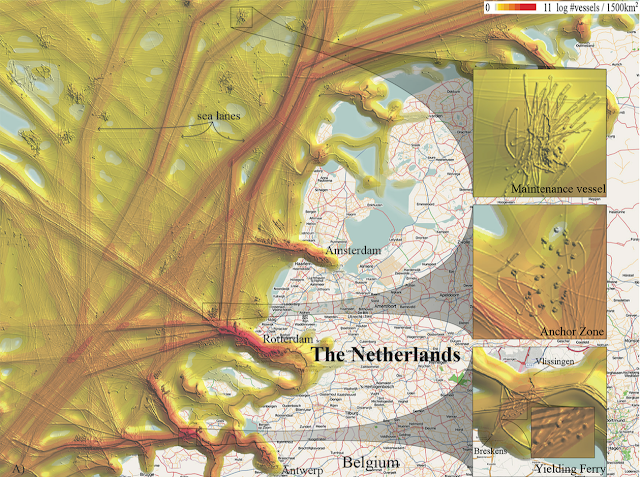 (A) Vessel density on the Dutch coast based on AIS data and attributes of vessel be- havior (reproduced from Willems et al. 2009 and used with permission).
Trajectories are for a week covering 160,000 km2.
The anchor zone and yielding ferry inserts are renderings of a day.

(B) Vessel density of a stormy day: northwest wind with force 8 on the Beaufort scale change the movement patterns of vessels entering and leaving Rotterdam.
(C) Vessel density of areas where vessels sail <3 kt during calm weather can be overlaid on shipping lanes to show areas of potential risk.

Understanding vessel traffic in relation to marine conservation is critical, particularly given that maritime transport accounts for approximately 90 percent of all world trade.
The continued development of maritime transportation around the world, especially in new areas such as the Arctic, can increase conservation impacts to wildlife, including disturbance, fatal strikes, introduction of pathogens through ballast water, habitat destruction through anchoring (especially on corals), introduction of invasive species, air emis¬sions, noise, and fuel spills.
AIS works by continuously transmitting messages containing details such as vessel identification, position, heading and other data to networks of receivers that track the information.
Increasingly, satellites are involved in receiving this signals on little cube satellites.
While little bigger than a bread box, these receivers can process up to 4 million messages a day and track up to 130,000 vessels at one time.

Though not designed as a conservation tool, the system data enables users to understand, and subsequently to design tools that help mitigate the impacts of maritime traffic on the marine environment and wildlife.
AIS data have important applications in conservation science including describing baseline vessel use of a maritime area, assessing or modeling actual or potential environmental impacts, and monitoring environmental compliance.
The authors cite the example of using AIS to establish areas where large cetaceans and vessels are likely to over¬lap in space and time—a critical step to understanding and reducing vessel strikes.
Using tagged whales off the Panama Canal, researchers demonstrated significant overlap between whales and vessels, and offered a preferred shipping route and vessel speed recommendations—similar to the well known example of North Atlantic right whale vessel conflict avoidance at the entrance to Boston Harbor.

Also referenced is underwater noise that can cause adverse effects to marine organisms.
AIS provides a tool for helping understand underwater soundscapes and identifying sources of acoustic noises that can be linked to decreased fisheries catches or disruptions to marine mammal behaviors and migrations.
But, say the authors, AIS's full potential as a conservation tool is yet to be tapped.
The system could be greatly enhanced by modifications that allow for more consistent and reliable data.
"You would not believe how many spellings there are for any one destination or origin for a vessel," added Robards. "Dutch Harbor had to have over a dozen different renditions, exacerbating the complexities of assessing vessel routes."

Satellite-AIS-based map of global ship traffic
Map of global ship traffic based on AIS signals detected from orbit.
Commercial vessels are mandated to transmit Automatic Identification System (AIS) signals, which are used to track maritime traffic – the oceangoing equivalent of air traffic control.
The system relies on VHF radio signals with a horizontal range of just 40 nautical miles (74 km), useful within coastal zones and on a ship-to-ship basis, but leaving open ocean traffic largely uncovered.
However, in 2010 ESA fitted an experimental antenna to Europe’s Columbus module of the International Space Station, demonstrating for the first time that AIS signals could also be detected from up in orbit, opening up the prospect of global ship tracking from space.

In addition, standardizing data processing and making data archives available through an international repository would cut analysis costs and promote collaboration, but would require significant efforts to bridge the gap between private industry who are providing the system and federal or research efforts looking to provide value added benefits such as conservation.
The authors make specific recommendations for improving existing applications for conservation use including improving coverage and reliability and usability of data to a wider group of users and improvement and expanded users.
"Effectively conserving our vast oceans will require technological leaps and cross-sectoral collaboration. This important review articulates the potential promise of both in the use of big data from vessel tracking systems such as AIS as well as local applications for critical habitat and threatened species," said Dr. Caleb McClennen, Executive Director of WCS's Marine Conservation Program.
"As increased ship traffic begins to congest an increasingly ice free Arctic, the conservation sector must capitalize on tools such as these to protect its currently pristine seas."

Fortunately, there are some exciting examples of progress, in Alaska for example, a Cooperative Research and Development Agreement between the Marine Exchange of Alaska and the Coast Guard R&D Center is leading to the use of AIS transmitters to develop the Next Generation Arctic Navigational Safety Information System.
To date environmental information and virtual aids to navigation have been transmitted via several of the Alaska AIS network.

"Conservation science and policy applications of the marine vessel automatic identification system (AIS)—a review," appears in the online edition of the Bulletin of Marine Science. Authors include MD Robards of WCS, GK Silber and JD Adams of Office of Protected Resources - NOAA Fisheries, J Arroyo of U.S. Coast Guard, D Lorenzini of Space Quest, K Schwehr of Google, and J Amos of SkyTruth.
Posted by geogarage at 1:21 AM