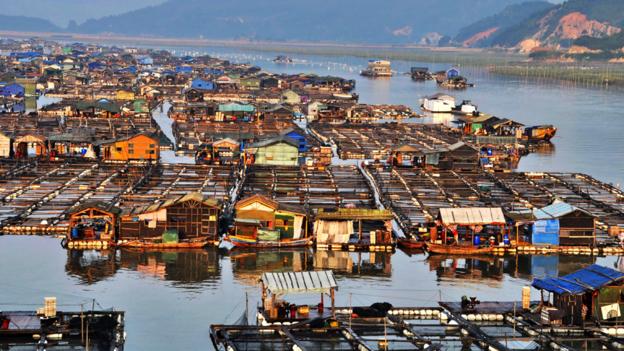 Village on the sea
Mankind has long sought shelter on the sea.
Members of China’s Tanka community have been living in villages based entirely on water
for more than 1,200 years.
(Rex Features)

From BBC (by Charlie Deist)

Life on the sea has been one of mankind’s enduring visions, but the technology hasn’t been up to the task... until now. Are we on the cusp of housing communities permanently on the ocean?


The 1995 film Waterworld was one of Hollywood’s most infamous budget busters – a mega-million-dollar post-apocalyptic thriller that, at the time, cost more than any other film ever made.
It did a pretty decent job of sinking Kevin Costner’s career for the rest of the decade.
More importantly, it may also have helped do the same to the idea of mankind living on the sea.

Though scientists aren’t predicting sea-level rises of the magnitude seen in Waterworld – hundreds of feet thanks to melting polar ice caps – we may have to plan for a world with much higher sea levels.
There has long been a dream that one day mankind, or at least some of us, will live on the ocean.
Designer and architect Buckminster Fuller saw cities at sea contributing to a sustainable future for humanity.
But then floating cities evoked images of flop films, or worse, of wealthy “robber barons” escaping to the high seas for financial reasons.
Now, several groups are trying to change this perception by researching technologies that could help create floating cities, or “seasteads”, which become innovative models of sustainability and peaceful cooperation.

Does this sound too futuristic?
Then consider China’s Fujian Province, where the Tanka people have been settled at sea since 700AD.
Pushed into coastal waters in wartime during the Tang Dynasty, these boat dwellers weren’t allowed to set foot on land until the second half of the 20th Century. Today, some 7,000 Tankas still maintain a sea farming life – possibly a preview of a future to come for many more of us.
Before the industrialisation of agriculture, most people lived in land-based villages no larger or more complex than the Tankas’ simple water-based community.
It took a series of green revolutions in farming technology to allow people to leave rural communities, and move into densely-populated urban areas.
We see signs that a “blue revolution” in ocean harvesting technology is underway, suggesting floating cities can’t be far off.

It may be a necessity – not merely a novelty – to inhabit the sea in the coming decades, but to do so will require the means to create reliable and sustainable food and power souces.
Dwindling fish stocks from overfishing have prompted humanity to create farmed supplies, beginning with the most accessible environments on or near land.
Yet most fish farming has not evolved beyond the low-tech cages and seaweed-draped lines anchored in shallow seas by ancient peoples like the Tankas.
The most advanced methods of mass production employ harmful antibiotics and genetically modified feed in unnaturally crowded ponds on land. 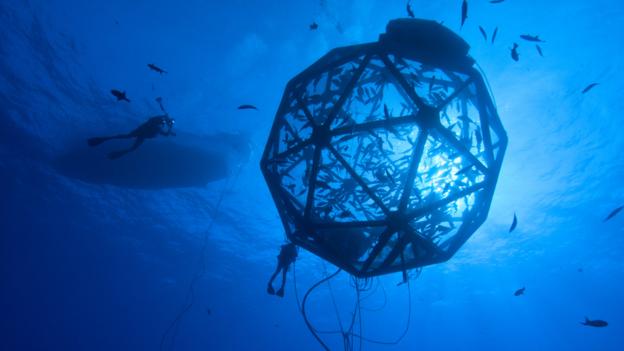 Farms on the current
Hawaii-based Kampachi Farms have created a fish cage that can be towed
and flushed clean by ocean currents, cutting down on pollution.

But the drawbacks of current fish farming has created opportunities for technology like the floating “drifter pens” pioneered by Kampachi Farms.
Given enough time, Kampachi Farms will replace stagnant ponds with GPS-tracked cages stitched out of copper wire to enable a constant inflow of fresh ocean water without flushing out the precious fish.
These geodesic aquariums, inspired by Fuller’s prototypes for sturdy light-weight structures, will be let loose in swirling ocean gyres, where they only need occasional course-correction to maintain a rough position.
This will be accomplished by nimble harvesting vessels driven by pioneers of this new life on the water.

Collapsing fisheries are of immediate concern, but land-based agriculture may also be in danger due to a predicted shortage of the crucial nutrient phosphorus by the year 2050.
Once again, there could be a solution out at sea.

Blue Revolution Hawaii, led by Professor Patrick Takahashi, is another group planning for a future with thousands of floating cities.
Takahashi and his team have devised a plan to enable large ships equipped with ocean thermal electric conversion, or Otec plants, in which warm surface waters interact with cold water “upwelled” from the deep ocean to drive a large power turbine.
The cool water pumped to the surface contains the exact ratio of nutrients – including phosphorus – needed to support plant growth.

Otec technology has already been tested in Hawaii, and China’s Reignwood group recently announced plans to complete a 10 megawatt plant – the first on the open-ocean – not far from the Fujian Province in China’s southern seas.
Living space may be cramped at first, but the abundant sunlight and acres surrounding these pods will be enough to feed vast ocean ranches, supercharged by Otec’s nutrient-rich byproduct.
At the bottom of this food chain, algae will feed fish, which feed bigger fish, which will in turn feed seafarers and land-lubbers alike.
Sinking fish waste and seaweed detritus will gradually sequester carbon dioxide from the atmosphere and deposit it on the seafloor to restart nature’s eons-long process of creating fossil fuels.
By 2050, it’s not far-fetched to imagine hundreds of these plants grazing the high seas, trading abundant seafood surpluses with cities on land. 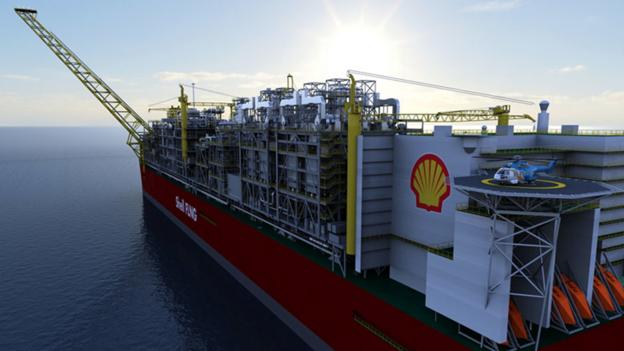 From rig to refuge
Shell is planning to build a massive floating structure, the Prelude Floating Liquefied Natural Gas facility, which could then be converted after gas is exploited.

Meanwhile, Shell is preparing to anchor the world’s largest floating offshore structure – the Prelude Floating Liquefied Natural Gas facility – off Australia’s north-west coast in 2014.
The structure will be massive – the length of four football fields and one field wide.
It will be built to withstand Category Five typhoons, and will produce the natural gas equivalent of 100,000 barrels of oil per day.
While few groups could afford to build a floating city capable of weathering such storms, Shell’s example demonstrates the long-lived feasibility of living on the sea.
In fact, most fundamental challenges of living safely on the ocean have been solved by offshore drilling or shipping companies (cruise lines got satellite internet years ago, while most of Asia and Africa still lack it).
Costs will fall over time.
And what is Shell going to do with Prelude once all the natural gas runs out?
The infrastructure for a marine community will be waiting to be used. 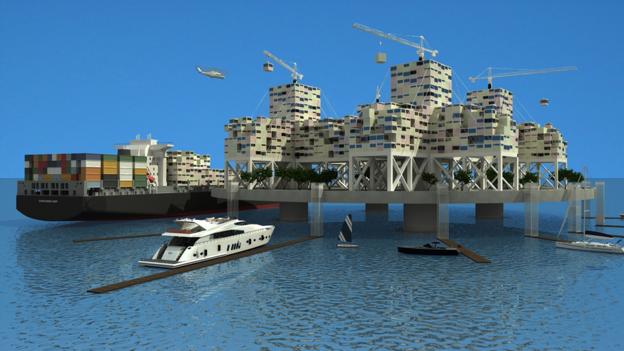 The Seasteading Institute has also been dealing with the challenges faced by communities trying to live permanently on the ocean.
It is an audacious but essentially pragmatic endeavour.
Taking a cue from the Tanka people, the plan is locate in the protected, territorial waters of a nation willing to “host” the structures and their inhabitants.
With help from the Dutch aquatic architecture firm DeltaSync, the institute hopes to design something that will meet the needs of residents, and the host nation.
From a calm coastal area, the logistical challenges needed allow a community to live on the high seas can be solved one at a time. 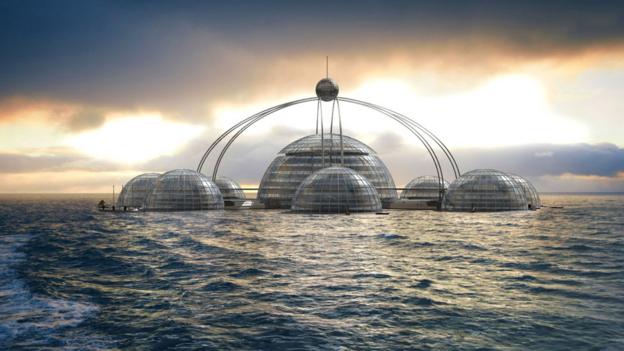 Floating concept
British designer Phil Pauley’s concept is of floating modules that can be rest on the surface in good weather – and submerge when conditions worsen.

British designer Phil Pauley has developed a concept for a sea habitat comprising interconnected spherical modules that could submerge during storms and rest at the surface in good weather.
The long vertical trusses holding up Pauley’s design use Fuller’s principles for strong, lightweight “tensegrity” structures.
They maximise support without using too much expensive material such as steel.
To reach much deeper waters, communities will ditch the stilts and float freely or anchor.
Others are trying investigating this technique on a smaller scale too.
Do-it-yourself sea-living enthusiast Vince Cate has been using prototyping simple “ball stead” homes, which achieve buoyancy and stable surface “real estate.”
Testing models in the Caribbean Sea, near his home in Anguilla, Cate has found that suspending a heavy weight well below the surface keeps the ball from moving amid the waves. 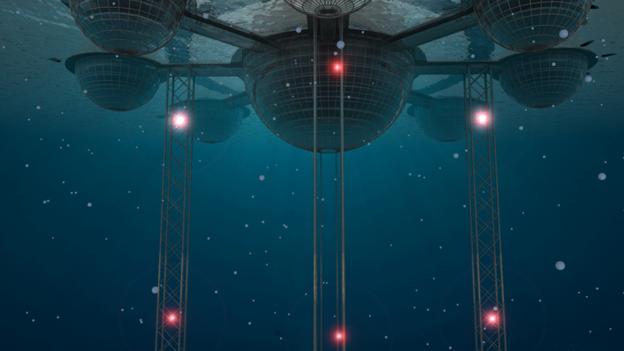 Light but strong
The modules use famed designer Buckminster Fuller’s idea of tensegrity – making strong but lightweight structures that use little in the way of steel.

And these structures could last for a very long time indeed.
Simple cement structures, reinforced with steel, can displace massive amounts of water, and last for decades - or even centuries.
Even after 2,000 years of the sea’s harsh beating, a Roman harbour built with a mixture of standard concrete and volcanic ash is still intact.
Electro-accretion – essentially sticking concrete-like minerals on galvanized underwater structures – means electrified steel mesh could eventually be used to reinforce and repair underwater concrete structures. 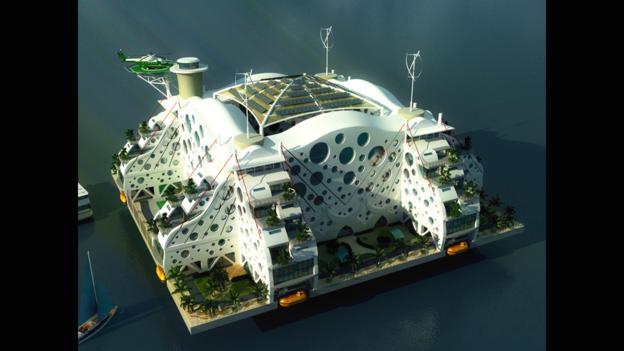 Luxury living
Some of the designs for ocean living resemble five-star hotels.
Life on the oceans may include all the creature comforts we expect.
(Andras Gyorfi/Seasteading Institute)

The first floating city is expected to take to the water around 2020.
We are already researching ways to harvest food and energy in deeper, more remote parts of the ocean. Future cities built from scratch will be more dynamic, energy-efficient and flexible.
These cities of the sea could use algal biofuel production and store energy from wind and the Sun.
As designs improve – and get cheaper – the idea of a home on the ocean will become more affordable.

Does all of this sound crazy?
In a sense, it is.
But some would prefer to be called crazy than to pretend our cities and species can keep going with the status quo.