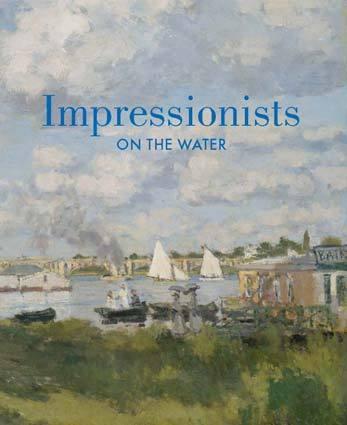 IMPRESSIONISTS ON THE WATER

Did you know that 85% of Impressionists had sailor, yachtsman or boat designer on their résumé? This nautical background, not often explored, inspired the many water scenes celebrated in a new book and related exhibition.

The new publication IMPRESSIONISTS ON THE WATER, coinciding with a major exhibition at the Legion of Honor organized by the Fine Arts Museums of San Francisco, traces the history of light-infused water scenes within the social context of the latter nineteenth century.

Water, boats, and all things nautical provided natural fodder for Impressionists, many of whom were sailors and yachtsman themselves—Pissarro had sailed the Atlantic several times, Bazille was as much a champion rower as a painter, though Manet, unfortunately failed twice in his goal to become a naval officer.

This catalogue reveals intriguing details behind key paintings from this period and includes a chronology of Gustave Caillebotte’s boating life, who was one of the movement’s forerunners and most proactive yachtsman.
Through essays by noted art historians, the book illuminates historical and cultural aspects of the nautical themes embraced by the Impressionists, including their connections to contemporary life such as the literature of Zola and Maupassant, leisure, and technology.


IMPRESSIONISTS ON THE WATER is a collection of works focused on rowing, yachting, and sailing, on rivers and on sea, while highlighting the boatyards, clubs, and many regattas frequented by the artists.
A brilliant synthesis of boating and aesthetics, this book will be cherished by coastal admirers, scholars, and connoisseurs of one of the most beloved periods in art history. One of the contributors, Phillip Dennis Cate, former director of the Jane Voorhees Zimmerli Art Museum in New Jersey, is a specialist in nineteenth-century French art.
Daniel Charles is a noted historian of innovation and technology, with a particular expertise in maritime history.
Christopher Lloyd, a specialist in the art of the Italian Renaissance, French Impressionism, and British painting, was a curator in the Department of Western Art at the Ashmolean Museum at Oxford University for twenty years before becoming Surveyor of the Queen’s Pictures from 1988–2005.

Impressionists on the Water, by Phillip Dennis Cate, Daniel Charles and Christopher Lloyd, will be released by Skira Rizzoli, in June 2013.

The exhibition opens at the Fine Arts Museums of San Francisco, Legion of Honor, San Francisco, California, from June 1-October 6, 2013, and travels to the Peabody Essex Museum, Salem, Massachusetts, from November 9, 2013-February 9, 2014.
Posted by Peio at 1:17 AM