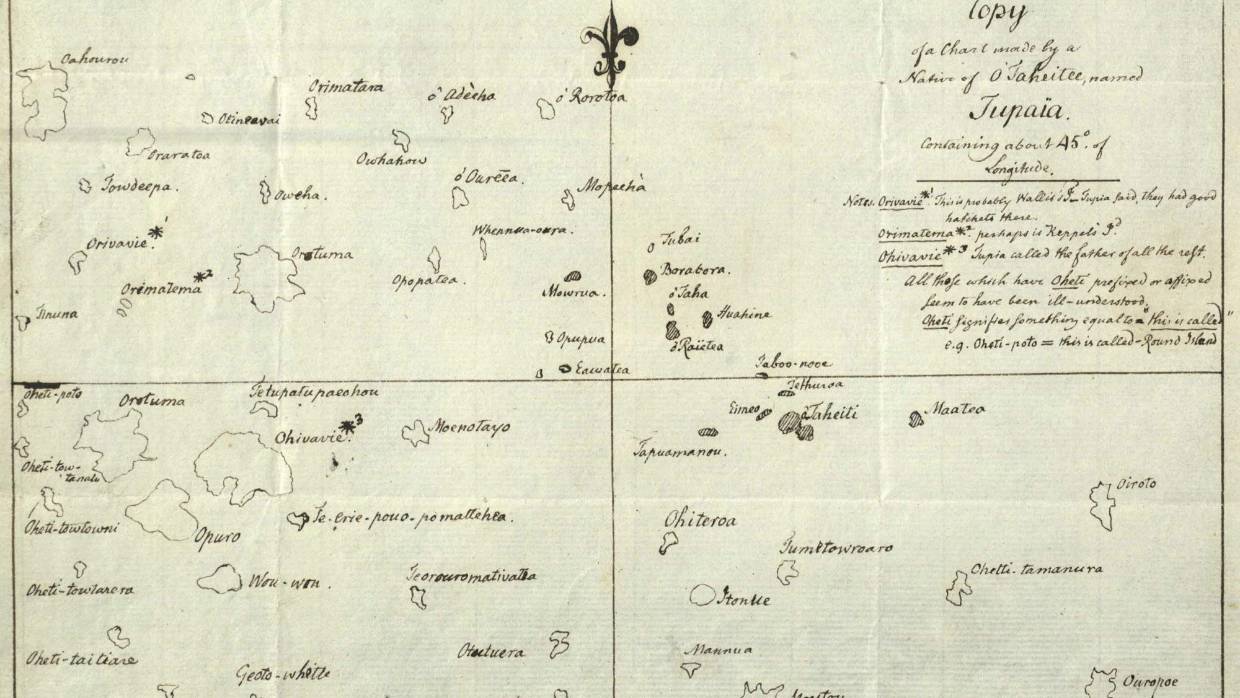 Tupaia's first draft map of the Pacific.
Copy of a Chart made by … Tupaïa’ by Georg Forster, 1776, Stadtarchiv Braunschweig
Tupaia used the centre of his map as north, or noon, and the readings from north changed depending on which island you were on.

From Stuff by Anana- Zaki

The secret of a "legendary" map has finally been unlocked.

After six years of research, two German professors believe Tahitian navigator Tupaia's map of the Pacific, once thought to be "unreadable," was "fully understandable".
And in another "breakthrough", the Potsdam University researchers, Lars Eckstein​ and Anja Schwarz,​ believe the map, co-produced by Captain James Cook, was completed when Cook's ship the Endeavour was anchored at Queen Charlotte Sound.
Schwarz said she "firmly believed" their views about the 248-year-old map, and they had evidence to back up their theories.

Cook joined the British merchant navy as a teenager and joined the Royal Navy in 1755.
He saw action.

Tupaia took part in Cook's first voyage as a navigator and translator, and was "highly regarded" by the Endeavour captain, and drew the map between 1769 and 1770, she said.
"This map was co-produced by many people including Cook, and although not very well known, has been written about in the past. It's usually been written about in two primary ways.
"One way was, Tupaia showing his knowledge of the Pacific. Another way it has been read is, Tupaia knew of these places but he didn't know where they were, and half of the places didn't exist and the names were all wrong," Schwarz said.
But for Schwarz and Eckstein, the map made "a lot of sense". 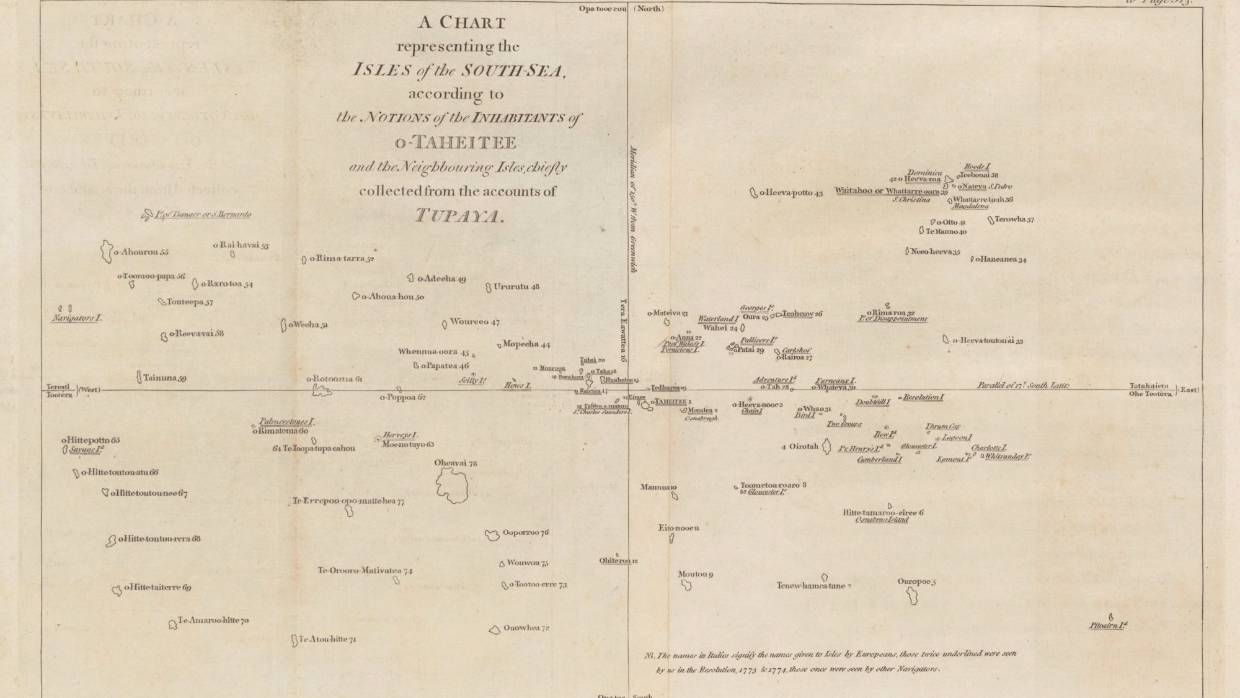 A reworked version of Tupaia's map, which numbers the islands in the order Cook and his crew visited them on their first voyage.

"It was meant to be read and we just had to figure out how to do it," Schwarz said.
To begin understanding the map, the researchers had to put their minds in the "Polynesian way of navigating".
According to Eckstein, when compared to Europeans, the Polynesians took a very different approach to travelling and mapping where they were in the world.

A replica of the Endeavour in Poverty Bay on the east coast of the North Island.

"Europeans abstract space, they objectivise it, externalise it and fix it. They then measure it with the invisible lines of latitude and longitude, measure where you are and then travel," he said.
Polynesians imagined a world where "people didn't move", but the "world moved around them", Eckstein said.
"If you know your bearings, the sea will throw out the island from the horizon and bring it to you. You see how completely opposite those kinds of world views are?

This is Tahitian high priest and navigator Tupaia’s only known drawing of New Zealand. A remastered drawing by Tupaia depicting an unknown Māori and naturalist Joseph Banks exchanging a crayfish and what is believed to be a tapa (bark) cloth.

"The idea with Polynesian navigators is that the world is not fixed, the world constantly moves," he said.

The beginning of Tupaia's map being drawn up was when the Endeavour left the Pacific Islands in search of Australia in 1769, after extensively touring the region with the help of the Tahitian.
"So they left that world, and that was the moment Cook said to Tupaia, 'you've told us about all those islands, why don't you draw a chart for us?'.
"This is how the story unfolds," Eckstein said.

An "important find" in the research was German explorer Georg Forster's copy of Tupaia's first draft map of the Pacific.
Forster took part in Cook's second voyage to the Pacific. 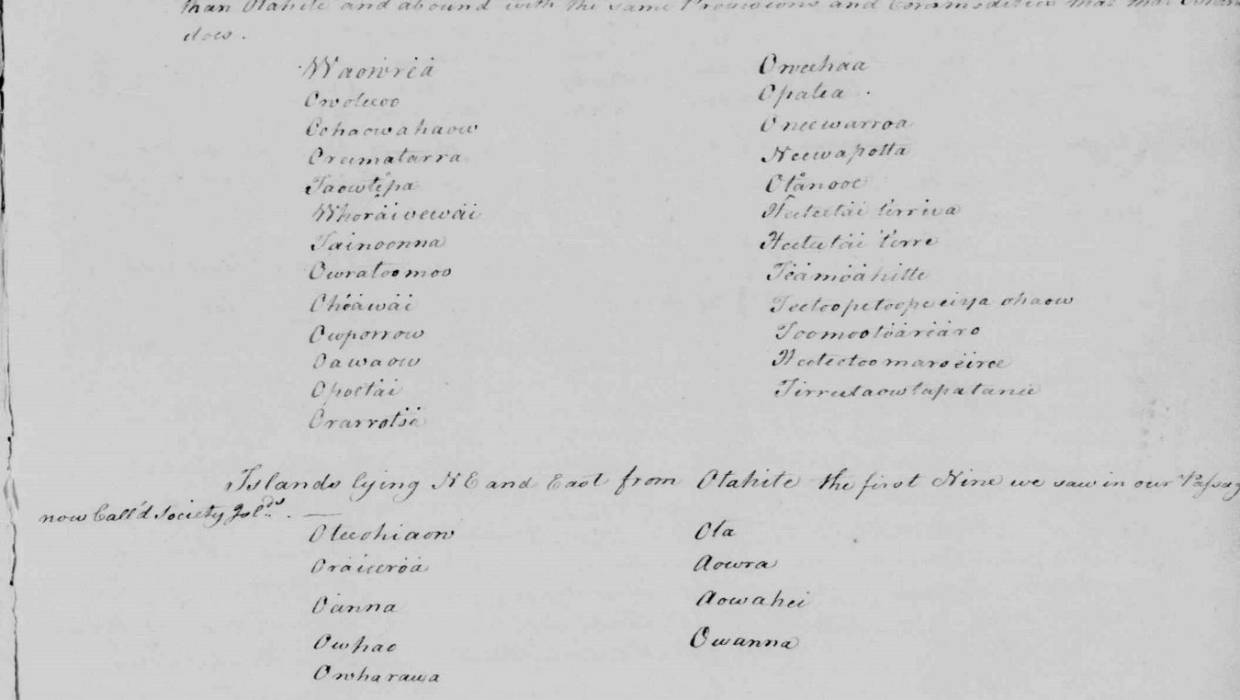 A list of Pacific Islands supplied by Tupaia in the order they were sighted by the Endeavour.
Robert Molyneux’s Master’s Log, National Archives Kew, London

He said Forster's copy "helped understand" how Tupaia's map began.
"What would have happened is, sitting around the drawing table in Cook's cabin aboard the Endeavour, the Europeans take out an empty sheet of paper, they drew the cardinal points and they would have indicated north, east, south, west.
"They begun by drawing all the islands that they had themselves seen on the first voyage in 1769," Eckstein said.

After the Endeavour officers added their own islands onto the map, they handed it over to Tupaia to complete, due to the Tahitian's extensive knowledge of the Pacific, he said. Voyaging paths on Tupaia’s Map, as shown on a Mercator Map of Oceania. 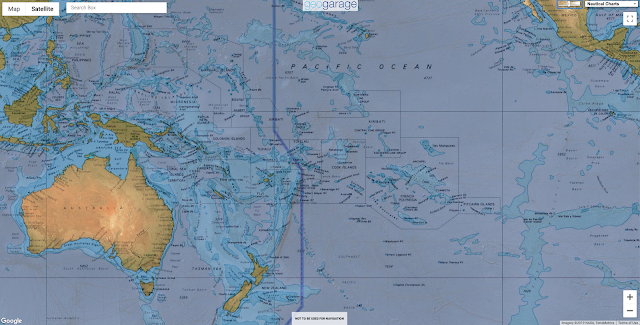 Mercator Map of Oceania with the GeoGarage platform (UKHO map)

But instead of following the European approach to navigation, Tupaia used the Polynesian method, Eckstein said.

The researchers first used a list of islands written down by Tupaia, which he listed in the order the Endeavour sighted them.
They then numbered the islands in that order, and translated the numbers onto Tupaia's map, and that was the "magic moment", Eckstein said.
"What seems to be chaotic, suddenly resolves into some form of order.
"So you can see the six, seven, eight, nine, something [is] happening there. There are sequences all over the map."

Why were the researchers so sure of this?
It was due to another "major discovery".

The discovery was around the word Avatea​, which appeared on the centre of the map.
"Avatea in Tahitian, according to the European vocabulary lists, means noon. Noon is marked by the pinnacle position of the sun in the daily course of the sun's movements.
"For some reason, Tupaia chose to place that word at the very centre of the map," Eckstein said.

The researchers believed that reason was due to a daily "ritual" on board the Endeavour, which happened at noon.
"Everyday at noon, all the officers had to report on deck, all the precious instruments like sextants would be brought on deck and checked.
"So Tupaia would have seen this everyday on board," Eckstein said.
That was how Avatea came about, he said.

Come with us on Cook's world-changing expeditions.
Trace their routes and find out the ambitious aims behind them.
Continue your journey into their impact and legacy on the British Library website.

Using the Polynesian approach to navigation, the researchers came up with the theory that every island on the map was in fact the centre, in Tupaia's view.
"From the centre, you can get your bearings by looking at noon.
"The European north was the noon [Avatea] on the map, and you could calculate the bearings by using the island and pointing to the map's centre," Eckstein said.
By using this technique, the map's bearings could be figured out, he said.
"If you want to go from Rarotonga and want to go to Tonga, you go west," Eckstein said.

But "unfortunately" for New Zealand, it was not included in the map.
However, the researchers believed the map was finished in the country, when Cook anchored at Ship Cove.
"We firmly believe this map was finished here in New Zealand and there are several indicators of that," Schwarz said. 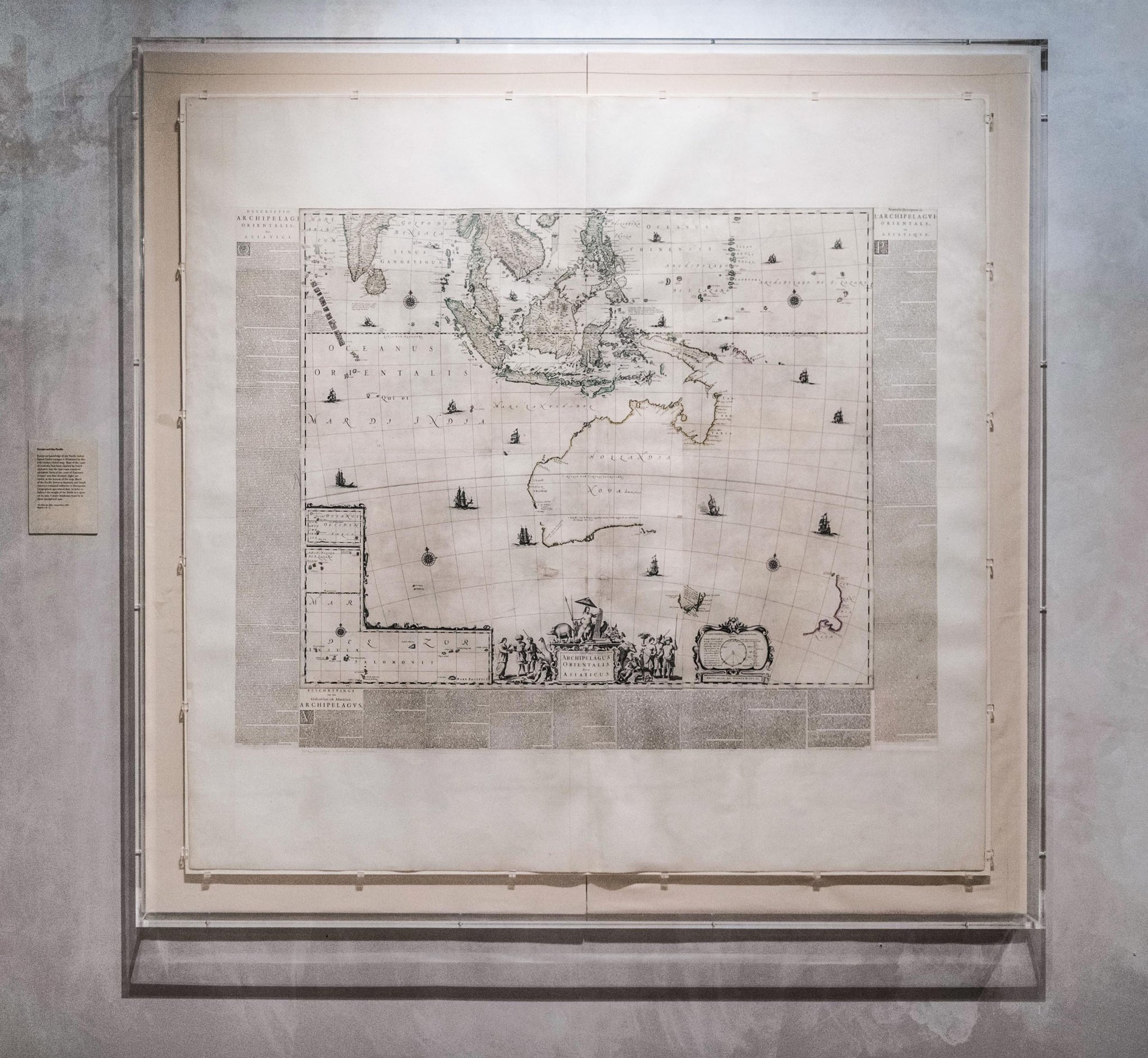 Created by Dutch explorers, this incredible map shows European knowledge of the Pacific
prior to Cook’s voyages in the 18th century.

In one of the copies of Cook's manuscripts, the admiralty copy, he listed islands sighted by Tupaia and the Endeavour, and he included a version of the map, which included New Zealand, Schwarz said. 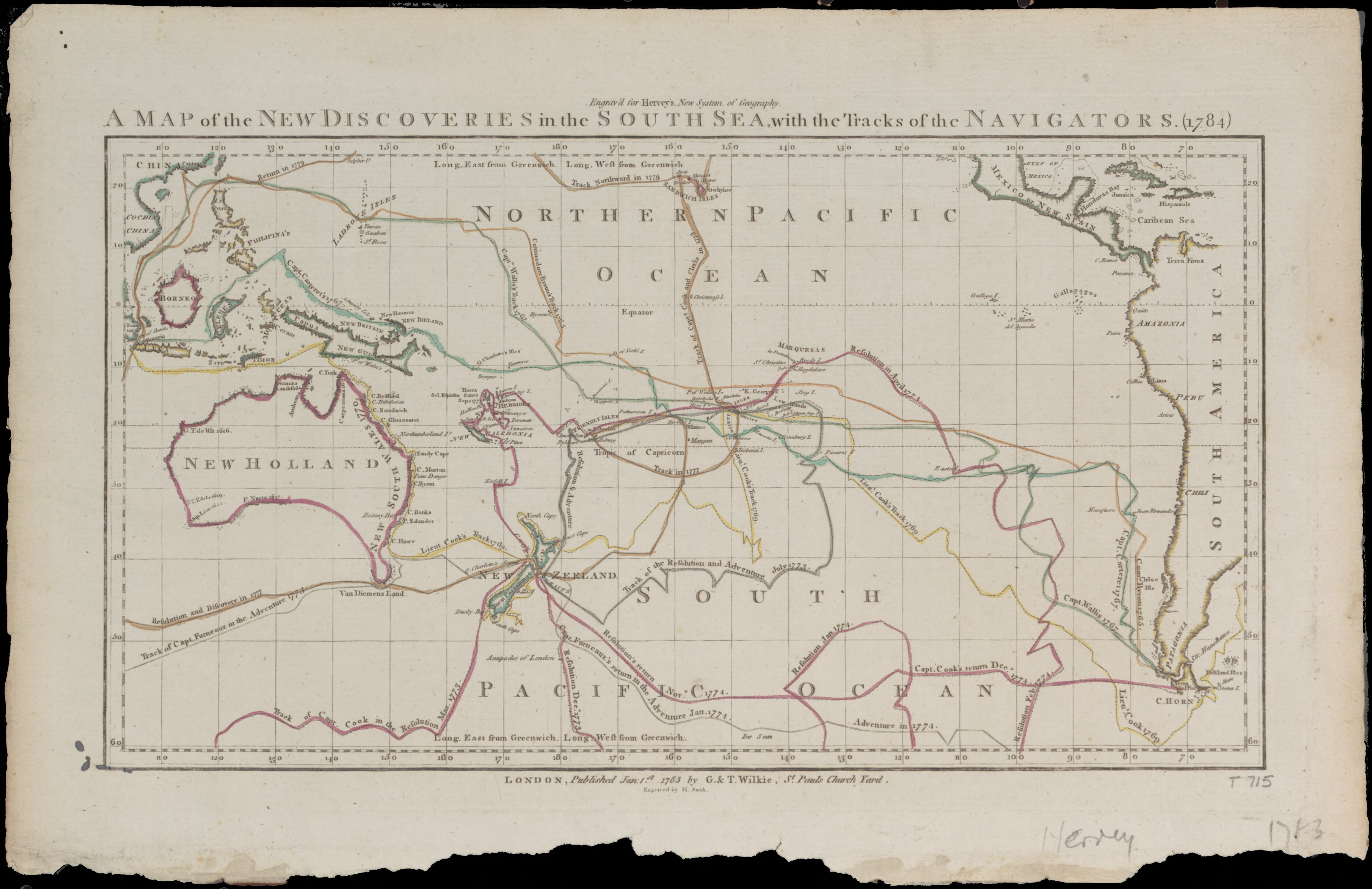 1784 map of the Pacific Ocean showing the routes of explorers 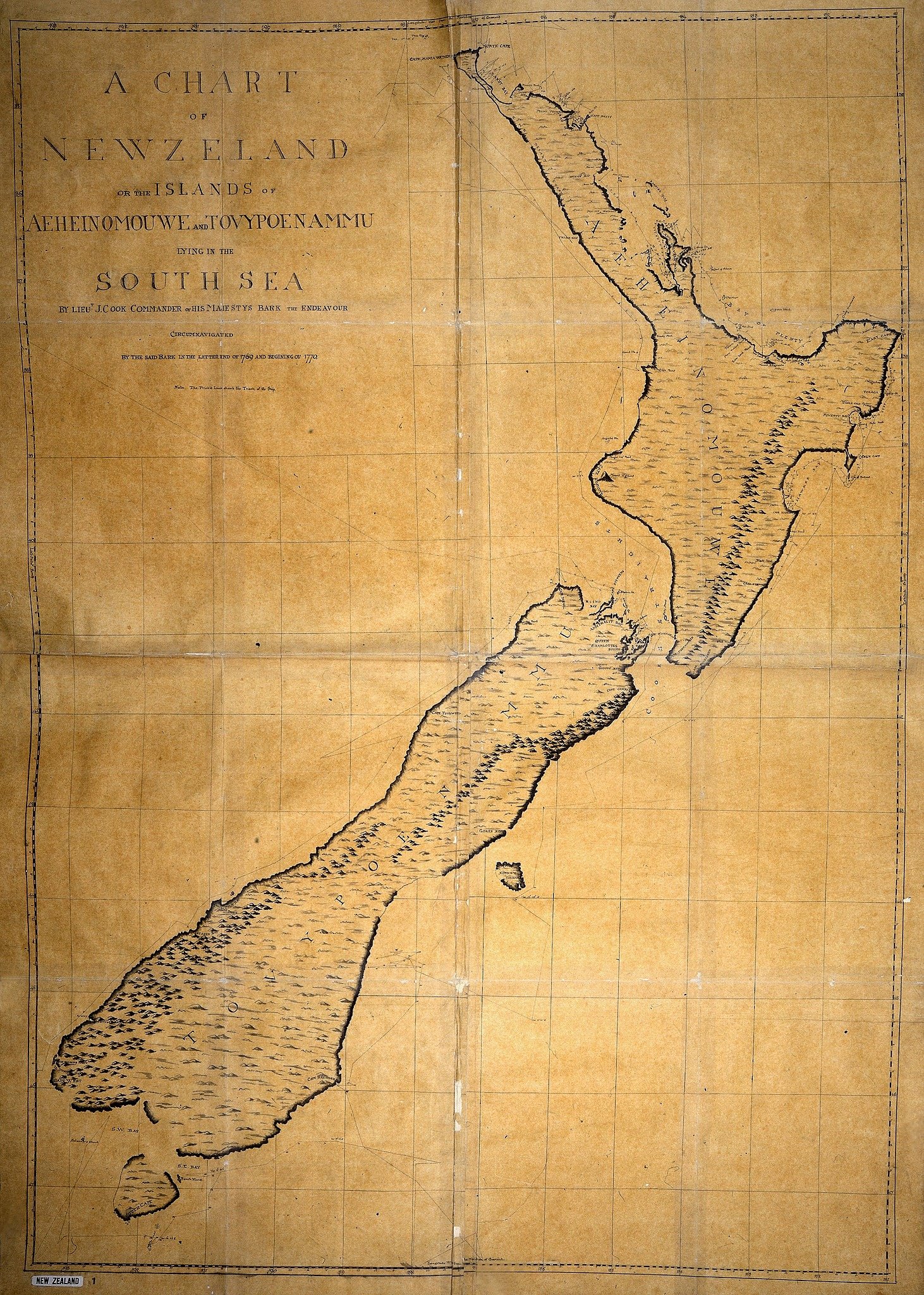 The researchers believed the manuscript with the map that included New Zealand was finished while the Endeavour was anchored in the Queen Charlotte Sound, because that was the only way Cook "would have had the time" to do so, Schwarz said.

But Eckstein and Schwarz said they were still researching the theory surrounding the last known location of where the map was finished, but they were "confident" in their theory.
The researchers toured New Zealand in February this year to present their findings and theories.