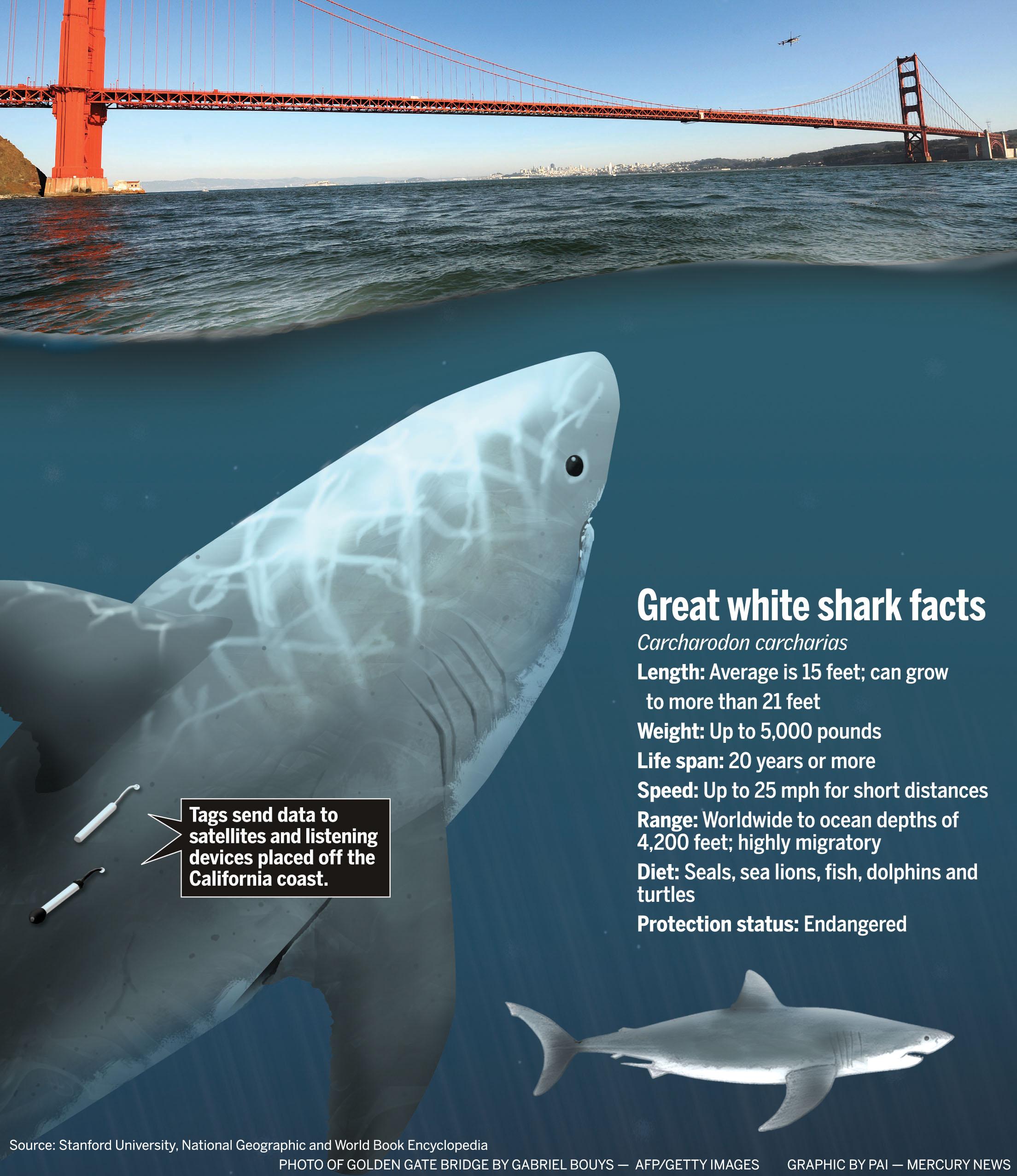 From MercuryNews by Paul Rogers

Windsurfers, fishing boats and cargo ships aren’t the only traffic in San Francisco Bay.
Great white sharks are there sometimes, too.

In what is believed to be the first scientific confirmation of white sharks in San Francisco Bay, researchers from Stanford University, the University of California-Davis and other organizations put satellite and acoustic tags on 179 white sharks in Northern California waters from 2000 to 2008.
They found that most of the sharks migrated thousands of miles every year, from California to as far away as Hawaii, and five swam underneath the Golden Gate Bridge in 2007 and 2008 and into bay waters.

It isn’t known exactly where the sharks went once in the bay, only that their acoustic tags were detected by receivers anchored to the bay floor between the Golden Gate Bridge and Alcatraz Island. 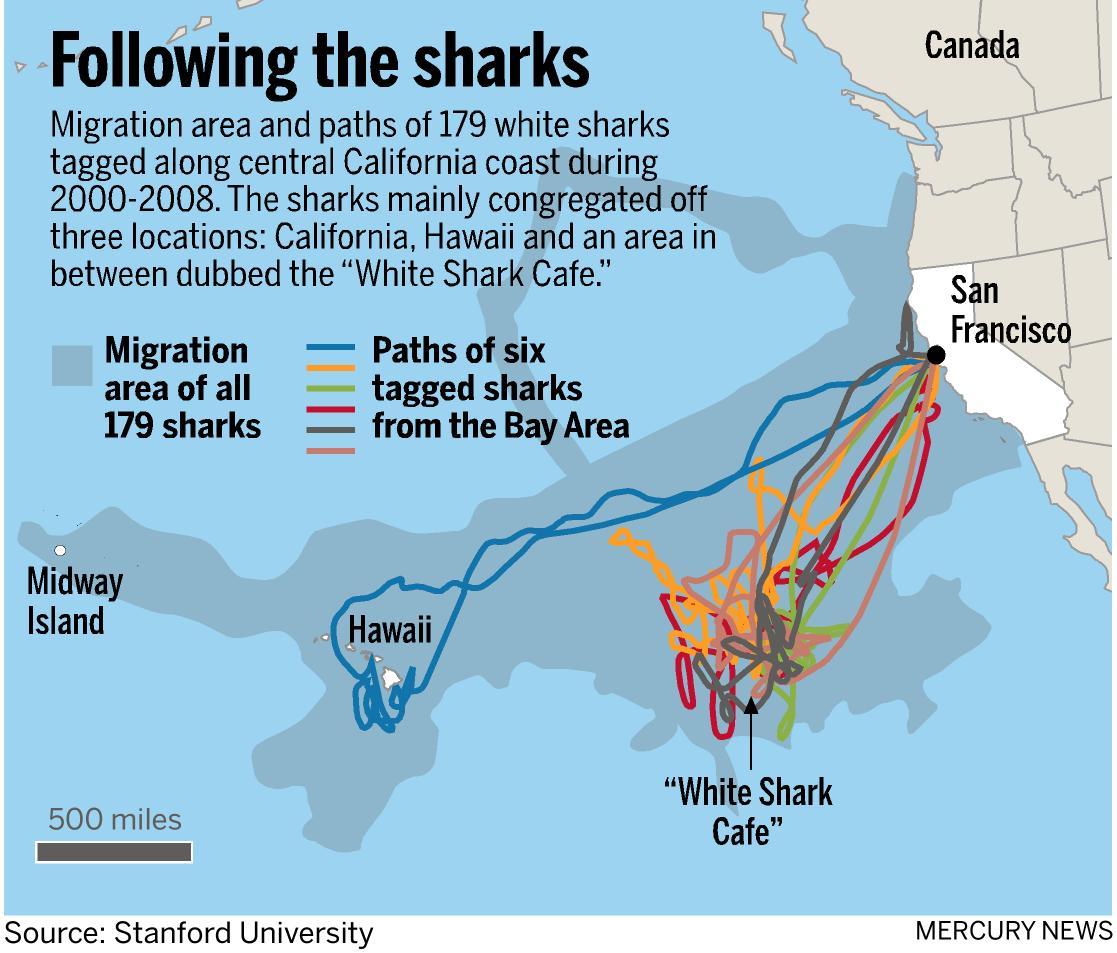 “All we know so far is that they are poking their heads across the Golden Gate,” said Barbara Block, a professor of biology at Stanford’s Hopkins Marine Station in Pacific Grove who helped lead the tagging study.
“I doubt they are coming in very far because they are salt water animals.”

There are nearly a dozen species of sharks known to live in the bay, including leopard, sevengill and other, mostly docile bottom-dwelling varieties.
Researchers have wondered for years whether great whites — apex ocean predators that can reach 15 feet long or more and weigh 4,000 pounds — are there too.
But there have been no documented cases of white sharks ever attacking seals, sea lions or other animals in the bay, let alone people, said John McCosker, a veteran shark researcher at the California Academy of Sciences.

Contrary to sensationalism from Hollywood films, attacks by white sharks are rare.
Far more people die each year from dog bites or hitting deer with cars.
Since 1952, there have been 99 white shark attacks in all of California, according to McCosker’s records, and 10 fatalities.
Most were surfers or divers in places where elephant seals and sea lions — some of the white sharks’ primary prey — are frequent.

The only documented white shark fatality in San Francisco came on May 7, 1959, when Albert Kogler Jr., 18, died while swimming in less than 15 feet of water after he was attacked off Baker Beach, about one mile west of the Golden Gate Bridge.

The president of one prominent swimming club said Tuesday that the news that white sharks occasionally come into the bay is interesting, but not that surprising.
“The conventional wisdom has always been that they don’t come beyond the bridge.
I don’t think I ever believed it,” said Ken Coren, president of the Dolphin Club, in San Francisco.

Coren, an open water swimmer for more than 25 years, said bay swimmers think about sharks, but know the risk is very low.
He said he doesn’t think the news will scare many swimmers from their usual routines.
“The most deadly thing we face are propellers,” he said.

In it, scientists used high-tech acoustic tags to find that white sharks display amazingly precise migration patterns.
They are most numerous off Northern and Central California between September and November, and almost all gone from April to July.

When the sharks leave each spring, satellite tags show, they swim as far as Midway Island and Hawaii, but also mass in large numbers in an area of open ocean between Hawaii and Baja California known as “the White Shark Café,” where researchers believe they may mate and forage for food.
In the fall, they return back to the same places they left a year earlier.

“We tend to think of white sharks as animals that wander oceans aimlessly,” said Block.
“What we’re learning is how selective a predator they are.
The go up to 4,000 miles in a trip and come back to within half a mile of where they left.”

It isn’t known how white sharks navigate, although their ability to sense electromagnetic energy in the ocean may play a role.

The researchers also found by taking DNA samples that white sharks in Northern California are a genetically distinct population from other groups of white sharks in the world, such as Australia and South Africa, and that they may have descended from Australian great whites 200,000 years ago.

Salvador Jorgensen, a postdoctoral researcher at Stanford who is the lead author on the study, said that having tagging data could in the future help better inform the public around the world about white shark behavior, reducing the risk of encounters.
It may also help researchers one day get a population estimate for great whites, whose numbers are believed to be on the decline.