Plastic swallowed by albatrosses in the Pacific ocean
Hawaii: Message in the Waves - BBC


About 90% of seabirds have eaten plastic and are likely to retain some in their gut, a new analysis estimates.
The study concludes that matters will only get worse until action is taken to stem the flow of waste to the oceans.
Researcher Erik Van Sebille says the oceans are now filled with plastic and it is "virtually certain" that any dead seabird found in 2050 "will have a bit of plastic in its stomach".
Dr Van Sebille and his colleagues report their work in the journal PNAS.
On one level, the analysis is shocking, but on another, its findings seem depressingly familiar.
Numerous studies have now catalogued the rising mass of plastic debris being dumped, blown or simply washed out to sea; and it is having a deleterious impact on the marine environment.
To the foraging bird, a discarded plastic cigarette lighter or a shiny bottle top can look like a fish.
If ingested, this litter may simply stay in the gut, unable to pass through, putting the animal's health at risk.
As more and more plastic waste finds its way into the oceans - about eight million tonnes a year in one recent estimate - so the hazards to wildlife increase.


Midway Island is an uninhabited island about 2000 km from any other coast line.
It lies roughly equidistant between North America and Asia, and almost halfway around the world from England.

In their PNAS paper, the Australian and UK scientists reviewed decades of peer-reviewed literature to trace the evolution of seabirds' exposure to plastic debris.
Back in 1960, the data showed that maybe fewer than 5% of birds would be found with waste fragments in their stomach.
Today, this figure is roughly 90%.
And, on current trends, by 2050, the team predicts that plastic ingestion will touch 99% of the world's seabird species, with nearly every individual affected.
"Plastic in seabirds is ubiquitous, and it's increasing," study leader Chris Wilcox from CSIRO, Australia's federal research agency, told BBC News.
To get to its 2050 extrapolation, the team had to understand the hotspots of risk, by overlaying the known foraging behaviour of the world's 400 or so seabird species on to the known distribution of plastic waste at sea. 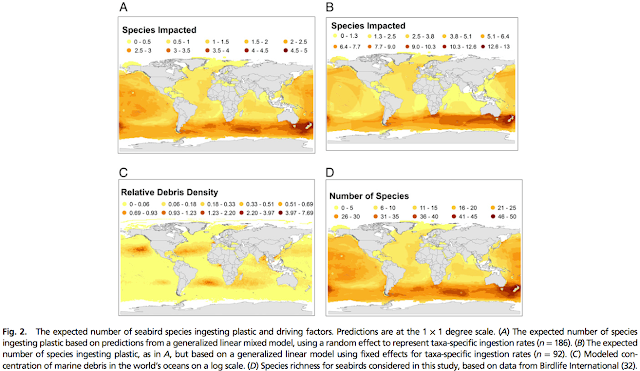 This approach demonstrated that the regions of highest risk are not where most floating plastic congregates, which is in the centres of the great ocean gyres, sometimes dubbed "garbage patches" or "islands" for the way the debris just goes round and round.
Rather, the zones of highest concern are where most seabirds are found, which is in a band in the Southern Ocean, near Australia, South Africa and South America.
Once thought of as having pristine waters, this region is now sufficiently polluted to ensure a great array of species encounters some waste.
"A pristine ocean doesn't exist anymore," said Dr Van Sebille, who is affiliated to Imperial College London.
"Every ocean is now filled with plastic. Some have more than others, but what we found is that even the oceans that are not known for their plastic - they still have quite a bit of plastic and they can be where the harm is really done just because that's where all the birds live."

Open up any dead bird, and most are likely to contain plastic fragments

Another key finding from the research is that the problem really is solvable.
If only the stream of plastic waste getting into the oceans can be shut off, then seabirds have the capacity to recover quite quickly.
Dr Wilcox explained: "Because exposure to plastic turns out to be a strong predictor of how much plastic the birds have in them; that is, the more plastic they're exposed to, the more they ingest - this implies that if we reduce the amount of plastic going into the oceans, you would expect all these species to essentially respond.
"And this makes this problem different from something like climate change. It ought to be relatively easy to fix."
Jenna Jambeck from the University of Georgia, US, is an expert on plastic waste issues.
She was not involved in the study but said it had eloquently made the link between solid waste management practices on land, the plastic input into the oceans, and the impacts being felt by seabirds globally.
"It illustrates that if we implement solutions to reduce plastic input into the oceans, we can reduce impacts to individual seabirds.
"Solutions include improving solid waste management where it is lacking, and also working upstream on product redesign and materials substitution moving towards a more circular system," she told BBC News.

This is a solvable problem, say the scientists: Just shut off the waste stream